The 2022 Caltech Space Challenge—to Titan and Back

Titan, Saturn's largest moon, is the only planetary body in our solar system besides Earth where there is clear evidence of surface liquid. This is an essential element to life as we know it and makes Titan a prime target in the search for extraterrestrial life.

Named after Christiaan Huygens, the Dutch astronomer who discovered Titan in 1655, the Huygens space probe successfully landed on Titan in 2005. However, no instruments existed in 2005 that could capture and return a sample of Titan's surface composition back to Earth. This is the basis for the 2022 Caltech Space Challenge, which took place from March 21–25 on the Caltech campus. Two teams of 16 space exploration enthusiasts, including five Caltech students along with university students from around the globe, were given five days to design an autonomous mission to collect three different samples from Titan. The teams also needed to safely contain those samples for the ascent off Titan and then bring those samples back to Earth. As the teams designed and modified their concepts throughout the week, mentors from JPL and Caltech provided essential support and guidance.

The two teams, appropriately named Voyager and Explorer, first met the Sunday before the challenge officially began. While all the participants knew the challenge involved a mission to Titan, the full scope of the challenge remained a secret. After listening to an inspiring speech by then-JPL interim director Lt. Gen. Larry D. James USAF (Ret.), the challenge participants learned they would not only need to obtain and return a single sample from Titan, but they would also need to collect and return three distinct samples from Titan's surface.

Although designing and presenting a flagship sample-return mission in less than a week is no easy task, "the real challenge is teamwork," says Nigel Angold, a mentor in this year's challenge whose experience includes operations management for NASA and European Space Agency missions. Angold mentors the participants in teamwork and team building, and he has been a mentor for every iteration of the Caltech Space Challenge since its inception in 2011. As the teams wrestled with their mission concepts and proposals throughout the week, Angold was a ubiquitous figure, weaving in and out of the teams' base camps to share his expertise and insight. The appreciation for Angold's team-building wisdom was clear, as enthusiastic shouts of "Nigel! Nigel!" could be heard from challenge participants throughout the closing ceremony. 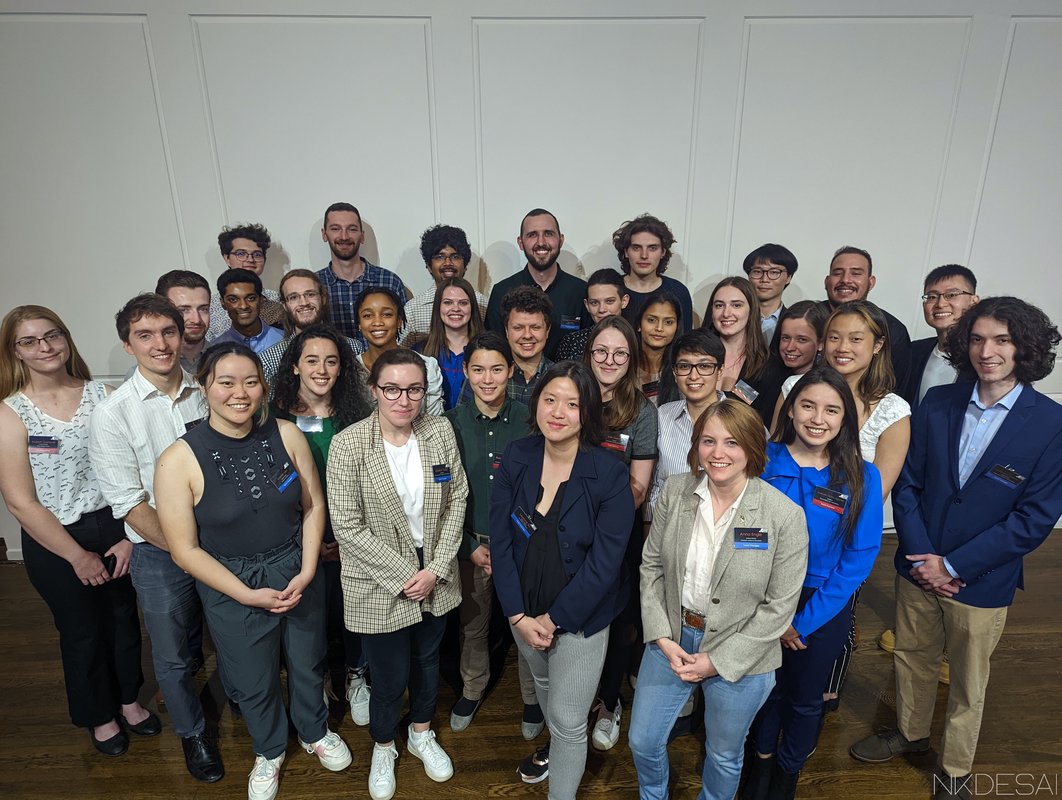 Caltech GALCIT graduate students Liam Heidt and Josefine Graebener ran and organized this year's Space Challenge from start to finish. Heidt and Graebener, both international graduate students, were responsible for designing the mission parameters, securing sponsorship, obtaining the students, speakers, and mentors, selecting the jury, and advertising the event. "Every edition of the challenge has two new graduate students as the co-chairs, so there is certainly some pressure to pull off another successful event," says Heidt. "However, we have an amazing support network made up of the previous co-chairs as well as KISS [Keck Institute for Space Studies] faculty and staff."

This sense of community motivated Heidt and Graebener to take on the responsibilities of co-chairs. "I've always been interested in space as well as giving back to this amazing community, so being part of the Space Challenge was a no-brainer," says Heidt.

Out of a record 912 applicants from 75 different countries and 332 universities, Heidt and Graebener narrowed the pool down to the final 32 students through a series of interviews. After assessing the academic backgrounds of each student, the two teams were then assembled so each included a fair distribution of experts in each area. "I really liked the applications where I could tell that they are enthusiastic about space and have historically sought out opportunities to pursue this passion of theirs," says Heidt.

"If someone was really excited about the mission during the interview or application and stated some ideas that they already had about the challenge, some specific technology that they're interested in investigating, that definitely stood out to me," adds Graebener.

Adrian Dumitrescu was one such international student selected to participate in this year's challenge. A member of Team Voyager, Dumitrescu is a PhD student at the University of Southampton in England, but he is originally from Romania. This was Dumitrescu's third time applying for the Caltech Space Challenge, one of a few participants who have applied multiple times.

Before this year's challenge commenced, Heidt and Graebener, who designed all facets of the Titan mission statement, anticipated what the teams' biggest obstacles might be based on conditions near Titan's surface liquid. "They have to collect a sample of the lake liquid, a sample of the atmosphere right above the lake, and a sample of the soil of either the ground of the lake or the shore of the lake," says Graebener. "This is going to be really exciting; how they are going to figure out how to take these three samples and bring them back to Earth?"

"You don't want to, for example, spend potentially billions of dollars to obtain these samples and have them leak out on their way back to Earth, which would obviously be a critical mission failure," says Heidt, "so how to store these samples safely and obtain enough propellants or energy to be able to exit the strong gravitational field surrounding Saturn to come back to Earth—that's definitely no easy feat."

When asked what advice they would give to the students about to participate in this year's challenge, both co-chairs offered salient points. "Getting enough sleep is definitely important; that's something I've learned as a PhD candidate," says Heidt.

"Be creative and don't be intimidated," says Graebener. "I'm 100 percent sure the teams are going to surprise us with their amazing mission concepts at the end. They just need to trust the process and trust themselves and their abilities, because they are the best of the best."

"It was hard to gauge when we were good enough," says Chloé Gentgen, a member of team Explorer and PhD student at MIT who is originally from France. The teams had free rein to design their concepts without much interference from the mentors or organizers, so determining when a design component was "good enough" required effective team communication and trust. "Playing Ninja was helpful," says Gentgen, when referring to how team Explorer managed to build trust. Ninja is a team-building game in which you eliminate your opponents by swiping at their hands. It's commonly played as an ice breaker and helps explain some of the sudden bursts of laughter heard around Caltech during the Space Challenge.

On the final day of the challenge, teams Voyager and Explorer presented their mission concepts to a jury made up of JPL scientists, Caltech faculty, and aerospace industry insiders. The teams were given 45 minutes to explain all aspects of their mission and field questions from the jury. This step of the challenge tested the teams' ability to communicate effectively and remain graceful under pressure. During the closing ceremony, members of the jury expressed amazement at both teams' composure and the scope of the mission concepts. Team Voyager was applauded for its elegant entry, descent, and landing (EDL) solution, and team Explorer was praised for its excellent written documentation and propulsion solution.

After an intense week and final debrief from jury members, team Voyager was revealed as the winner by a narrow margin. "This is one of those situations where it's a bummer you have to choose a winner," says George Whitesides, the lead juror and current chairman of the Space Advisory Board for Virgin Galactic. "Both teams worked their guts out for a week to produce something that many organizations would take months, if not years, to produce."

Ultimately, the element of feasibility pushed team Voyager's proposal over the edge. "The teams each figured out relatively elegant solutions to something that would instantly be the hardest thing that NASA has ever done robotically," says Whitesides. "The ultimate reason that Voyager won was because we thought their proposal was more likely to be an implementable mission, something that a NASA-type organization might be able to afford."

While competition can add a sense of drama, the value of the Space Challenge lies beyond a simple head-to-head battle. "I believe project-based learning is arguably the most effective type of learning that we can give students," says Whitesides. "In one week, the students who participated in the 2022 Caltech Space Challenge learned the equivalent of months of systems design. This is exactly what both employers and other institutions want to see in the people they hire: the ability to work with other people in a group and successfully accomplish a shared goal."

The student-designed-and-executed Space Challenge started relatively close to home in 2011 with a mission concept centered around a human mission to a near-Earth object and continues to expand in scope and distance from Earth. "The great thing about the Caltech Space Challenge is that it was a totally original idea thought up and executed by Caltech students," says Tom Prince, Caltech Ira S. Bowen Professor of Physics, Emeritus and Allen V.C. Davis and Lenabelle Davis Leadership Chair, Keck Institute for Space Studies. "The Space Challenge has gotten even better with subsequent challenges, and I'm sure it will have a lasting legacy by helping to develop the next generation of space explorers."