Hotheaded, impulsive men who shoot first and ask questions later are a staple of Westerns and 1970s cop films, but new research shows there might be truth to the trope.

A study conducted by researchers from Caltech, the Wharton School, Western University, and ZRT Laboratory tested the hypothesis that higher levels of testosterone increase the tendency in men to rely on their intuitive judgments and reduce cognitive reflection—a decision-making process by which a person stops to consider whether their gut reaction to something makes sense. The researchers found that men given doses of testosterone performed more poorly on a test designed to measure cognitive reflection than a group given a placebo.

The research will appear in an upcoming issue of the journal Psychological Science.

"What we found was the testosterone group was quicker to make snap judgments on brain teasers where your initial guess is usually wrong," says Caltech's Colin Camerer, the Robert Kirby Professor of Behavioral Economics and T&C Chen Center for Social and Decision Neuroscience Leadership Chair. "The testosterone is either inhibiting the process of mentally checking your work or increasing the intuitive feeling that 'I'm definitely right.'"

The study, which is one of the largest of its type ever conducted, included 243 males who were randomly selected to receive a dose of testosterone gel or placebo gel before taking a cognitive reflection test. A math task was also given to control for participant engagement, motivation level, and basic math skills.

The questions included on the cognitive reflection test are exemplified by the following:

For many people, the first answer that comes to mind is that the ball costs 10 cents, but that's incorrect because then the bat costs only 90 cents more than the ball. The correct answer is that the ball costs 5 cents and the bat costs $1.05. An individual prone to relying on their gut instincts would be more likely to accept their first answer of 10 cents. However, another person might realize their initial error through cognitive reflection and come up with the correct answer.

Participants were not limited on time while taking the test and were offered $1 for each correct answer and an additional $2 if they answered all the questions correctly.

The results show that the group that received testosterone scored significantly lower than the group that received the placebo, on average answering 20 percent fewer questions correctly. The testosterone group also "gave incorrect answers more quickly, and correct answers more slowly than the placebo group," the authors write. The same effect was not seen in the results of the basic math tests administered to both groups. The results "demonstrate a clear and robust causal effect of [testosterone] on human cognition and decision-making," they conclude.

The researchers believe that the phenomenon they've observed can be linked to testosterone's effect of increasing confidence in humans. Testosterone is thought to generally enhance the male drive for social status, and recent studies have shown that confidence enhances status.

"We think it works through confidence enhancement. If you're more confident, you'll feel like you're right and will not have enough self-doubt to correct mistakes," Camerer says.

Camerer says the results of the study raise questions about potential negative effects of the growing testosterone-replacement therapy industry, which is primarily aimed at reversing the decline in sex drive many middle-aged men experience.

"If men want more testosterone to increase sex drive, are there other effects? Do these men become too mentally bold and thinking they know things they don't?"

The paper is titled "Single dose testosterone administration impairs cognitive reflection in men." Co-authors are Camerer's former graduate student Gideon Nave (PhD '16), now at the Wharton School of the University of Pennsylvania; Amos Nadler of Western University in Canada; and David Zava of ZRT Laboratory. Funding for the study came from the 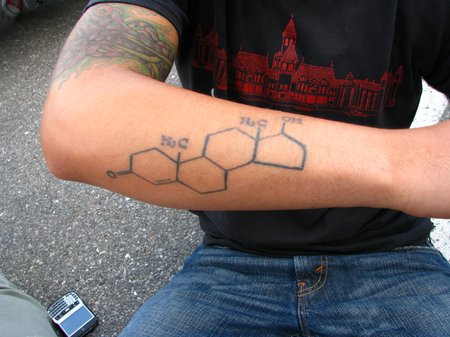 A study shows that testosterone, whose molecular structure is depicted in the above tattoo, hampers decision making and increases impulsive behavior in men. Credit: Flickr user ydylg
Image Lightbox 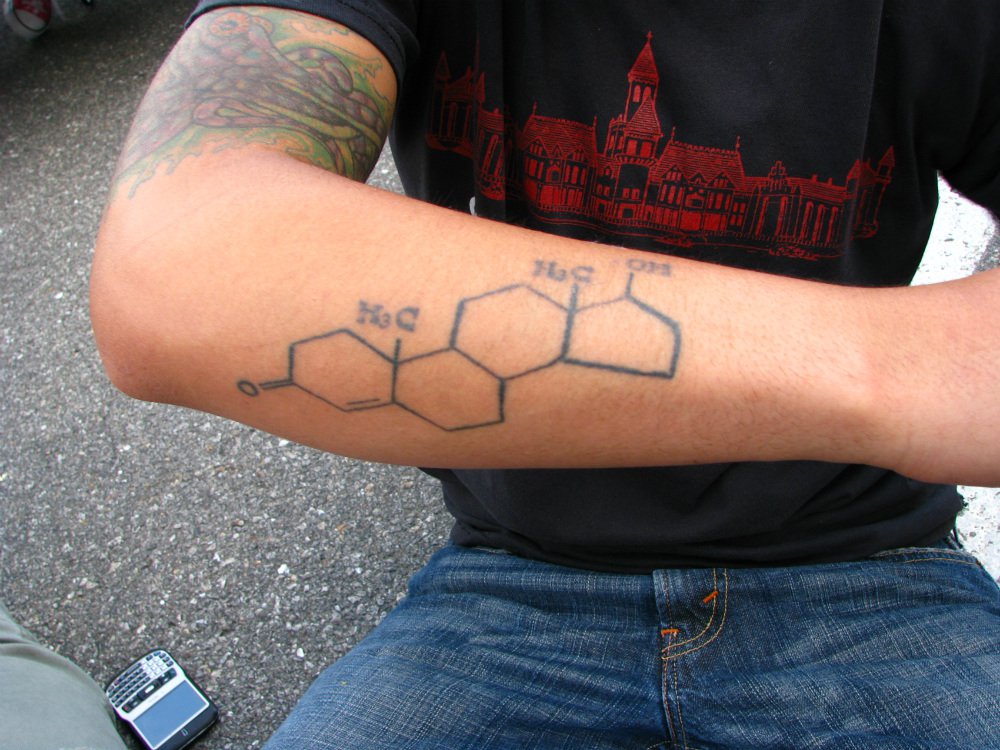