Whether robots are exploring caves on other planets or disaster areas here on Earth, they need to be autonomous; meaning, they need to be able to navigate a location and seek out objects of interest without access to GPS or human guidance.

The Subterranean Challenge tests this kind of cutting-edge technology. Wednesday concluded the second circuit of this contest, which is sponsored by the Defense Advanced Research Projects Agency (DARPA). The top-ranking team was CoSTAR (Collaborative SubTerranean Autonomous Resilient Robots), which consists of 60 engineers from the Caltech campus and JPL, MIT, the Korea Advanced Institute of Science and Technology (KAIST), and Sweden's Lulea University of Technology. Caltech manages JPL for NASA.

The competition is divided into four contests spread over three years in which teams program their robots to navigate a complex underground course. The first contest, held last August, took place in a man-made mine. For the most recent contest, called the Urban Circuit, teams raced against one another in an unfinished power plant in Elma, Washington.

"The goal is to develop software for our robots that lets them decide how to proceed as they face new surprises," says JPL Robotics Technologist Ali Agha, CoSTAR's team leader. "Robots are highly autonomous and for the most part have to make decisions without human intervention." 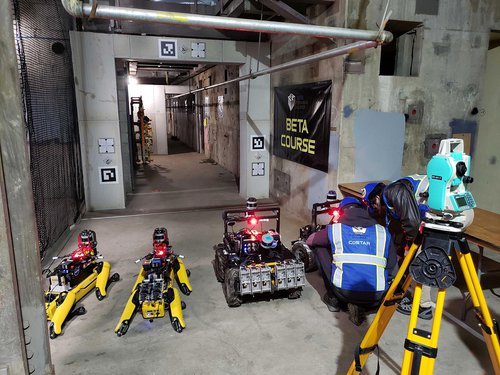 Robots from Team CoSTAR sit at the ready outside of one of the underground courses, preparing to explore. Credit: Courtesy of Team CoSTAR
Image Lightbox 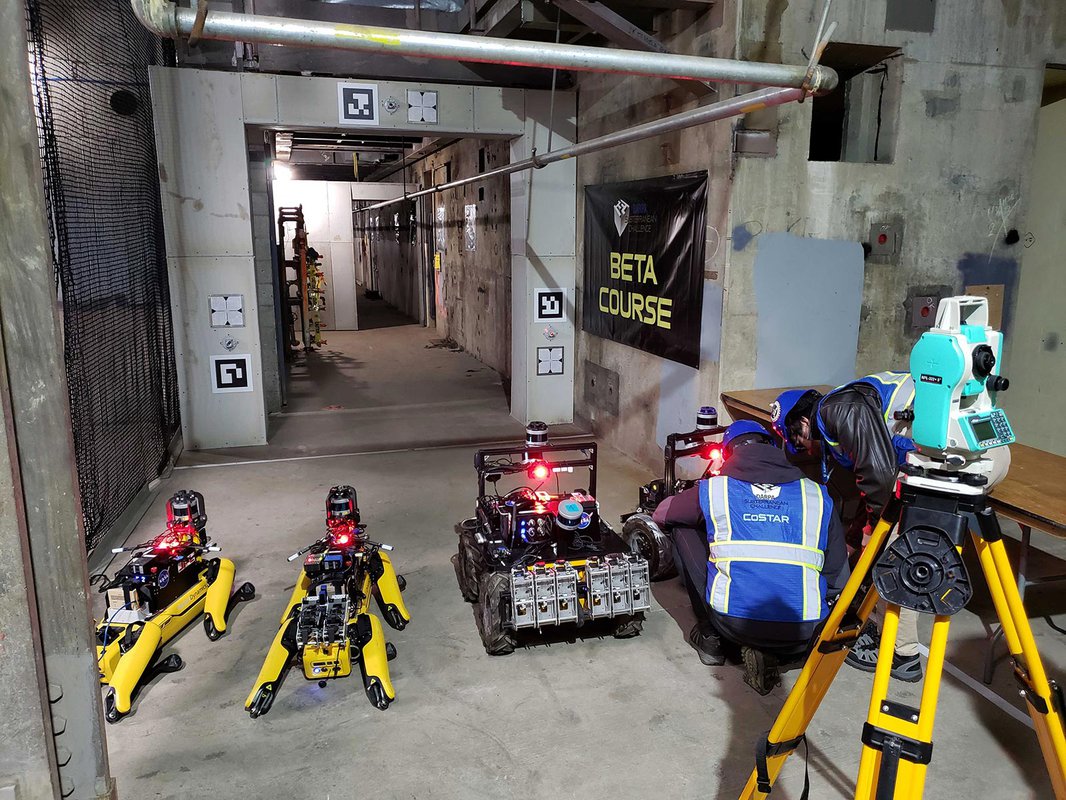 Robots from Team CoSTAR sit at the ready outside of one of the underground courses, preparing to explore.
Credit: Courtesy of Team CoSTAR
Download Full Image

CoSTAR has a broad stable of robots that can roll, walk, or fly, depending on what they encounter. Many of the robots were either built or tested at Caltech's Center for Autonomous Systems and Technologies (CAST), a research center launched in 2017 to unite engineers and scientists from campus and JPL to create the next generation of autonomous systems and advance the fields of drone research, autonomous exploration, and bio-inspired systems.

As CoSTAR's robots explore a new space, they build a 3-D map of the subterranean environment and send back the gathered information and maps to the scoring server on the surface. Other robots can be sent in depending on what the first one discovers along the way. In Elma, the team wound up deploying just two types of robots: four-wheeled truck-like bots known as "Huskies," and two robotic quadrupeds from Boston Dynamics known as "Spots."

"One of the two courses we had to run had multiple levels, so it was great that the Boston Dynamics robots were fantastic on stairs," says Joel Burdick, the Richard L. and Dorothy M. Hayman Professor of Mechanical Engineering and Bioengineering and JPL research scientist, and the leader of the Caltech campus section of the CoSTAR team.

In the week leading up to the competition, CoSTAR tested its robots at the nearby Elma High School, setting up obstacles for the robots to navigate after school hours. It was crucial practice for the team, which has only had the robots since January. "We really owe a debt of gratitude to Elma High School," Burdick says. 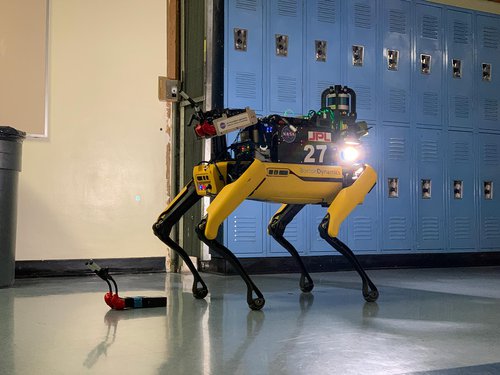 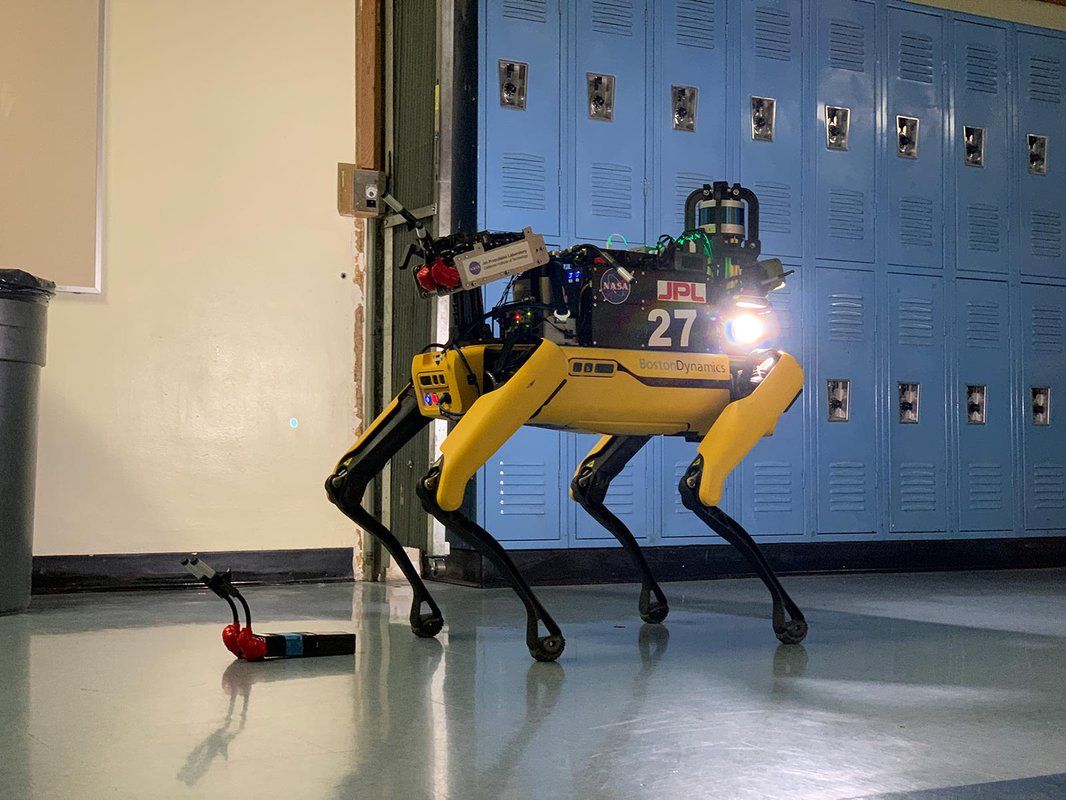 At the entrance to the course, these robotic adventurers are in radio contact with a single human supervisor by dropping communications nodes, a kind of wireless repeater that extends their reach. Once they're out of contact, it is up to each robot to decide whether it should proceed or backtrack to update its team. The robots also need to rely on fellow robots to access different levels of the course. For example, a wheeled robot might request a legged one to continue the course beyond a flight of stairs.

The team had two hourlong attempts to explore two different courses—four scoring runs in all. During a run, their goal was to create as detailed a map as possible, finding and locating predetermined objects of interest. All the circuits include items such as a warm mannequin that simulates a human disaster survivor, or a lost cellphone with a Wi-Fi signal. This particular course also included a carbon dioxide leak and a warm air vent. Each "find" is worth one point, with a total of 20 points available.

After the first run at each of the courses, CoSTAR had created extensive maps, but had not made enough finds to take the lead.

"We had great maps, but only four finds on one course and five on the other," says Caltech graduate student Amanda Bouman, who was on the 10-person "pit crew" that supervised each of the runs. "So, we spent the next two days in a giant hackathon, digging into the software that allows cameras, Wi-Fi, and CO2 sensors to discover artifacts."

The team pulled long nights, but in the end, it paid off. "It came down to a nail-biter each time, Bouman says. "We basically scored all of our points in the last 20 minutes of each run." In the end, Team CoSTAR found 16 out of 40 possible objects (20 in each course), earning it the top honors. The No. 2 team, with 11 points, was Explorer, which includes Carnegie Mellon University and Oregon State University.

The next circuit in the Subterranean Challenge will be set in an undisclosed natural cave network this August. A final circuit that blends man-made tunnels, urban environments, and natural caves will take place in August of 2021. Teams competing in that final event have the opportunity to win up to $2 million in funding from DARPA.