Teagan Wall (PhD '15), who has worked as a writer for TV series including Bill Nye Saves the World and Young Sheldon, recently returned to campus in a new role as stage director.

Wall is joining Theater Arts at Caltech (TACIT) to stage the Broadway musical Avenue Q, which opens February 22. As with the original 2003 Broadway play, the Caltech production uses puppets animated by puppeteers alongside human actors to satirize the challenges of young adulthood. Brian Brophy, Caltech's theater arts director, says the play remains especially relevant, touching on topics of racism, sexuality, and social acceptance with "a built-in sweetness [as well as] the power to shock."

At Caltech, Wall performed her graduate research in the Caltech lab of biology professor Henry Lester, where she studied nicotine addiction. She also participated in Caltech's theater program, and co-founded the Nerd Brigade, a group of L.A.-area science communicators. In a recent interview with Caltech magazine, Wall discussed her life since Caltech as well as her experiences directing Avenue Q.

Caltech magazine: What have you been up to since we last connected with you?

Teagan Wall: I wrote for Bill Nye Saves the World for the three seasons that the show ran. Then I started working on Young Sheldon. I was on that for most of the first season. It was very different working on something scripted. I went from doing a show about science to a show that uses science to tell stories, which I really liked.

I've also been expanding my toolbox. I'm in an MBA program at University of Illinois at Urbana-Champaign right now just because I think learning the business side of any industry is very important. And I'm directing Avenue Q here at Caltech, which is something I've been begging to do for five years.

CM: What made you want to direct Avenue Q?

TW: Avenue Q is one of my favorite musicals. I saw it on Broadway back in 2004. In fact, I've seen more productions of Avenue Q than any other show. I just love it every time. I think it's especially good for a college or university setting where you have people who are at that coming-of-age, trying-to-figure-out-what-they're-going-to-do point in their lives, and they're trying to figure out how to take everything they've learned and apply it to the real world. I think the conversations it includes are more salient than ever.

I've been pushing TACIT to let me do the show for five years. I got Jake Mattinson and Lydia Kivrak interested in doing it with me four years ago when we did Boldly Go [a musical parody based on Star Trek]. They are seniors now, and they were like, "This is our last chance!" And they helped make it happen.

CM: What makes Caltech theater and Caltech actors different from other places?

TW: I think the big thing is Caltech doesn't have a theater department. Caltech doesn't have a dance department. We have EXPLiCIT [the EXtracurricular PLayers], and we have TACIT. All of it is extracurricular and all of it is voluntary. The people you're working with, they're not just under extraordinary pressure, they're also incredibly intelligent. That can be both a very good thing and a very bad thing, because people get in their own heads. You try and convince them to just take a break from that, and it's very, very hard.

The good news is that you can use words to describe what you're looking for on stage that you can't use with other people. Avenue Q, for example, has puppets. The puppets are much heavier than people think, so it's not uncommon for arms to start to droop over the course of the show as people's arms get tired. I can say things like, "I need your puppet to be orthogonal to the ground at all times." And the actors know exactly what that means. People would not know what that meant at almost any other school.

TW: The work that he's done with Caltech theater is amazing. He really takes the goal, which is providing that creative outlet to students, faculty, and members of the larger community, to heart and provides that in many different ways. Not only do we have Avenue Q going on right now, but TACIT just closed a show called Hallow in the Hills, which was written by a member of the Caltech community based on a series of, I believe, Nathaniel Hawthorne short stories. That is very different in every possible way from Avenue Q.

Then we have the MACH 33 festival every year, which is a series of science-driven plays normally done just as readings, which really gives a great outlet for new authors, for people who want to workshop things, for people who are interested in performing but don't necessarily have the time to commit to something like a musical. In the past, it's given me the opportunity to work with some wonderful directors who I have just loved working with. The number of options for people who are interested in theater is amazing, especially for a school of this size and with this sort of focus.

CM: What are some of the challenges of staging Avenue Q?

TW: There are actually a few things that make Avenue Q easier to stage than a lot of shows. For example, costumes. We have essentially three characters that actually need costumes. Everybody else is a puppet. The puppets themselves are a difficulty, though, because most people don't have experience literally talking with their hands. In fact, one of the things I've learned is that most people's instinct is to talk with the puppets in the opposite way that we actually talk with our mouths. Having to learn to open the puppet's mouth when you feel like you should be closing it, it feels very backwards for a while until you get that into your body and into your muscles.

The other thing is, I'm a dancer, and dancing with puppets is a unique challenge. At one point in the show, we have puppets waltzing. For two of the puppets, it's actually not that different from having the actors waltz, but for two of the other puppets, one of them is maneuvered by two people. We actually have three people waltzing as two puppets. I was like, "Let's see if we can do this." I'm very impressed that we evidently can!

CM: How would you characterize the play? It has humor. It has a lot of bawdiness. And it deals with a lot of very serious issues as well.

TW: It's definitely R rated. That's because of the language. But if you don't have a problem with language, the only other issue is that you have some naked puppets on stage.

The play deals with a lot of issues of identity. One of the characters is struggling with being gay—especially being gay as a Republican and an investment banker—and trying to navigate the fact that he is a gay man who isn't anything like any of the other gay men he sees in the world.

There's also a song about how everyone's a little bit racist. That song is one of the more interesting ones to me because the conversation surrounding implicit bias and systemic racism was very different in 2004 than it is today—and yet, the song holds up very well. It's basically about putting in the work to fight back against racism while also recognizing that we were all raised in this society and we are all trying to do better. It's not necessarily our fault, but if we can just recognize that this is a problem as a team, we can help fight back against it.

CM: It's also about relationships and commitment and …

TW: … and trying to balance finding yourself and finding your person. The main character is just out of college and he's really struggling to find out what he wants to do or be, and he falls in love with another character and ends up tanking everything because it's not how he pictured it going. Finding the balance between what is and what you thought it should be is very interesting, especially when you're 18 to 22 and still trying to figure out what you even think it should be, let alone what it's going to be.

CM: Were the actors familiar with the show before performing in it?

TW: Some of them. There have been a couple of times where actors have heard songs for the first time and been a little scandalized because, I mean, there's a song called "The Internet is for Porn." There's a song called "You Can Be as Loud as the Hell You Want," which is about getting it on. That's one of the reasons I think that a college campus is so great for this show because it takes a lot of things that would be taboo elsewhere, and it allows people to lean in and be weird and be contrarian and get away with it.

CM: What do you think the audience will get from it?

TW: I think the main thing is that it's a lot of fun. The cast is quite small, and they're very close, and they lean on each other so much, and that really comes across on the stage. They are having a great time out there. The more they enjoy it, the more the audience is going to enjoy it. It provides an escape without feeling like you're running away from the problems of the world. It's not cat videos on the Internet, but it also provides a really nice perspective. 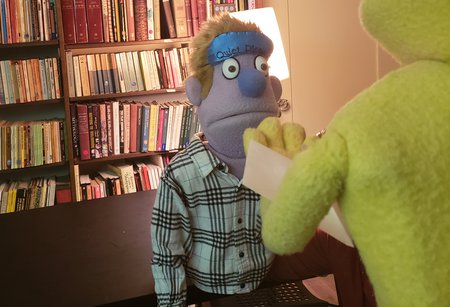 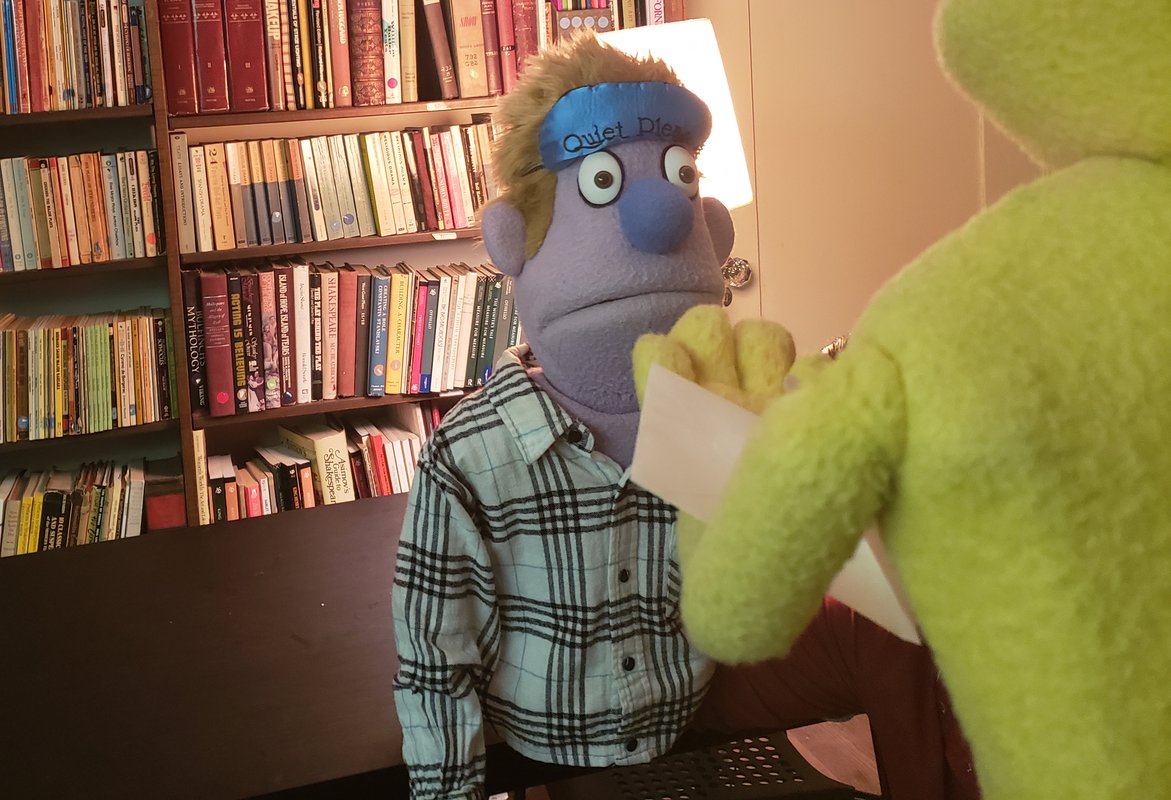