Researchers from the University of Cambridge and Caltech have created model mouse embryos from stem cells—the body's master cells, which can develop into almost any cell type in the body—that have beating hearts, as well as the foundations for a brain and all of the other organs in the mouse body.

The results are the culmination of more than a decade of research, and they could help researchers understand why some embryos fail while others go on to develop into a fetus as part of a healthy pregnancy. Additionally, the results could be used to guide repair and development of synthetic human organs for transplantation.

The research was conducted in the laboratory of Magdalena Zernicka-Goetz, Bren Professor of Biology and Biological Engineering at Caltech. Zernicka-Goetz is also a professor of mammalian development and stem cell biology in Cambridge's Department of Physiology, Development and Neuroscience. A paper describing the breakthrough appears in the journal Nature on August 25.

The embryo model was developed without eggs or sperm. Instead, the researchers mimicked natural processes in the lab by guiding the three types of stem cells found in early mammalian development to the point where they start interacting. By inducing the expression of a particular set of genes and establishing a unique environment for their interactions, the researchers were able to get the stem cells to "talk" to each other.

The stem cells self-organized into structures that progressed through the successive developmental stages until the synthetic embryos had beating hearts and the foundations for a brain, as well as the yolk sac where the embryo develops and from which it receives nutrients in its first weeks. This is the most advanced stage of development achieved to date in a stem cell-derived model.

A major advance in this study is the ability to generate the entire brain, in particular the anterior region, which has been a "holy grail" in the development of synthetic embryos.

"This opens new possibilities to study the mechanisms of neurodevelopment in an experimental model," Zernicka-Goetz says. "In fact, we demonstrate the proof of this principle in the paper by knocking out a gene already known to be essential for formation of the neural tube, precursor of the nervous system, and for brain and eye development. In the absence of this gene, the synthetic embryos show exactly the known defects in brain development as in an animal carrying this mutation. This means we can begin to apply this kind of approach to the many genes with unknown function in brain development."

"Our mouse embryo model not only develops a brain, but also a beating heart, all the components that go on to make up the body," she explains. "It's just unbelievable that we've gotten this far. This has been the dream of our community for years, and the major focus of our work for a decade, and finally we've done it."

Many pregnancies fail at the point when the three types of stem cells begin to send mechanical and chemical signals to each other, which tell the embryo how to develop properly.

"This early period is the foundation for everything else that follows in pregnancy," Zernicka-Goetz says. "If it goes wrong, the pregnancy will fail."

Over the past decade, Zernicka-Goetz's team has been studying these earliest stages of pregnancy to understand why some pregnancies fail and some succeed.

"The stem cell embryo model is important because it gives us accessibility to the developing structure at a stage that is normally hidden from us due to the implantation of the tiny embryo into the mother's womb," Zernicka-Goetz says. "This accessibility allows us to manipulate genes to understand their developmental roles in a model experimental system."

To guide the development of their synthetic embryo, the researchers put together cultured stem cells representing each of the three types of tissue and allowed them to develop in proportions and an environment conducive to their growth and communication with each other, leading to their eventual self-assembly into an embryo.

The researchers found that the extraembryonic cells signal to embryonic cells through chemical signals but also mechanistically, or through touch, guiding the embryo's development.

"This period of human life is so mysterious, so to be able to see how it happens in a dish—to have access to these individual stem cells, to understand why so many pregnancies fail and how we might be able to prevent that from happening—is quite special," Zernicka-Goetz says. "We looked at the dialogue that has to happen between the different types of stem cells at that time—we've shown how it occurs and how it can go wrong."

While the current research was carried out in mouse models, the researchers are developing an analogous model for human embryo development to understand mechanisms behind crucial processes that would be otherwise impossible to study in real embryos.

If these methods are shown to be successful with human stem cells in future, they could also be used to guide development of synthetic organs for patients awaiting transplants. "There are so many people around the world who wait for years for organ transplants," Zernicka-Goetz says. "What makes our work so exciting is that the knowledge coming out of it could be used to grow correct synthetic human organs to save lives that are currently lost. It should also be possible to affect and heal adult organs by using the knowledge we have on how they are made."

The paper is titled "Synthetic embryos complete gastrulation to neurulation and organogenesis." The co-first authors are Gianluca Amadei and Charlotte Handford of the University of Cambridge. Caltech co-authors are postdoctoral scholars Hannah Greenfeld and Dong-Yuan Chen; graduate student Martin Tran; Michael Elowitz, Professor of Biology and Bioengineering and Howard Hughes Medical Institute Investigator; and David Glover, Research Professor of Biology and Biological Engineering. Additional co-authors are Chengxiang Qiu and Beth Martin of the University of Washington; Joachim De Jonghe and Florian Hollfelder of the University of Cambridge; Alejandro Aguilera-Castrejon and Jacob Hanna of the Weizmann Institute of Science in Israel; and Jay Shendure of the University of Washington, the Brotman Baty Institute for Precision Medicine in Seattle, the Allen Discovery Center for Cell Lineage Tracing in Seattle, and the Howard Hughes Medical Institute in Seattle.

Funding was provided by the National Institutes of Health, the European Research Council, the Wellcome Trust, Open Philanthropy/Silicon Valley Community Foundation and Weston Havens Foundation, and the Centre for Trophoblast Research.

This story was adapted from an original story by the University of Cambridge. 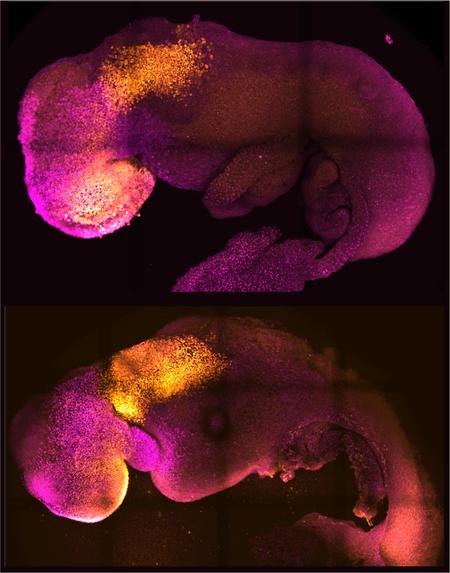 Natural and synthetic embryos side by side, with corresponding body parts stained in the same colors. Credit: Gianluca Amadei, Charlotte Handford
Image Lightbox 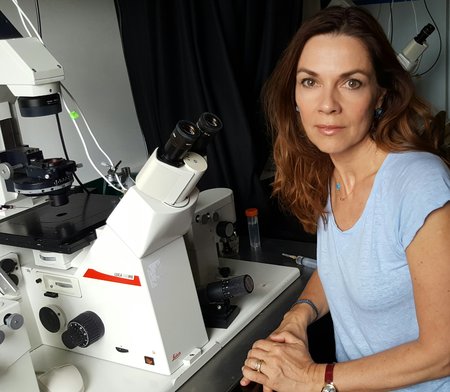