The large amount of jet fuel required to fly an airplane from point A to point B can have negative impacts on the environment and—as higher fuel costs contribute to rising ticket prices—a traveler's wallet. With funding from NASA and the Boeing Company, engineers from the Division of Engineering and Applied Science at Caltech and their collaborators from the University of Arizona have developed a device that lets planes fly with much smaller tails, reducing the planes' overall size and weight, thus increasing fuel efficiency.

On October 8, the researchers—including Emilio Graff, research project manager in aerospace at Caltech and a leader on the project—were presented with a NASA Group Achievement Award "for exceptional achievement executing a full-scale wind-tunnel test, proving the flight feasibility of active flow control."

An airplane's tail forms a critical part of the control system that helps steer the plane during flying. During flight, air rushes around the vertical tail with great force and is deflected by the tail's rudder—a moveable flap at the rear of the tail that can steer the plane by angling air to the left or right. By moving the rudder left or right, a pilot can move the air in one direction or the other, helping to keep the plane flying straight during a strong crosswind.

During the high speeds of flight, the air flow around the tail is so strong that the rudder can control the plane's path with minimal movement. However, during the lower speeds of takeoff and landing, larger rudder deflections are required to maneuver the plane. And in the case of engine failure in a multiengine airplane, the vertical tail must generate enough force to keep the plane going straight by turning "against" the working engine. Airplane manufacturers deal with this challenge by fitting planes with very large vertical tails that can deflect enough air and generate enough force to control the plane—even at low speeds.

"But this means that the planes have a tail that's too big 99 percent of the time," says Emilio Graff, research project manager in aerospace at Caltech and a leader on the project, "because you only need a tail that big if you lose an engine during takeoff or landing. Imagine if the only way you could have airbags in your car was to tow them in a big trailer behind your car, just in case there was an accident. It ends up sucking up a lot of fuel."

The system—designed by Graff and his colleagues in the laboratory of Mory Gharib, Hans W. Liepmann Professor of Aeronautics and Bioinspired Engineering—would allow airplanes to be designed with smaller tails by helping to increase the tail's steering effect at low speeds. The work was done in collaboration with Israel Wygnanski, a professor at the University of Arizona.

In their new approach, the researchers installed air-blowing devices called sweeping jet actuators under the outer skin of the tail along the tail's vertical length. The sweeping jet actuators deliver a strong, steady burst of sweeping air just along the rudder, equivalent to the amount of airflow that would normally be encountered by the tail and rudder at higher speeds. The engineers hypothesized that with the sweeping jets turned on, a smaller tail and rudder could straighten the path of the airplane, even at low speeds.

Graff says that, using these devices, airplane manufacturers could reduce the size of airplane tails by 20 percent, only needing to activate the sweeping jet actuators during the low speeds of takeoff and landing. "That means that most of the time when you're flying around normally, you're saving gas because you have a smaller, lighter tail. So even if this system itself uses a lot of energy, it's only on in emergencies," he says. "When you take off or land, the air jets will be on—just in case an engine fails. But on a 12-hour flight, if you're only using the system for 30 minutes, you're still saving gas during 11 hours and 30 minutes."

The fuel savings come not only from reduced drag due to the smaller size, but also from weight savings and structural advantages from having a shorter tail, Graff adds.

The researchers first tested this hypothesis in the approximately five-by-six-foot Lucas Wind Tunnel at Caltech, recording the effect of sweeping jet actuators on a small model—only 15 percent of the size of an actual airplane tail. Because the jets of air created by the device move back and forth, "sweeping" the air over the length of the tail rather than blasting a single, linear burst of air, the researchers discovered that they could increase air flow over the entire tail with just six of the sweeping jets. On the small-scale model, these six jets boosted the effectiveness of the rudder by over 20 percent.

Upon seeing the favorable results from this preliminary experiment, and as part of NASA's Environmentally Responsible Aviation program, Graff and his colleagues designed the system to test the effects of sweeping jet actuators on a full-sized airliner tail. However, since such tails are nearly 27 feet tall, the engineers had to move this stage of their experiment off campus, to the National Full-Scale Aerodynamics Complex at Moffett Field, California—home of the world's two largest wind tunnels.

After machining sized-up sweeping jet actuators at Caltech, the multi-institutional team, which also included engineers from Boeing Research and Technology and NASA's Langley Research Center, installed the devices on a refurbished Boeing 757 tail, found at an airplane parts salvage yard. The large wind tunnel allowed the researchers to simulate wind conditions that realistically would be experienced during takeoff and landing. Data from the full-scale test confirmed that sweeping jet actuators could sufficiently increase the air flow around the rudder to steer the plane in the event of an engine failure.

The technique used by sweeping jet actuators—called flow control—is not new; it has previously been used for quick takeoffs and landings in military applications, Graff says. But those existing systems are not energy-efficient, he adds, "and if you need a third engine to power the system, then you may as well use it to fly the plane." The system designed by Graff and his colleagues is small and efficient enough to be powered by an airliner's auxiliary power unit—the engine that powers the cabin's air conditioning and lights at the gate. "We were able to prove that a system like this can work at the scale of a commercial airliner, without having to add an extra engine," Graff says.

For the next phase of the project, collaborators at Boeing will test the sweeping jet actuators on their Boeing ecoDemonstrator 757, a plane used for testing innovations that could improve the environmental performance of their aircraft.

These findings could one day help Boeing and other manufacturers produce "greener" planes. However, Graff notes, there are still kinks to work out—for example, as currently designed, the sweeping jets could be noisy for passengers—and the adoption of any new features on an aircraft can be a lengthy process. But once adopted, the payoffs could be huge—and improving the tail is not the only goal, Graff says.

"This is only the beginning. The tail is a 'low risk' surface; modifying it puts engineers at ease compared to, for example, modifying wings," he says. "But the data shows that similar systems could be applied to wings to increase the cruise speed of airplanes and allow some maneuvers to be achieved without moving parts.

"I would be surprised if this ends up in the next line of airplanes—since the new planes are already probably years into the design stage—but some version of this device could be adopted in the near future," he says. And the researchers estimate that if all commercial airplanes were fitted with this device and used it for one year, the fuel savings would be the equivalent of taking a year's worth of traffic off of Southern California's notoriously crowded 405 freeway—a worthy goal.

The sweeping jet actuator was developed as part of NASA's Environmentally Responsible Aviation (ERA) project, which aims to reduce the impact of aviation on the environment. 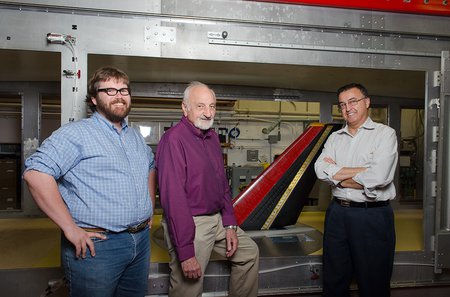 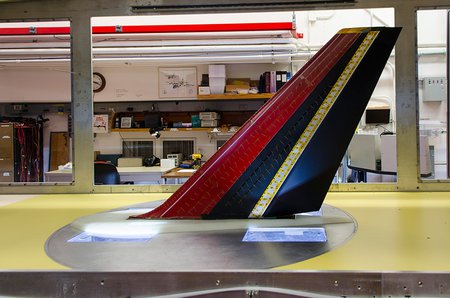 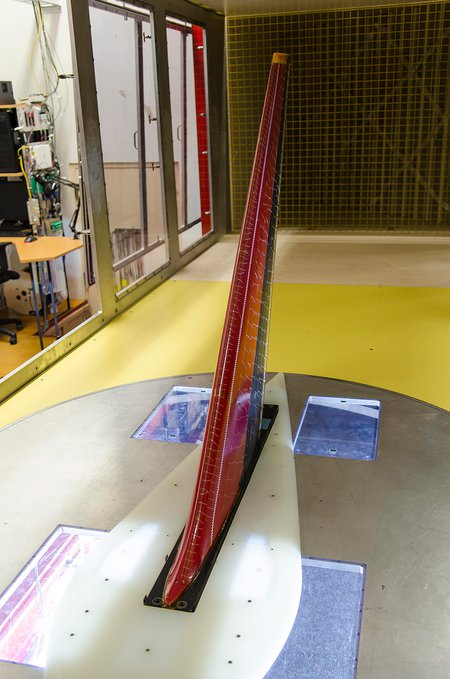 Credit: Lance Hayashida/Caltech Internal flow inside the sweeping jet actuator visualized with high-speed video. In this clip, the air supply is suddenly opened resulting in the onset of internal oscillations (hence 'sweeping') all the way to supersonic speeds at the exit jet (on the right). Credit: Damian Hirsch/Caltech
Image Gallery Lightbox 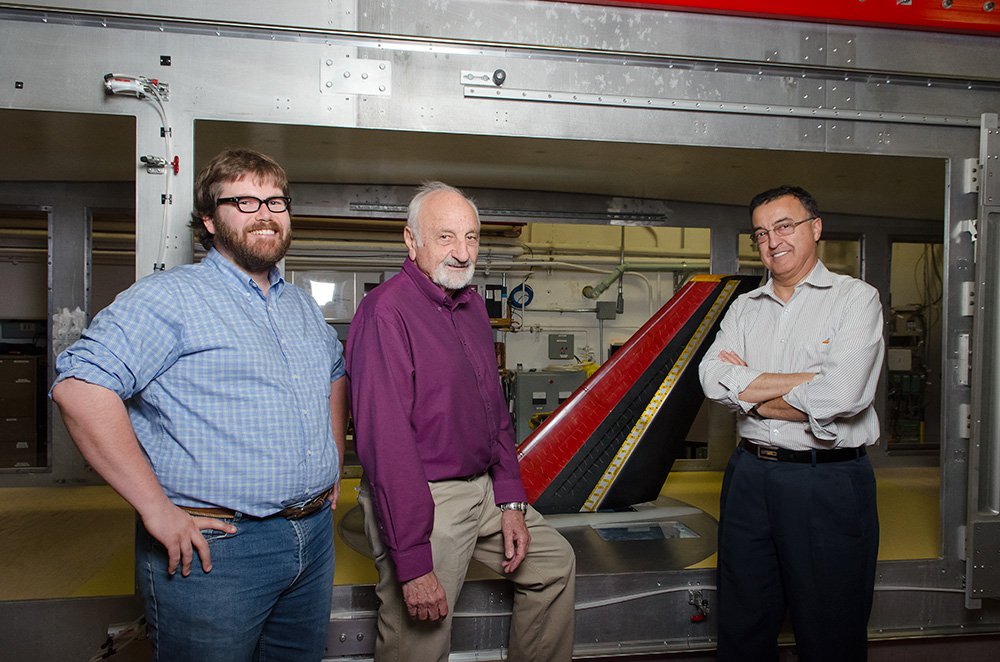 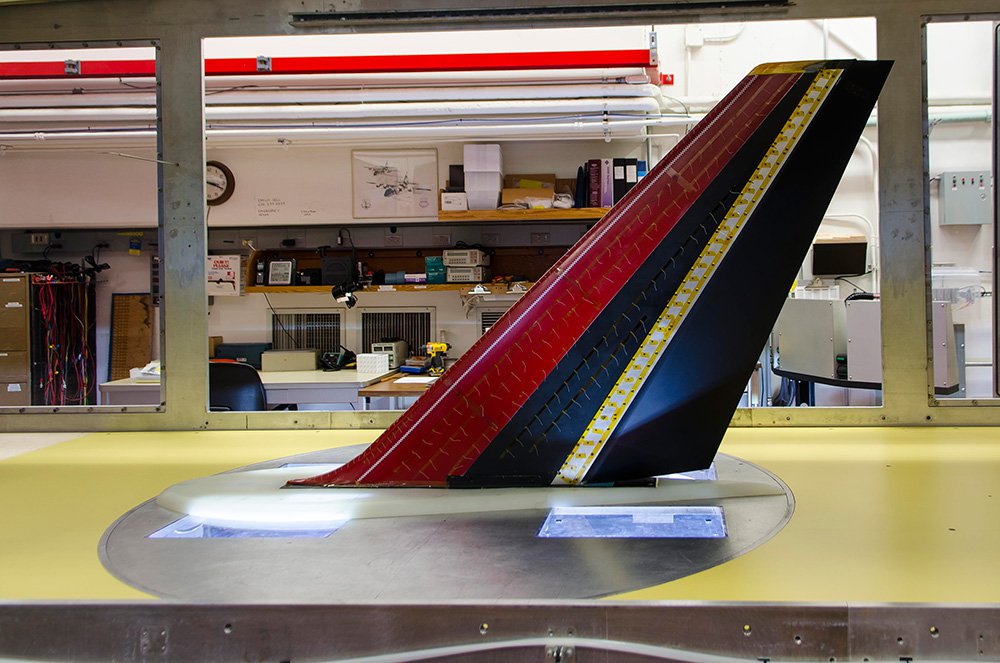 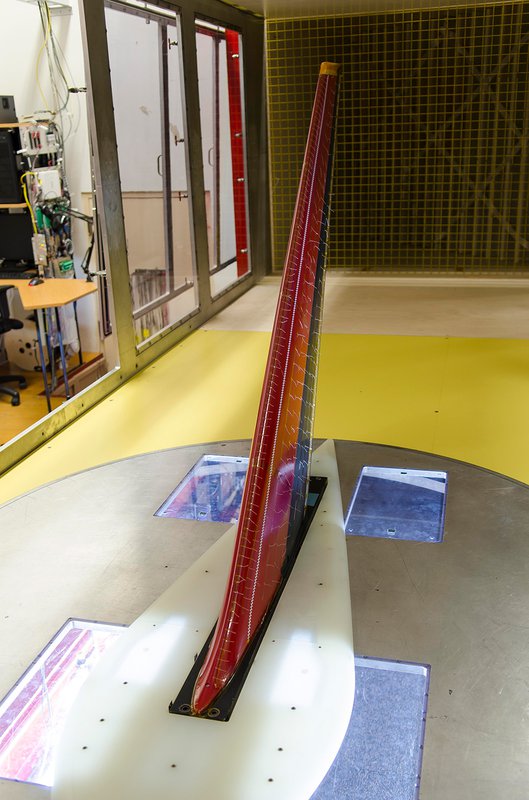