Caenorhabditis elegans, or C. elegans, are tiny worms with tiny brains—their whole bodies are the width of a pencil tip and contain only 302 neurons. These nematodes live out their two-week-long lifespans in rotting vegetation, eating bacteria, and avoiding predators. However, C. elegans does not always live such a simplistic lifestyle. Under environmental stress—such as when overcrowding leads to lack of food—these creatures can switch into survival mode, halting aging for months and attempting to hitch a ride to a new location by attaching to other animals.

Caltech researchers have now discovered how this worm, with such a limited neurological system, can so drastically change its behaviors. The findings may have implications for understanding how parasitic nematodes find and infect hosts.

The work was done in the laboratory of Paul Sternberg, Bren Professor of Biology. The research is described in a paper that recently appeared in Proceedings of the National Academy of Sciences.

When a C. elegans worm realizes that its environment is overcrowded and food is running low, it shifts into what is known as the dauer state. These dauer worms are able to halt development and feeding and can survive in this state for six to eight months.

Meanwhile, these worms cannot last forever in this survival mode and must relocate to a better location. However, C. elegans can generally only wriggle around without moving very far, meaning that they cannot escape the poor conditions that triggered the dauer state in the first place. Thus, they need to hitch a ride on other animals, like snails or flies. To do this, a worm will nictate, a process in which the worm stands straight up on its tail and waves vigorously as if trying to hail a taxi. Normally, C. elegans worms do not nictate. But when dauer worms do, they are more likely to latch onto a passing animal. Additionally, while C. elegans is normally repelled by carbon dioxide (because the gas is likely to have been emitted by a nearby predator), dauer worms are attracted to carbon dioxide—likely because the gas could indicate that a potential carrier animal is nearby.

These drastic behavioral changes have been known for some years, but the question still remained: How can a worm with such a tiny nervous system acquire behaviors that are so different from their normal states?

"We decided to build upon previous work by a former graduate student, Oren Schaedel [PhD '10], who measured the expression levels of all 20,000 genes within C. elegans," says graduate student and co-first author James Siho Lee. "Looking at how gene expression changed as the worms went into dauer mode, we found that 8,000 genes were affected—a big percentage! In particular, we noted that genes encoding for certain types of neural signaling molecules called neuropeptides were strikingly up-regulated, or increased. We chose to focus on neuropeptides to see if we could discover more about how the worm's limited neural system can implement such drastic behavioral changes."

Neurons are physically wired together to form circuits with structures called synapses. The neurons send chemical and electrical signals to other connected neurons through these synapses, like speaking directly to a select group of people. However, a neuron can also send a mass message—like shouting to a crowd—by releasing chemicals called neuropeptides, which flood through intercellular space and signal to neurons that may not be connected through synapses.

The Caltech team found that as C. elegans goes into the dauer state, more than half of the genes that encode for neuropeptides are activated more strongly, indicating that the worms are sending many more mass messages.

"We wondered if this increase in neuropeptides was responsible for the transition into dauer. To test this, we used a mutant strain of C. elegans that is defective in the gene sbt-1, which controls a large fraction of neuropeptides," says graduate student and co-first author Pei-Yin Shih. "We found that overall reduced levels of neuropeptides made it much less likely that an animal under stress would go into the dauer state."

The sbt-1 mutants did not exhibit any attraction to carbon dioxide and their nictation was feeble, suggesting that the increase in neuropeptides is a critical requirement for C. elegans to truly enter the dauer survival mode and gain access to carrier-seeking behaviors.

"These animals are not just hibernating—they are actually triggered by their environments to rewire their own brains," says Shih.

One particular subset of neuropeptides that increases during the dauer stage is an evolutionarily ancient group called the FMRFamides. Many species of parasitic nematodes, which are responsible for disease in millions of people across the world, also contain FMRFamides.

"Parasitic nematodes only have one stage within their life cycle where they are truly infective and must find a host," says Lee. "During this stage, they don't feed, they shrink down, and they're very dauer-like. Thus, we're now interested if what we've learned about neuropeptides in C. elegans can be carried over into parasitic worms. Because the FMRFamide family seems to enable access to new, carrier-seeking behaviors in C. elegans, we think that studying FMRFamides may reveal strategies for disrupting the host-seeking behaviors of parasitic nematodes, and will shed light on how nervous systems can load up different functions and behaviors under different circumstances."

The paper is titled "FMRFamide-like peptides expand the behavioral repertoire of a densely connected nervous system." In addition to Lee, Shih, Schaedel, and Sternberg, other co-authors are Caltech graduate students Porfirio Quintero-Cadena and Alicia Rogers. Funding was provided by the Howard Hughes Medical Institute and the National Institutes of Health.

Paul Sternberg is an affiliated faculty member of the Tianqiao and Chrissy Chen Institute for Neuroscience at Caltech. 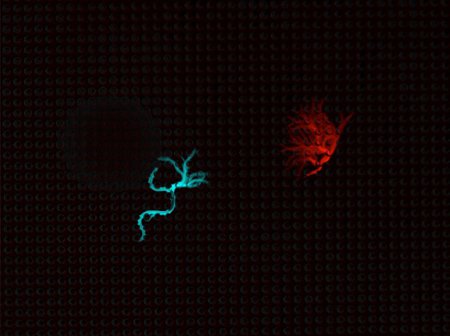 Time-lapsed recordings of dauer worm movement during nictation, a process by which a worm stands on its tail and waves its body in an attempt to latch on to a nearby carrier animal. Mutants that are deficient for neuropeptides (red) exhibit much weaker nictation in the dauer state than normal worms (blue). Credit: Courtesy of the Sternberg laboratory
Image Lightbox 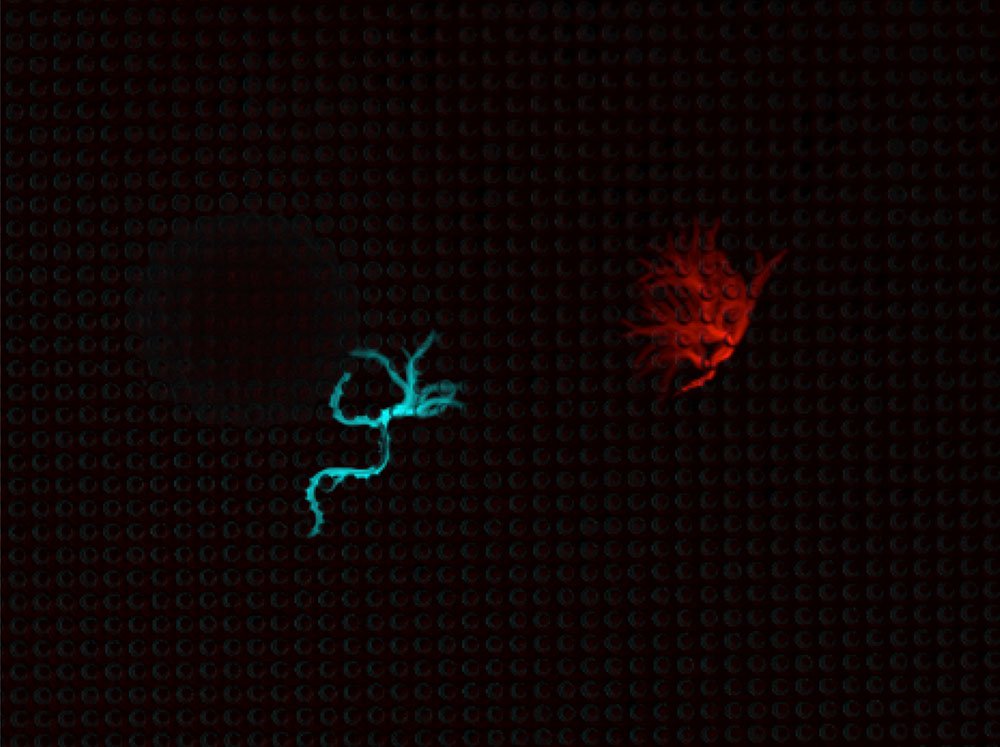 Time-lapsed recordings of dauer worm movement during nictation, a process by which a worm stands on its tail and waves its body in an attempt to latch on to a nearby carrier animal. Mutants that are deficient for neuropeptides (red) exhibit much weaker nictation in the dauer state than normal worms (blue).
Credit: Courtesy of the Sternberg laboratory
Download Full Image
Subscribe
The Caltech Weekly