Skip to main content
Home  /  About  /  News  /  The Surprising, Ancient Behavior of Jellyfish

The Surprising, Ancient Behavior of Jellyfish

At first glance, humans seem to have very little in common with Cassiopea, a primitive jellyfish. Cassiopea is brainless, spineless, and spends essentially its entire life sitting upside down on the ocean floor, pulsating every few seconds. However, Caltech scientists have now discovered that, as different as our daily schedules may seem, humans and jellyfish actually start and end their days with the same behavior: sleep. This finding that jellyfish sleep implies that sleep is an ancient behavior, largely untouched by millennia of evolution.

The work was a collaboration between three Caltech laboratories led by: Paul Sternberg, Thomas Hunt Morgan Professor of Biology and Howard Hughes Medical Institute Investigator; Viviana Gradinaru (BS '05), assistant professor of biology and biological engineering, Heritage Medical Research Institute Investigator, and Director of the Center for Molecular and Cellular Neuroscience of the Tianqiao and Chrissy Chen Institute for Neuroscience at Caltech; and Lea Goentoro, assistant professor of biology. The work appears online in the September 21 issue of Current Biology.

"It may not seem surprising that jellyfish sleep—after all, mammals sleep, and other invertebrates such as worms and fruit flies sleep," says Ravi Nath, the paper's co-first author and a graduate student in the Sternberg laboratory. "But jellyfish are the most evolutionarily ancient animals known to sleep. This finding opens up many more questions: Is sleep the property of neurons? And perhaps a more far-fetched question: Do plants sleep?"

In order to be considered "sleeping," an organism must meet three critical criteria. First, it must demonstrate a period of reduced activity, or quiescence. Second, the organism must exhibit a decreased response to otherwise-arousing stimuli while in the quiescent state. Finally, the organism must show an increased sleep drive when it is deprived of sleep.

"When humans sleep, we are inactive, we often can sleep through noises or other disturbances which we might otherwise react to if we were awake, and we're likely to fall asleep during the day if we don't get enough sleep," says Claire Bedbrook, co-first author and a graduate student in the Gradinaru laboratory. "We might seem extremely different from jellyfish, but we both exhibit a similar sleep state."

So, how do you prove that a jellyfish is asleep?

Next, the team set out to prove that the animals had an increased arousal threshold during this period of decreased activity. The team set a jellyfish on a platform higher up in the tank and pulled the platform out from underneath the animal once the jellyfish showed signs of quiescence. Normally, an alert jellyfish would immediately swim to the bottom of the tank. But the jellyfish in a sleep state floated in the water for up to five seconds before "waking up" and reorienting itself.

Finally, the researchers needed to show that, when deprived of sleep, the jellies would exhibit an increased sleep drive—just as humans do after a sleepless night. To do this, the researchers pulsed water at the animals every 10 seconds for 20 minutes, effectively "poking" them to keep them awake. They then observed that the jellyfish were more likely to fall into the quiescent state during the day, when they would normally be active.

"Many animals have the same genes that govern sleep," says Michael Abrams, co-first author and a graduate student in the Goentoro laboratory. "Though it was beyond the scope of our project to measure gene expression in jellyfish, we tested the effects of compounds that in other animals are known to promote sleep, such as melatonin. We found that these compounds did affect jellyfish sleep in the predicted ways, suggesting that their underlying sleep mechanism is similar to those of other organisms—including humans."

The project was a collaborative effort across several laboratories with different areas of expertise. In addition to the three first authors and their advisers, the team had help from Ty Basinger, a lab technician in the Goentoro lab, in working with the jellyfish; from Justin Bois, lecturer in biology and biological engineering, with computational analysis; and from Professor of Biology David Prober, an expert on how genes and neurons regulate sleep. 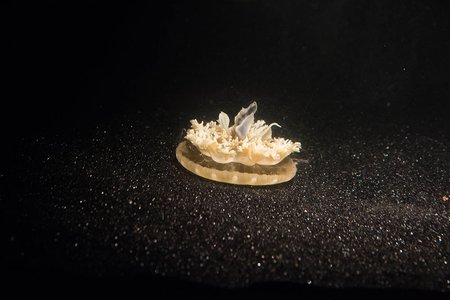 The Cassiopea jellyfish spends most of its life resting upside down on underwater surfaces. Credit: Caltech 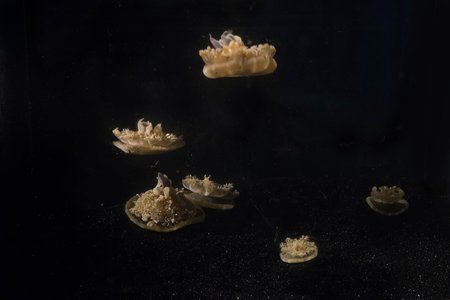 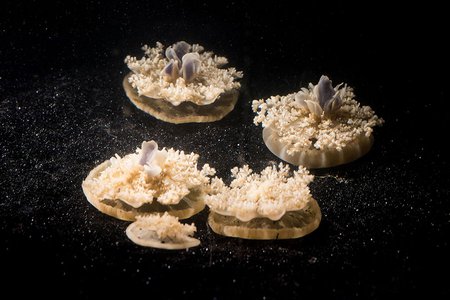 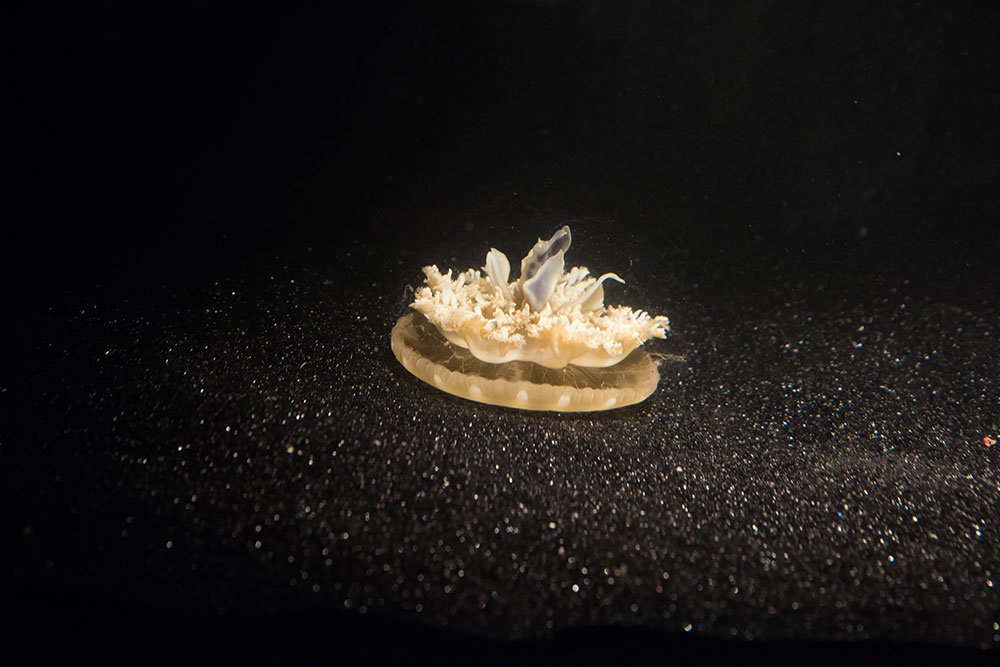 The Cassiopea jellyfish spends most of its life resting upside down on underwater surfaces.
Credit: Caltech
Download Full Image 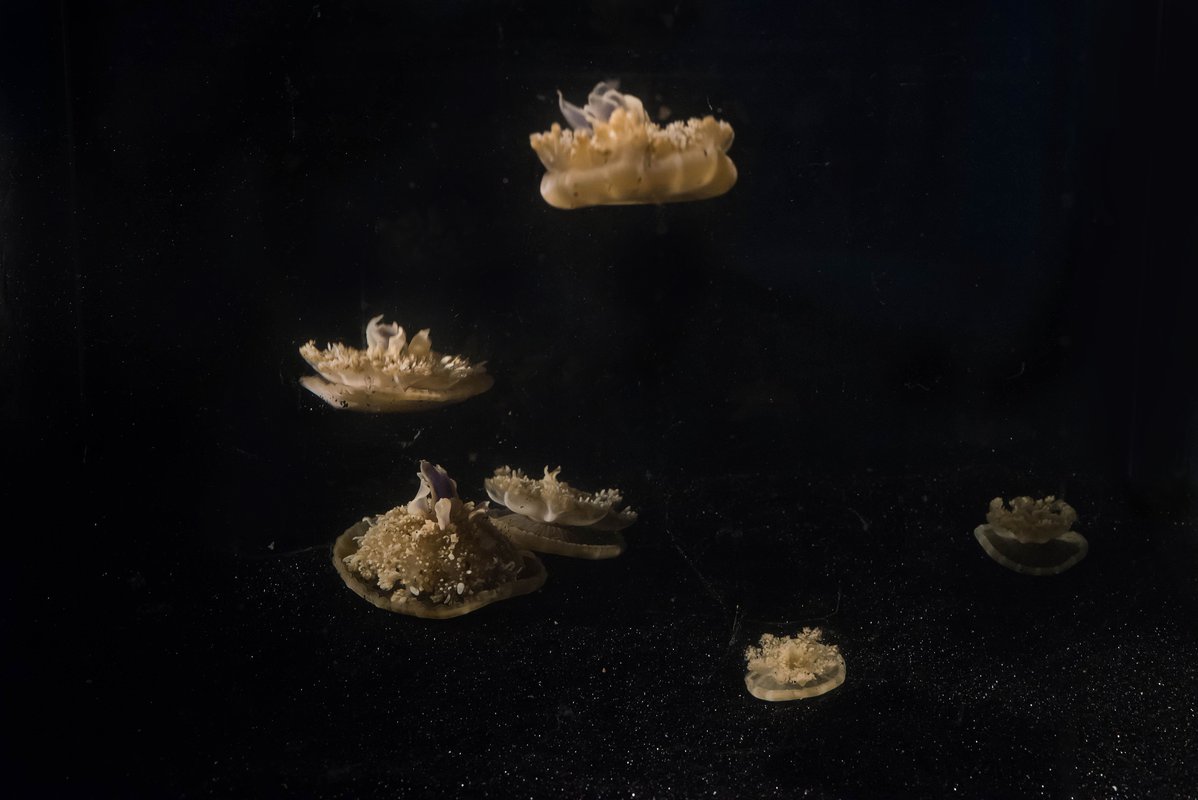 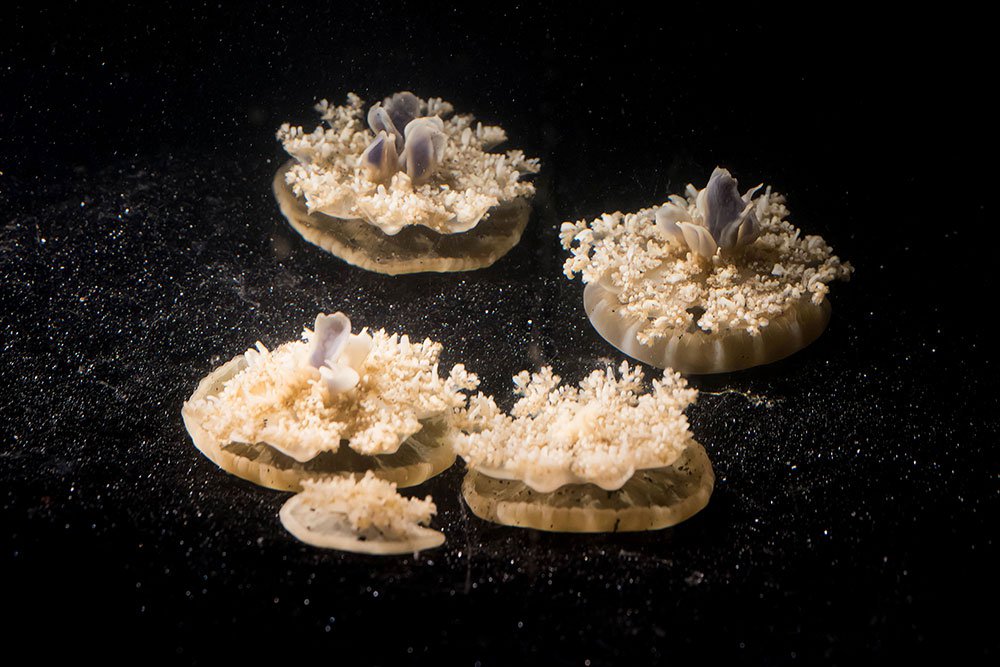