The "Supernova of a Generation" Shows Its Stuff

PASADENA, Calif.—It was the brightest and closest stellar explosion seen from Earth in 25 years, dazzling professional and backyard astronomers alike. Now, thanks to this rare discovery—which some have called the "supernova of a generation"—astronomers have the most detailed picture yet of how this kind of explosion happens. Known as a Type Ia supernova, this type of blast is an essential tool that allows scientists to measure the expansion of the universe and understand the very nature of the cosmos.

"What caused these explosions has divided the astronomical community deeply," says Shri Kulkarni, the John D. and Catherine T. MacArthur Professor of Astronomy and Planetary Sciences. But this new supernova—dubbed SN2011fe—can help astronomers solve this longstanding mystery. "SN2011fe is like the Rosetta Stone of Type Ia supernovae," says Kulkarni, who is also the principal investigator on the Palomar Transient Factory (PTF). Led by the California Institute of Technology (Caltech), the PTF is designed to survey the skies for transient flashes of light that last for a few days or months, such as those emitted by exploding stars.

On August 24, the PTF team discovered the supernova in one of the arms of the Pinwheel Galaxy (also called M101), 21 million light years away. They caught the supernova just 11 hours after it exploded.

"Never before have we seen a stellar thermonuclear explosion so soon after it happened," says Lars Bildsten, professor of theoretical astrophysics at the Kavli Institute for Theoretical Physics at UC Santa Barbara, and member of the PTF team, which described its supernova findings in the December 15 issue of the journal Nature.

The PTF team uses an automated system to search for supernovae, and because they were able to point their telescopes at SN2011fe so quickly after its detonation, the astronomers were able to put together a blow-by-blow analysis of the explosion, determining that the supernova involves a dense, Earth-sized object called a white dwarf and, most likely, a main-sequence star (a star in the main stage of its life).

Scientists have long suspected that Type Ia supernovae involve a binary system of two stars in orbit around each other, with one of those stars being a white dwarf. The white dwarf, which is made out of carbon and oxygen, explodes when matter from its companion star spills over onto its surface. But no one is sure what kind of star the companion is. Scientists have suggested that it's another white dwarf, a main-sequence star, a helium star, or a star in a late life stage that's puffed up into a red giant.

Still, because the explosion always involves a white dwarf, its overall brightness and behavior is relatively predictable, making it a useful tool for measuring distances. Since all Type Ia supernovae produce about the same amount of light, those that appear dimmer must be farther away. In this way, by measuring the brightness of supernovae, astronomers can use them as cosmic meter sticks to determine the size of the universe—and how fast it's expanding. In fact, the work that earned the 2011 Nobel Prize in physics—the discovery that the expansion of the universe is speeding up—was based on observations using Type Ia supernovae.

"This discovery is exciting because the supernova's infancy and proximity allows us to directly see what the progenitor system is," explains Mansi Kasliwal, an astronomer at the Carnegie Institution for Science who is a recent Caltech doctoral graduate and a coauthor on the paper. "We have expected for a while that a Type Ia supernova involves a carbon-oxygen white dwarf, but now we have direct evidence."

In the case of SN2011fe, the researchers were also able to deduce, by process of elimination, that the companion star is most likely a main-sequence star. How do they know?

If the companion was a red giant, the explosion of the white dwarf would send a shock wave through the red giant, heating it. This scenario would have generated several tens of times more light than the astronomers observed. Additionally, it happens that the Hubble Space Telescope took images of the location where SN2011fe lived before it blew up. When the researchers looked at the data, they found no evidence of red giants or helium stars.

These results—which they describe in a companion paper in the same issue of Nature—along with X-ray and radio observations that also fail to see any evidence for red giants or helium stars, rule those out as the companion. Caltech postdoc Assaf Horesh is the lead author on the paper describing the X-ray and radio data, which will be published in The Astrophysical Journal.

The astronomers have also observed, in unprecedented detail, the material that's blown off during the explosion. In particular, the team detected oxygen hurtling out from the supernova at speeds of over 20,000 kilometers per second—the first time anyone has seen high-speed oxygen coming from a Type Ia supernova, according to the researchers. "These observations probe the thin, outermost layers of the explosion," Bildsten says. "These are the parts that are moving the fastest, for which we have never been able to see this mix of atomic elements."

Not only was the supernova detected quickly, but the data processing—performed by researchers led by Peter Nugent, staff scientist at Lawrence Berkeley National Laboratory—was also done within hours. The machine-learning algorithms developed by Joshua Bloom, an associate professor at UC Berkeley, also helped make the fast find possible. And because the astronomers caught the blast so soon after it ignited, and because it's so close, the researchers say SN2011fe will become one of the best-studied supernovae ever.

"The rapid discovery and classification of SN2011fe—all on the same night—is a testament to the great teamwork between all the researchers from over a half a dozen institutions," Kulkarni says. "The future looks very bright. Soon we should be finding supernovae at an even younger age and thereby better understand how these explosions happen."

Nugent is the lead author on the Nature paper, which is titled, "Supernova 2011fe from an exploding carbon-oxygen white dwarf star." The lead author on the companion paper, "Exclusion of a luminous red giant as a companion star to the progenitor of supernova SN 2011fe," is Weidong Li of UC Berkeley. The Astrophysical Journal paper is titled, "Early radio and X-ray observations of the youngest nearby type Ia supernova PTF11kly (SN 2011fe)."

The Palomar Transient Factory (PTF) uses the 48-inch Oschin Schmidt telescope and the 60-inch telescope of the Palomar Observatory of Caltech for its observations and is a collaboration between Caltech, Columbia University, Las Cumbres Observatory Global Telescope, Lawrence Berkeley National Laboratory, Oxford University, UC Berkeley, and the Weizmann Institute of Science.

NOTE: Weidong Li died on December 12, just before the publication of these papers. 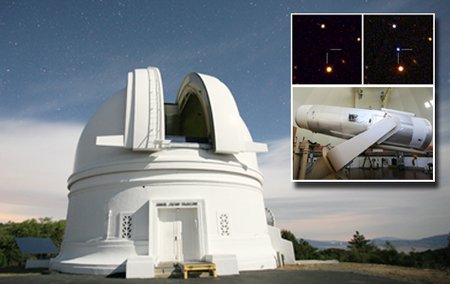 The 1.2-meter Samuel Oschin Telescope at Palomar Observatory that was used to discover four supernovae of a new class. Inset: one of the newly discovered supernovae, PTF09cnd. Credit: Credit: Caltech/Scott Kardel/Robert Quimby/modified from Nature
Image Lightbox 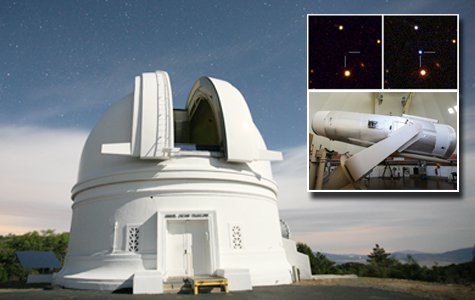