Caltech neuroscientists have looked inside brain cells as they undergo the intense bursts of neural activity known as "ripples" that are thought to underlie memory formation.

During ripples, a small fraction of brain cells, or neurons, fire synchronously in area CA1, a part of the hippocampus that is thought to be an important relay station for memories. "During a ripple, about 10 percent of the neurons in CA1 are activated, and these active neurons all fire within a tenth of a second," says Caltech graduate student Brad Hulse. "Two big questions have been: How do the remaining 90 percent of CA1 neurons stay quiet? And what is synchronizing the firing of the active neurons?"

In a new study, published online on February 17 in the journal Neuron, Hulse and his colleagues used a novel approach to show how the combination of excitatory and inhibitory inputs to CA1 work together to synchronize the firing of active neurons while keeping most neurons silent during ripples.

"For a long time, people studied these events by placing an electrode outside of a cluster of neurons. These extracellular recordings can tell you about the output of a group of brain cells, but they tell you very little about the inputs they're receiving," says study coauthor and Caltech research scientist Evgueniy Lubenov.

The Caltech scientists combined extracellular recording with a technique to look inside a neuron during ripples. They used fine glass pipettes with tips thinner than a tenth of the width of a human hair to measure directly the voltage difference, or "electrical potential," across the cellular membrane of individual neurons in awake mice.

Employing these two techniques in tandem allowed the scientists to monitor the activity inside a single neuron while still observing how the larger network was behaving. This in turn enabled them to piece together how excitatory inputs from CA3, a hippocampal region where memories are formed, affect the output of brain cells called pyramidal neurons in CA1. These neurons are important for transferring newly coded memories to other brain areas such as the neocortex for safekeeping and long-term storage. Ripples are thought to be the mechanism by which this transfer occurs.

The team discovered that the membrane potential of CA1 pyramidal cells increases during ripples. Surprisingly, this increase is relatively constant and independent of the strength of the input from CA3. For this to be the case, the direct excitation from CA3 must be balanced by proportional inhibition. The source of this inhibition is presumed to be a class of brain cells called feedforward interneurons, which receive direct inputs from CA3 and inhibit CA1 pyramidal cells.

"There seems to be a circuit mechanism that balances excitation and inhibition, so that for most neurons, these two forces cancel out," says study leader Thanos Siapas, professor of computation and neural systems at Caltech.

Without a balanced inhibition, all of the neurons in CA1 could fire when the excitatory input is large enough. "This could cause runaway excitation and possibly trigger a seizure," says Hulse, who is the first author of the new study.

The team's finding explains why most CA1 pyramidal neurons remain silent during ripples, but it raises two important questions: Why do any neurons fire at all? And what controls the precise timing of those that do fire?

The Caltech researchers found that active neurons receive a much stronger excitatory input from CA3 than silent neurons do—one that is large enough to overcome the balancing inhibition. This large excitation originates from CA3 neurons with particularly strong connections to the active CA1 neurons. These connections are believed to be modified during behavior to encode memories.

Hence, it is the specific identity of CA3 neurons, rather than their sheer number, that is responsible for making CA1 neurons fire, the researchers say. This system might seem overly complex and redundant, but the end result is a flexible circuit—an ever-changing mosaic of active and inactive pyramidal neurons. "It's a shifting mosaic, but it's one that is dependent on the organism's memories and experience," Siapas says.

How do ripples exert their influence on the rest of the brain? The membrane potential of each neuron oscillates very rapidly during ripples to synchronize the firing of cells to within a few thousandths of a second. "By coordinating their activities, the CA1 neurons are maximizing the impact of their output on downstream areas of the brain. The overall effect is more powerful than if each neuron fired independently," Lubenov says. "It is the difference between clapping independently or in unison with others at a concert. The effect in the latter case is stronger, even with the same number of people applauding."

The paper, "Membrane Potential Dynamics of CA1 Pyramidal Neurons during Hippocampal Ripples in Awake Mice," is also coauthored by Laurent C. Moreaux, a research scientist at Caltech. Funding for the work was provided by the Mathers Foundation, the Gordon and Betty Moore Foundation, the National Institutes of Health, and the National Science Foundation. 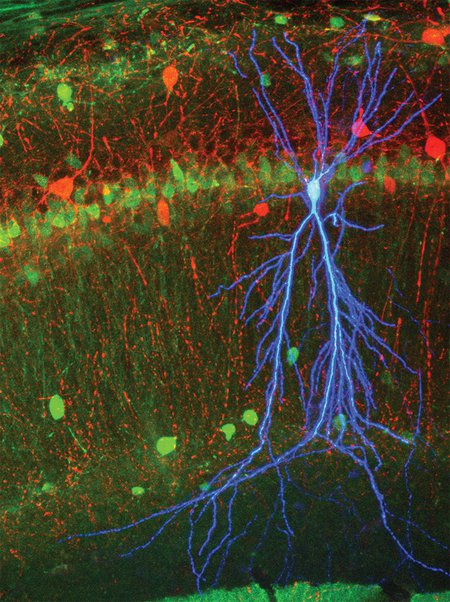 This image shows a stained pyramidal cell, shown in blue, in area CA1 of the mouse hippocampus. Neurons expressing calbindin are shown in green and inhibitory neurons expressing parvalbumin are shown in red. During intracellular recording of the neuron's membrane potential, the pyramidal cell was filled with dye so it could be located and Imaged. Credit: Image courtesy of T. Siapas/Caltech
Image Lightbox 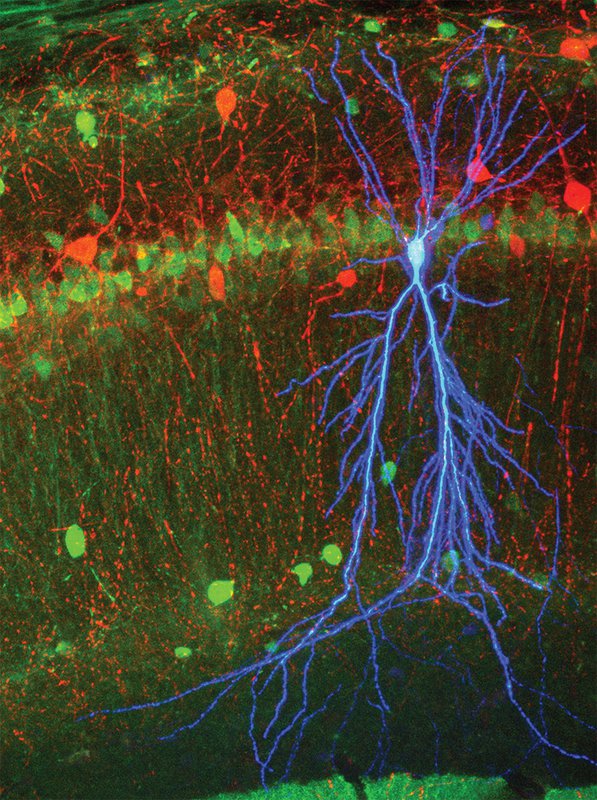 This image shows a stained pyramidal cell, shown in blue, in area CA1 of the mouse hippocampus. Neurons expressing calbindin are shown in green and inhibitory neurons expressing parvalbumin are shown in red. During intracellular recording of the neuron's membrane potential, the pyramidal cell was filled with dye so it could be located and Imaged.
Credit: Image courtesy of T. Siapas/Caltech
Download Full Image
Subscribe
The Caltech Weekly