Students to Plan Moon Base for Deep-Space Exploration

Humans have set foot on the moon and may one day walk on Mars, but to push farther into space we will likely need a pit stop. With that in mind, 32 students from around the world will meet up at Caltech from March 26–31 for the 2017 Caltech Space Challenge, a competition to design a launch-and-supply station—dubbed Lunarport—for future space missions. The event is organized by the Graduate Aerospace Laboratories of the California Institute of Technology (GALCIT) to help mentor the next generation of aerospace engineers.

During the weeklong biennial event, the students—a mix of graduate and undergraduate—are divided into two teams, each of which has just five days to create a fresh design to tackle an upcoming space-exploration challenge. At the first Caltech Space Challenge in 2011, the teams were tasked with exploring an asteroid and returning with a sample of rock or ice. In 2013, the teams designed campaigns to land humans on a martian moon. That year, the winning team proposed a robotic precursor mission followed up by a three-astronaut exploration of both of Mars' moons, Phobos and Deimos. And at the most recent Caltech Space Challenge, in 2015, the students planned a mission to an asteroid that had been brought into lunar orbit, to extract its resources and demonstrate how they could be used.

The goal of every competition is to present students with a challenge that humanity is expected to face in the not-too-distant future. For example, a station like the Lunarport, if constructed someday, would provide a staging facility for heavy payloads, at which rockets could be refueled to continue their journey to deep space.

While working on the challenge, the students will also receive expert guidance via lectures from engineers at Orbital ATK, Blue Origin, the Jet Propulsion Laboratory (JPL, which Caltech manages for NASA), and other organizations. At the end of the week, each team will present its solution, and a winner will be selected by a jury of industry experts.

This year, 806 students applied to participate in the event—more than the combined number of applicants for the three prior Caltech Space Challenges. The 32 successful applicants come from 14 different countries on four continents. 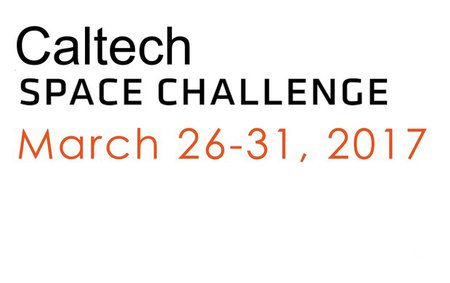