Galaxies grow by accumulating gas from their surroundings and converting it to stars, but the details of this process have remained murky. New observations, made using the Keck Cosmic Web Imager (KCWI) at the W. M. Keck Observatory in Hawaii, now provide the clearest, most direct evidence yet that filaments of cool gas spiral into young galaxies, supplying the fuel for stars.

"For the first time, we are seeing filaments of gas directly spiral into a galaxy. It's like a pipeline going straight in," says Christopher Martin, a professor of physics at Caltech and lead author of a new paper appearing in the July 1 issue of the journal Nature Astronomy. "This pipeline of gas sustains star formation, explaining how galaxies can make stars on very fast timescales."

For years, astronomers have debated exactly how gas makes its way to the center of galaxies. Does it heat up dramatically as it collides with the surrounding hot gas? Or does it stream in along thin dense filaments, remaining relatively cold? "Modern theory suggests that the answer is probably a mix of both, but proving the existence of these cold streams of gas had remained a major challenge until now," says co-author Donal O'Sullivan (MS '15), a PhD student in Martin's group who built part of KCWI.

KCWI, designed and built at Caltech, is a state-of-the-art spectral imaging camera. Called an integral-field unit spectrograph, it allows astronomers to take images such that every pixel in the image contains a dispersed spectrum of light. Installed at Keck in early 2017, KCWI is the successor to the Cosmic Web Imager (CWI), an instrument that has operated at Palomar Observatory near San Diego since 2010. KCWI has eight times the spatial resolution and 10 times the sensitivity of CWI.

"The main driver for building KCWI was understanding and characterizing the cosmic web, but the instrument is very flexible, and scientists have used it, among other things, to study the nature of dark matter, to investigate black holes, and to refine our understanding of star formation," says co-author Mateusz (Matt) Matuszewski (MS '02, PhD '12), a senior instrument scientist at Caltech.

The question of how galaxies and stars form out of a network of wispy filaments in space—what is known as the cosmic web—has fascinated Martin since he was a graduate student. To find answers, he led the teams that built both CWI and KCWI. In 2017, Martin and his team used KCWI to acquire data on two active galaxies known as quasars, named UM 287 and CSO 38, but it was not the quasars themselves they wanted to study. Nearby each of these two quasars is a growing galaxy within its own giant nebula, larger than the Milky Way and visible thanks to the strong illumination of the quasars. By looking at light emitted by hydrogen in the nebulas—specifically an atomic emission line called hydrogen Lyman-alpha—they were able to map the velocity of the gas. From previous observations at Palomar, the team already knew there were signs of rotation in the nebulas, but the Keck data revealed much more.

"When we used Palomar's CWI previously, we were able to see what looked like a rotating disk of gas, but we couldn't make out any filaments," says O'Sullivan. "Now, with the increase in sensitivity and resolution with KCWI, we have more sophisticated models and can see that these objects are being fed by gas flowing in from attached filaments, which is strong evidence that the cosmic web is connected to and fueling this disk."

Martin and colleagues developed a mathematical model to explain the velocities they were seeing in the gas and tested it on the galaxies near UM 287 and CSO 38 as well as on a simulated galaxy.

"It took us more than a year to come up with the mathematical model to explain the radial flow of the gas," says Martin. "Once we did, we were shocked by how well the model works."

The findings provide the best evidence to date for the cold-flow model of galaxy formation, which basically states that cool gas can flow directly into forming galaxies, where it is converted into stars. Before this model came into popularity, researchers had proposed that galaxies pull in gas and heat it up to extremely high temperatures. From there, the gas was thought to gradually cool, providing a steady but slow supply of fuel for stars. In 1996, research from Caltech's Charles (Chuck) Steidel, the Lee A. DuBridge Professor of Astronomy and a co-author of the new study, threw this model into question. He and his colleagues showed that distant galaxies produce stars at a very high rate—too fast to be accounted for by the slow settling and cooling of hot gas that was a favored model for young galaxy fueling.

"Through the years, we've acquired more and more evidence for the cold-flow model," says Martin. "We have nicknamed our new version of the model the 'cold-flow inspiral,' since we see the spiraling pattern in the gas."

"These type of measurements are exactly the kind of science we want to do with KCWI," says John O'Meara, the Keck Observatory chief scientist. "We combine the power of Keck's telescope size, powerful instrumentation, and an amazing astronomical site to push the boundaries of what's possible to observe. It's very exciting to see this result in particular, since directly observing inflows has been something of a missing link in our ability to test models of galaxy formation and evolution. I can't wait to see what's coming next."

The new study, titled, "Multi-Filament Inflows Fuel Young Star Forming Galaxies," was funded by the National Science Foundation (NSF), the W. M. Keck Observatory, Caltech, and the European Research Council. KCWI is funded by NSF, Keck Observatory, the Heising-Simons Founcation and Caltech. The galaxy simulations were performed at NASA Advanced Supercomputing at NASA Ames Research Center. Other Caltech authors include former postdoc Erika Hamden, now at the University of Arizona; Patrick Morrissey, a visitor in space astrophysics who also works at JPL, which is managed by Caltech for NASA; and research scientist James D. (Don) Neill. 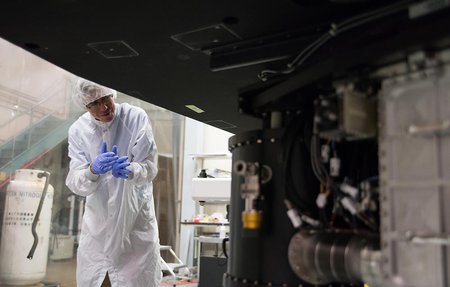 Chris Martin, the principal investigator of the Keck Cosmic Web Imager, inspects the instrument in a clean room at Caltech. Credit: Caltech 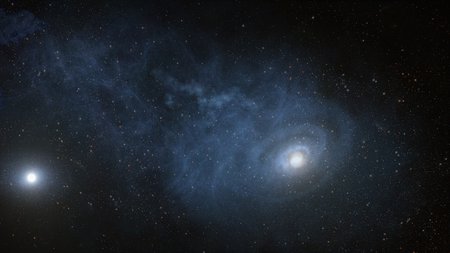 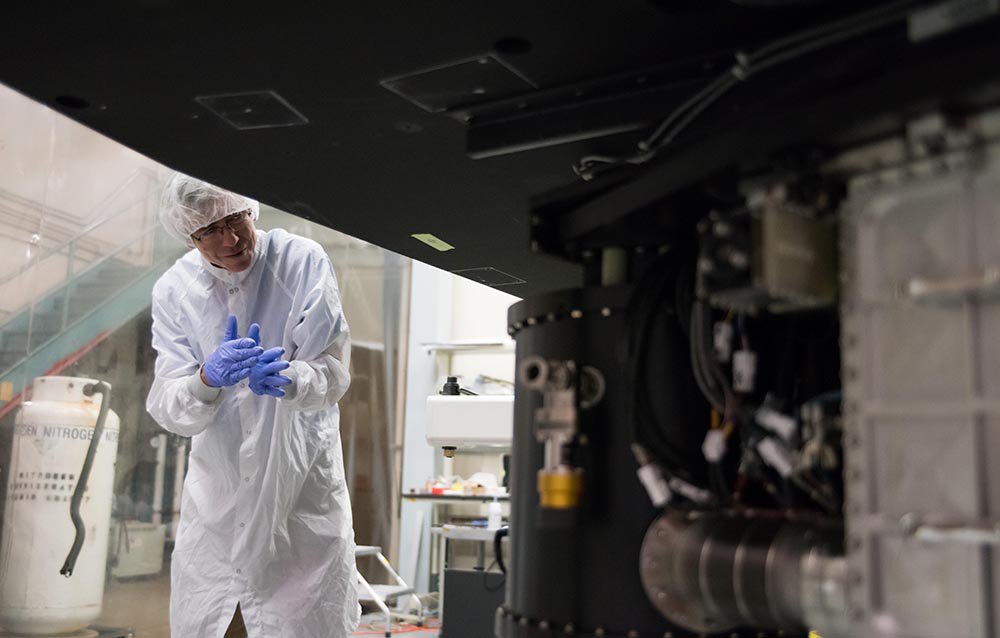 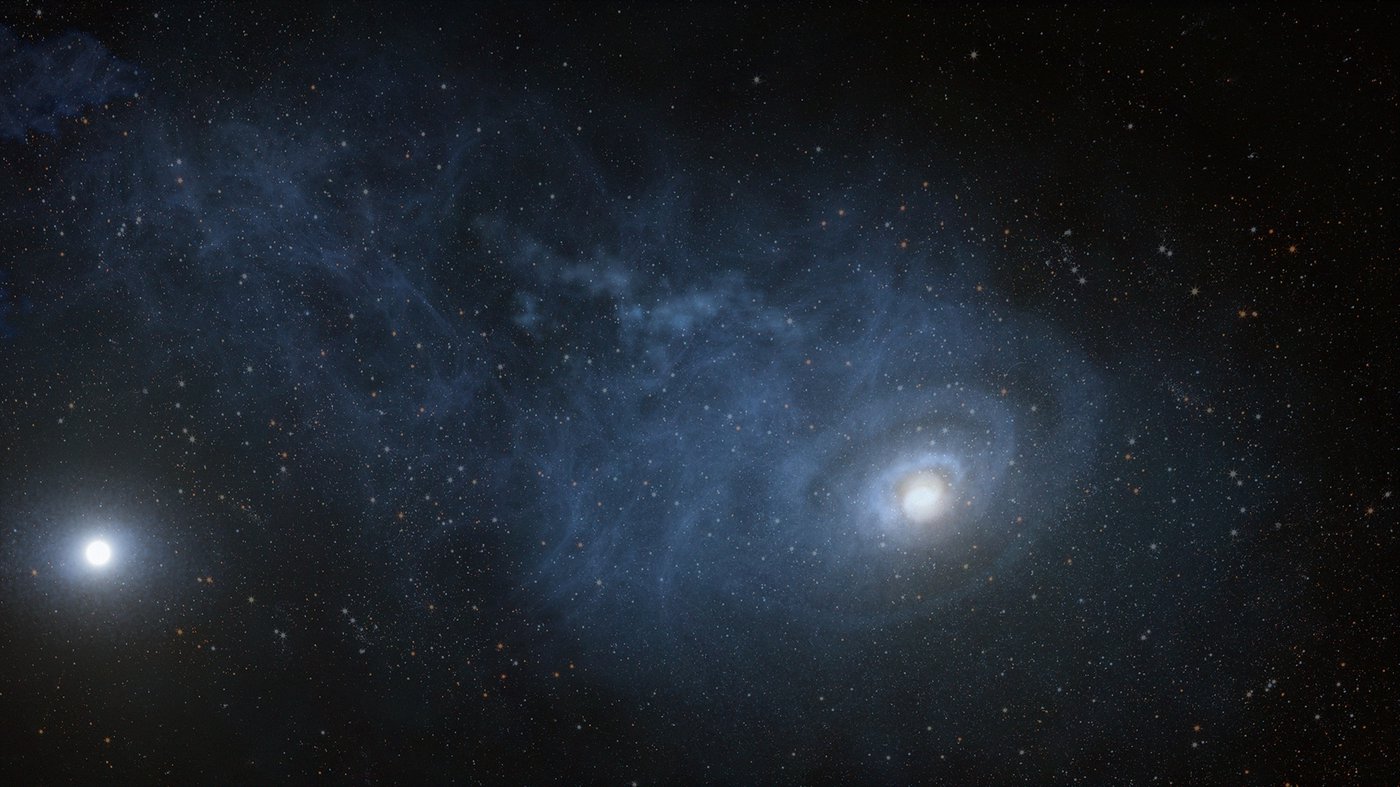 Artist's animation of a growing galaxy shows gas spiraling in toward its center. New observations from the Keck Cosmic Web Imager provide the best evidence yet that cold gas spirals directly into growing galaxies via filamentous structures. Much of this gas ends up being converted into stars. Credit: Adam Makarenko/W. M. Keck Observatory
Image Lightbox
Subscribe
The Caltech Weekly