A standing room only crowd packed into the Hameetman Auditorium of the Cahill Center for Astronomy and Astrophysics at Caltech on May 19 to hear Gwynne Shotwell, president and chief operating officer of SpaceX. Shotwell had been invited by the Caltech Division of Engineering and Applied Science (EAS) to deliver the 2017 Victor Wouk Lecture, outlining SpaceX's planned path to a human settlement on Mars.

Shotwell, who joined SpaceX in 2002, described both the business and technological advances that she hopes will allow SpaceX to pave the way for humanity to become an interplanetary species within 10 years.

Mars is "a fixer-upper planet, but it does provide some optionality for ensuring the human race survives," she said.

Shotwell opened the lecture by showing a video of what she described as one of her top two moments at SpaceX: the first successful landing of one of SpaceX's Falcon 9 rockets in December 2015. In March of this year, SpaceX again made history by relaunching a used Falcon 9 rocket.

"The path to Mars for SpaceX has always depended on our ability to land and re-fly our rocket stages, both from a value proposition for generating cash for our company as well as ensuring that the rides ... are inexpensive enough so that people could go," Shotwell said, adding that "if you can't land the rocket and re-fly it, it's a one-way trip [to Mars]."

One of the next steps that SpaceX plans to take, Shotwell said, is the creation of a global broadband network running on a constellation of about 4,000 satellites. The company hopes to begin launching the satellites in 2019. Though providing internet service may seem counterintuitive for a company with its eyes fixed on Mars, the move makes sense from both a business and technological perspective, she said.

Not counting the potential market for ferrying passengers to space, the total market for launching satellites and equipment into space maxes out at about $8–10 billion. Of that, SpaceX can only really hope to someday nab half, she said. "It's hard to fund the opportunity and development to get to Mars on that revenue stream," she said. The total market for global broadband internet is more like $1 trillion.

Even if SpaceX's eventual constellation only corners a small percentage of the market, it will boost SpaceX's revenue stream by a factor of 10. "With that revenue stream, I can pay to go to Mars," she said. Additionally, it will be real-world practice for creating a communication network around Mars one day, she said.

Shotwell was asked by a member of the audience why SpaceX, as a private company, has been able to develop reusable spacecraft, unlike government agencies. In response, she highlighted the importance of SpaceX's partnership with NASA.

"A private company has the flexibility to do things the way we want to do it. ... But frankly, I think without a lot of the experience from the Apollo and Shuttle days, we wouldn't be doing what we're doing today," she said, noting that NASA, while a SpaceX customer, was the company's partner during the development of the Dragon spacecraft, a reusable spacecraft that SpaceX uses to transport cargo to the International Space Station. "We were standing on the shoulders of the giants who came before us."

The Wouk lectureship was established in 2004 by the Wouk family to bring to campus experts on the latest advances in science and technology. It was named in honor of Caltech alumnus Victor Wouk, who received his master's and doctorate degrees in electrical engineering from Caltech in 1940 and 1942, respectively. He devoted himself largely to developing hybrid motor vehicles and using semiconductors in electric vehicles. Wouk's interest in space travel began as a child, and as an adult, he ended up working with the team that developed fuel gauges for the "dune buggies" that roamed the surface of the moon during the Apollo program. 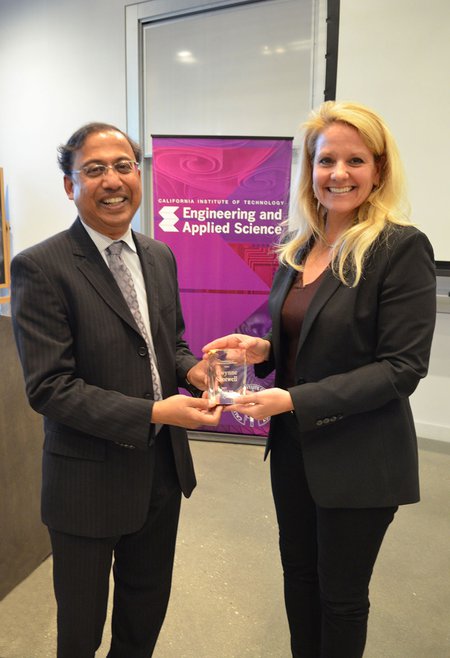 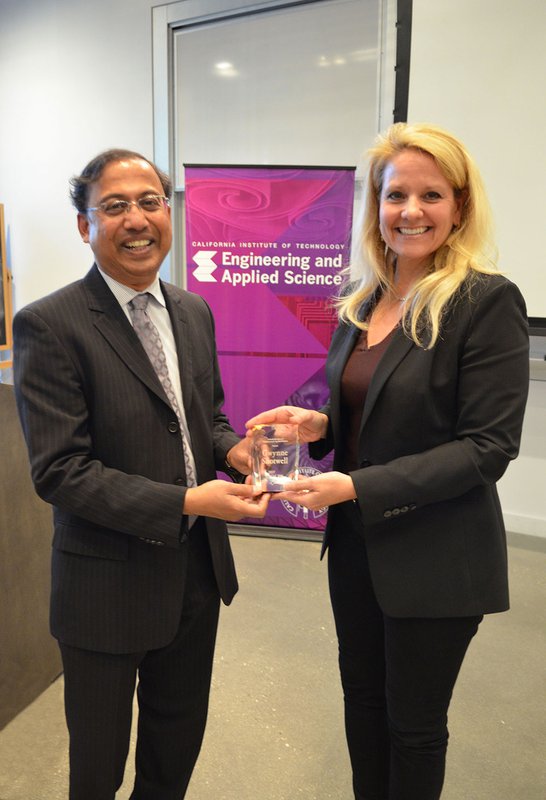