Spacecraft to Speed Through Sun's Atmosphere and Snag Solar Wind

A new NASA mission, set to launch on August 11, will whip through the sun's sizzling outer atmosphere, or corona, flying closer to the sun than any spacecraft before it. Observations by the mission, called the Parker Solar Probe, will lead to better predictions of space weather and address fundamental mysteries about the sun's dynamic corona.

One of these mysteries has to do with high-speed solar particles that zip toward Earth at close to the speed of light. Scientists know the particles originate in the corona but they don't understand how they are being accelerated. To address the question, a team led by Mark Wiedenbeck of the Jet Propulsion Laboratory and including members from Caltech and NASA's Goddard Space Flight Center, developed one of several instruments onboard the Parker Solar Probe, called the Energetic Particle Instrument-Hi, or EPI-Hi. (The instrument has a partner, EPI-Lo, and both are overseen by the dual instrument's principal investigator, David McComas of Princeton University.)

"We will be exploring a region of space that has never before been visited," says Wiedenbeck (PhD '78), a Caltech alumnus who studied under Ed Stone—an investigator on the EPI-Hi instrument and the David Morrisroe Professor of Physics at Caltech."We have ideas about what will be found, but the most important results may well come from observations that are completely unexpected," says Wiedenbeck.

The namesake of the mission is another Caltech alumnus, 91-year-old Eugene Parker (PhD '51), who predicted, in 1958, the existence of a supersonic solar wind—a flow of charged particles that stream off the sun, accelerating at speeds faster than that of sound.

"Many of his colleagues thought he must be wrong, but when Mariner 2 was on the trip to Venus in 1962, it revealed that a supersonic wind was always present," says Stone, who is also the longtime project scientist for NASA's Voyager mission, which includes Voyager 1 and 2—both launched in 1977 on tours of the solar system. The Voyager spacecraft each have instruments similar to EPI-Hi that are designed to detect charged particles from the sun, planetary radiation belts, and beyond our solar system.

Stone, who worked across the hall from Parker in the early 1960s at the University of Chicago, says that Parker also correctly predicted that the solar wind would create a large bubble around the sun, now called the heliosphere. "In 2012, Voyager 1 finally left the bubble first predicted by Parker, entering interstellar space," he says.

This movie taken by the ESA/NASA SOHO spacecraft shows the outer corona of the sun. An erupting cloud of gas, called a coronal mass ejection (CME), is seen close to the end of the movie, with the solar protons—a flood of subatomic particles—disturbing the images very soon after the CME. Image credit: SOHO (ESA & NASA)

The Parker Solar Probe will study the source of the solar wind: the sun's blistering corona, with temperatures of several million degrees Celsius. When the solar wind slams into Earth's atmosphere, it sometimes creates beautiful, glowing aurorae, but can also lead to harmful "space weather" that disrupts satellite communications and navigation systems.

Of particular interest to the EPI-Hi team is the unsolved riddle of how a small fraction of the solar-wind charged particles reach near-light speeds.

"When the sun is active, it can suddenly eject a billion tons of material that creates a shock wave traveling at speeds up to 10 million kilometers per hour. These shocks accelerate protons, electrons, and heavier ions that can reach Earth in less than an hour, creating space weather hazards to humans and hardware in space," says EPI-Hi team member Richard Mewaldt, a research professor of physics at Caltech who has been studying high-energy particles in space for 47 years.

"We believe that these solar-wind charged particles, the nuclei of atoms, get bounced around by shock waves like ping pong balls, gaining more and more speed," says Stone. (A similar phenomenon is thought to happen outside our solar system, except there the particles are known as cosmic rays.) "We have been observing from a distance the effects of what is happening near the sun. Now we will fly through the region where it is happening. This should provide us with new clues about the process," he says.

The team says that figuring out how the sun accelerates particles to high energy will also rely on complementary measurements from other instruments onboard the Parker Solar Probe—instruments that will measure the solar wind, turbulent magnetic fields, radio bursts, and other phenomena.

After launch, the Parker Solar Probe will swing by Venus for a gravitational boost toward the sun. The spacecraft, protected by a thermal shield, will ultimately circle the sun two dozen times over seven years. At closest approach, it will skim about 6 million kilometers above the sun's surface; at that point, it will be the fastest spacecraft of all time, traveling fast enough to get from Los Angeles to New York in less than 20 seconds. The mission's first batch of data is expected to arrive on Earth in December.

The joint EPI-Hi and EPI-Lo investigation, called the Integrated Science Investigation of the Sun, is led by Princeton University. EPI-Hi was built largely at Caltech, with significant contributions from the Southwest Research Institute and NASA's Goddard Space Flight Center. EPI-Lo was built by Johns Hopkins University Applied Physics Laboratory. The Integrated Science Investigation of the Sun Operations Center is located at the University of New Hampshire in Durham. 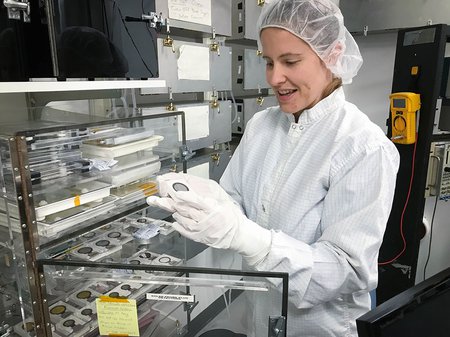 Jamie Rankin is seen holding a silicon detector similar to the ones onboard NASA's Parker Solar Probe. She helped test the detectors, getting them ready for flight, at Caltech. Credit: Caltech 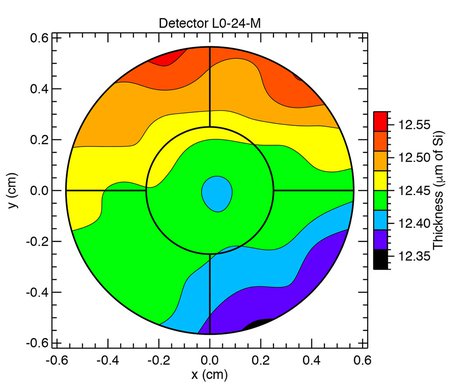 A map showing the uniformity of a silicon detector similar to those onboard NASA's Parker Solar Probe. The detectors are very thin, less than one-eighth the thickness of a sheet of paper, and they vary by no more than about 10 percent. Thin detectors are essential because low-energy particles must be able to penetrate through other detectors in the stack before losing all of their energy. Credit: Mark Wiedenbeck/JPL 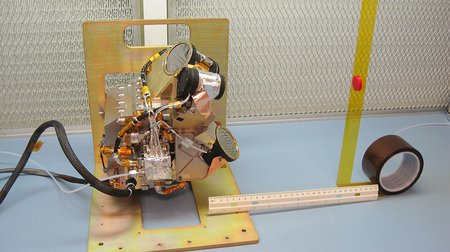 The EPI-Hi instrument before it was integrated with the Parker Probe spacecraft. Credit: Branislav Kecman and EPI-Hi Team/Caltech
Image Gallery Lightbox 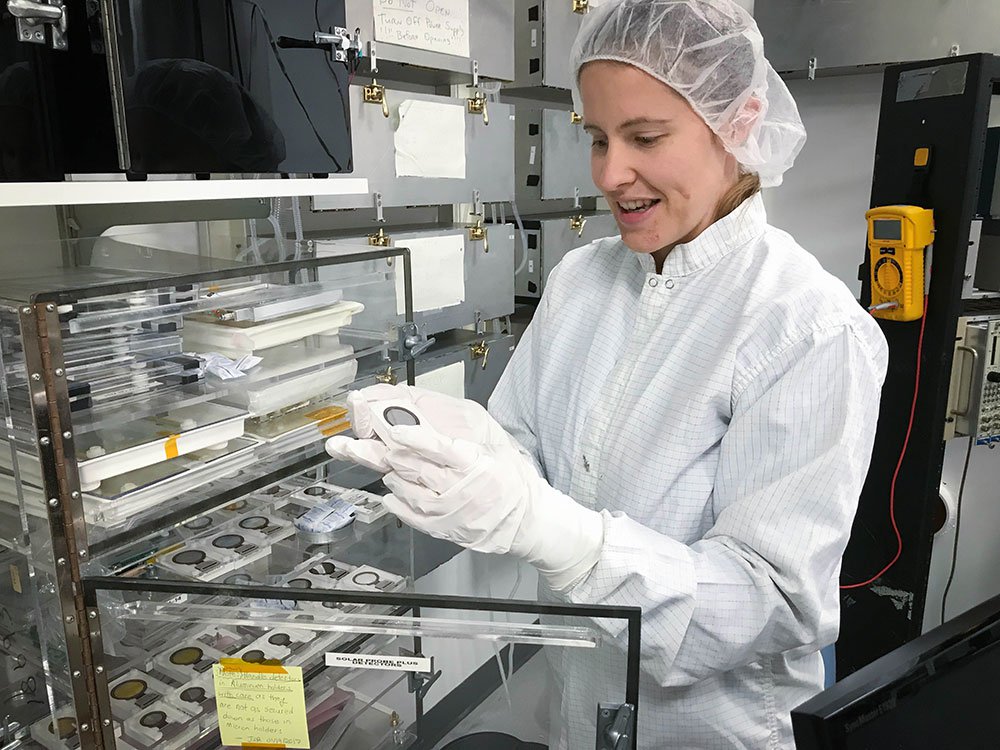 Jamie Rankin is seen holding a silicon detector similar to the ones onboard NASA's Parker Solar Probe. She helped test the detectors, getting them ready for flight, at Caltech.
Credit: Caltech
Download Full Image 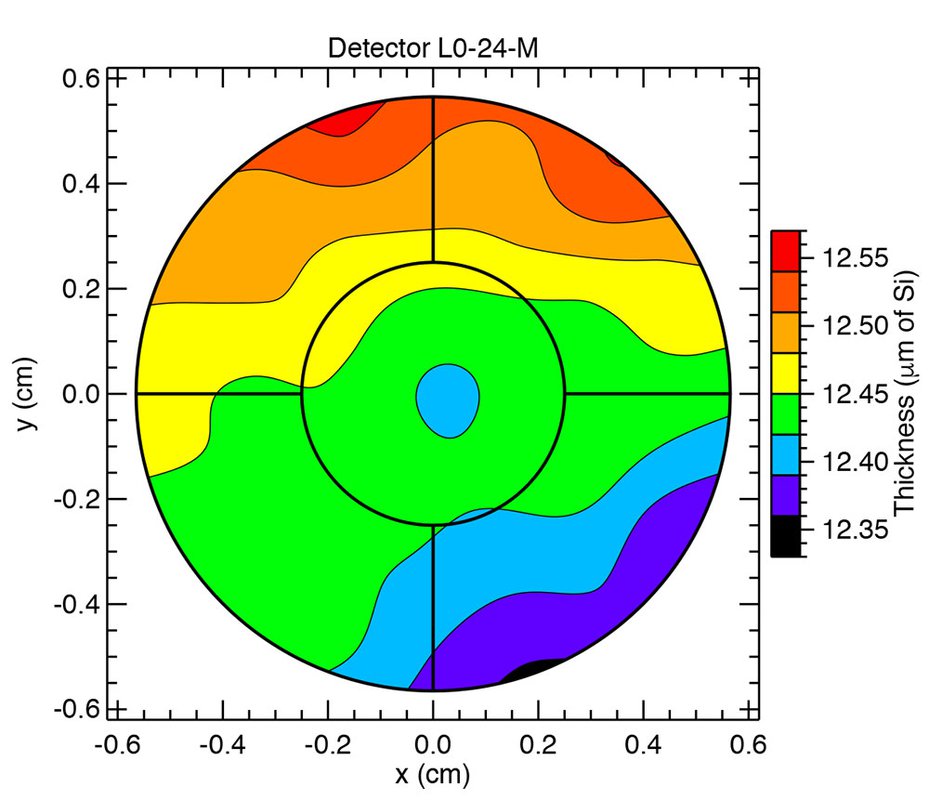 A map showing the uniformity of a silicon detector similar to those onboard NASA's Parker Solar Probe. The detectors are very thin, less than one-eighth the thickness of a sheet of paper, and they vary by no more than about 10 percent. Thin detectors are essential because low-energy particles must be able to penetrate through other detectors in the stack before losing all of their energy.
Credit: Mark Wiedenbeck/JPL
Download Full Image 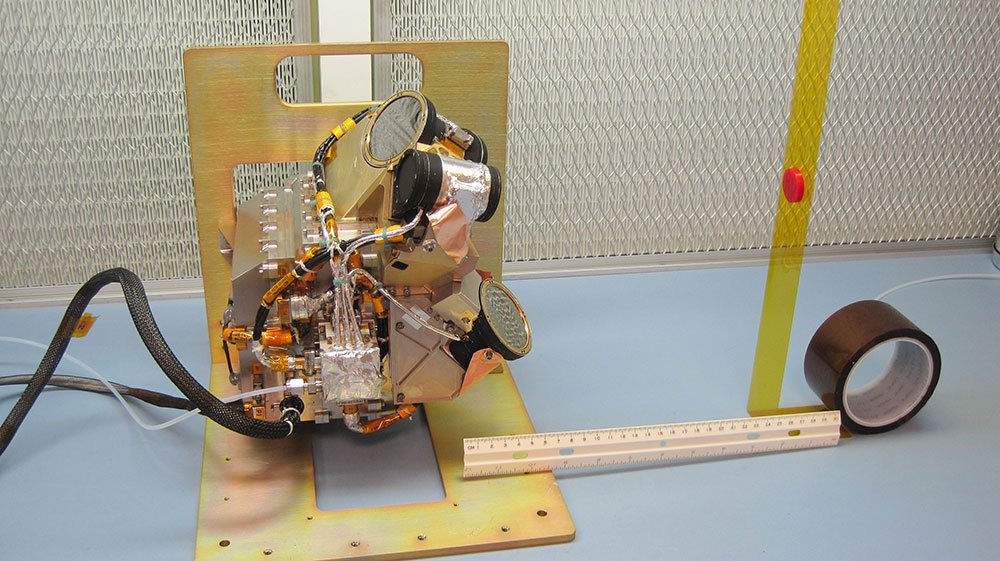 The EPI-Hi instrument before it was integrated with the Parker Probe spacecraft.
Credit: Branislav Kecman and EPI-Hi Team/Caltech
Download Full Image