In an effort to reduce carbon dioxide emissions in our environment and begin a campuswide shift to the use of renewable resources, a research group led by Steven Low, professor of computer science and electrical engineering in the engineering and applied science division, has installed 54 electric vehicle (EV) charging stations for use by all Caltech and JPL personnel and visitors. The stations, four of which are handicapped-accessible, were first installed in the California Parking Structure in February and are currently free to use.

Depending on a car's charger, the stations will fully charge an EV in about five hours. Users can monitor the stations—whether they are occupied or available, as well as whether the occupied stations are currently charging or done charging—via the Caltech Adaptive Charging Network (ACN) site at http://ev.caltech.edu/.

"Electrification of our transportation system will be important because today vehicles consume more than a quarter of our energy and emit more than a quarter of our energy-related carbon dioxide [CO2]," says Low, who was awarded a Caltech Innovation Initiative (CI2) grant last year to fund the design, building, and installation of the EV charging system, as well as its power-distribution infrastructure. "Electrification will not only greatly reduce CO2 emission, but EVs can also be critical resources to help integrate renewable sources, such as wind and solar power, into our electric grid. One of the key enablers to mass EV adoption is the availability of smart charging networks."

Because there are now so many stations on campus and charging EVs can require a substantial amount of electricity (most EVs charge at 7 kilowatts, the equivalent of simultaneously running 70 desktop computers), Low developed Caltech's adaptive charging network, which uses a smart algorithm to coordinate the charging schedule with the Institute's existing electrical infrastructure. This program helps minimize energy usage; as of now, the stations are consuming about 200 kilowatt-hours per day, only a fraction (0.00006 percent) of Caltech's total electrical usage. And, according to John Onderdonk, director of sustainability programs at Caltech, about 30 percent of the electricity at each charging station is from carbon-free renewable sources.

The ACN project is helping the Institute prepare for the vehicle of the future, Onderdonk notes. "Caltech's Facilities Management department is also benefiting from the project by learning about EV use patterns so that we can identify the opportunities and challenges that may come with integrating large numbers of EVs into the campus electrical infrastructure," he says.

"We believe having ample charging stations available is the key to widespread EV adoption," says George Lee (MS '10), who is volunteering in Low's lab to continue contributing to this project. "Most installations outside Caltech only have a few EV charging stations, due to the high cost of upgrading electrical infrastructure and construction. Our technique allows a large number of stations to be installed at a reasonable cost."

Low's CI2 funding will allow the charging stations to be free to use until the end of the academic year. After that—and depending on renewal of the CI2 grant for phase 2 of the project, which would be focused on further developing the software based on data collected from the newly installed chargers—there will be a potential cost of less than $0.20 per kilowatt-hour. (Private residences purchasing energy from Pasadena Water and Power spend between $0.13 and $0.38 per kilowatt-hour delivered, depending on the specific plan and time of day.) While charging at home at night is the cheapest option, says Lee, charging during the day is cheaper at Caltech, where the rate is the same at all times, than at a private residence. "This financial structure helps maximize EV adoption because it allows for people who cannot install chargers at home to own an EV at reasonable electricity costs," Lee says.

When the research project concludes in April 2017, the chargers will become the property of Caltech's facilities department, at which point their fee structure will need to be reassessed. In addition to the current installation, Low foresees the need for additional charging stations in the future as EV use increases. 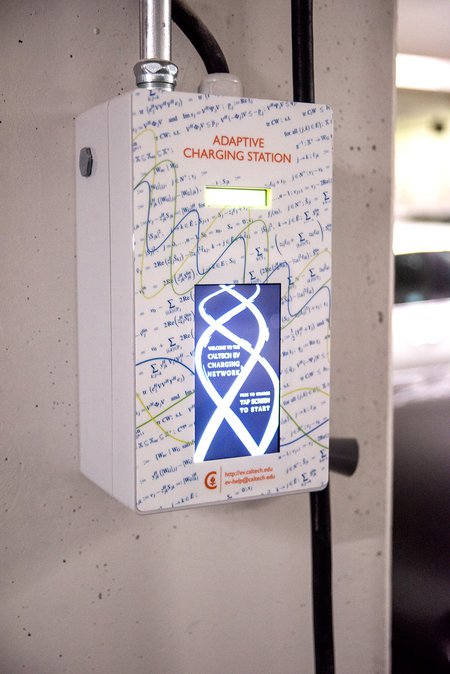 Each of Caltech's 54 EV charging stations in the California parking structure has a touch-screen LCD to facilitate user interaction. The chargers are all connected in an adaptive charging network, which uses a smart algorithm to coordinate the charging schedule to minimize energy usage. Credit: Caltech
Image Lightbox 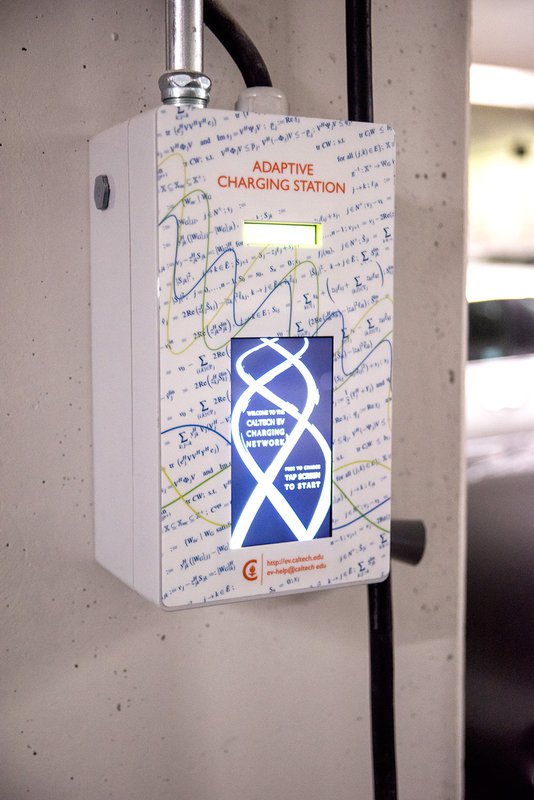 Each of Caltech's 54 EV charging stations in the California parking structure has a touch-screen LCD to facilitate user interaction. The chargers are all connected in an adaptive charging network, which uses a smart algorithm to coordinate the charging schedule to minimize energy usage.
Credit: Caltech
Download Full Image
Subscribe
The Caltech Weekly