Slimy Fish and the Origins of Brain Development

Lamprey—slimy, eel-like parasitic fish with tooth-riddled, jawless sucking mouths—are rather disgusting to look at, but thanks to their important position on the vertebrate family tree, they can offer important insights about the evolutionary history of our own brain development, a recent study suggests.

The work appears in a paper in the September 14 advance online issue of the journal Nature.

"Lamprey are one of the most primitive vertebrates alive on Earth today, and by closely studying their genes and developmental characteristics, researchers can learn more about the evolutionary origins of modern vertebrates—like jawed fishes, frogs, and even humans," says paper coauthor Marianne Bronner, the Albert Billings Ruddock Professor of Biology and director of Caltech's unique Zebrafish/Xenopus/Lamprey facility, where the study was done.

The facility is one of the few places in the world where lampreys can be studied in captivity. Although the parasitic lamprey are an invasive pest in the Great Lakes, they are difficult to study under controlled conditions; their lifecycle takes up to 10 years and they only spawn for a few short weeks in the summer before they die.

Each summer, Bronner and her colleagues receive shipments of wild lamprey from Michigan just before the prime of breeding season. When the lamprey arrive, they are placed in tanks where the temperature of the water is adjusted to extend the breeding season from around three weeks to up to two months. In those extra weeks, the lamprey produce tens of thousands of additional eggs and sperm, which, via in vitro fertilization, generate tens of thousands of additional embryos for study. During this time, scientists from all over the world come to Caltech to perform experiments with the developing lamprey embryos.

In the current study, Bronner and her collaborators—who traveled to Caltech from Stower's Institute for Medical Research in Kansas City, Missouri—studied the origins of the vertebrate hindbrain.

The hindbrain is a part of the central nervous system common to chordates—or organisms that have a nerve cord like our spinal cord. During the development of vertebrates—a subtype of chordates that have backbones—the hindbrain is compartmentalized into eight segments, each of which becomes uniquely patterned to establish networks of neuronal circuits. These segments eventually give rise to adult brain regions like the cerebellum, which is important for motor control, and the medulla oblongata, which is necessary for breathing and other involuntary functions.

However, this segmentation is not present in so-called "invertebrate chordates"—a grouping of chordates that lack a backbone, such as sea squirts and lancelets.

"The interesting thing about lampreys is that they occupy an intermediate evolutionary position between the invertebrate chordates and the jawed vertebrates," says Hugo Parker, a postdoc at Stower's Institute and first author on the study. "By investigating aspects of lamprey embryology, we can get a picture of how vertebrate traits might have evolved."

In the vertebrates, segmental patterning genes called Hox genes help to determine the animal's head-to-tail body plan—and those same Hox genes also control the segmentation of the hindbrain. Although invertebrate chordates also have Hox genes, these animals don't have segmented hindbrains. Because lampreys are centered between these two types of organisms on the evolutionary tree, the researchers wanted to know whether or not Hox genes are involved in patterning of the lamprey hindbrain.

To their surprise, the researchers discovered that the lamprey hindbrain was not only segmented during development but the process also involved Hox genes—just like in its jawed vertebrate cousins.

"When we started, we thought that the situation was different, and the Hox genes were not really integrated into the process of segmentation as they are in jawed vertebrates," Parker says. "But in actually doing this project, we discovered the way that lamprey Hox genes are expressed and regulated is very similar to what we see in jawed vertebrates." This means that hindbrain segmentation—and the role of Hox genes in this segmentation—happened earlier on in evolution than was once thought, he says.

Parker, who has been spending his summers at Caltech studying lampreys since 2008, is next hoping to pinpoint other aspects of the lamprey hindbrain that may be conserved in modern vertebrates—information that will help contribute to a fundamental understanding of vertebrate development. And although those investigations will probably mean following the lamprey for a few more summers at Caltech, Parker says his time in the lamprey facility continually offers a one-of-a-kind experience.

"The lamprey system here is unique in the world—and it's not just the water tanks and how we've learned to maintain the animals. It's the small nucleus of people who have particular skills, people who come in from all over the world to work together, share protocols, and develop the field together," he says. "That's one of the things I've liked ever since I first came here. I really felt like I was a part of something very special.

These results were published in a paper titled "A Hox regulatory network of hindbrain segmentation is conserved to the base of vertebrates." Robb Krumlauf, a scientific director at the Stower's Institute and professor at the Kansas University Medical Center, was also a coauthor on the study. The Zebrafish/Xenopus/Lamprey facility at Caltech is a Beckman Institute facility. 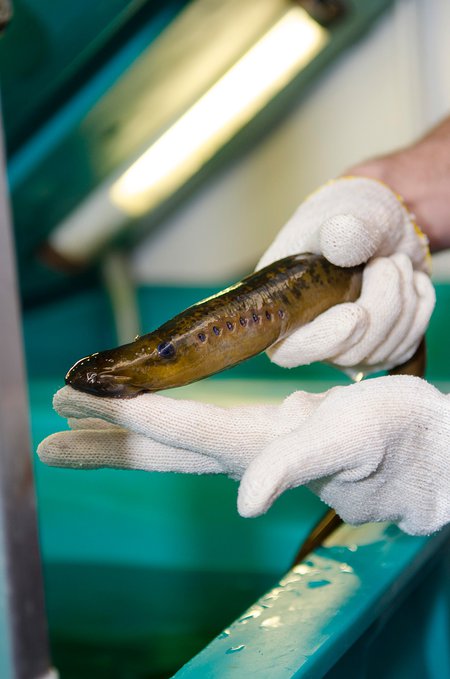 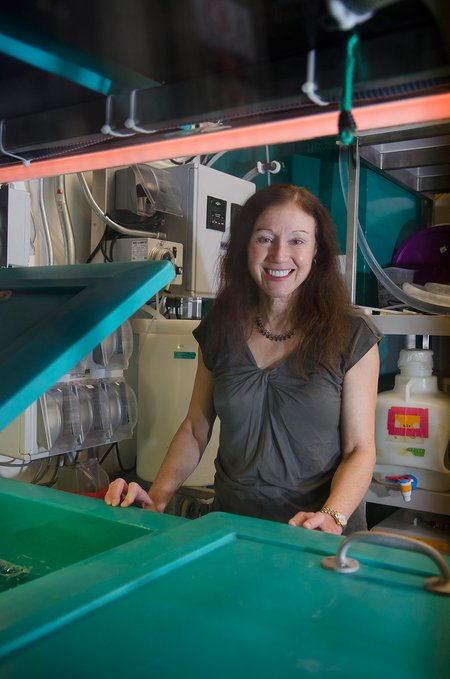 Marianne Bronner, the Albert Billings Ruddock Professor of Biology, with the tanks where the sea lamprey are kept during their time at Caltech. Credit: Lance Hayashida/Caltech Office of Strategic Communications 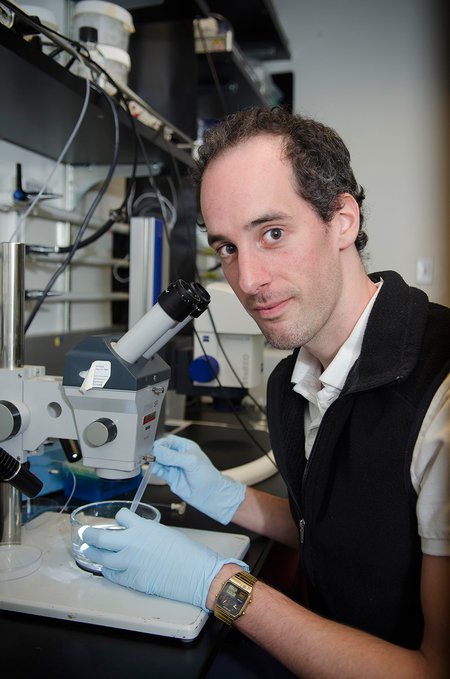 Hugo Parker, a postdoctoral scholar from the Stowers Institute for Medical Research, works with lamprey embryos at a microscope in the Caltech Zebrafish/Xenopus/Lamprey facility. Credit: Lance Hayashida/Caltech Office of Strategic Communications 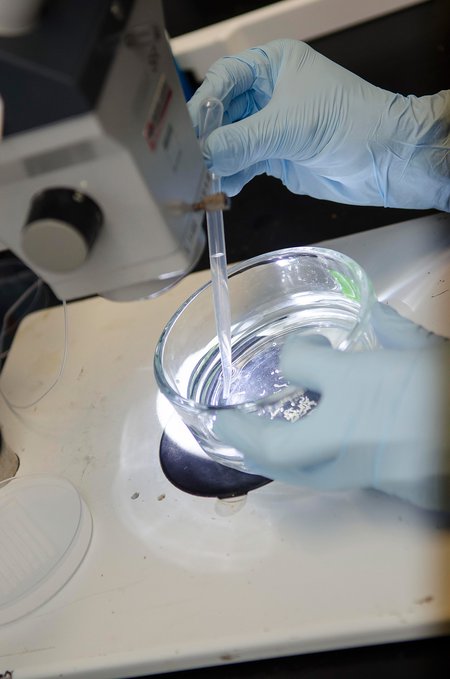 Lamprey embryos are sorted for observation at a microscope in the Caltech Zebrafish/Xenopus/Lamprey facility. Credit: Lance Hayashida/Caltech Office of Strategic Communications 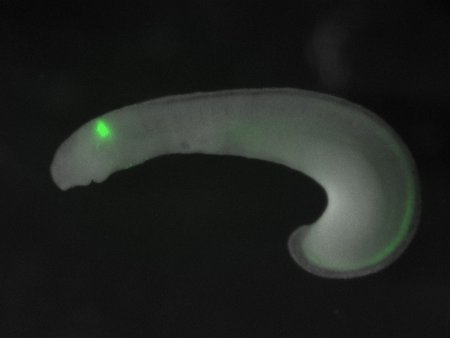 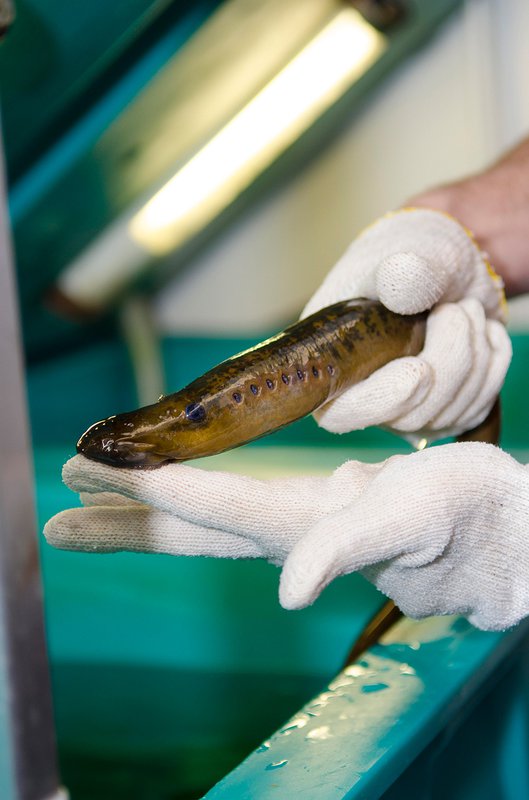 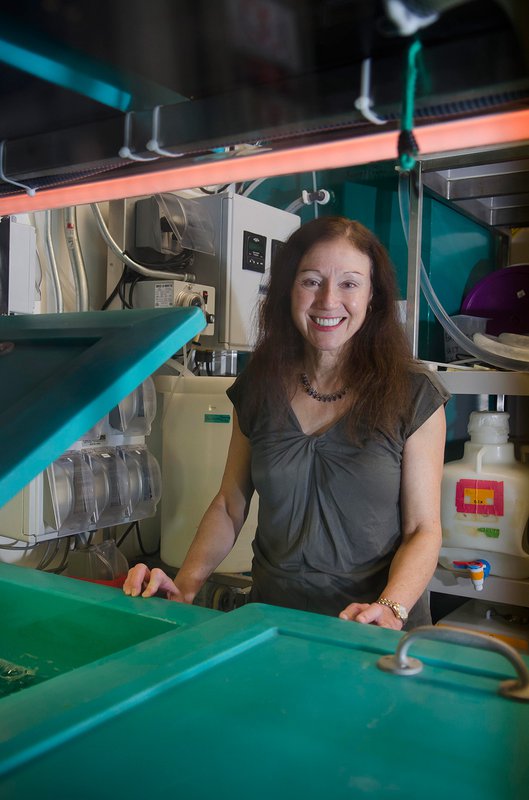 Marianne Bronner, the Albert Billings Ruddock Professor of Biology, with the tanks where the sea lamprey are kept during their time at Caltech.
Credit: Lance Hayashida/Caltech Office of Strategic Communications
Download Full Image 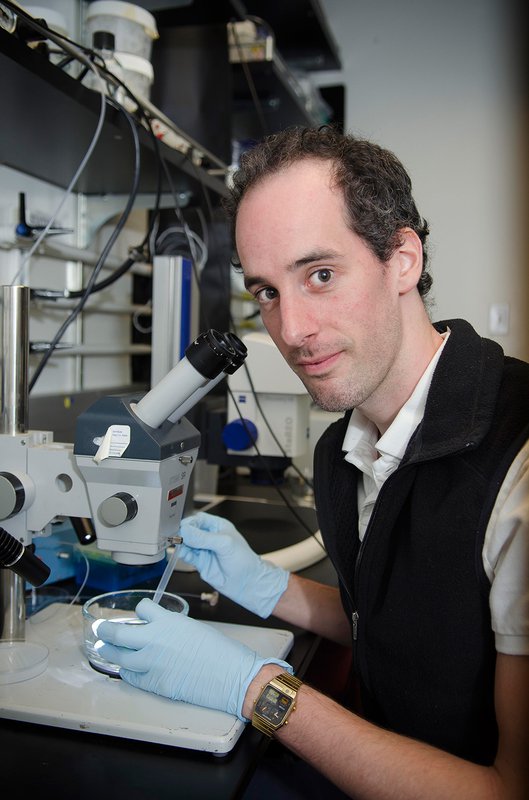 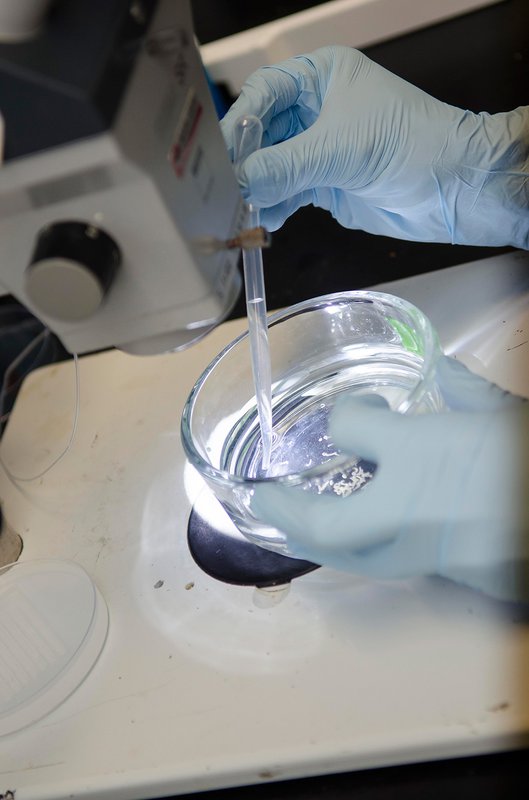 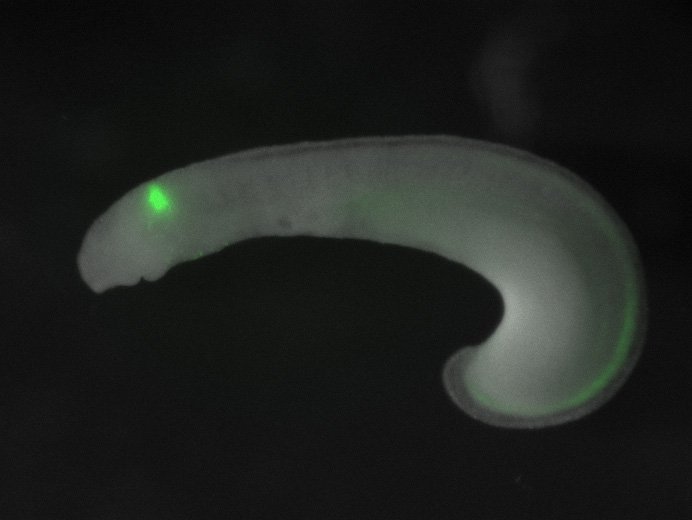