When certain massive stars use up all of their fuel and collapse onto their cores, explosions 10 to 100 times brighter than the average supernova occur. Exactly how this happens is not well understood. Astrophysicists from Caltech, UC Berkeley, the Albert Einstein Institute, and the Perimeter Institute for Theoretical Physics have used the National Science Foundation's Blue Waters supercomputer to perform three-dimensional computer simulations to fill in an important missing piece of our understanding of what drives these blasts.

The researchers report their findings online on November 30 in advance of publication in the journal Nature. The lead author on the paper is Philipp Mösta, who started the work while a postdoctoral scholar at Caltech and is now a NASA Einstein Fellow at UC Berkeley.

The extremely bright explosions come in two varieties—some are a type of energetic supernovae called hypernovae, while others are gamma-ray bursts (GRBs). Both are driven by focused jets formed in some collapsed stellar cores. In the case of GRBs, the jets themselves escape the star at close to the speed of light and emit strong beams of extremely energetic light called gamma rays. The necessary ingredients to create such jets are rapid rotation and a magnetic field that is a million billion times stronger than Earth's own magnetic field.

In the past, scientists have simulated the evolution of massive stars from their collapse to the production of these jet-driven explosions by factoring unrealistically large magnetic fields into their models—without explaining how they could be generated in the first place. But how could magnetic fields strong enough to power the explosions exist in nature?

"That's what we were trying to understand with this study," says Luke Roberts, a NASA Einstein Fellow at Caltech and a coauthor on the paper. "How can you start with the magnetic field you might expect in a massive star that is about to collapse—or at least an initial magnetic field that is much weaker than the field required to power these explosions—and build it up to the strength that you need to collimate a jet and drive a jet-driven supernova?"

For more than 20 years, theory has suggested that the magnetic field of the inner- most regions of a massive star that has collapsed, also known as a proto-neutron star, could be amplified by an instability in the flow of its plasma if the core is rapidly rotating, causing its outer edge to rotate faster than its center. However, no previous models could prove this process could strengthen a magnetic field to the extent needed to collimate a jet, largely because these simulations lacked the resolution to resolve where the flow becomes unstable.

Magnetic field amplification in hypernovae
Supercomputer visualization of the toroidal magnetic field in a collapsed, massive star, showing how in a span of 10 milliseconds the rapid differential rotation revs up the stars magnetic field to a million billion times that of our sun (yellow is positive, light blue is negative). Red and blue represent weaker positive and negative magnetic fields, respectively. Credit: Philipp Mösta

Mösta and his colleagues developed a simulation of a rapidly rotating collapsed stellar core and scaled it so that it could run on the Blue Waters supercomputer, a powerful supercomputer funded by the NSF located at the National Center for Supercomputing Applications at the University of Illinois. Blue Waters is known for its ability to provide sustained high-performance computing for problems that produce large amounts of information. The team's highest-resolution simulation took 18 days of around-the-clock computing by about 130,000 computer processors to simulate just 10 milliseconds of the core's evolution.

In the end, the researchers were able to simulate the so-called magnetorotational instability responsible for the amplification of the magnetic field. They saw—as theory predicted—that the instability creates small patches of an intense magnetic field distributed in a chaotic way throughout the core of the collapsed star.

"Surprisingly, we found that a dynamo process connects these patches to create a larger, ordered structure," explains David Radice, a Walter Burke Fellow at Caltech and a coauthor on the paper. An early type of electrical generator known as a dynamo produced a current by rotating electromagnetic coils within a magnetic field. Similarly, astrophysical dynamos generate currents when hydromagnetic fluids in stellar cores rotate under the influence of their magnetic fields. Those currents can then amplify the magnetic fields.

"We find that this process is able to create large-scale fields—the kind you would need to power jets," says Radice.

The researchers also note that the magnetic fields they created in their simulations are similar in strength to those seen in magnetars—neutron stars (a type of stellar remnant) with extremely strong magnetic fields. "It takes thousands or millions of years for a proto-neutron star to become a neutron star, and we have not yet simulated that. But if you could transport this thing thousands or millions of years forward in time, you would have a strong enough magnetic field to explain magnetar field strengths," says Roberts. "This might explain some fraction of magnetars or a particular class of very bright supernovae that are thought to be powered by a spinning magnetar at their center."

Additional authors on the paper, "A large-scale dynamo and magnetoturbulence in rapidly rotating core-collapse supernovae," are Christian Ott, professor of theoretical astrophysics; Erik Schnetter of the Perimeter Institute for Theoretical Physics, the University of Guelph, and Louisiana State University; and Roland Haas of the Max Planck Institute for Gravitational Physics in Potsdam-Golm, Germany. The work was partially supported by the Sherman Fairchild Foundation, by grants from the NSF, by NASA Einstein Fellowships, and by an award from the Natural Sciences and Engineering Research Council of Canada. 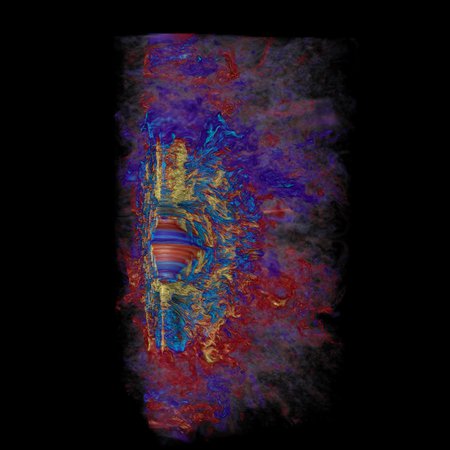 A visualization of the strong, ordered magnetic field built up by dynamo action in the core of a rapidly rotating, collapsed star. Credit: Moesta et al./Nature
Image Lightbox 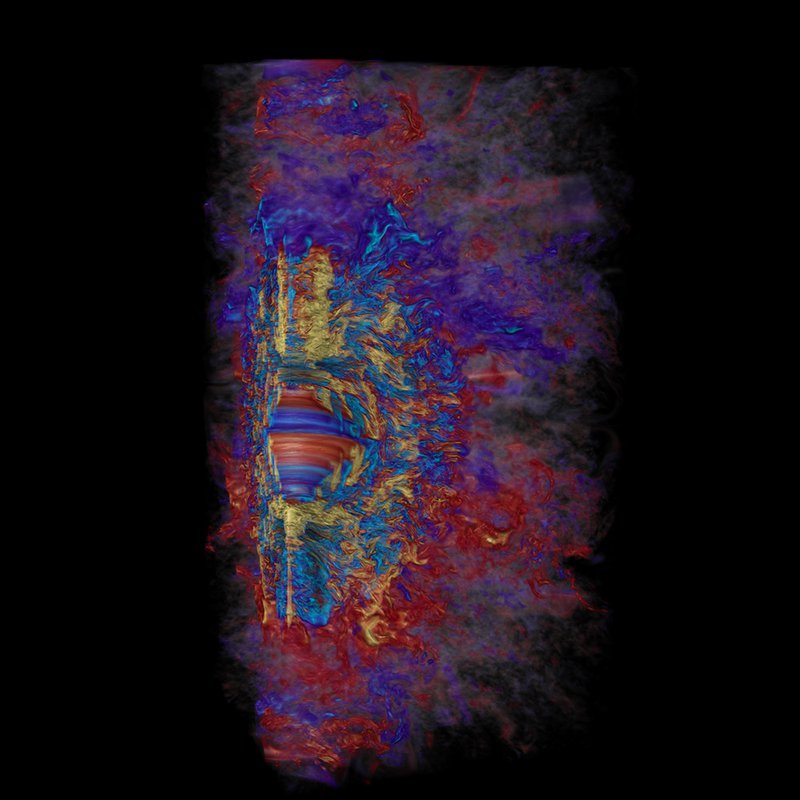 A visualization of the strong, ordered magnetic field built up by dynamo action in the core of a rapidly rotating, collapsed star.
Credit: Moesta et al./Nature
Download Full Image
Subscribe
The Caltech Weekly