For many patients diagnosed with diabetes, treating the disease can mean a burdensome and uncomfortable lifelong routine of monitoring blood sugar levels and injecting the insulin that their bodies don't naturally produce. But, as part of their Summer Undergraduate Research Fellowship (SURF) projects at Caltech, several engineering students have contributed to the development of tiny biosensors that could one day eliminate the need for these manual blood sugar tests.

Because certain patients with diabetes are unable to make their own insulin—a hormone that helps transfer glucose, or sugar, from the blood into muscle and other tissues—they need to monitor frequently their blood glucose, manually injecting insulin when sugar levels surge after a meal. Most glucose monitors require that patients prick their fingertips to collect a drop of blood, sometimes up to 10 times a day for the rest of their lives.

In their SURF projects, the students, all from Caltech's Division of Engineering and Applied Science, looked for different ways to do these same tests but painlessly and automatically. 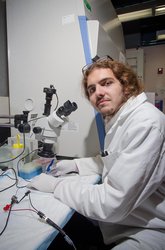 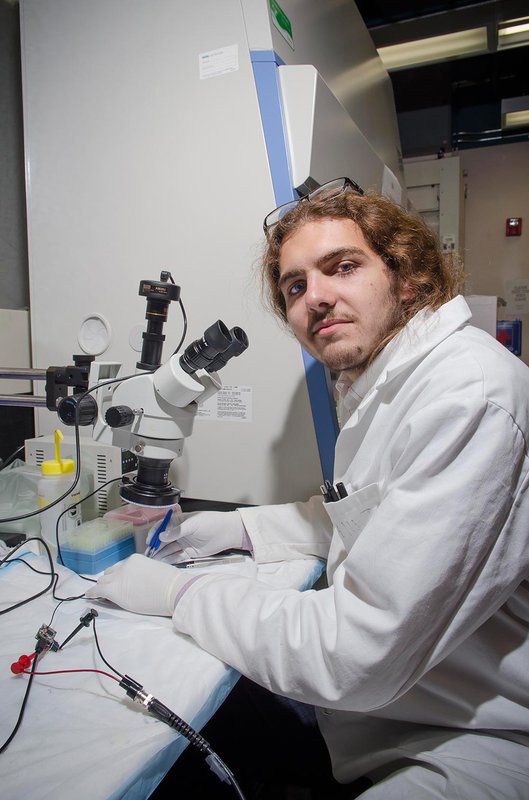 Senior applied physics major Mehmet Sencan has approached the problem with a tiny chip that can be implanted under the skin. The sensor, a square just 1.4 millimeters on each side, is designed to detect glucose levels from the interstitial fluid (fluid found in the spaces between cells) that is just under the skin. The glucose levels in this fluid directly relate to the blood glucose concentration.

Sencan has been involved in optimizing the electrochemical method that the chip will use to detect glucose levels. Much like a traditional finger-stick glucose meter, the chip uses glucose oxidase, an enzyme that reacts in the presence of glucose, to create an electrical current. Higher levels of glucose result in a stronger current, allowing the device to measure glucose levels based on the charge that passes through the fluid.

Once the glucose level is detected, the information is wirelessly transmitted via a radio wave frequency to a reader that uses the same frequency to power the device itself. Ultimately an external display will let the patient know if their levels are within range.

Sencan, who works in the laboratory of Axel Scherer, the Bernard Neches Professor of Electrical Engineering, Applied Physics, and Physics, and who is co-mentored by postdoctoral researcher Muhammad Mujeeb-U-Rahman, started this project three years ago during his very first SURF.

"When I started, we were just thinking about what kind of chemistry the sensor would use, and now we have a sensor that is actually designed to do that," he says. Over the summer, he implanted the sensors in rat models, and he will continue the study over the fall and spring terms using both rat and mouse models—a first step in determining if the design is a clinically viable option.

Junior electrical engineering major Sith Domrongkitchaiporn from the Scherer laboratory, also co-mentored by Mujeeb-U-Rahman, took a different approach to glucose detection, making tiny biosensors that are inconspicuously wearable on the surface of a contact lens. "It's an interesting concept because instead of having to do a procedure to place something under the skin, you can use a less invasive method, placing a sensor on the eye to get the same information," he says.

He used the method optimized by Mehmet to determine blood glucose levels from interstitial fluid and adapted the chemistry to measure glucose in the eyes' tears. This summer, he will be attempting to fabricate the lens itself and improve upon the process whereby radio waves are used to power the sensor and then transmit data from the sensor to an external computer. 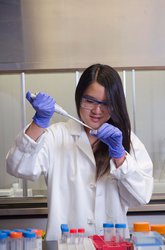 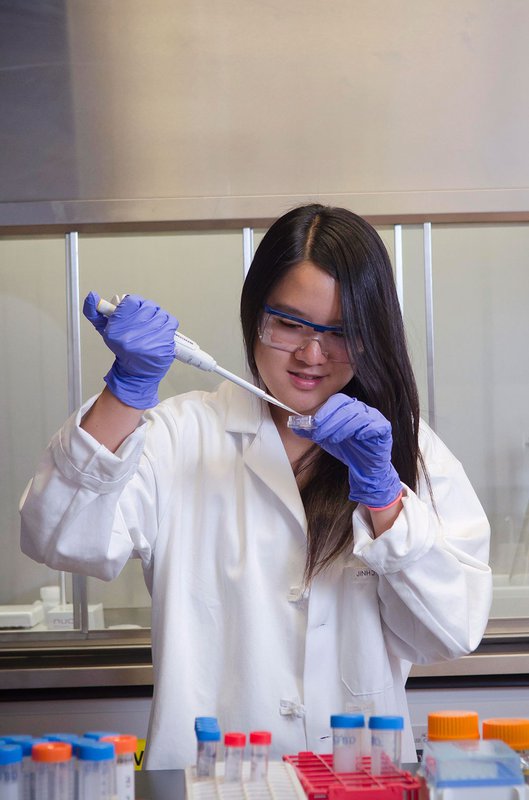 SURF student and sophomore electrical engineering major Jennifer Chih-Wen Lin wanted to incorporate a different kind of glucose sensor into a contact lens. "The concept—determining glucose readings from tears—is very similar to Sith's, but the method is very different," she says.

Instead of determining the glucose level based on the amount of electrical current that passes through a sample, Lin, who works in the laboratory of Hyuck Choo, assistant professor of electrical engineering, worked on a sensor that detects glucose levels from the interaction between light and molecules.

In her SURF project, she began optimizing the characterization of glucose molecules in a sample of glucose solution using a technique called Raman spectroscopy. When molecules encounter light, they vibrate differently based on their symmetry and the types of bonds that hold their atoms together. This vibrational information provides a unique fingerprint for each type of molecule, which is represented as peaks on the Raman spectrum—and the intensity of these peaks correlates to the concentration of that molecule within the sample.

"This step is important because once I can determine the relationship between peak intensities and glucose concentrations, our sensor can just compare that known spectrum to the reading from a sample of tears to determine the amount of glucose in the sample," she says.

Lin's project is in the very beginning stages, but if it is successful, it could provide a more accurate glucose measurement, and from a smaller volume of liquid, than is possible with the finger-stick method. Perhaps more importantly for patients, it can provide that measurement painlessly. 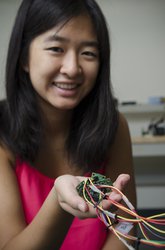 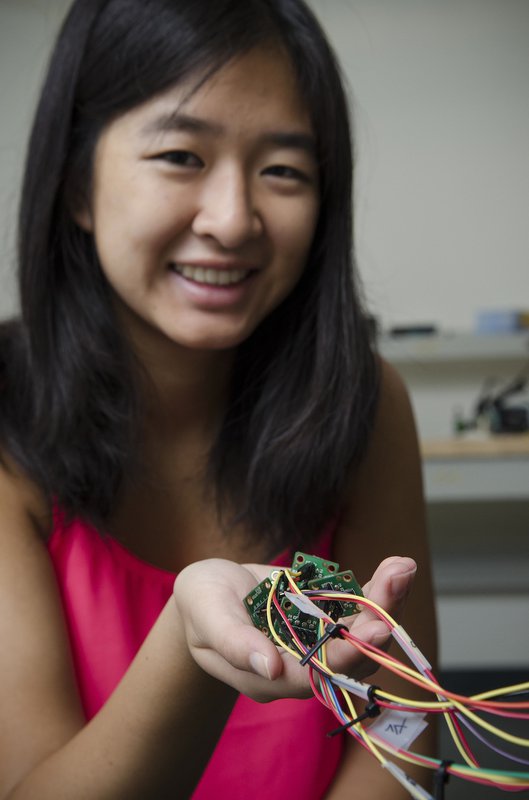 Also in Choo's laboratory, sophomore electrical engineering major Sophia Chen's SURF project involves a new way to power devices like these tiny sensors and other medical implants, using the vibrations from a patient's vocal cords. These vibrations produce the sound of our voice, and also create vibrations in the skull.

"We're using these devices called energy harvesters that can extract energy from vibrations at specific frequencies. When the vibrations go from the vocal folds to the skull, a structure in the energy harvester vibrates at the same frequency, generating energy—energy that can be used to power batteries or charge things," Chen says.

Chen's goal is to determine the frequency of these vibrations—and if the energy that they produce is actually enough to power a tiny device. The hope is that one day these vibrations could power, or at least supplement the power of, medical devices that need to be implanted near the head and that presently run on batteries with finite lifetimes.

Chen and the other students acknowledge that health-monitoring sensors powered by the human body might be years away from entering the clinic. However, this opportunity to apply classroom knowledge to a real-life challenge—such as diabetes treatment—is an important part of their training as tomorrow's scientists and engineers. 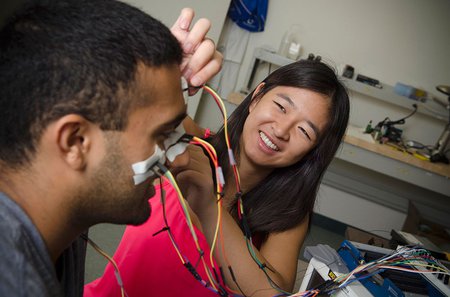 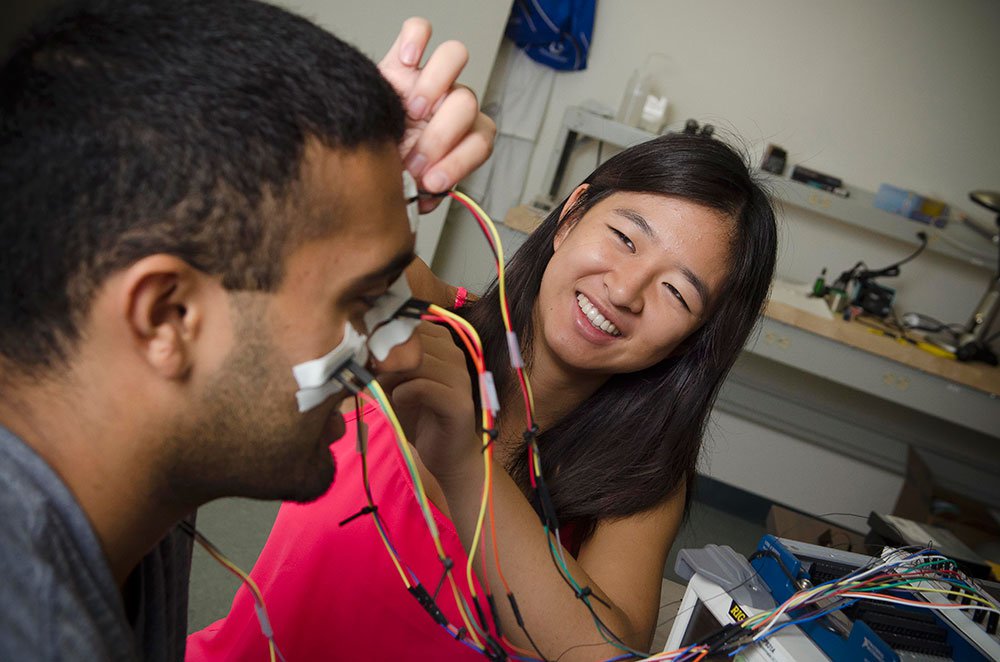