PASADENA, Calif.—Imagine if doctors could perform surgery without ever having to cut through your skin. Or if they could diagnose cancer by seeing tumors inside the body with a procedure that is as simple as an ultrasound. Thanks to a technique developed by engineers at the California Institute of Technology (Caltech), all of that may be possible in the not-so-distant future.

The new method enables researchers to focus light efficiently inside biological tissue. While the previous limit for how deep light could be focused was only about one millimeter, the Caltech team is now able to reach two and a half millimeters. And, in principle, their technique could focus light as much as a few inches into tissue. The technique is used much like a flashlight shining on the body's interior, and may eventually provide researchers and doctors with a host of possible biomedical applications, such as a less invasive way of diagnosing and treating diseases.

If you crank up the power of light, you might even be able to do away with a traditional scalpel. "It enables the possibilities of doing incision-less surgery," says Changhuei Yang, a professor of electrical engineering and bioengineering at Caltech and a senior author on the new study. "By generating a tight laser-focus spot deep in tissue, we can potentially use that as a laser scalpel that leaves the skin unharmed."

Ying Min Wang, a graduate student in electrical engineering, and Benjamin Judkewitz, a postdoctoral scholar, are the lead authors on the paper, which was published in the June 26 issue of the journal Nature Communications.

The new work builds on a previous technique that Yang and his colleagues developed to see through a layer of biological tissue, which is opaque because it scatters light. In the previous work, the researchers shined light through the tissue and then recorded the resulting scattered light on a holographic plate. The recording contained all the information about how the light beam scattered, zigzagging through the tissue. By playing the recording in reverse, the researchers were able to essentially send the light back through to the other side of the tissue, retracing its path to the original source. In this way, they could send light through a layer of tissue without the blurring effect of scattering.

But to make images of what is inside tissue—to get a picture of cells or molecules that are embedded inside, say, a muscle—the researchers would have to be able to focus a light beam into the tissue. "For biologists, it's most important to know what's happening inside the tissue," Wang says.

To focus light into tissue, the researchers expanded on the recent work of Lihong Wang's group at Washington University in St. Louis (WUSTL); they had developed a method to focus light using the high-frequency vibrations of ultrasound. The WUSTL group took advantage of two properties of ultrasound. First, the high-frequency sound waves are not scattered by tissue, which is why it is great for taking images of fetuses in utero. Second, ultrasonic vibrations interact with light in such a way that they shift the light's frequency ever so slightly. As a result of this so-called acousto-optic effect, any light that has interacted with ultrasound changes into a slightly different color.

In both the WUSTL and Caltech experiments, the teams focused ultrasound waves into a small region inside a tissue sample. They then shined light into the sample, which, in turn, scattered the light. Because of the acousto-optic effect, any of the scattered light that passes through the region with the focused ultrasound will change to a slightly different color. The researchers can pick out this color-shifted light and record it. By employing the same playback technique as in the earlier Caltech work, they then send the light back, having only the color-shifted bits retrace their path to the small region where the ultrasound was focused—which means that the light itself is focused on that area, allowing an image to be created. The researchers can control where they want to focus the light simply by moving the ultrasound focus.

The WUSTL experiment was limited, however, because only a very small amount of light could be focused. The Caltech engineers' new method, on the other hand, allows them to fire a beam of light with as much power as they want—which is essential for potential applications.

The team demonstrated how the new method could be used with fluorescence imaging—a powerful technique used in a wide range of biological and biomedical research. The researchers embedded a patch of gel with a fluorescent pattern that spelled out "CIT" inside a tissue sample. Then, they scanned the sample with focused light beams. The focused light hit and excited the fluorescent pattern, resulting in the glowing letters "CIT" emanating from inside the tissue. The team also demonstrated their technique by taking images of tumors tagged with fluorescent dyes.

"This demonstration that we can focus significant optical power deep within tissues opens up significant possibilities in optical imaging," Yang says. By tagging cells or molecules that are markers for disease with fluorescent dyes, doctors can use this technique to make diagnoses noninvasively, much as if they were doing an ultrasound procedure.

Doctors might also use this process to treat cancer with photodynamic therapy. In this procedure, a drug that contains light-sensitive, cancer-killing compounds is injected into a patient. Cancer cells absorb those compounds preferentially, so that the compounds kill the cells when light shines on them. Photodynamic therapy is now only used at tissue surfaces, because of the way light is easily scattered. The new technique should allow doctors to reach cancer cells deeper inside tissue.

The team has been able to more than double the current limit for how far light can be focused into tissue. With future improvements on the optoelectronic hardware used to record and play back light, the engineers say, they may be able to reach 10 centimeters (almost 4 inches)—the depth limit of ultrasound—within a few years.

Still, the researchers say, their demonstration shows they have overcome the main conceptual hurdle for effectively focusing light deep inside tissue. "This is a big breakthrough, and we're excited about the potential," Judkewitz says. Adds Caltech's Wang, "It's a very new way to image into tissue, which could lead to a lot of promising applications."

The Nature Communications paper is titled "Deep-tissue focal fluorescence imaging with digitally time-reversed ultrasound-encoded light." In addition to Wang, Judkewitz, and Yang, the other author on the paper is Charles DiMarzio of Northeastern University. This work was supported by the National Institutes of Health, the Defense Advanced Research Projects Agency, the Sir Henry Wellcome Postdoctoral Fellowship from the Wellcome Trust, and the National Science Scholarship from the Agency for Science, Technology, and Research in Singapore. 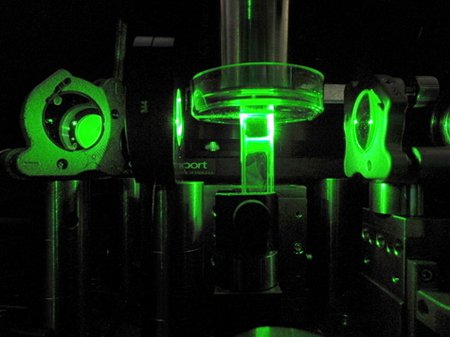 The Caltech researchers' new technique allows them to focus light deep inside biological tissue. In the experiment, the researchers shined green laser light into the tissue sample seen here in the center. Credit: Caltech/Benjamin Judkewitz and Ying Min Wang

How the technique works. Left: light enters the tissue sample and is scattered (blue arrows). From above, ultrasound is focused into a small area inside the tissue. The ultrasound shifts the frequency of any light that passed through that area ever so slightly, changing its color. The color-shifted light (green) is then recorded. Right: The recorded light is sent back to retrace its steps to the small region where the ultrasound was focusedâ€"which means the light itself is focused on that area. Credit: Caltech/Ying Min Wang and Benjamin Judkewitz
Image Gallery Lightbox 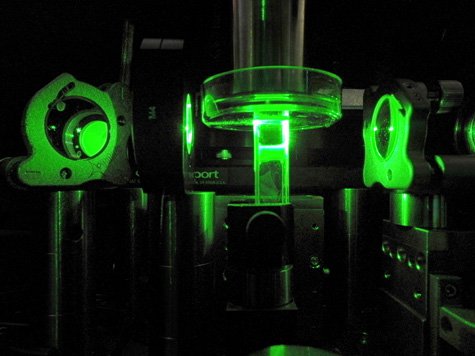 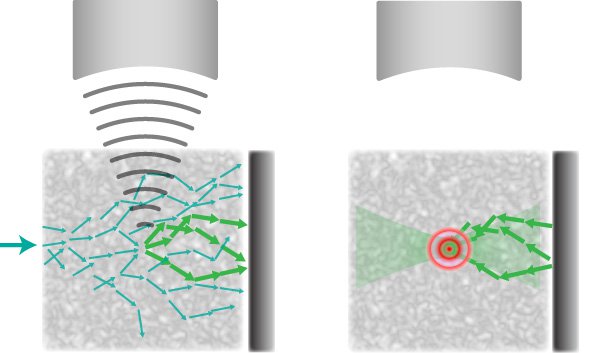 How the technique works. Left: light enters the tissue sample and is scattered (blue arrows). From above, ultrasound is focused into a small area inside the tissue. The ultrasound shifts the frequency of any light that passed through that area ever so slightly, changing its color. The color-shifted light (green) is then recorded. Right: The recorded light is sent back to retrace its steps to the small region where the ultrasound was focusedâ€"which means the light itself is focused on that area.
Credit: Caltech/Ying Min Wang and Benjamin Judkewitz
Download Full Image