Scientists Discover Unexpected Side Effect to Cleaning Up Urban Air

An imbalance between the trends in two common air pollutants is unexpectedly triggering the creation of a class of airborne organic compounds not usually found in the atmosphere over urban areas of North America, according to a new study from Caltech.

For decades, efforts to reduce air pollution have led to cleaner air in U.S cities like Los Angeles, with subsequent improvements in public health. Those efforts have targeted both nitric oxides and hydrocarbons. Nitric oxide is a compound of nitrogen and oxygen emitted from engines (especially those powered by diesel fuel) and from coal power plants. Hydrocarbons, meanwhile, are the family of molecules made from chaining together hydrogen and carbon. These molecules are emitted from many sources including gasoline-powered cars, trucks, solvents, cleaners used both at home and in industrial settings, and even trees.

One way researchers track the changing rates of nitric oxide emissions and hydrocarbon emissions is by examining the ratio of the levels of non-methane atmospheric hydrocarbons to those of nitric oxide (methane, a powerful greenhouse gas, is tracked separately). From 1987 and 1997, that ratio dropped by a factor of two.

Regulations aimed at improving air quality in urban areas like Los Angeles have made rapid progress on reducing nitric oxide and hydrocarbon emissions. As old cars have been taken off the street in favor of cleaner new cars and diesel trucks have been retrofitted or replaced, nitric oxide emissions have dropped rapidly. Compared to 1970 models, new cars and trucks produce about 99 percent fewer common pollutants, according to the Environmental Protection Agency. During the last decade, for example, the amount of nitric oxide in Los Angeles's air has dropped by half.

Air pollution regulations have also led to reductions in hydrocarbon emissions, but these decreases are slowing. Hydrocarbons come from a variety of sources, making it tougher to crack down on them. For example, these compounds are released by the two-cycle engines used in leaf blowers and lawn mowers—equipment that tends to stay in service longer than cars and is subject to fewer regulations.

The sharp drop in nitric oxide levels compared to the slower decline in hydrocarbons is important: according to a new study led by Caltech's Paul Wennberg and the University of Copenhagen's Henrik Kjaergaard, this disparity can lead to the production of chemicals called organic hydroperoxides.

Organic hydroperoxides already exist in nature. In rural areas and other regions that lack large amounts of engine exhaust—and therefore places where nitric oxide levels are exceedingly low—the molecules can form when trees off-gas volatile organic compounds that then interact with sunlight.

The team led by Wennberg found, however, that there is another chemical pathway for forming organic hydroperoxides—one that occurs at nitric oxide levels substantially higher than can be found in the atmosphere over unpopulated regions. "This is chemistry that does not exist in any of the models of how nitric oxide and hydrocarbons interact," says Wennberg, Caltech's R. Stanton Avery Professor of Atmospheric Chemistry and Environmental Science and Engineering and director of the Ronald and Maxine Linde Center for Global Environmental Science.

Significantly, the atmospheric nitric oxide concentrations over Los Angeles and in urban regions across the country are now dropping to the levels at which this process—called gas-phase autoxidation—occurs.

Gas-phase autoxidation takes place when there are not enough nitric oxide molecules for hydrocarbons to react with. As a result, hydrocarbon molecules react with themselves. Gas-phase autoxidation has been observed in other settings—for example, the process can form skin-irritating organic hydroperoxides in certain cosmetic products that have gone bad and causes butter to go rancid and wine to spoil. But researchers had thought that it could not occur in the atmosphere, given current urban nitric oxide concentrations. Wennberg and colleagues have found otherwise.

"As these nitric oxide concentrations go down by another factor of two over the next five to seven years, we're going to start making more and more organic hydroperoxides in urban areas," Wennberg says. In the air, these hydroperoxides are known to form particulates—aerosols. "The problem is that we haven't seen large concentrations of hydroperoxides in heavily populated areas, so we don't know how the formation of gas and aerosol hydroperoxides will impact public health. But we do know that breathing in particles tends to be bad for you," he says.

Wennberg and Kjaergaard's findings will be published online by the Proceedings of the National Academy of Sciences during the week of December 18. The study is titled "Atmospheric autoxidation is increasingly important in urban and suburban North America." Wennberg's co-authors from Caltech include Brian M. Stoltz, professor of chemistry; graduate student Eric Praske; postdoctoral scholar J. Caleb Hethcox; and staff scientist John D. Crounse (PhD '11). Other authors of the paper include Rasmus V. Otkjær of the University of Copenhagen. This research was funded by the National Science Foundation and the University of Copenhagen. 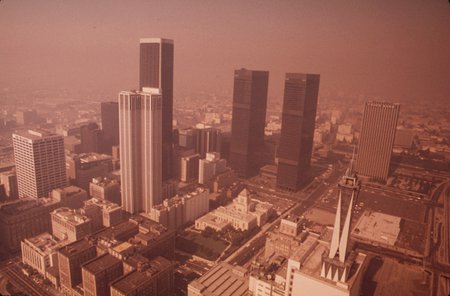 A smoggy day in Los Angeles in 1973. Decades of efforts to reduce air pollution have led to cleaner air in Los Angeles and other U.S. cities. Credit: Public Domain
Image Lightbox 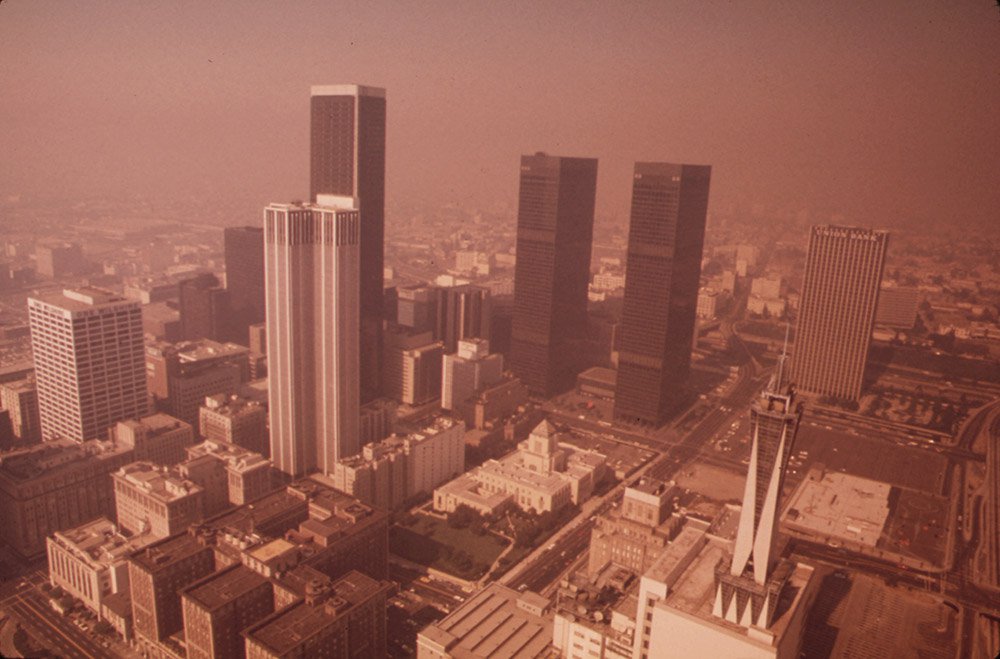 A smoggy day in Los Angeles in 1973. Decades of efforts to reduce air pollution have led to cleaner air in Los Angeles and other U.S. cities.
Credit: Public Domain
Download Full Image
Subscribe
The Caltech Weekly