A new type of vaccine provides protection against a variety of SARS-like betacoronaviruses, including SARS-CoV-2 variants, in mice and monkeys, according to a study led by researchers in the laboratory of Caltech's Pamela Bjorkman, the David Baltimore Professor of Biology and Bioengineering.

Betacoronaviruses, including those that caused the SARS, MERS, and COVID-19 pandemics, are a subset of coronaviruses that infect humans and animals. The vaccine works by presenting the immune system with pieces of the spike proteins from SARS-CoV-2 and seven other SARS-like betacoronaviruses, attached to a protein nanoparticle structure, to induce the production of a broad spectrum of cross-reactive antibodies. Notably, when vaccinated with this so-called mosaic nanoparticle, animal models were protected from an additional coronavirus, SARS-CoV, that was not one of the eight represented on the nanoparticle vaccine.

"Animals vaccinated with the mosaic-8 nanoparticles elicited antibodies that recognized virtually every SARS-like betacoronavirus strain we evaluated," says Caltech postdoctoral scholar Alexander Cohen (PhD '21), co-first author on the new study. "Some of these viruses could be related to the strain that causes the next SARS-like betacoronavirus outbreak, so what we really want would be something that targets this entre group of viruses. We believe we have that."

The research appears in a paper in the journal Science on July 5.

"SARS-CoV-2 has proven itself capable of making new variants that could prolong the global COVID-19 pandemic," says Bjorkman, who is also a Merkin Institute Professor and executive officer for Biology and Biological Engineering. "In addition, the fact that three betacoronaviruses—SARS-CoV, MERS-CoV, and SARS-CoV-2—have spilled over into humans from animal hosts in the last 20 years illustrates the need for making broadly protective vaccines."

Such broad protection is needed, Bjorkman says, "because we can't predict which virus or viruses among the vast numbers in animals will evolve in the future to infect humans to cause another epidemic or pandemic. What we're trying to do is make an all-in-one vaccine protective against SARS-like betacoronaviruses regardless of which animal viruses might evolve to allow human infection and spread. This sort of vaccine would also protect against current and future SARS-CoV-2 variants without the need for updating."

How it works: A vaccine composed of spike domains from eight different SARS-like coronaviruses

The vaccine technology to attach pieces of a virus to protein nanoparticles was developed initially by collaborators at the University of Oxford. The basis of the technology is a tiny cage-like structure (a "nanoparticle") made up of proteins engineered to have "sticky" appendages on its surface, upon which researchers can attach tagged viral proteins. These nanoparticles can be prepared to display pieces of one virus only ("homotypic" nanoparticles) or pieces of several different viruses ("mosaic" nanoparticles). When injected into an animal, the nanoparticle vaccine presents these viral fragments to the immune system. This induces the production of antibodies, immune system proteins that recognize and fight off specific pathogens, as well as cellular immune responses involving T lymphocytes and innate immune cells.

In this study, the researchers chose eight different SARS-like betacoronaviruses—including SARS-CoV-2, the virus that has caused the COVID-19 pandemic, along with seven related animal viruses that could have potential to start a pandemic in humans—and attached fragments from those eight viruses onto the nanoparticle scaffold. The team chose specific fragments of the viral structures, called receptor-binding domains (RBDs), that are critical for coronaviruses to enter human cells. In fact, human antibodies that neutralize coronaviruses primarily target the virus's RBDs.

The idea is that such a vaccine could induce the body to produce antibodies that broadly recognize SARS-like betacoronaviruses to fight off variants in addition to those presented on the nanoparticle by targeting common characteristics of viral RBDs. This design comes from the idea that the diversity and physical arrangement of RBDs on the nanoparticle will focus the immune response toward parts of the RBD that are shared by the entire SARS family of coronaviruses, thus achieving immunity to all. The data reported in Science today demonstrates the potential efficacy of this approach. 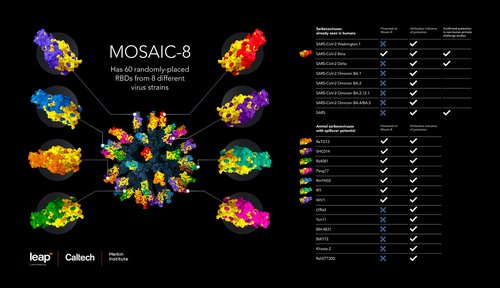 This infographic illustrates the new vaccine, composed of RBDs from eight different viruses. The table shows the broad spectrum of SARS-CoV-2 variants and related coronaviruses that the vaccine induces protection against. Credit: Courtesy of Wellcome Leap, Caltech, and Merkin Institute
Image Lightbox 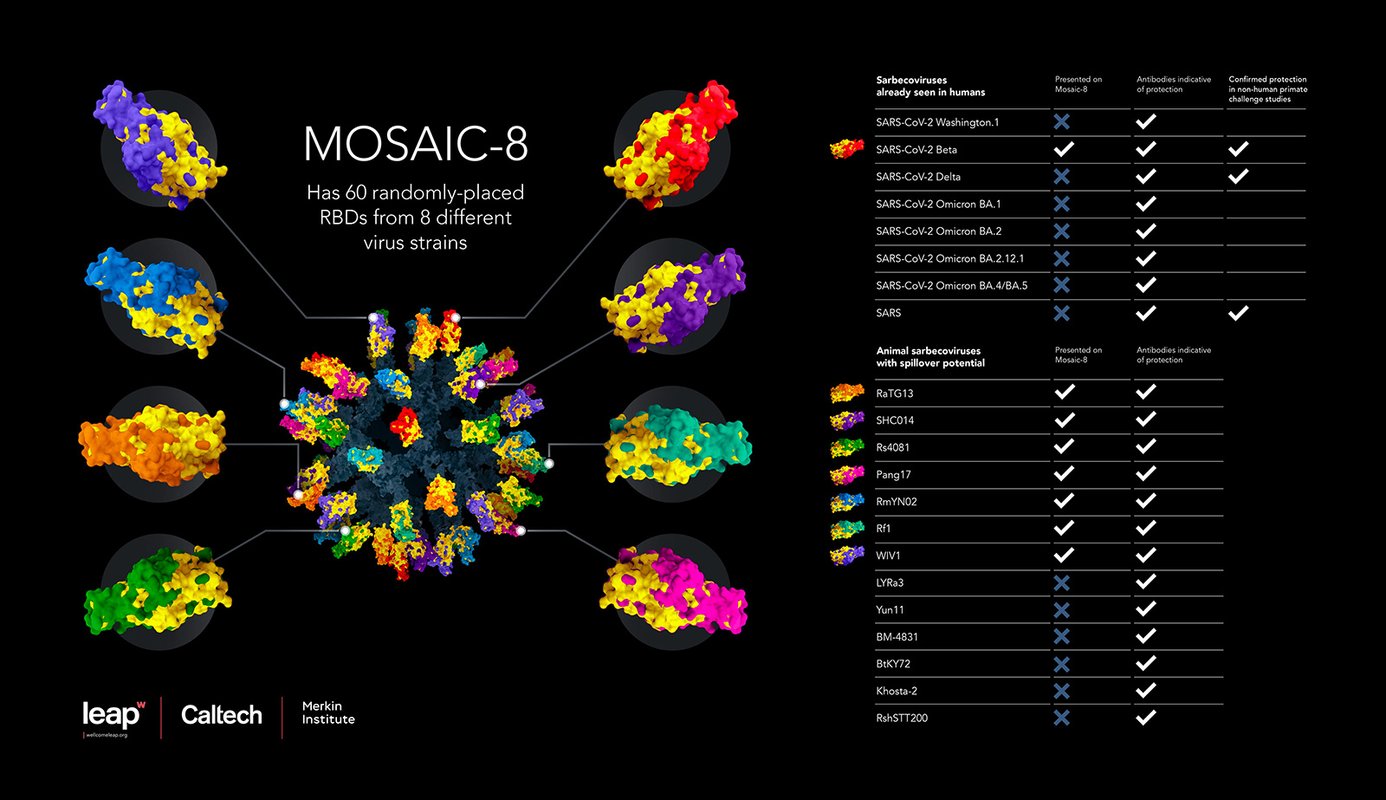 This infographic illustrates the new vaccine, composed of RBDs from eight different viruses. The table shows the broad spectrum of SARS-CoV-2 variants and related coronaviruses that the vaccine induces protection against.
Credit: Courtesy of Wellcome Leap, Caltech, and Merkin Institute
Download Full Image

Designing experiments to measure the vaccine's protection in mice

The resulting vaccine (here dubbed mosaic-8) is composed of RBDs from eight coronaviruses. Previous experiments led by the Bjorkman lab showed that mosaic-8 induces mice to produce antibodies that react to a variety of coronaviruses in a lab dish (Cohen et al., 2021, Science). Led by Cohen, the new study aimed to build from this research to see if vaccination with the mosaic-8 vaccine could induce protective antibodies in a living animal upon challenge (in other words, infection) with SARS-CoV-2 or SARS-CoV.

The team conducted three sets of experiments in mice. In one, the control, they inoculated mice with just the bare nanoparticle cage structure without any virus fragments attached. A second group of mice were injected with a homotypic nanoparticle covered only in SARS-CoV-2 RBDs, and a third group was injected with mosaic-8 nanoparticles. One experimental goal was to see if inoculation with mosaic-8 would protect the animals against SARS-CoV-2 to the same degree as the homotypic SARS-CoV-2­-immunized animals; a second goal was to evaluate protection from a so-called "mismatched virus"—one that was not represented by an RBD on the mosaic-8 nanoparticle.

Notably, the eight strains of coronavirus covering the mosaic nanoparticle intentionally did not include SARS-CoV, the virus that caused the original SARS pandemic in the early 2000s. Thus, the team aimed to also investigate the degree of protection against a challenge with the original SARS-CoV virus, using it to represent an unknown SARS-like betacoronavirus that could spill over into humans.

The mice used in the experiments were genetically engineered to express the human ACE2 receptor, which is the receptor on human cells that is used by SARS-CoV-2 and related viruses to gain entry into cells during infection. In this animal challenge model, unvaccinated mice die if infected with a SARS-like betacoronavirus, thus providing a stringent test to evaluate the potential for protection from infection and disease in humans.

However, all of the mice inoculated with mosaic-8 nanoparticles survived both the SARS-CoV-2 and SARS-CoV challenges with no weight loss or other significant pathologies.

The team then performed similar challenge experiments in nonhuman primates, this time using the most promising vaccine candidate, mosaic-8, and comparing the effects of mosaic-8 vaccination versus no vaccination in animal challenge studies. When inoculated with mosaic-8, the animals showed little to no detectable infection when exposed to SARS-CoV-2 or SARS-CoV, again demonstrating the potential for the mosaic-8 vaccine candidate to be protective for current and future variants of the virus causing the COVID-19 pandemic as well as against potential future viral spillovers of SARS-like betacoronaviruses from animal hosts.

Importantly, in collaboration with virologist Jesse Bloom (PhD '07) of the Fred Hutchinson Cancer Research Center, the team found that antibodies elicited by mosaic-8 targeted the most common elements of the RBDs across a diverse set of other SARS-like betacoronaviruses—the so-called "conserved" part of the RBD—thus providing evidence for the hypothesized mechanism by which the vaccine would be effective against new variants of SARS-CoV-2 or animal SARS-like betacoronaviruses. By contrast, homotypic SARS-CoV-2 nanoparticle injections elicited antibodies against mainly strain-specific RBD regions, suggesting these types of vaccines would likely protect against SARS-CoV-2 but not against newly arising variants or potential emerging animal viruses.

As a next step, Bjorkman and colleagues will evaluate mosaic-8 nanoparticle immunizations in humans in a Phase 1 clinical trial supported by the Coalition for Epidemic Preparedness Initiative (CEPI). To prepare for the clinical trial, which will largely enroll people who have been vaccinated and/or previously infected with SARS-CoV-2, the Bjorkman lab is planning preclinical animal model experiments to compare immune responses in animals previously vaccinated with a current COVID-19 vaccine to responses in animals that are immunologically naïve with respect to SARS-CoV-2 infection or vaccination.

"We have talked about the need for diversity in vaccine development since the very beginning of the pandemic," says Dr. Richard J. Hatchett, CEO of CEPI. "The breakthrough exhibited in the Bjorkman lab study demonstrates huge potential for a strategy that pursues a new vaccine platform altogether, potentially overcoming hurdles created by new variants. I am delighted to announce that CEPI will be supporting this novel approach to pandemic prevention in Phase I clinical trials. The accelerated speed the study achieved after receiving Wellcome Leap funding facilitated our relationship with them today. The non-human primate data is extremely encouraging and we're excited to support the next phase of trials."

Wellcome Leap provided critical funding at a crucial time to accelerate the development of the Caltech technology, shortening the timeline to reach Phase 1 clinical trials by more than 18 months. Regina E. Dugan (PhD '93), CEO of Wellcome Leap, says, "This early transition success demonstrates the value of global partnerships working collaboratively and with the urgency needed to address future pandemic risks."

The paper is titled "Mosaic RBD nanoparticles protect against challenge by diverse sarbecoviruses in animal models." Neeltje van Doremalen of the National Institute of Allergy and Infectious Diseases (National Institutes of Health) Rocky Mountain Laboratories is a co-first author along with Cohen.

Other co-authors are Allison Greaney, Tyler Starr, and Jesse Bloom of the Fred Hutchinson Cancer Research Center; Hanne Andersen, Ankur Sharma, and Mark Lewis of BIOQUAL; Jonathan Schulz, Greg Saturday, and Vincent Munster of the Rocky Mountain National Laboratories; and Tiong Tan and Alain Townsend of the University of Oxford.

This preclinical vaccine validation study was funded by Wellcome Leap, and built directly on initial development and proof-of-principle studies funded early in the pandemic by Caltech's Merkin Institute for Translational Medicine. Other ongoing coronavirus work in the Bjorkman group is supported by the Bill and Melinda Gates Foundation and George Mason Fast Grants. 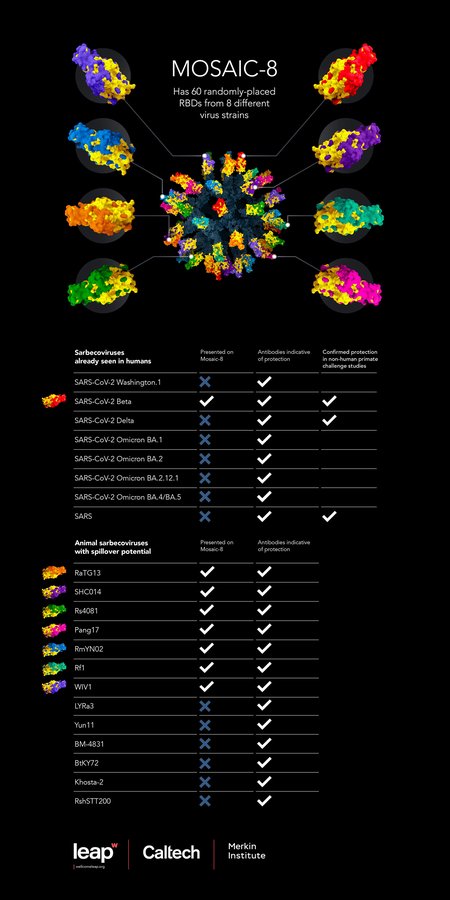 This infographic illustrates the new vaccine, composed of RBDs from eight different viruses. The table shows the broad spectrum of SARS-CoV-2 variants and related coronaviruses that the vaccine induces protection against. Credit: Courtesy of Wellcome Leap, Caltech, and Merkin Institute 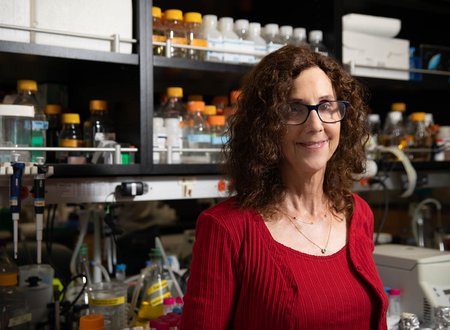 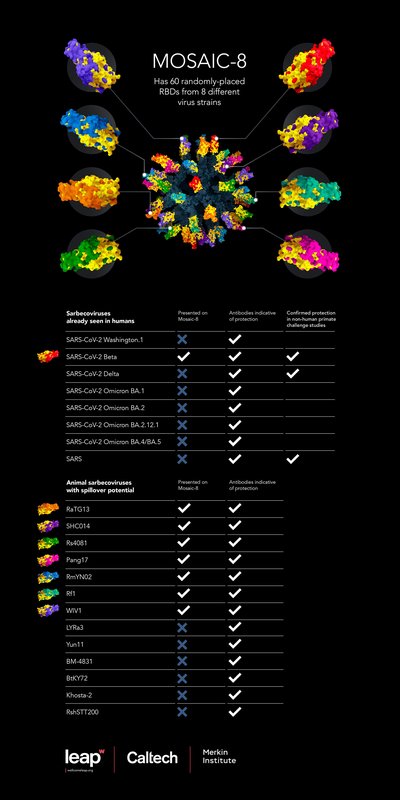