Methane-breathing microbes that inhabit rocky mounds on the seafloor could be preventing large volumes of the potent greenhouse gas from entering the oceans and reaching the atmosphere, according to a new study by Caltech researchers.

The rock-dwelling microbes, which are detailed in the Oct. 14 issue of Nature Communications, represent a previously unrecognized biological sink for methane and as a result could reshape scientists' understanding of where this greenhouse gas is being consumed in subseafloor habitats, says Professor of Geobiology Victoria Orphan, who led the study.

"Methane is a much more powerful greenhouse gas than carbon dioxide, so tracing its flow through the environment is really a priority for climate models and for understanding the carbon cycle," Orphan says.

Orphan's team has been studying methane-breathing marine microorganisms for nearly 20 years. The microbes they focus on survive without oxygen, relying instead on sulfate ions present in seawater for their energy needs. Previous work by Orphan's team helped show that the methane-breathing system is actually made up of two different kinds of microorganisms that work closely with one another. One of the partners, dubbed "ANME" for "ANaerobic MEthanotrophs," belongs to a type of ancient single-celled creatures called the archaea.

Through a mechanism that is still unclear, ANME work closely with bacteria to consume methane using sulfate from seawater. "Without this biological process, much of that methane would enter the water column, and the escape rates into the atmosphere would probably be quite a bit higher," says study first author Jeffrey Marlow, a geobiology graduate student in Orphan's lab.

Until now, however, the activity of ANME and their bacterial partners had been primarily studied in sediments located in cold seeps, areas on the ocean bottom where methane is escaping from subseafloor sources into the water above. The new study marks the first time they have been observed to oxidize methane inside carbonate mounds, huge rocky outcroppings of calcium carbonate that can rise hundreds of feet above the seafloor.

If the microbes are living inside the mounds themselves, then the distribution of methane consumption is significantly different from what was previously thought. "Methane-derived carbonates represent a large volume within many seep systems, and finding active methane-consuming archaea and bacteria in the interior of these carbonate rocks extends the known habitat for methane-consuming microorganisms beyond the relatively thin layer of sediment that may overlay a carbonate mound," Marlow says.

Orphan and her team detected evidence of methane-breathing microbes in carbonate rocks collected from three cold seeps around the world: one at a tectonic plate boundary near Costa Rica; another in the Eel River basin off the coast of northwestern California; and at Hydrate Ridge, off the Oregon coast. The team used manned and robotic submersibles to collect the rock samples from depths ranging from 2,000 feet to nearly half a mile below the surface.

Marlow has vivid memories of being a passenger in the submersible Alvin during one of those rock-retrieval missions. "As you sink down, the water outside your window goes from bright blue surface water to darker turquoise and navy blue and all these shades of blue that you didn't know existed until it gets completely dark," Marlow recalls. "And then you start seeing flashes of light because the vehicle is perturbing the water column and exciting florescent organisms. When you finally get to the seafloor, Alvin's exterior lights turn on, and this crazy alien world is illuminated in front of you."

The carbonate mounds that the subs visited often serve as foundations for coral and sponges, and are home to rockfishes, clams, crabs, and other aquatic life. For their study, the team members gathered rock samples not only from carbonate mounds located within active cold seeps, where methane could be seen escaping from the seafloor into the water, but also from mounds that appeared to be dormant.

Once the carbonate rocks were collected, they were transported back to the surface and rushed into a cold room aboard a research ship. In the cold room, which was maintained at the temperature of the deep sea, the team cracked open the carbonates in order to gather material from their interiors. "We wanted to make sure we weren't just sampling material from the surface of the rocks," Marlow says.

Using a microscope, the team confirmed that ANME and sulfate-reducing bacterial cells were indeed present inside the carbonate rocks, and genetic analysis of their DNA showed that they were related to methanotrophs that had previously been characterized in seafloor sediment. The scientists also used a technique that involved radiolabeled 14C-methane tracer gas to quantify the rates of methane consumption in the carbonate rocks and sediments from both the actively seeping sites and the areas appearing to be inactive. They found that the rock-dwelling methanotrophs consumed methane at a slower rate than their sediment-dwelling cousins.

"The carbonate-based microbes breathed methane at roughly one-third the rate of those gathered from sediments near active seep sites," Marlow says. "However, because there are likely many more microbes living in carbonate mounds than in sediments, their contributions to methane removal from the environment may be more significant."

The rock samples that were harvested near supposedly dormant cold seeps also harbored microbial communities capable of consuming methane. "We were surprised to find that these marine microorganisms are still viable and, if exposed to methane, can continue to oxidize this greenhouse gas long after surface expressions of seepage have vanished." Orphan says.

Along with Orphan and Marlow, additional coauthors on the paper, "Carbonate-hosted methanotrophy represents an unrecognized methane sink in the deep sea," include former Caltech associate research scientist Joshua Steele, now at the Southern California Coastal Water Research Project; Wiebke Ziebis, an associate professor at the University of Southern California; Andrew Thurber, an assistant professor at Oregon State University; and Lisa Levin, a professor at the Scripps Institution of Oceanography. Funding for the study was provided by the National Science Foundation; NASA's Astrobiology Institute; the Gordon and Betty Moore Foundation Marine Microbiology Initiative grant; and the National Research Council of the National Academies.

Written by Ker Than 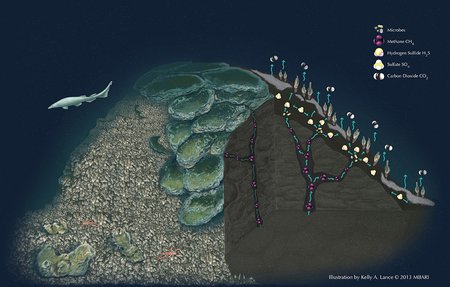 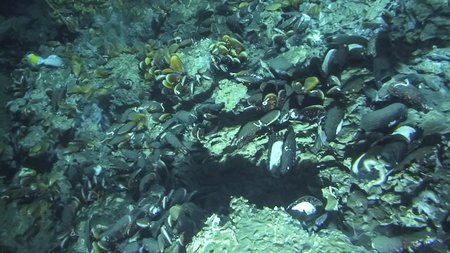 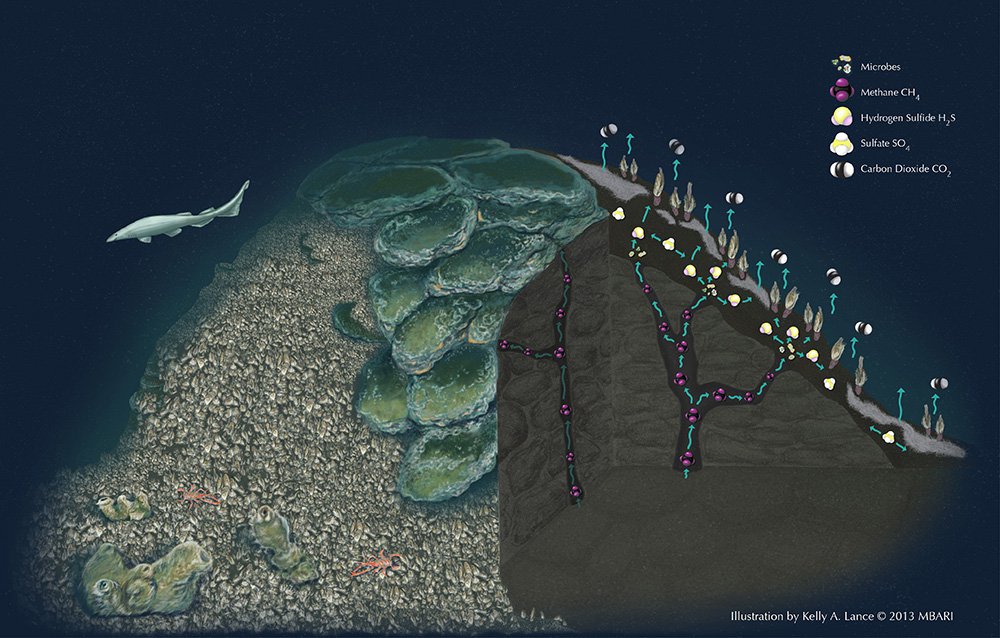 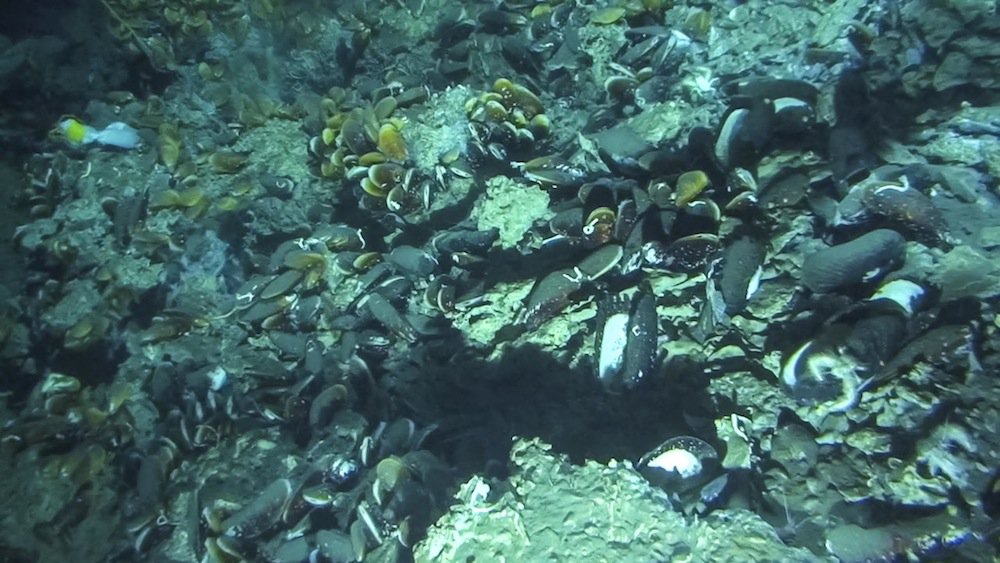 A view of Mound 12, which is approximately 1,000 meters deep, off the coast of Costa Rica. This is an active methane seep with sulfide-oxidizing chemosynthetic mussels colonizing authigenic carbonates exposed at the seabed.
Credit: V. Orphan
Download Full Image