Robots Duke It Out in "Tank Wars"

At Caltech's annual engineering design competition on March 8, fleets of robot tanks built by undergraduate students climbed hills, captured bases, and shot each other with foam balls in an epic series of battles on Beckman Mall.

The event was the final exam for Mechanical Engineering (ME) 72, the Engineering Design Laboratory course in the Division of Engineering and Applied Science.

Each year, students in the two-term class are asked to design machines that meet particular criteria and then square off in a competition at the end of the second term. This year, the theme was "tank wars." It featured six teams of four students, each fielding three tanks per team, facing off in head-to-head battles as they played a "king of the hill"- style game that involved capturing and controlling bases while shooting at one another with foam balls. The performance of the tanks counts toward part (but not all) of the grades that students receive in the class.

At this year's ME 72 competition, the 33rd annual event, students, staff, faculty, and students from local elementary schools cheered on the competitors. Aaron Ames, Bren Professor of Mechanical and Civil Engineering and Control and Dynamical Systems, also made an appearance accompanied by Cassie, his lab's bipedal robot, which walked around and met attendees.

The competing students—currently juniors—had begun designing and planning their robots in September. However, Mike Mello (PhD '12), who teaches ME 72, says that the real preparations began when the students were taking the prerequisite class, ME 14.

"We decided to really beef up the preparation that the students got in ME 14," says Mello, lecturer and research scientist in mechanical and civil engineering. "That meant a lot more electronics, mechanical reliability, how to design for mechanical stress, and we even threw in some aspects of teambuilding and teamwork."

Mechanically, the students' designs varied: some of the teams chose more tank-like track-wheel designs, while others chose more car-like four-wheel designs. Some chose independent suspensions, others fixed, and some had flywheel-based long-range cannons, while others used a trebuchet design that dumped ammo onto competitors who got too close. Each team was given $1,500 to spend on parts.

Meanwhile, the class's four teaching assistants (TAs)—all undergraduates who previously had taken the course—designed the playing field. It included three bases that the teams would be tasked with capturing: one atop a hill that could be accessed only via two steep ramps, a center base surrounded by cardboard speedbump-like obstacles, and a seesaw that required agility and control to ascend. At the center base and on the hill, the TAs built goals with two colored buttons—one for each team on the field to push to officially claim the base. The seesaw, meanwhile, was counted as occupied as long as a team's tank remained on it.

In addition, though each team started with five Nerf balls per tank, they had the option to pick up more at one of four refilling hoppers that surrounded the obstacle field. The TAs designed the refill stations to include ultrasonic sensors that detected when a robot drove underneath, releasing a load of Nerf balls into the tank's waiting hopper. When a tank was struck by a Nerf ball from an opponent's tank, it was plucked from battle and had to return to the start.

Two teams took the field at a time. The event consisted of a round-robin of five rounds, then sudden-death elimination playoffs leading to the final round. The top two teams from the round-robin earned a bye during the quarterfinal round of the playoffs, advancing directly to the semifinals. The competition included autonomous as well as radio-controlled elements. For the first 40 seconds of each five-minute round, the teams had the option to send their robots forward autonomously—either driving in a straight line for a fixed amount of time, or using cameras to hone in on the lavender paint of the three bases. Though not every team took advantage of these 40 seconds, those that did got a head start on reaching the bases.

In between rounds, teams hustled their robots onto workbenches shaded by tents for quick repairs.

After 20 rounds of battle, the Riveters—Mohar Chatterjee, Caroline Paules, Diandra Almasco, and Hannah Chen, who dubbed their team in honor of Rosie the Riveter—emerged victorious, having never lost a single match. They utilized a track-wheeled tank design topped by flywheel-based cannons, and relied on a consistent and effective strategy of capturing two key bases quickly and holding onto them for the remainder of the match. Even at the end of the competition, after having fought through seven grueling rounds, the Riveters' designs held up so well that they never had a tank fail during battle. Though the Riveters were the only all-female team, women actually outnumbered men in this year's ME 72 course for the first time in its 33-year history.

Chatterjee, who is double majoring in business, economics, and management and mechanical engineering, attributes the team's success to teamwork, a strict timeline, and a strong work ethic.

"We actually had to scrap our initial design, and we started from scratch this term because our original design wasn't working too well," she says. "There have been so many long hours—but we put in our long hours at the beginning of the term so that we could focus on testing at the end."

Chatterjee says that she and her teammates were willing to test wild ideas that led to some helpful advances—for example, using a quick-release cover held in place by rubber bands that let them keep the robot's motor turned off until the last possible moment before a match, conserving battery power.

The skills they used in the course—designing, facing limited resources and tough timelines, and working together as a group—will serve the students well regardless of whether they go into robotics or any other field, Mello says. He described a recent lunch with a former ME 72 student who has since gone on to work at Microsoft. "He told me that, hands down, the ME 72 experience was a simulation for what he experiences in the working world. And he's not the first to tell me that," Mello says. "I like to balance their theory with the practical experience they need, so that when they get to industry, they aren't deer in the headlights. They've already gone through something that's pretty grueling. And this situation is universal. It doesn't matter what widget you're building, the grind of having a concept, boundaries and design rules, design reviews ... having to shake it out, find out what makes it break, and then shore it up, that's universal."

For a play-by-play of the action, see the associated story. 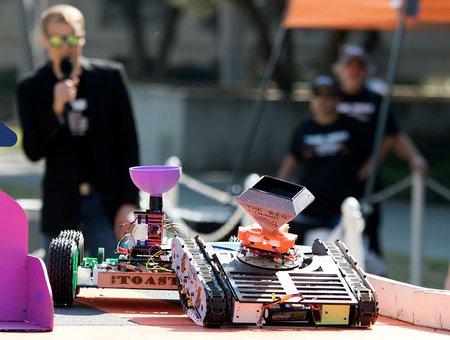 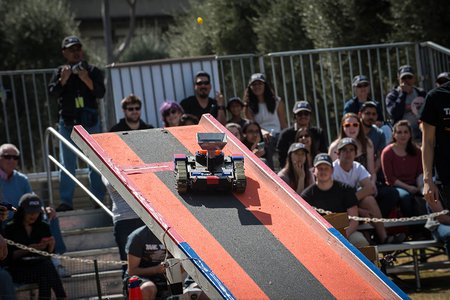 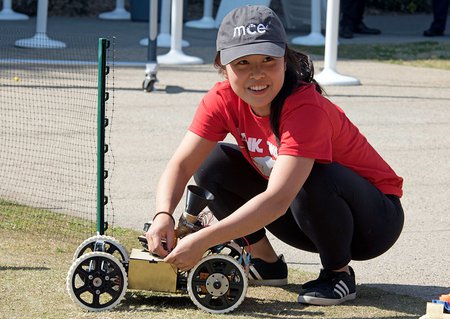 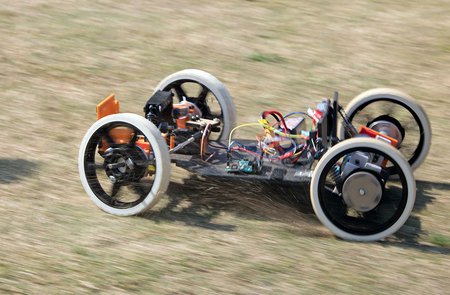 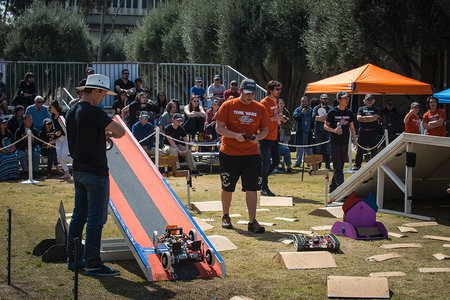 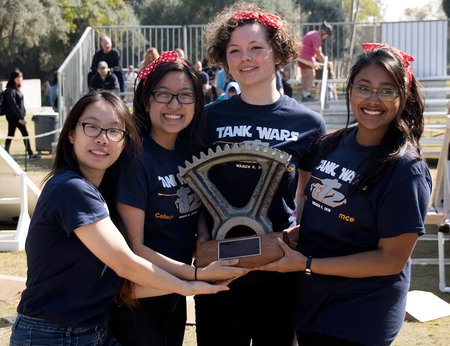 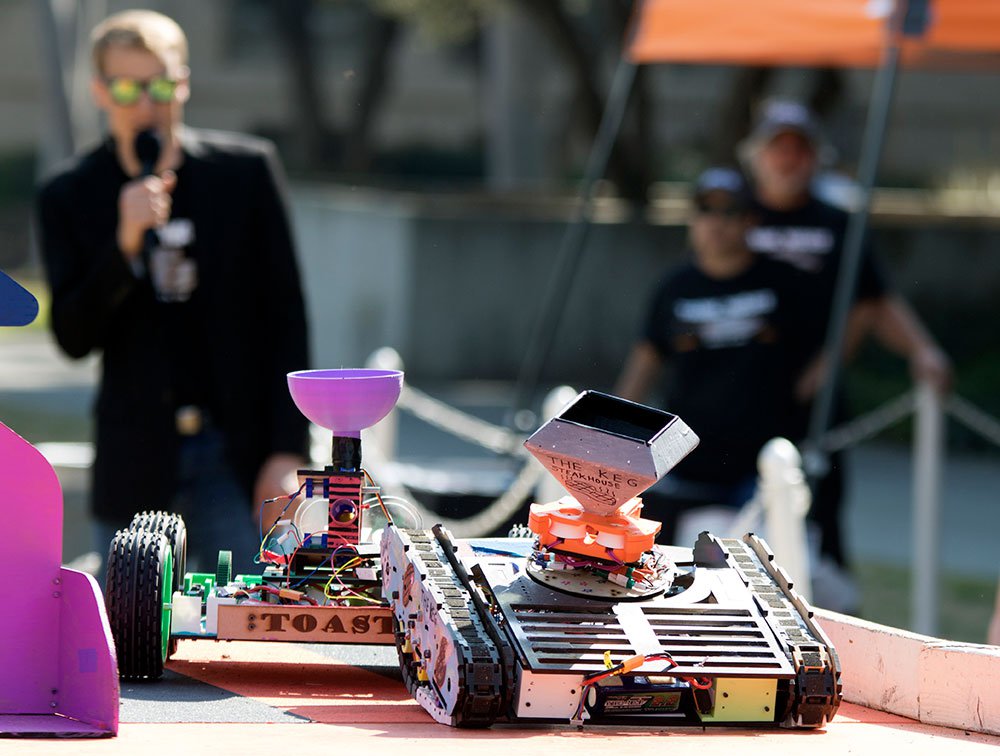 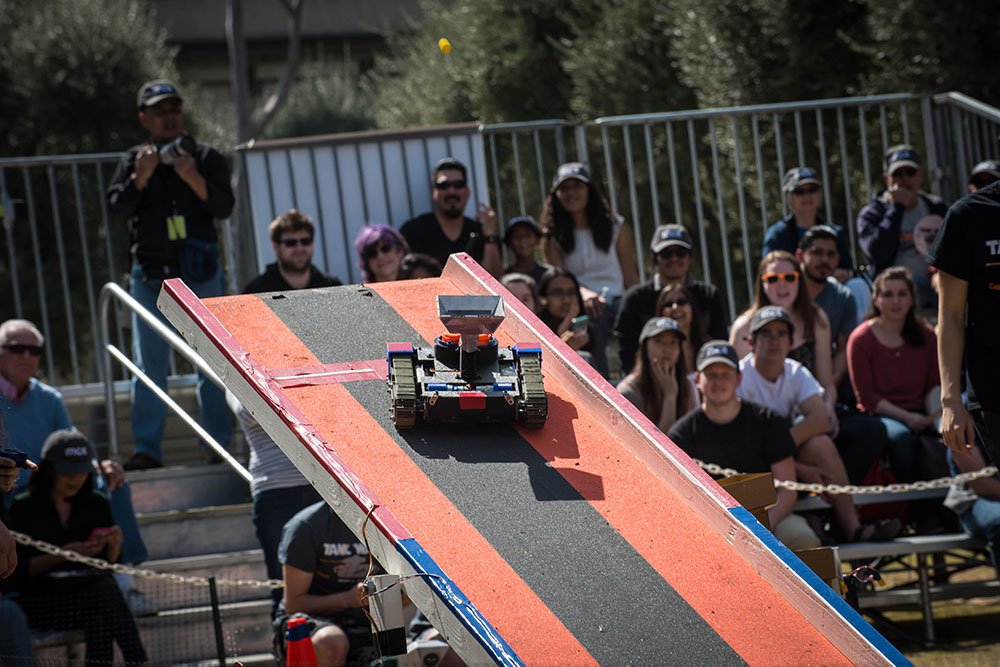 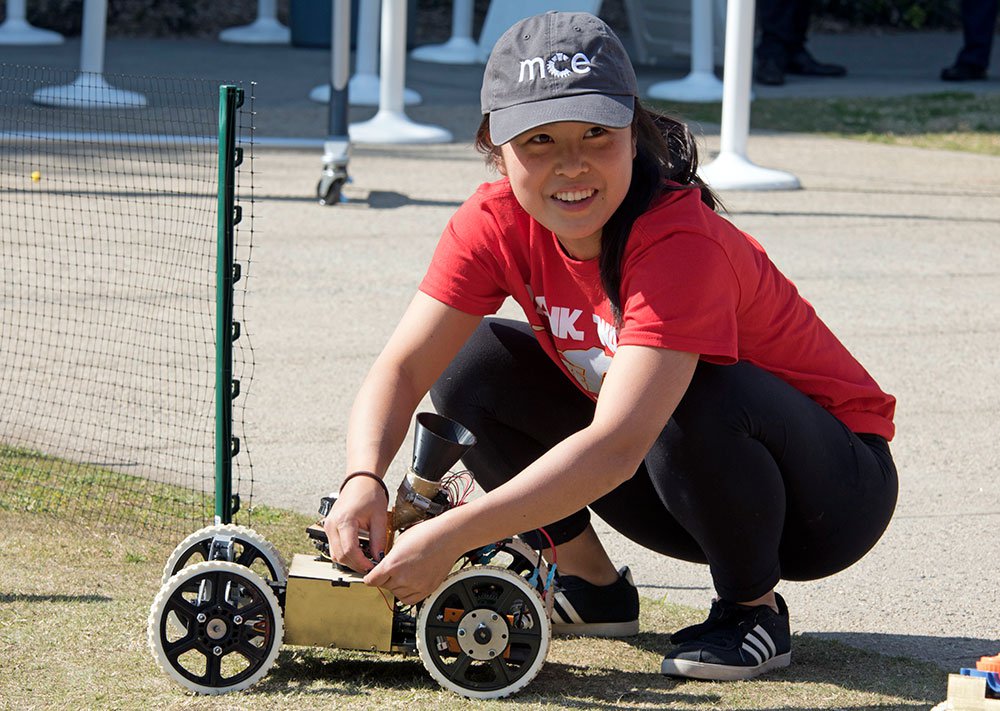 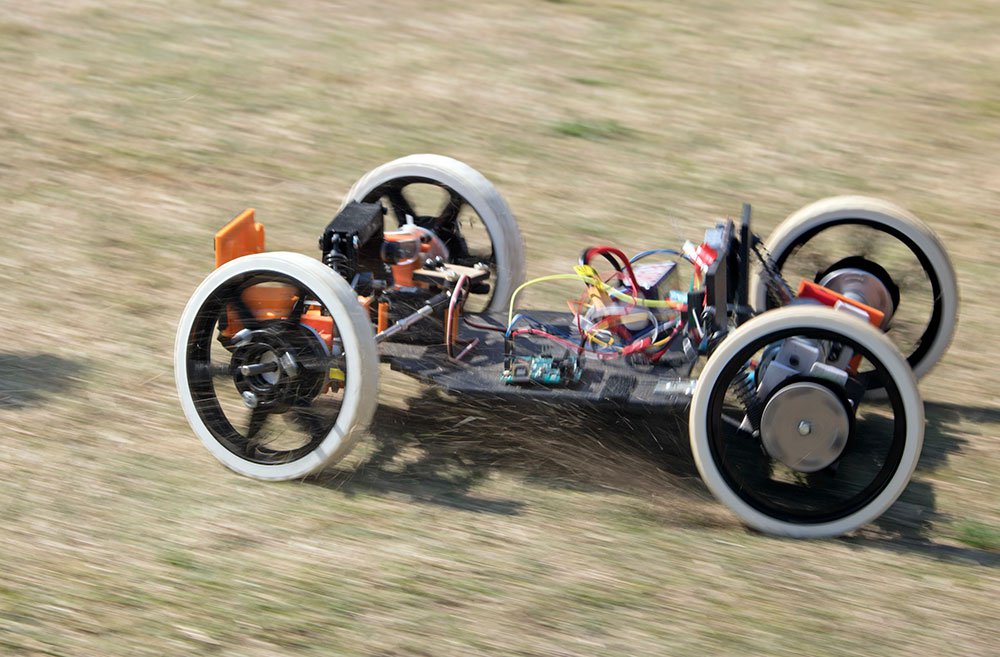 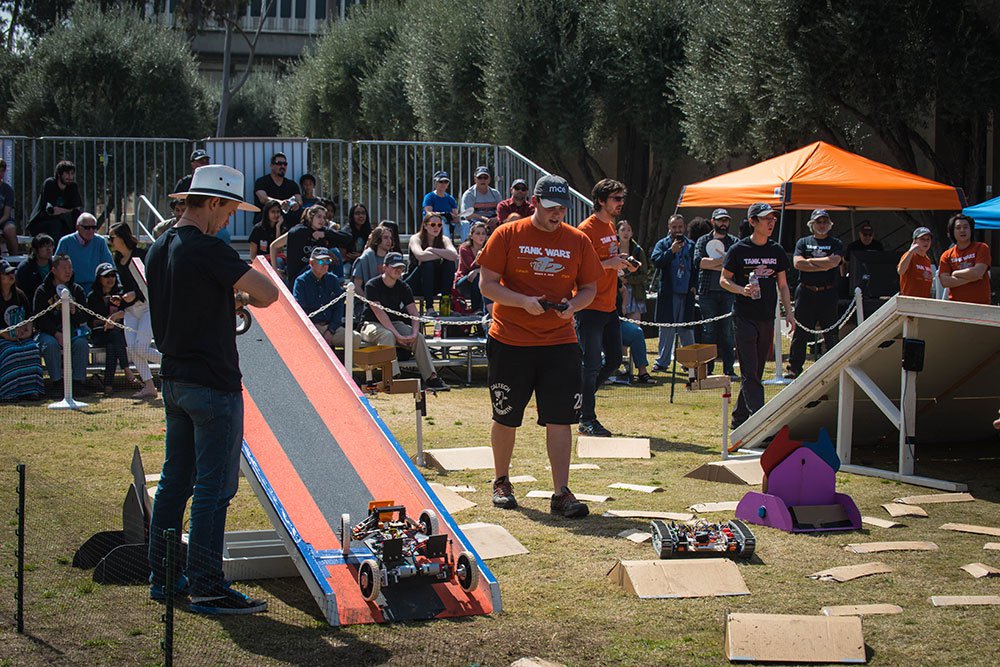 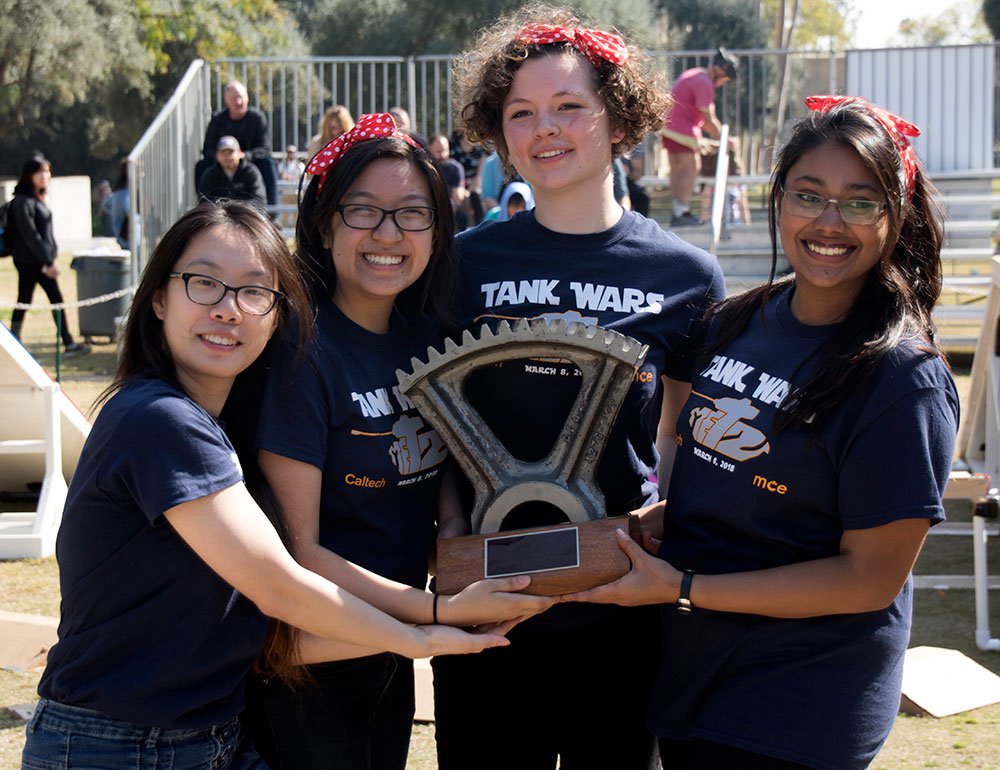