When it comes to telescopes, bigger is almost always better. Larger telescopes collect more light, enabling them to see the farthest and faintest objects in the sky. But older and smaller telescopes can still do important science—and, when a less-in-demand, smaller telescope is equipped with an autonomous, robotic, state-of-the-art laser adaptive optics system to erase the atmosphere's blurring effect, the data that can be obtained give us a unique window on the universe around us.

For the last three years, the world's only robotic adaptive optics system, Robo-AO, has been making new discoveries with the 60-inch telescope at Caltech's Palomar Observatory north of San Diego. One of the major projects that Robo-AO undertook was a comprehensive study of stars that were identified by NASA's Kepler space telescope as likely to host planets. Now, the instrument, developed at Caltech, is moving to a new home: the 2.1-meter telescope at Kitt Peak National Observatory in Arizona.

The hallmark of Robo-AO is its efficiency. Whereas other adaptive optics systems must be monitored and set up by several people, Robo-AO is fully robotic, which makes it 10 times more efficient than any other adaptive optics system in the world. Robo-AO is a joint project of the Caltech Optical Observatories (COO) and the Inter-University Center for Astronomy and Astrophysics (ICUAA) in Pune, India, guided by principal investigator Christoph Baranec (BS '01), a former Caltech postdoc (now a professor and Sloan Research Fellow at the University of Hawaii), and co-principal investigator Professor A. N. Ramaprakash of the IUCAA.

Budget cuts forced the National Optical Astronomy Observatory, which operates the Kitt Peak Observatory for the National Science Foundation, to seek new operators for the observatory's 2.1-meter telescope. "We immediately sent a proposal," says Shri Kulkarni, Caltech's John D. and Catherine T. MacArthur Professor of Astronomy and Planetary Science and director of the COO. "The larger size of the telescope and the excellent site made for a perfect match between Robo-AO and the 2.1-m telescope." The proposal won. Funding for three years of operation was provided through a $1 million dollar donation from Rohan Murty—an entrepreneur based in Boston and Bangalore—and his family. "Automating the discovery of the universe impacts one of mankind's oldest activities: to look up at the heavens and wonder about our place in the universe," says Murty. "This activity has been the source of inspiration for religion, poetry, literature, science, and culture in general. Hence, I am pleased to support a dedicated telescopic facility for Robo-AO, which will serve as a new frontier for what computer science can do for astronomy and for mankind, in general."

"What Robo-AO is best in the world at doing is large surveys at high angular resolution," says Reed Riddle, the project scientist for Robo-AO's Kitt Peak operation. This makes it ideal for follow-up observations of the candidate planetary systems that Kepler continues to find. Kepler detects exoplanets when they pass in front of, or transit, their stars, causing a slight dip in starlight. This allows astronomers to both discover and measure the sizes of thousands of exoplanets. "However, if another star is close to the target star, it dilutes the depth of the transit dip, which means we measure incorrect sizes for the planet candidates," says Nicholas Law, a former Caltech postdoc who is now a professor at the University of North Carolina, Chapel Hill, and a Robo-AO team member. Astronomers must study these planets in more detail to confirm that they are real and not a spurious reading caused by nearby stars. To date, Robo-AO has evaluated about 90 percent of Kepler's targets—some 3,300 potential planetary systems. In comparison, astronomers using all other adaptive optics systems in the world put together have investigated far fewer of the Kepler planet candidates.

But Robo-AO can do much more than evaluate exoplanets, Kulkarni notes. "As a dedicated facility, Robo-AO on the 2.1-m telescope can undertake other long-term studies, such as monitoring weather on Neptune, and large surveys, such as tracking and resolving asteroids. Furthermore, it is an excellent opportunity for young people to have hands-on experience with a state-of-the-art facility," he says. Indeed, Caltech graduate student Rebecca Jensen-Clem will be using Robo-AO for her thesis project to study weather on brown dwarfs, and postdoctoral fellow Dmitry Duev, though trained in radio astronomy, plans to use the facility for an ambitious study of binarity in asteroids—whether an asteroid is part of a single or double system (observing a binary orbit allows for a measurement of the masses of both members of the pair).

Over the past two decades, adaptive optics has revolutionized astronomy, giving ground-based telescopes the ability to obtain pristine views that previously had been possible only from space. Adaptive systems, now found on all large telescopes, such as the Keck Observatory in Hawaii, send a laser beam into the sky, where the light scatters off air molecules and returns to the telescope, traveling through the same atmospheric turbulence that blurs the telescope's images. Once a detector measures this blur, a deformable mirror can then warp the light in such a way that the distortion is precisely canceled out.

"Don't get me wrong, the adaptive optics on big telescopes offer us the best angular resolution," says Baranec, who also serves as the Robo-AO instrument scientist.  Robo-AO, with its high on-sky efficiency, excels in its ability to observe a large sample rapidly. Using its data, astronomers are working to determine how the prevalence of giant gas planets close to their stars depends on the presence of a companion star. Robo-AO also has discovered one of only two known quadruple star systems containing planets. Twenty science papers have been published since the system was commissioned three years ago, and several more are in progress.

In this same vein, Robo-AO has surveyed 3,000 of the nearest stars searching for multiple star systems (our solar system has only one star but many others contain stars two, three, even more stellar companions). Robo-AO will continue this program, investigating tens of thousands of stars in a survey Kulkarni describes as undertaking "galactic geography."

And there will be more extrasolar planets discovered. The Kepler mission is winding down, but its successor, the Transiting Exoplanet Survey Satellite, scheduled for launch in 2017, is expected to find tens of thousands of new worlds—which Robo-AO will be uniquely suited to study. "The Robo-AO team is making one-sixth of its observing time available to the U.S. astronomical community. In addition we have had discussions with several colleagues at astronomy departments in the U.S., India, and Europe with the view of expanding the range of astronomical research that can be undertaken by Robo-AO," Kulkarni says.

So while it may not be the biggest system in use, Kulkarni says, Robo-AO does its job very well. "Not everything has to be big telescopes or big space missions," he says. "It's a little celebration of less-is-more." 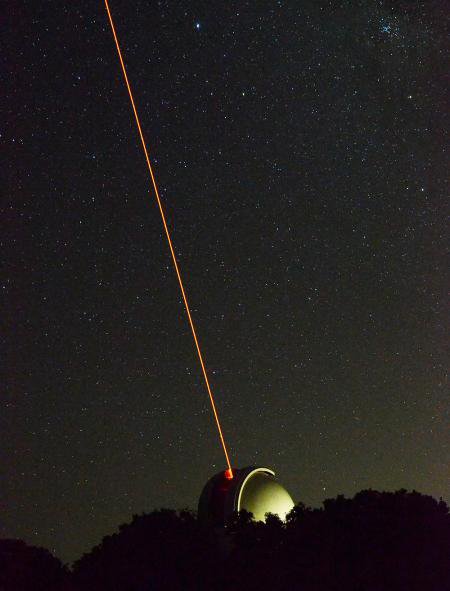 Robo-AO in operation at the Palomar Observatory 1.5-m telescope. The laser beam is not visible to the human eye; a camera sensitive to ultraviolet light was used to capture this image. Credit: Christoph Baranec/University of Hawai'i 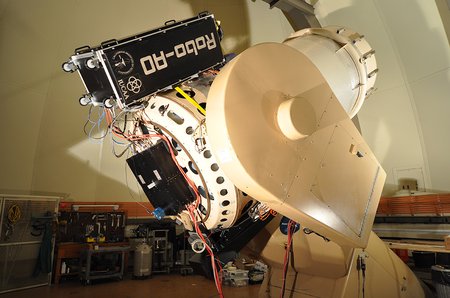 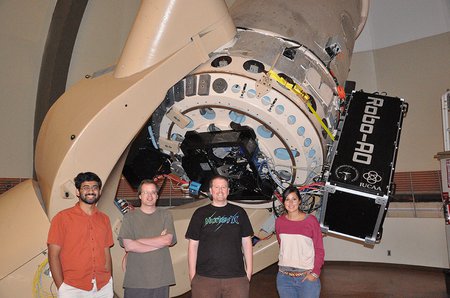 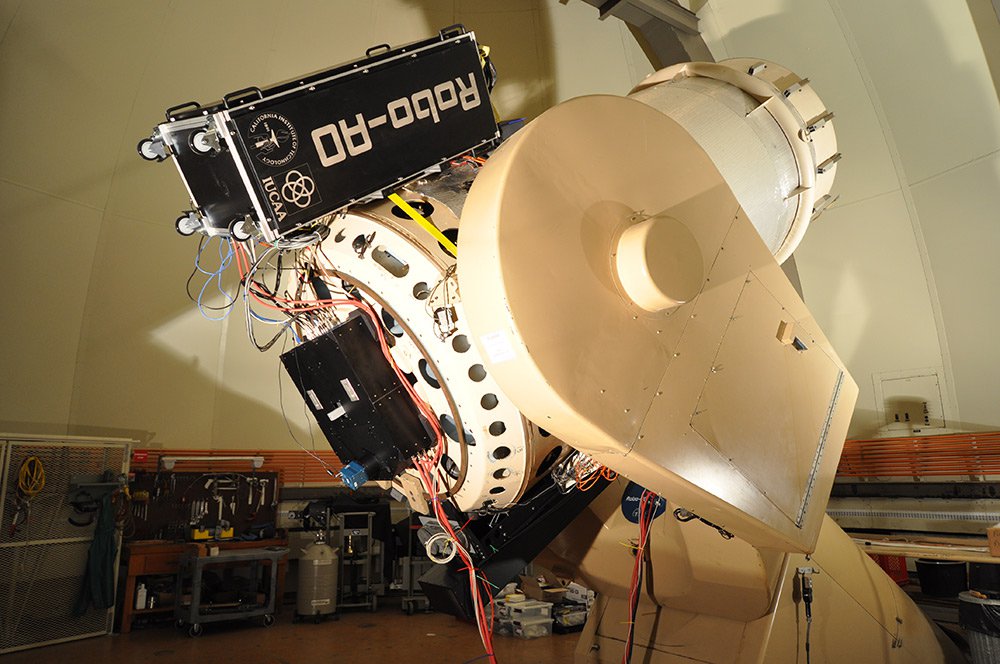 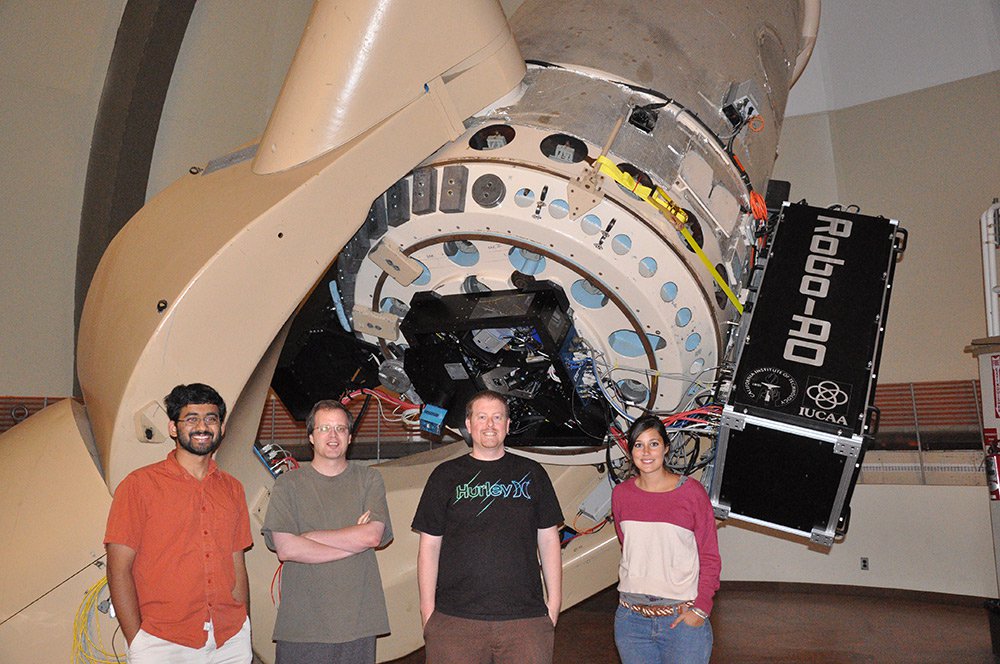