Robert J. McEliece (BS '64, PhD '67), Caltech alumnus and Allen E. Puckett Professor and Professor of Electrical Engineering, Emeritus, passed away on May 8 at the age of 76. He made fundamental contributions to the theory and design of channel codes for communication systems—including the interplanetary telecommunication systems that were used by the Voyager, Galileo, Mars Pathfinder, Cassini, and Mars Exploration Rover missions.

"Bob McEliece was renowned for his contributions to a wide range of problems in information transmission and storage," says Guruswami (Ravi) Ravichandran, Caltech's John E. Goode, Jr., Professor of Aerospace and Mechanical Engineering and the Otis Booth Leadership Chair of the Division of Engineering and Applied Science. "His contributions are drivers for numerous applications in modern communications. He was an outstanding researcher and a beloved and inspiring teacher, mentor, and colleague."

McEliece was born in Washington, D.C., on May 21, 1942. He earned a bachelor's degree in mathematics from Caltech in 1964 and, after spending a year of graduate study at the University of Cambridge's Trinity College, returned to Caltech to earn a PhD in mathematics in 1967. After that, he worked his way up the ranks of the Information Processing Group of the Communications Systems Research Section at JPL, which Caltech manages for NASA. He briefly left Southern California to take a professorship at the Coordinated Science Laboratory of the University of Illinois but returned in 1982 to accept a faculty position in electrical engineering at Caltech. McEliece was named an Allen E. Puckett Professor in 1997 and served as executive officer for the electrical engineering department from 1990 to 1999. He retired in 2007. 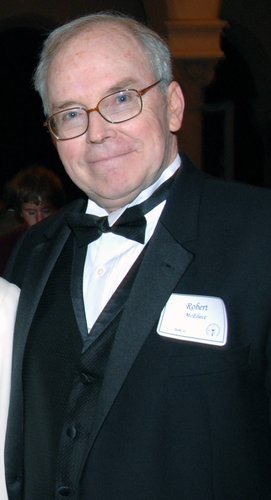 Robert McEliece at his retirement in 2007
Image Lightbox 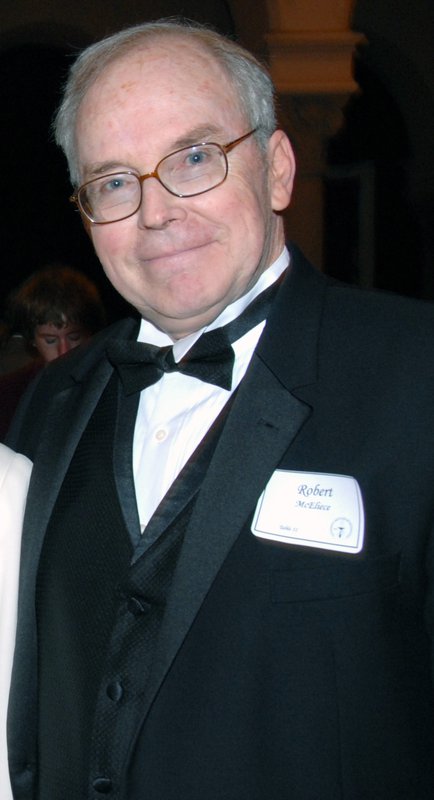 Robert McEliece at his retirement in 2007
Download Full Image

His former colleagues recall McEliece as enthusiastic and brilliant, a man who could factor a degree 32 polynomial in his head but who also loved to sing and would perform at technical conferences and events, taking popular songs and rewriting the lyrics to add technical content about his field. In fact, when he won the Claude E. Shannon Award (the highest honor given by the Information Theory Society), he was invited to give a lecture to his peers. "Bob gave his talk in a top hat and tails, and performed a song that he had updated for that purpose, complete with musical accompaniment," says Michelle Effros, George Van Osdol Professor of Electrical Engineering at Caltech.

As a faculty member at Caltech, he won awards for excellence in teaching five times and mentored more than 30 PhD students. "The brilliance of his speaking style was in its rare mix of showmanship and deep technical insight. He had a knack both for charming his audience with his wit and for breaking down complex concepts into their barest essence, presenting them in a way that seemed eminently simple and clear," Effros says.

"His approach to teaching and to giving talks was an inspiration to me in my own teaching," says colleague Jehoshua (Shuki) Bruck, Gordon and Betty Moore Professor of Computation and Neural Systems and Electrical Engineering at Caltech. "He took communication seriously, at a personal level." McEliece also let his research interests extend beyond his own specific subdiscipline, for example exploring problems related to what was, in the '80s, the nascent field of neural networks, which are computing systems inspired by biological brains. In 1987, he authored an influential paper on the potential capacity of artificial neural networks.

McEliece was instrumental in growing the study of information sciences at Caltech and in mentoring the young faculty who joined the electrical engineering department. "I cannot imagine having a better mentor during my initial years at Caltech," says Babak Hassibi, the Mose and Lillian S. Bohn Professor of Electrical Engineering and Mathematical Sciences. "Bob was always generous and kind with his time and advice. He possessed a unique combination of deep insight and wisdom on the one hand and playfulness and curiosity on the other, which made every interaction with him both rewarding and memorable. He was a true scholar." 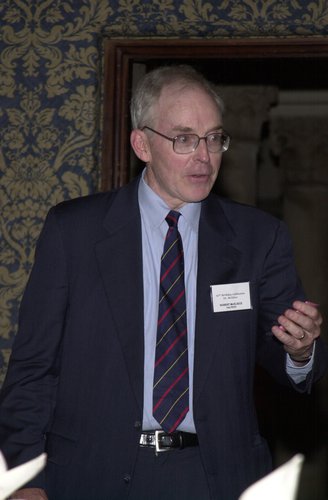 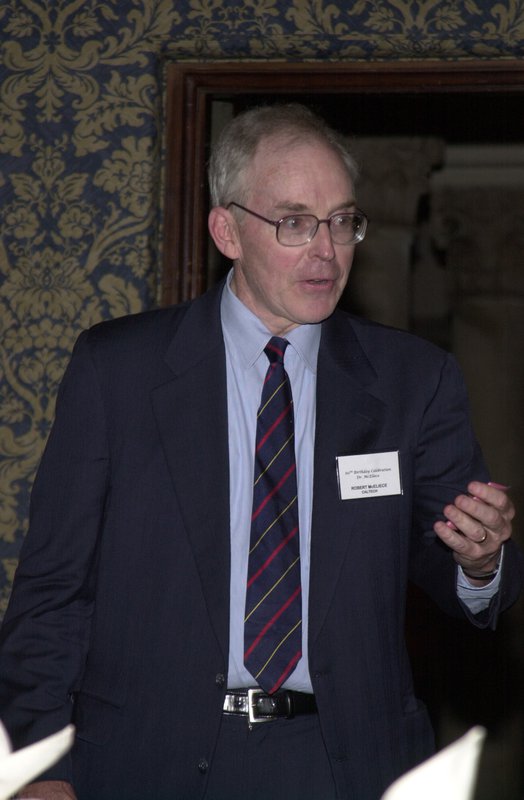 McEliece is perhaps best known in his field for his work on algebraic error-correcting codes. In particular, he was among the earliest researchers to work on convolutional codes, a type of signal coding that was developed in the 1950s that is used in telecommunications and deep-space communications. With Elwyn Berlekamp of UC Berkeley, he demonstrated the difficulty of decoding general linear codes. Based on that, in 1978, he developed the McEliece cryptosystem, which was the first asymmetric encryption system (which encrypts data using pairs of nonidentical numerical "keys") to use randomization in the encryption process. The McEliece cryptosystem has received attention of late as a candidate to create an encryption system that would be immune to attacks by a quantum computer.

"We have lost another of the stars by which we all navigated the field of coding theory," says McEliece's friend and colleague Michael Tanner, senior academic counsel at the Association of Public and Land-Grant Universities and creator of the "Tanner graph," a system by which small codes are used to construct longer ones.

Beginning in 1978, McEliece served for several decades as a consultant at JPL. "A good day at JPL was when Bob came for his consulting day on Tuesday," says Fabrizio Pollara, manager of communications architectures and research at JPL, who collaborated with McEliece in the '80s."We yearned for those technical or just witty conversations. He inspired us for so many years with his enthusiasm and the generous outpouring of his vast knowledge, and his exceptional ability to make a simple but profound remark that triggered a new idea and changed a shallow paper into an interesting one."

"Somebody once asked me how it feels to be working with such a famous researcher, and I immediately replied: 'Terrible! He knows already all the answers!' And I made sure that Bob heard me across the hallway!'" Pollara says.

In the early '90s, McEliece lent his expertise to the Galileo Mission to Jupiter. During the spacecraft's mission, its high-gain antenna failed to properly deploy, which could have prevented the spacecraft from sending photos and data back to Earth. McEliece and his colleagues reprogrammed Galileo's onboard convolutional encoder to allow it to send compressed data using its low-gain antenna via the NASA Deep Space Network of large antennas and communications facilities. The spacecraft was thus able to meet the majority of its mission goals.

During the late '90s, McEliece shared office space during his Tuesdays at JPL with Dariush Divsalar, who is now a JPL Fellow and a principal scientist at JPL. Divsalar collaborated on several projects with McEliece, and recalls their work proving the utility of turbo codes, a class of high-performance forward error-correction codes that are now widely used, but were initially viewed with skepticism by the information science community. "Working those years with Bob were my golden years," Divsalar says. McEliece's subsequent work in this area with his students Hui Jin and Amod Khandekar led to the invention of irregular repeat accumulate (IRA) codes that are now used in mobile communications and satellite communications.

McEliece was named a Life Fellow of the Institute of Electrical and Electronics (IEEE) and has been the recipient of numerous awards, including the IEEE Alexander Graham Bell Medal in 2009, the IEEE Claude E. Shannon Award in 2004, and a NASA Group Achievement Award for the Advanced Error-Correcting Code Research and Development Team in 1992. He is the author of three textbooks and more than 250 research articles in collaboration with more than 75 co-authors.

McEliece was also proud to have an Erdős number of 1. An "Erdős number" indicates the collaborative distance with the incredibly prolific Hungarian mathematician Paul Erdős, who produced a record of more than 1,500 mathematical papers in his lifetime - a sort of "Six Degrees of Kevin Bacon" for mathematicians. McEliece earned his low number by collaborating directly with Erdős on a paper entitled "Ramsey bounds for graph products," which was published in 1971.

McEliece is survived by his brother Don; sister Barbara; his four children, Angela, Karen, Elizabeth, and Davey; and his granddaughter Zadie.