For over 25 years, Paul Sternberg has been studying worms—how they develop, why they sleep, and, more recently, how they communicate. Now, he has flipped the script a bit by taking a closer look at how predatory fungi may be tapping into worm conversations to gain clues about their whereabouts.

Nematodes, Sternberg's primary worm interest, are found in nearly every corner of the world and are one of the most abundant animals on the planet. Unsurprisingly, they have natural enemies, including numerous types of carnivorous fungi that build traps to catch their prey. Curious to see how nematophagous fungi might sense that a meal is present without the sensory organs—like eyes or noses—that most predators use, Sternberg and Yen-Ping Hsueh, a postdoctoral scholar in biology at Caltech, started with a familiar tool: ascarosides. These are the chemical cues that nematodes use to "talk" to one another.

"If we think about it from an evolutionary perspective, whatever the worms are making that can be sensed by the nematophagous fungi must be very important to the worm—otherwise, it's not worth the risk," explains Hsueh. "I thought that ascarosides perfectly fit this hypothesis."

In order to test their idea, the team first evaluated whether different ascarosides caused one of the most common nematode-trapping fungi species to start making a trap. Indeed, it responded by building sticky, web-like nets called adhesive networks, but only when it was nutrient-deprived. It takes a lot of energy for the fungi to build a trap, so they'll only do it if they are hungry and they sense that prey is nearby. Moreover, this ascaroside-induced response is conserved in three other closely related species. But, the researchers say, each of the four fungal species responded to different sets of ascarosides.

"This fits with the idea that different types of predators might encounter different types of prey in nature, and also raises the possibility that fungi could 'read' the different dialects of each worm type," says Sternberg. "What's cool is that we've shown the ability for a predator to eavesdrop on essential prey communication. The worms have to talk to each other using these chemicals, and the predator is listening in on it—that's how it knows the worms are there."

Sternberg and Hsueh also tested a second type of fungus that uses a constricting ring to trap the worms, but it did not respond to the ascarosides. However, the team says that because they only tested a handful of the chemical cues, it's possible that they simply did not test the right ones for that type of fungus.

"Next, the focus is to really study the molecular mechanism in the fungi—how does a fungus sense the ascarosides, and what are the downstream pathways that induce the trap formation," says Hsueh. "We are also interested in evolutionary question of why we see this ascaroside sensing in some types of fungi but not others."

In the long run, their findings may help improve methods for pest management. Some of these fungi are used for biocontrol to try and keep nematodes away from certain plant roots. Knowing more about what stimulates the organisms to make traps might allow for the development of better biocontrol preparations, says Sternberg.

The full results of Sternberg and Hsueh's study can be found in the paper, "Nematode-trapping fungi eavesdrop on nematode pheromones," published in the journal Current Biology. 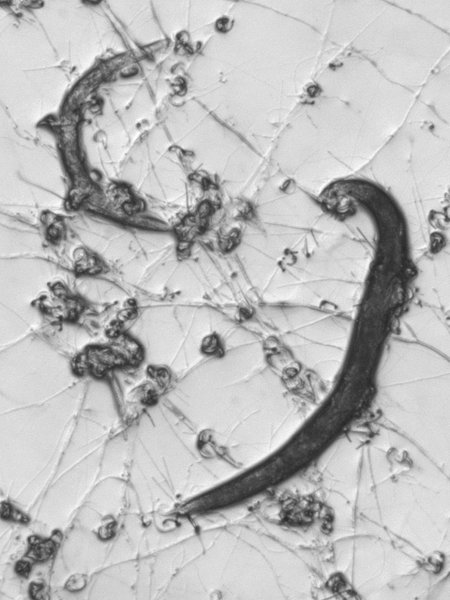 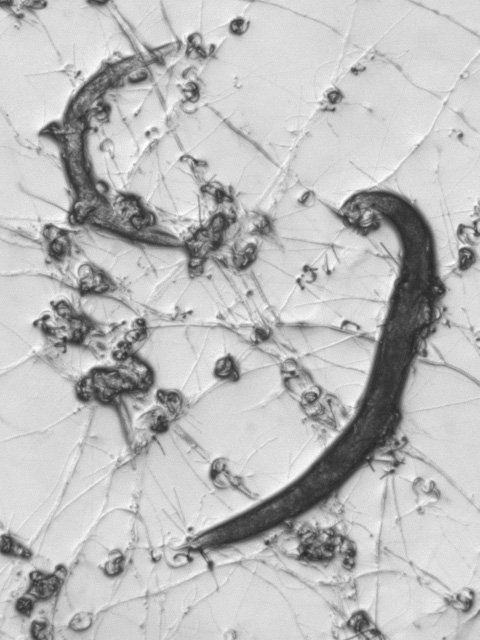