If you walk into your local drug store and ask for a supplement to help you sleep, you might be directed to a bottle labeled "melatonin." The hormone supplement's use as a sleep aid is supported by anecdotal evidence and even some reputable research studies. However, our bodies also make melatonin naturally, and until a recent Caltech study using zebrafish, no one knew how—or even if—this melatonin contributed to our natural sleep. The new work suggests that even in the absence of a supplement, naturally occurring melatonin may help us fall and stay asleep.

The study was published online in the March 5 issue of the journal Neuron.

"When we first tell people that we're testing whether melatonin is involved in sleep, the response is often, 'Don't we already know that?'" says Assistant Professor of Biology David Prober. "This is a reasonable response based on articles in newspapers and melatonin products available on the Internet. However, while some scientific studies show that supplemental melatonin can help to promote sleep, many studies failed to observe this, so the effectiveness of melatonin supplements is controversial. More importantly, these studies don't tell you anything about what naturally occurring melatonin normally does in the body."

There are several factors at play when you are starting to feel tired. Sleep is thought to be regulated by two mechanisms: a homeostatic mechanism, which responds to the body's internal cues for sleep, and a circadian mechanism that responds to external cues such as darkness and light, signaling appropriate times for sleep and wakefulness.

For years, researchers have known that melatonin production is regulated by the circadian clock, and that animals produce more of the hormone at night than they do during the day. However, this fact alone is not enough to prove that melatonin promotes sleep. For example, although nocturnal animals sleep during the day and are active at night, they also produce the most melatonin at night.

In the hopes of determining, once and for all, what role the hormone actually plays in sleep, Prober and his team at Caltech designed an experiment using the larvae of zebrafish, an organism commonly used in research studies because of its small size and well-characterized genome. Like humans, zebrafish are also diurnal—awake during the day and asleep at night—and produce melatonin at night.

But how exactly can you tell if a young zebrafish has fallen asleep? There are behavioral criteria—including how long a zebrafish takes to respond to a stimulus, like a knock on the tank, for example. "Based on these criteria, we found that if the zebrafish larvae don't move for one or more minutes, they are in a sleep-like state," Prober says.

To test the effect of naturally occurring melatonin on sleep, the researchers first compared the sleep patterns of normal, or "wild-type," zebrafish larvae to those of zebrafish larvae that are unable to produce the hormone because of a mutation in a gene called aanat2. They found that fish with the mutation slept only half as long as normal fish. And although a normal zebrafish begins to fall asleep about 10 minutes after "lights out"—about the same amount of time it takes a human to fall asleep—it took the aanat2 mutant fish about twice as long.

"This result was surprising because it suggests that almost half of the sleep that the larvae are getting at night is due to the effects of melatonin," Prober says. "That suggests that melatonin normally plays an important role in sleep and that you need this natural melatonin both to fall asleep and to stay asleep."

In both humans and zebrafish, melatonin is produced in a part of the brain called the pineal gland. To confirm that the mutation-induced reduction in sleep was actually due to a lack of melatonin, the researchers next used a drug to specifically kill the cells of the pineal gland, thus halting the hormone's production. The drug-treated fish showed the same reduction in sleep as fish with mutated aanat2. When the drug treatment stopped, allowing pineal gland cells to regenerate, the fish returned to a normal sleep pattern.

Sleep patterns, like many other biological and behavioral processes, are known to be regulated by the circadian clock. In an organism, the circadian clock aligns these processes with daily changes in the environment, such as daylight and darkness at night. However, while a great deal is known about how the circadian clock works, it was not known how the clock regulates sleep. Because the researchers had determined that melatonin is involved in promoting natural sleep, they next asked whether melatonin mediates the circadian regulation of sleep.

They first raised both wild-type and aanat2 mutant zebrafish larvae in a normal light/dark cycle—14 hours of light followed by 10 hours of darkness—to entrain their circadian clocks. Then, when the larvae were 5 days old, they switched both populations to an environment of constant darkness. In this "free running" condition, the circadian clock continues to function in the absence of daily light and dark signals from the environment. As expected, the wild-type fish maintained their regular circadian sleep cycle. The melatonin-lacking aanat2 mutants, however, showed no cyclical sleep patterns.

"This was really surprising," says Prober. "For years, people have been looking in rodents for a factor that's required for the circadian regulation of sleep and have found a few other candidate molecules that, like melatonin, are regulated by the circadian clock and can induce sleep when given as supplements. However, mutants that lack these factors had normal circadian sleep cycles," says Prober. "One thought was that maybe all of these molecules work together and that you'd have to make mutations in multiple genes to see an effect. But we found that eliminating one molecule, melatonin, is the whole show. It's one of those rare and surprisingly clear results."

After finding that melatonin is necessary for the circadian regulation of sleep, Prober next wanted to ask how it does this. To find out, Prober and his colleagues looked to a neuromodulator called adenosine—part of the homeostatic mechanism that promotes sleep. As an animal expends energy throughout the day, adenosine accumulates in the brain causing the animal to feel more and more tired—a pressure that is relieved through sleep.

The researchers treated both wild-type and melatonin-deficient aanat2 mutant fish with drugs that activate adenosine signaling. They found that although the drugs had no effect on the wild-type fish, they restored normal sleep amounts in aanat2 mutants. This result suggests that melatonin may be promoting sleep, in part, by turning on adenosine—providing a long sought-after link between the homeostatic and circadian processes that regulate sleep.

Prober and his colleagues hypothesize that the circadian clock drives the production of melatonin, which then promotes sleep through yet-to-be-determined mechanisms while also stimulating adenosine production, thus promoting sleep through the homeostatic pathway. Although more experiments are needed to confirm this model, Prober says that the preliminary results may offer insights about human sleep as well.

"Zebrafish are vertebrates and their brain is structurally similar to ours. All of the markers that we and others have tested are expressed in the same regions of the zebrafish brain as in the mammalian brain," he says. "Zebrafish sleep and human sleep are likely different in some ways, but all of our drug and genetic data indicate that the same factors—working through the same mechanisms—have similar effects on sleep in zebrafish and mammals. "

Prober's work with the circadian regulation of sleep follows in the conceptual—and physical—footsteps of late Caltech geneticist Seymour Benzer, who founded genetic studies of the circadian clock. In experiments in fruit flies, Benzer and his graduate student, the late Ronald Konopka (PhD '72), discovered the first circadian-rhythm mutants. Benzer passed away in 2007, and when Prober came to Caltech in 2009, he was offered Benzer's former office and lab space. "Seymour Benzer's work in fruit flies launched the beginning of our understanding of the molecular circadian clock," Prober says, "so it's really special to be in this space, and it's gratifying that we're taking the next step based on his work."

The results of Prober's study are published in the journal Neuron in an article titled, "Melatonin is required for the circadian regulation of sleep." Other Caltech coauthors on the paper are graduate student Avni Gandhi and postdoctoral scholars Eric Mosser and Grigorios Oikonomou. This work was funded by grants from the National Institutes of Health, the Mallinckrodt Foundation, the Rita Allen Foundation, the Brain and Behavior Research Foundation as well as a Della Martin Postdoctoral Fellowship to Mosser. 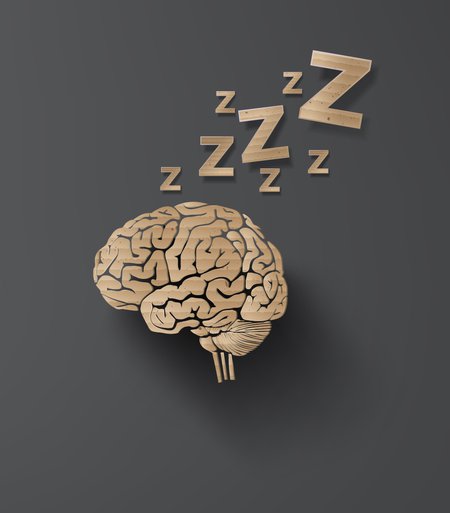 Credit: iStockphoto Melatonin is Required for the Circadian Regulation of Sleep 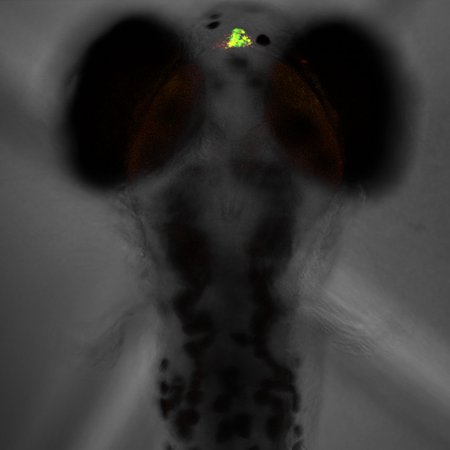 The larval zebrafish pineal gland, which produces the hormone melatonin, is shown in red for aanat2, a gene which is required for the natural production of melatonin, and in green for an enzyme used to ablate the pineal gland. In studying this area of the brain and the effects of blocking the natural synthesis of melatonin in this region, Caltech researchers recently showed that melatonin normally plays an important role in sleep, helping zebrafish larvae to both fall asleep and stay asleep. Credit: A. Gandhi/Caltech 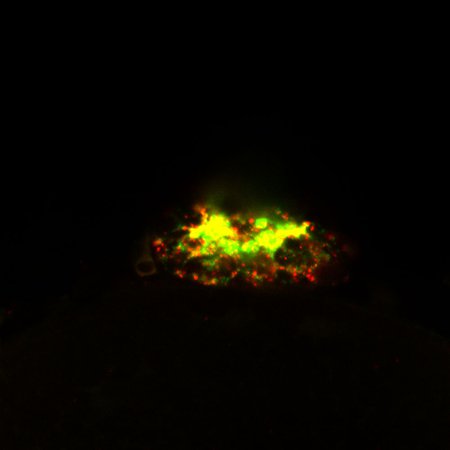 A close up of the pineal gland. Credit: A. Gandhi/Caltech This video, recorded at night, shows how sleep and wakefulness are monitored in zebrafish larvae. Individual larva are placed into each well of a 96-well plate, and the locomotor activity of each animal is monitored over several days and nights using an infrared camera. Larvae in the left half of the plate are wildtype, and thus mostly inactive and asleep. Larvae in the right half have a mutation that reduces sleep at night. As a result, most of these animals are awake and actively swimming. Credit: D. Prober/Caltech
Image Gallery Lightbox 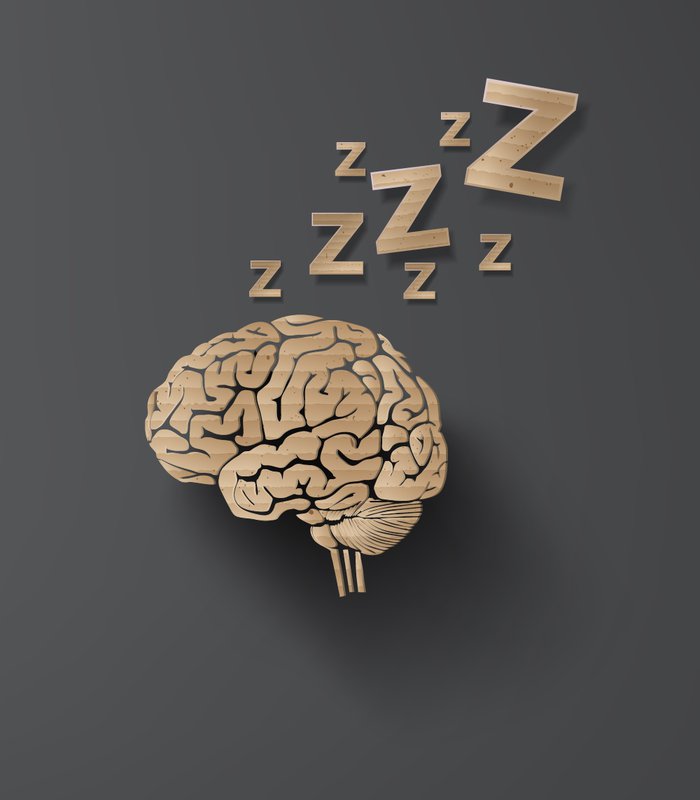 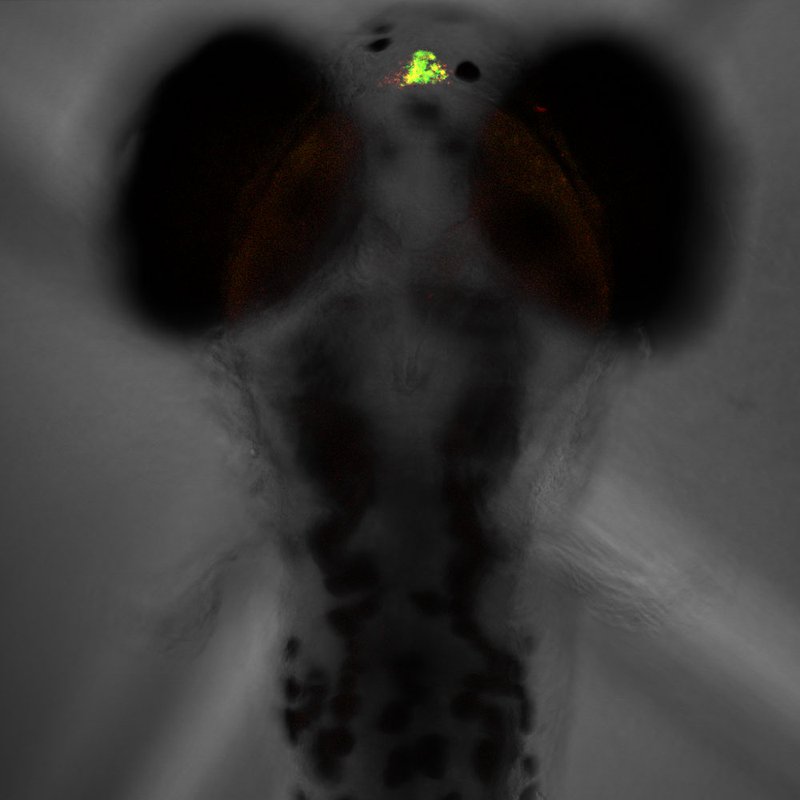 The larval zebrafish pineal gland, which produces the hormone melatonin, is shown in red for aanat2, a gene which is required for the natural production of melatonin, and in green for an enzyme used to ablate the pineal gland. In studying this area of the brain and the effects of blocking the natural synthesis of melatonin in this region, Caltech researchers recently showed that melatonin normally plays an important role in sleep, helping zebrafish larvae to both fall asleep and stay asleep.
Credit: A. Gandhi/Caltech
Download Full Image 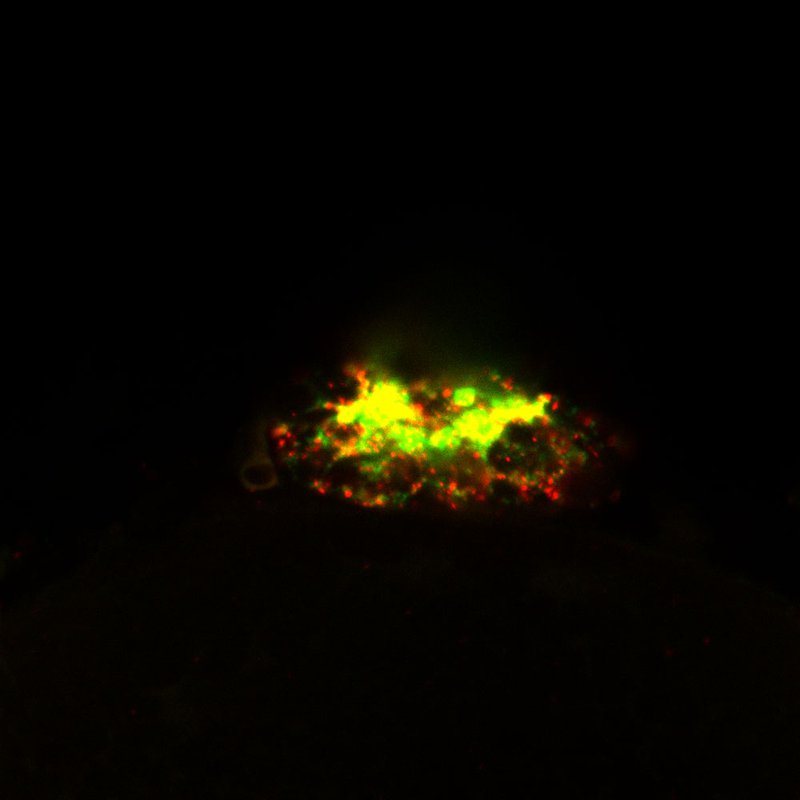 A close up of the pineal gland.
Credit: A. Gandhi/Caltech
Download Full Image