Cancer is capable of rapidly developing resistance to therapeutic drugs, rendering those drugs harmless—often before they have a chance to work. Now, researchers at Caltech and their colleagues have identified how at least one brain cancer, called glioblastoma multiforme (GBM), adapts so fast—and they show that by formulating the right combination of drugs, doctors could potentially overcome this resistance and stop a tumor in its tracks.

The work appears in the April 12 issue of the journal Cancer Cell.

Some cancer drugs are designed to target a cell's chemical circuitry. This network of signaling pathways controls how a healthy cell functions, but in many cancers, the pathways are hyperactivated, directly leading to the aggressive nature of the disease. By blocking a key pathway, a drug can, in principle, stop the tumor from growing.

"The concept is that if you block a key node in the pathway, then the communication can't proceed and the cells can't get the signals to divide and multiply," explains Jim Heath, the Elizabeth W. Gilloon Professor of Chemistry and co-corresponding author on the paper.

In reality, however, tumors can become resistant to a drug even if the drug works exactly as designed. With GBM, such resistance develops in almost every patient. "In some patients, you can treat with a drug that does everything you could want it to do, but you would never know that the drug hit the target because the tumor adapts so quickly," Heath says.

Some scientists have suspected that the cancer becomes resistant through Darwinian-type evolution, in a process similar to how bacteria develop resistance to antibiotics. That is, the genetic differences of certain cancer cells may make those cells resistant to a drug. Nonresistant cells are killed by the drug and their death leaves room for the naturally resistant cells—and tumors—to grow and multiply.

However, this mechanism was not what Heath and his colleagues found in studies of tissue from glioblastoma patients. Instead, the researchers discovered that the cancer cells that developed resistance to a drug were the same cells that had responded to the drug. When the drug blocks a signaling pathway in a cancer cell, they realized, the cell simply finds a detour, like a GPS navigator that reroutes to avoid traffic.

"You can block a key part," Heath says, "and the cells will respond to route around that part you blocked."

This notion of shifting pathways is not new, but the work is the first to show that the process can happen in as little as two days. In particular, the researchers found that the changes occur with a specific drug (CC214‑2) that targets a central GBM signaling-protein called mTOR. When mTOR is inhibited, certain GBM signaling pathways are repressed, but others are activated.

To map the detours, the researchers separated individual GBM cells from patient tumors and measured the levels of several key proteins in the cells. These proteins—called phosphoproteins because they are activated by the addition of a phosphoryl group to a molecule—carry signals throughout the cell. Measurements of the abundance of the proteins showed that the drug was effective.

The story was different at the single-cell level, at which Heath and his colleagues not only measured the levels of proteins in individual cells, but also the signaling between those proteins. For example, if protein A signals protein B, then the levels of A, as measured across many single cells, will correlate with the levels of B. By measuring the presence of several such proteins, the researchers could infer the structure of the protein signaling network.

They discovered that after the drug was introduced, the cell activated new pathways that previously had been dormant. This drug-induced pathway activation suggested several combination therapies that might halt the development of drug resistance, as well as drugging strategies that would have no effect.

In mice, Heath and his team tested seven therapies or therapy combinations that they predicted would—or would not—halt resistance development. The four that they predicted would not work were, indeed, ineffectual; the three they thought would work, did. The researchers then showed that they could see similar effects in GBM patient tissues, as well as in melanoma tumor models. This kind of rapid drug adaptation by tumors may occur in many cancer types, and helps explain how cancers can develop resistance to targeted drugs so quickly, Heath says.

The good news is that, by identifying the drug-activated signaling pathways, one may be able to find drug combinations that will suppress resistance, Heath says. Eventually, he says, clinicians may be able to analyze a patient's tumor at the single-cell level to determine the best therapy strategy.

These kinds of drug combinations would likely remain a secondary therapy against cancer—used when treatments like chemotherapy, radiation, and surgery fail. But, Heath says, they are essential for staving off the resistance that has severely limited the benefits that patients currently receive from targeted therapies.

The first authors of the Cancer Cell paper, titled "Single cell phosphoproteomics resolves adaptive signaling dynamics and informs targeted combination therapy in glioblastoma," are Wei Wei (PhD '14), a visitor in chemistry at Caltech and assistant professor at UCLA, and Young Shik Shin (MS '06, PhD '11), who now works at a biotech startup. Both are former graduate students of Heath's. A third key contributor to the work was Beatrice Gini, formerly a member of the UC San Diego (UCSD) laboratory of co-corresponding author Paul Mischel and now at UC San Francisco. Other Caltech authors include Min Xue and Kiwook Hwang (PhD '13) and graduate students Jungwoo Kim and Yapeng Su. Authors also include researchers from UCSD, the University of Verona in Italy, Northwestern University, and the Celgene Corporation. Heath is board member of and holds a financial interest in IsoPlexis, a company that is commercializing a microchip technology similar to what was used for single-cell analyses in the research described. 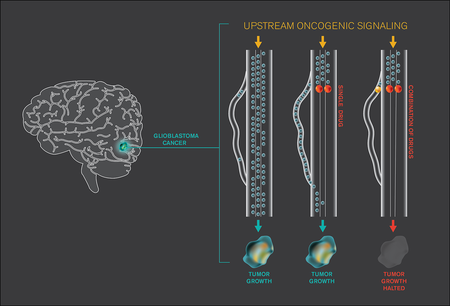 For the cancer glioblastoma, molecular signaling through the cancer cells supports tumor growth. This signaling is represented by traffic flow. A common therapeutic strategy is to use drugs that block such signaling. However, the cancer cells can rapidly adapt to such drugs to maintain the growing tumor. Single cell analysis reveals how those cancer cells adapt, so that therapy combinations that block all signaling traffic can be identified. Credit: Caltech (CC BY-ND)
Image Lightbox 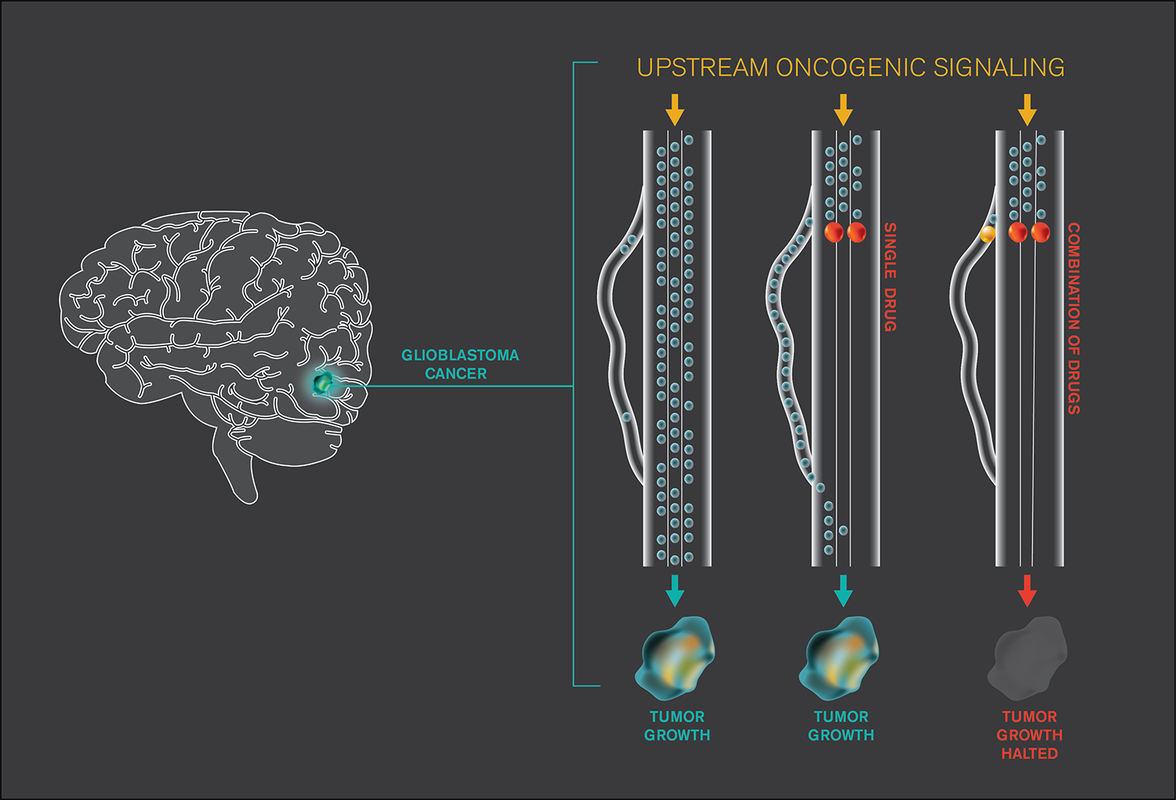 For the cancer glioblastoma, molecular signaling through the cancer cells supports tumor growth. This signaling is represented by traffic flow. A common therapeutic strategy is to use drugs that block such signaling. However, the cancer cells can rapidly adapt to such drugs to maintain the growing tumor. Single cell analysis reveals how those cancer cells adapt, so that therapy combinations that block all signaling traffic can be identified.
Credit: Caltech (CC BY-ND)
Download Full Image
Subscribe
The Caltech Weekly