Engineers at Caltech have launched a new research initiative aimed at restoring natural and stable locomotion to individuals with walking deficiencies that result from spinal cord injuries and strokes.

A number of robotics companies have begun building exoskeletons—devices with robotic legs that a person can strap into—to provide mobility to individuals who are paralyzed from the waist down. The problem is that all of the current devices require the use of crutches to maintain stability.

"Bipedal walking is difficult to achieve in a stable fashion," says Ames, Bren Professor of Mechanical and Engineering and Control and Dynamical Systems in the Division of Engineering and Applied Science. "While crutches help users of the exoskeletons to stay upright, they undercut many of the health benefits that upright locomotion might otherwise provide. In addition, they do not allow users to do anything else with their hands while walking."

This is where the work of Ames and Burdick comes in.

Hear from Aaron Ames and Joel Burdick about their work on RoAM.

Ames has built programs that allow bipedal robots to walk, making them stable by applying methods from nonlinear control theory. His approach has resulted in efficient walking by humanoid robots, along with dynamic behaviors such as running and jumping. In collaboration with the French exoskeleton manufacturer Wandercraft and his colleague Jessy Grizzle from the University of Michigan, Ames has translated these methods from robots to powered lower-body exoskeletons. The end result was the first dynamic walking exoskeleton that could be used by paraplegics without the need for crutches. This has the potential to give paraplegics hands-free mobility, Ames says. In the future, coupling his work with spinal stimulation will enable direct feedback between the user and device.

Meanwhile Burdick, Richard L. and Dorothy M. Hayman Professor of Mechanical Engineering and Bioengineering and a research scientist at JPL, which Caltech manages for NASA, has been developing spinal implants that have restored some lower-body function to wearers in clinical trials.

The implant, developed in collaboration with Caltech biomedical engineer Yu-Chong Tai, Anna L. Rosen Professor of Electrical Engineering and Medical Engineering, and AI expert Yisong Yue, assistant professor of computing and mathematical sciences, provides electrical stimulation to the epidural space around the lower spinal cord while using AI to learn, in real time, the stimulation patterns that yield the best results for wearers. In clinical trials at UCLA, the prosthetic allowed paralyzed wearers to stand on their own for up to 20 minutes at a time and voluntarily move toes, ankles, knees, and hips.

"With the stimulator and the exosuit, he was almost stepping on his own," Burdick says. "That early study was very promising."

The RoAM initiative will explore the intersection of AI-infused spinal cord stimulation using a Wandercraft Atalante model exoskeleton located at Caltech. "The Atalante exoskeleton and the walking algorithms that we created for it are already good enough to allow users to walk dynamically without crutches," Ames says. "The RoAM initiative will let them do so using less power and for a variety of different dynamic walking behaviors, with the goal of improving the users' everyday lives."

Ultimately, the RoAM initiative will go beyond exoskeletons in exploring ways to restore mobility. The dynamic walking algorithms developed by Ames have already been translated to custom-built prostheses housed in his lab, including a powered leg for above-the-knee amputees. Additionally, soft exoskeletons—or exosuits—will be developed to help stabilize walking gaits for individuals who are not paralyzed but are mobility impaired.

The RoAM initiative is supported by Wandercraft, the Zeitlin Family Discovery Fund, and the Caltech Mechanical and Civil Engineering Big Ideas Fund. 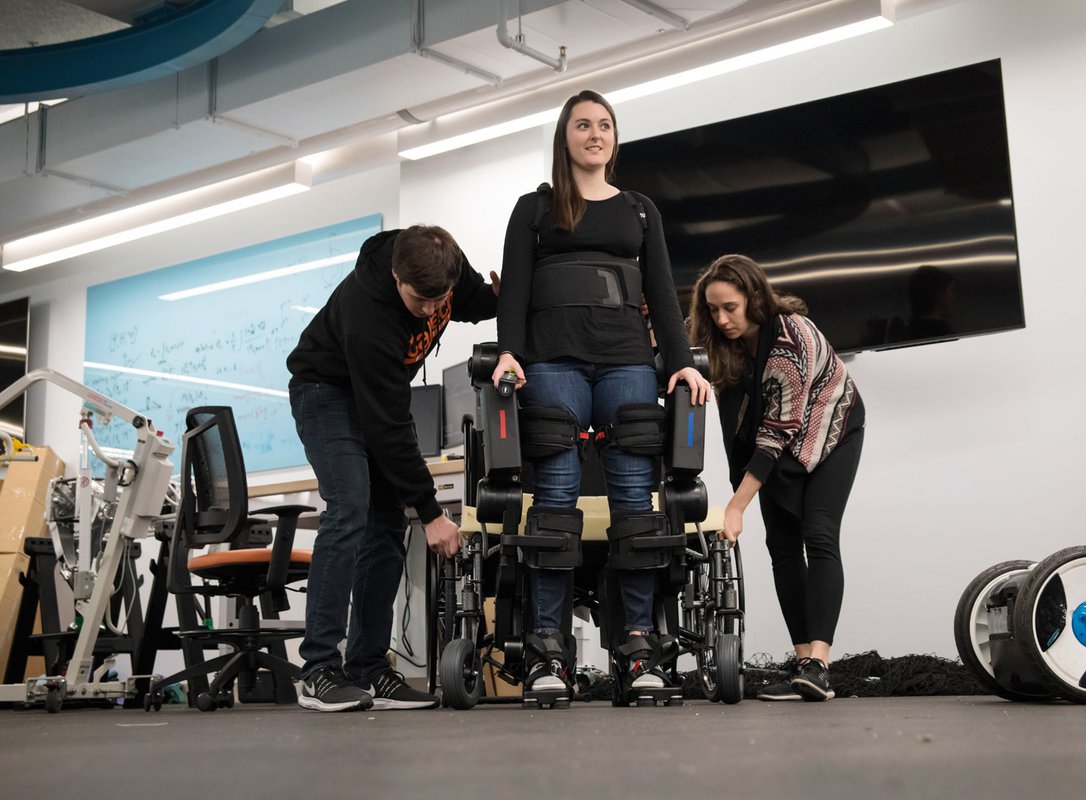