In the months following the July 5, 2019 magnitude-7.1 earthquake in Ridgecrest, California, seismologists recorded thousands of aftershocks in the region. Surprisingly, none were seen in the Coso geothermal field, an area only about 10 kilometers from the surface ruptures caused by the main shock.

Now, Caltech researchers have discovered that the operations related to geothermal energy production at Coso over the last 30 years have de-stressed the region, making the area less prone to earthquakes. These findings could indicate ways to systematically de-stress high-risk earthquake regions, while simultaneously building clean energy infrastructure.

The research was conducted in the laboratory of Jean-Philippe Avouac, Earle C. Anthony Professor of Geology and Mechanical and Civil Engineering. A paper describing the study appears in the journal Nature on July 1.

Geothermal fields, like the Coso region, are areas where the subsurface temperatures are particularly high, for example, as a result of volcanic or tectonic activity. This heat can be used create clean energy that requires no burning of fossil fuels. To harness this energy, water is pumped down into the ground, where the high temperatures heat up the water; when the water is brought back up to the surface, that heat energy is used to generate electricity.

Importantly, during the development of a geothermal field, many small earthquakes (around magnitude 4) are triggered when the water is pumped in. This is generally seen as source of concern; a number of geothermal projects have been abandoned because of such "induced" seismicity. However, in this new study, the researchers found that these little earthquakes as well as the "silent" or aseismic deformation (occurring without producing an earthquake) caused by the injection of fluid actually relieves stress and thus lowers the risk of a larger earthquake in the region.

"Geothermal energy is clean energy, and we would like to have as much clean energy as possible," says Avouac. "Induced seismicity—the triggering of many small earthquakes—during the initial development of a geothermal field has been seen as an impediment to building more of this infrastructure. But our study shows that there is actually a benefit to this. You could imagine developing geothermal fields all along the San Andreas Fault, for example, where you would both get clean energy and diminish the risk of a large earthquake."

Led by Caltech postdoctoral scholar Kyungjae Im, the team sought to model what is happening under the surface of a geothermal field that has been developed for energy production. Using a technique called synthetic aperture radar (SAR) interferometry, geoscientists have measured that the surface of the Coso geothermal field has deformed and sunk by tens of centimeters in the decades since its development. Im built a model of this deformation and determined that the underground was thermally contracting due to the water being pumped in.

Im concluded that this thermal contraction both relieved some tension in the Coso area and allowed the ground to slip "silently"—that is, in a smooth way that does not produce earthquakes. This explains why the Coso area experienced no major aftershocks after the large July 5, 2019 quake: there was less stress underground because it had already been relieved by the geothermal activity.

"Our study shows that by injecting cold water, you can actually suppress seismicity down the road," says Im. "But it is still not without risk: when you start developing the field, there is a risk that the small induced earthquakes could potentially grow into a large one. But in principle, over time, the risk of large earthquakes in the region is less than if you had not been developing the field. You are accelerating the seismicity for a little while, so the risk that you get the large one is temporarily higher. But if you look at the risk of having a magnitude 7 or 8 over a long period of time, over 15 years or so, it will be much lower. It is part of our research objective to develop methods to quantify this effect precisely. It will never be zero risk, but our study shows that we ought to do more research into this method of reducing the probability of a large earthquake."

The paper is titled "Ridgecrest Aftershocks at Coso Suppressed by Thermal Destressing." Kyungjae Im is the study's first author. In addition to Im and Avouac, additional co-authors are Caltech postdoctoral scholar Elías Heimisson and Derek Elsworth of Penn State University. Funding was provided by the National Science Foundation via the Industry-University Cooperative Research Center for Geomechanics and Mitigation of Geohazards and the Southern California Earthquake Center. 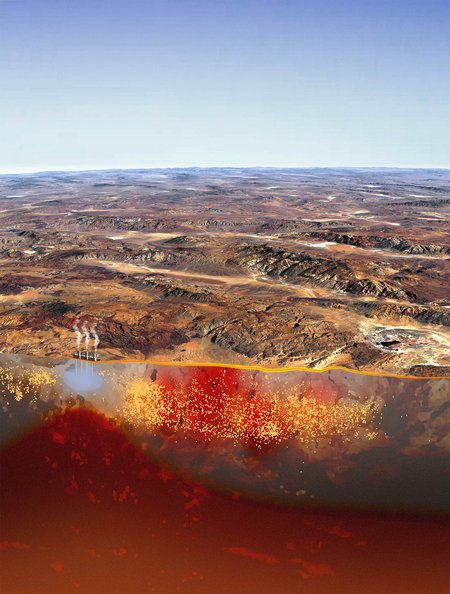