Skip to main content
Home  /  About  /  News  /  Problem Solving, One Avocado at a Time

Problem Solving, One Avocado at a Time

Among the classes a Caltech freshman can take, Physics 11 stands out on the list. For one thing, even to gain entrance to the popular seminar, students must jump through a series of intellectual hoops. Those few who make it through then embark on a unique classroom experience with no set curriculum or exams and without strict adherence to any single scientific discipline—despite the course's name. Thinking outside the box is the norm in this class, and thus it may not be surprising that those who have taken it have gone on to garner prestigious fellowships and spots in the most competitive graduate programs.

"I had been hearing about the course and its 'hurdles' ever since my first visit to Caltech as a senior in high school," says Charles Tschirhart (BS '15), now a graduate student in physics at UC Santa Barbara, "and I was excited to try my hand at the hurdles and see if I could make it into the course."

Those "hurdles" are the two open-ended problems freshmen aspiring to take Phys 11 must tackle during the fall quarter. They are given four weeks to complete each. Of the 30 to 50 students who apply annually, around half a dozen "pass" the hurdles and are accepted into the class, which starts in January of freshman year, continues through fall of sophomore year, and includes funded summer research with a professor.

The late Caltech physics professor Thomas Tombrello, who created the class almost 25 years ago, came up with the basic framework for the hurdles, which take the form of questions that have no right answer and often appear to have little to do with physics. A typical hurdle from Tombrello's era:

In the words of a song from my childhood:

Considered in an ecological sense, we have three species each of plant and animal life that interact in a finite geographical area. Supposing that we start out this system with roughly equal numbers of the six species, determine the way the system changes with time.

"The hurdles were designed to test your ability to think creatively and work hard in pursuit of your ideas, without devolving into an achievement test in physics," says Tschirhart. "Most students coming into Caltech know how to deal with the clean-cut, precisely outlined problems you might find in a textbook. The fact that the hurdles are so far outside the mainstream idea of a classic physics or math problem made me feel like I would have a chance if I worked hard enough, and that I would get something out of the course if I got in."

Rob Phillips, the Fred and Nancy Morris Professor of Biophysics and Biology, and Dave Stevenson, the Marvin L. Goldberger Professor of Planetary Science, have taught the class since Tombrello's death in 2014. They set similarly enigmatic hurdles. Recently Phillips asked students to consider the logistical problems of bike sharing in Paris, as well as to figure out the likelihood of running into someone you know at a restaurant or airport. "What's cool about Physics 11—and why I feel passionate about it—is that we're challenging students by giving them things we don't know the answers to and not being so focused on making them into technicians, but teaching them how to ask questions, how to wonder," Phillips says.

The class gathers once a week for two hours, without a set agenda. Sometimes Phillips or Stevenson will email the entire class an interesting article or a particularly knotty problem. "We might talk about the science of the movie Interstellar," says Phillips, "or the physics of breaking waves. Or I might say, 'Hey, I saw this truck carrying avocados bouncing along the highway. I'm curious, by the time it gets to the store are the ones on the bottom likely to be damaged?'"

Sometimes the ideas come from the students. "We met once a week on the top floor of Sloan Annex, in the evenings," remembers Michael Woods (BS '08), now a Bay Area principal systems architect. "We would all bring our dinners from the Houses and sit on a trio of couches in front of a big whiteboard in the lounge. There was no syllabus, no midterm, and no final exam. Instead, there was only an expectation that we would have something to talk about on the whiteboard every week. It didn't matter exactly what it was, so long as it was interesting."

The push for evidence made an impression on Adam Jermyn (BS '15), currently a Marshall Fellow at the University of Cambridge. "You could argue any point in Physics 11, no matter how crazy, but you had better be ready to back it up," he says. "If there were any doubt at all, you would be sent up to the board to prove it. You had the freedom to be creative but knew that you had to think carefully if you wanted your idea to be taken seriously."

Jermyn also remembers how Tombrello would regale the class with tales of science history more personal than any you could find in a textbook. "Everyone was always referred to in the first person, so Professor Tombrello would talk about 'that time Carl was in town'—meaning Carl Sagan. As a freshman, this version of science was really important to hear, because it made it human, and something that I could see myself contributing to."

For all the sitting on couches and breaking bread together, the class has serious goals. As Tschirhart puts it, Phys 11 is meant to "train young scientists how to attack the kinds of difficult, poorly defined, open-ended problems often encountered in research." The class, he says, taught him how to deal with questions that appear intimidatingly complicated or impossible to solve precisely. "The process of breaking down complicated phenomena into constituent parts that you can understand individually is a skill that most people aren't very good at until they've had a lot of practice, and Phys 11 definitely helped me think this way."

The interdisciplinary nature of the course has an impact, too. "It is not and never was physics," notes Stevenson. Many of the students attracted to the course are interested in physics, he notes, but former students are spread wide, working in biology, biophysics, computer science, and on Wall Street.

"It exposed me to a broad range of ideas not as separate fields, but as just different aspects of the world," says Jermyn. "It really encouraged me to look for connections between fields, and to find places where methods in one could help me understand questions in another."

Phys 11 students, Phillips says, "have this playful and curious attitude that's really the basis of science." It also seems to be a basis for accomplishment: Phys 11 graduates have secured Hertz, National Science Foundation, and Marshall fellowships, as well as Goldwater scholarships and entrance to top graduate schools.

Is it fair to call the course a springboard to success? "I don't know how you would decide that," says Stevenson, "since I think these students are destined to excel anyway. But when you talk to them you see that this was a very significant experience for them, an important part of the Caltech experience. For the small subset of students who take this course, it's something very special." 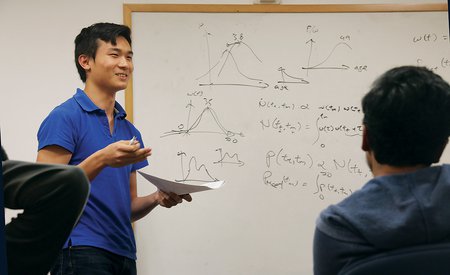 Daniel Mark '20 at the white board during a weekly meeting of Phys 11, the freshman seminar where thinking outside the box is the norm. Credit: Caltech
Image Lightbox 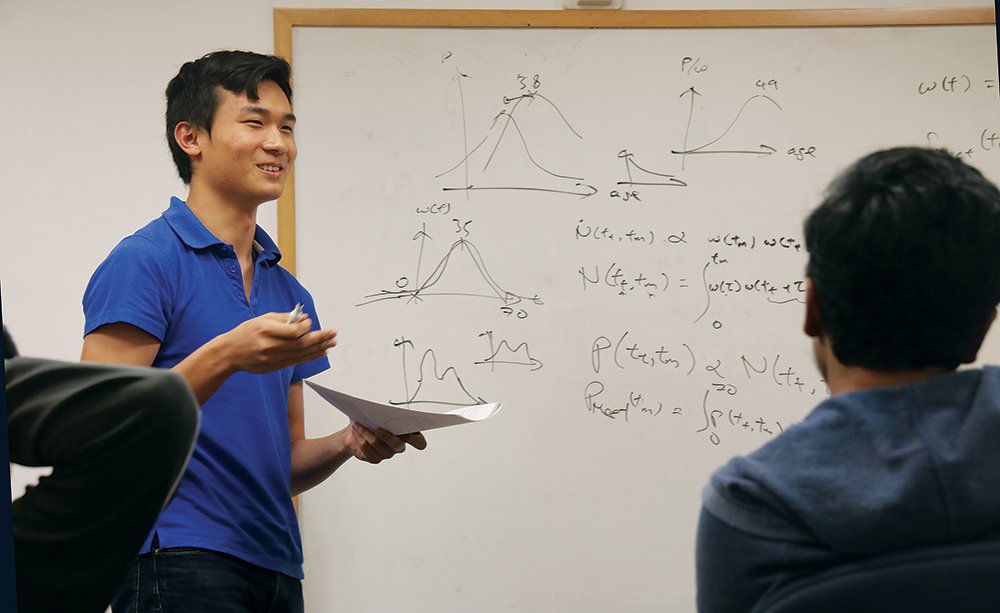 Daniel Mark '20 at the white board during a weekly meeting of Phys 11, the freshman seminar where thinking outside the box is the norm.
Credit: Caltech
Download Full Image
Subscribe
The Caltech Weekly