A new radio telescope array developed by a consortium led by Caltech and now operating at the Owens Valley Radio Observatory has the ability to image simultaneously the entire sky at radio wavelengths with unmatched speed, helping astronomers to search for objects and phenomena that pulse, flicker, flare, or explode.

The new tool, the Owens Valley Long Wavelength Array (OV-LWA), is already producing unprecedented videos of the radio sky. Astronomers hope that it will help them piece together a more complete picture of the early universe and learn about extrasolar space weather—the interaction between nearby stars and their orbiting planets.

"Our new telescope lets us see the entire sky all at once, and we can image everything instantaneously," says Gregg Hallinan, an assistant professor of astronomy at Caltech and OV-LWA's principal investigator.

Combining the observing power of more than 250 antennas spread out over a desert area equivalent to about 450 football fields, the OV-LWA is uniquely sensitive to faint variable radio signals such as those produced by pulsars, solar flares, and auroras on distant planets. A single radio antenna would have to be a hundred meters wide to achieve the same sensitivity (the giant radio telescope at Arecibo Observatory in Puerto Rico is 305 meters in diameter). However, a telescope's field of view is governed by the size of its dish, and such an enormous instrument still would only see a tiny fraction of the entire sky.

"Our technique delivers the best of both worlds, offering good sensitivity and an enormous field of view," says Hallinan.

Operating at full speed, the new array produces 25 terabytes of data every day, making it one of the most data-intensive telescopes in the world. For comparative purposes, it would take more than 5,000 DVDs to store just one day's worth of the array's data. A supercomputer developed by a group led by Lincoln Greenhill of Harvard University for the NSF-funded Large-Aperture Experiment to Detect the Dark Ages (LEDA) delivers these data. It uses graphics processing units similar to those used in modern computer games to combine signals from all of the antennas in real time. These combined signals are then sent to a second computer cluster, the All-Sky Transient Monitor (ASTM) at Caltech and JPL, which produces all-sky images in real-time.

Hallinan says that the OV-LWA holds great promise for cosmological studies and may allow astronomers to watch the early universe as it evolved over time. Scientists might then be able to learn how and when the universe's first stars, galaxies, and black holes formed. But the formative period during which these events occurred is shrouded in a fog of hydrogen that is opaque to most radiation. Even the most powerful optical and infrared telescopes cannot peer through that fog. By observing the sky at radio frequencies, however, astronomers may be able to detect weak radio signals from the time of the births of those first stars and galaxies.

"The biggest challenge is that this weak radiation from the early universe is obscured by the radio emission from our own galaxy, which is about a million times brighter than the signal itself, so you have to have very carefully measured data to see it," says Hallinan. "That's one of the primary goals of our collaboration—to try to get the first statistical measure of that weak signal from our cosmic dawn."

If they are able to detect that signal, the researchers could be able to learn about the formation of the first stars and galaxies, their evolution, and how they eventually ionized the surrounding intergalactic medium, to give us the universe we observe today. "This new field offers the opportunity to see the universe evolve, in a cosmological movie of sorts," Hallinan says.

But Hallinan is most excited about using the array to study space weather in nearby stellar systems similar to our own. Our own sun occasionally releases bursts of magnetic energy from its atmosphere, shooting X-rays and other forms of radiation outward in large flares. Sometimes these flares are accompanied by shock waves called coronal mass ejections, which send particles and magnetic fields toward Earth and the other planets. Light displays, or auroras, are produced when those particles interact with atoms in a planet's atmosphere. These space weather events also occur on other stars, and Hallinan hopes to use the OV-LWA to study them.

"We want to detect coronal mass ejections on other stars with our array and then use other telescopes to image them," he says. "We're trying to learn about this kind of event on stars other than the sun and show that there are auroras caused by these events on planets outside our solar system."

The majority of stars in our local corner of the Milky Way are so-called M dwarfs, stars that are much smaller than our own sun and yet potentially more magnetically active. Thus far, surveys of exoplanets suggest that most such M dwarfs harbor small rocky planets. "That means it is very likely that the nearest habitable planet is orbiting an M dwarf," Hallinan says. "However, the possibility of a higher degree of activity, with extreme flaring and intense coronal mass ejections, may have an impact on the atmosphere of such a planet and affect habitability."

A coronal mass ejection from an M dwarf would shower charged particles on the atmosphere and magnetic field of an orbiting planet, potentially leading to aurorae and periodic radio bursts. Astronomers could determine the strength of the planet's magnetic field by measuring the intensity and duration of such an event. And since magnetic fields may protect planets from the activity of their host stars, many such measurements would shed light on the potential habitability of these planets.

For decades, astronomers have been trying to detect radio bursts associated with extrasolar space weather. This is challenging for two reasons. First, the radio emission pulses as the planet rotates, flashing like a lighthouse beacon, so astronomers have to be looking at just the right time to catch the flash. Second, the radio emission may brighten significantly as the velocity of a star's stellar wind increases during a coronal mass ejection.

"You need to be observing at that exact moment when the beacon is pointed in our direction and the star's stellar wind has picked up. You might need to monitor that planet for a decade to get that one event where it is really bright," Hallinan says. "So you need to be able to not just observe at random intervals but to monitor all these planets continuously. Our new array allows us to do that." 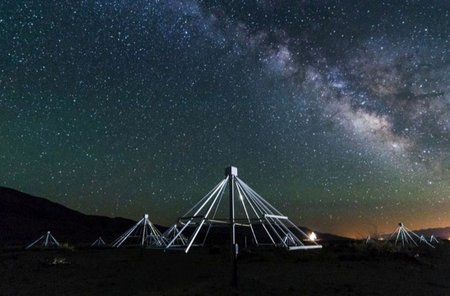 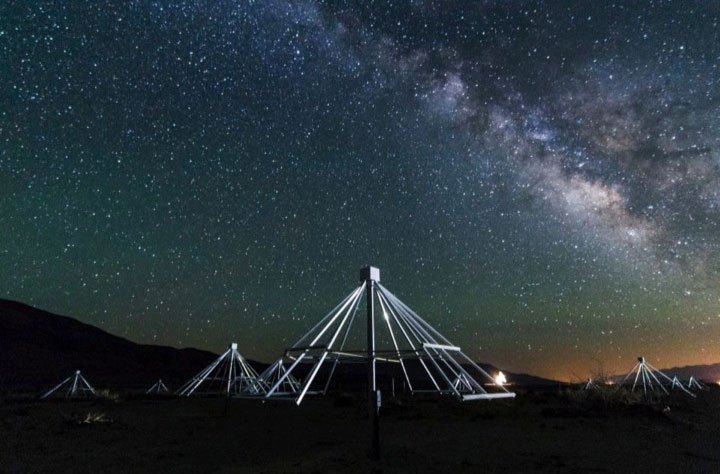 A night-time shot of some of the antennas of the OV-LWA with the center of our galaxy in the background.
Credit: Gregg Hallinan/Caltech
Download Full Image
Subscribe
The Caltech Weekly