A team of Caltech chemists has discovered a method for producing a group of silicon-containing organic chemicals without relying on expensive precious metal catalysts. Instead, the new technique uses as a catalyst a cheap, abundant chemical that is commonly found in chemistry labs around the world—potassium tert-butoxide—to help create a host of products ranging from new medicines to advanced materials. And it turns out that the potassium salt is more effective than state-of-the-art precious metal complexes at running very challenging chemical reactions.

"We have shown for the first time that you can efficiently make carbon–silicon bonds with a safe and inexpensive catalyst based on potassium rather than ultrarare precious metals like platinum, palladium, and iridium," says Anton Toutov, a graduate student working in the laboratory of Bob Grubbs, Caltech's Victor and Elizabeth Atkins Professor of Chemistry. "We're very excited because this new method is not only 'greener' and more efficient, but it is also thousands of times less expensive than what's currently out there for making useful chemical building blocks. This is a technology that the chemical industry could readily adopt."

The finding marks one of the first cases in which catalysis—the use of catalysts to make certain reactions occur faster, more readily, or at all—moves away from being a practice that is fundamentally unsustainable. While the precious metals in most catalysts are rare and could eventually run out, potassium is an abundant element on Earth.

The team describes its new "green" chemistry technique in the February 5 issue of the journal Nature. The lead authors on the paper are Toutov and Wen-bo (Boger) Liu, a postdoctoral scholar at Caltech. Toutov recently won the Dow Sustainability Innovation Student Challenge Award (SISCA) grand prize for this work, in a competition held at Caltech's Resnick Sustainability Institute.

"The first time I spoke about this at a conference, people were stunned," says Grubbs, corecipient of the 2005 Nobel Prize in Chemistry. "I added three slides about this chemistry to the end of my talk, and afterward it was all anyone wanted to talk about."

Coauthor Brian Stoltz, professor of chemistry at Caltech, says the reason for this strong response is that while the chemistry the catalyst drives is challenging, potassium tert-butoxide is so seemingly simple. The white, free-flowing powder—similar to common table salt in appearance—provides a straightforward and environmentally friendly way to run a reaction that involves replacing a carbon–hydrogen bond with a carbon–silicon bond to produce molecules known as organosilanes.

These organic molecules are of particular interest because they serve as powerful chemical building blocks for medicinal chemists to use in the creation of new pharmaceuticals. They also hold promise in the development of new materials for use in products such as LCD screens and organic solar cells, could be important in the development of new pesticides, and are being incorporated into novel medical imaging tools.

"To be able to do this type of reaction, which is one of the most-studied problems in the world of chemistry, with potassium tert-butoxide—a material that's not precious-metal based but still catalytically active—was a total shocker," Stoltz says.

The current project got its start a couple of years ago when coauthor Alexey Fedorov—then a postdoctoral scholar in the Grubbs lab (now at ETH Zürich)—was working on a completely different problem. He was trying to break carbon–oxygen bonds in biomass using simple silicon-containing compounds, metals, and potassium tert-butoxide, which is a common additive. During that process, he ran a control experiment—one without a metal catalyst—leaving only potassium tert-butoxide as the reagent. Remarkably, the reaction still worked. And when Toutov—who was working with Fedorov—analyzed the reaction further, he realized that in addition to the expected products, the reaction was making small amounts of organosilanes. This was unexpected since organosilanes are very challenging to produce.

"I thought that was impossible, so I went back and checked it many times," Toutov says. "Sure enough, it checked out!"

Bolstered by the finding, Toutov refined the reaction so that it would create only a single desired organosilane in high yield under mild conditions, with hydrogen gas as the only byproduct. Then he expanded the scope of the reaction to produce industrially useful chemicals such as molecules needed for new materials and derivatives of pharmaceutical substances.

Having demonstrated the broad applicability of the reaction, Toutov teamed up with Liu from Stoltz's group to further develop the chemistry for the synthesis of building blocks relevant to the preparation of new human medicines, a field in which Stoltz has been active for over a decade.

But before delving too deeply into additional applications, the chemists sought the assistance of Nathan Dalleska, director of the Environmental Analysis Center in the Ronald and Maxine Linde Center for Global Environmental Science at Caltech to perform one more test with a mass spectrometer that geologists use to detect extremely minute quantities of metals. They were trying to detect some tiny amount of those precious metals that could be contaminating their experiments—something that might explain why they were getting these seemingly impossible results from potassium tert-butoxide alone.

"But there was nothing there," says Stoltz. "We made our own potassium tert-butoxide and also bought it from various vendors, and yet the chemistry continued to work just the same. We had to really convince ourselves that it was true, that there were no precious metals in there. Eventually, we had to just decide to believe it."

So far, the chemists do not know why the simple catalyst is able to drive these complex reactions. But Stoltz's lab is part of the Center for Selective C–H Functionalization, a National Science Foundation–funded Center for Chemical Innovation that involves 23 research groups from around the country. Through that center, the Caltech team has started working with Ken Houk's computational chemistry group at UCLA to investigate how the chemistry works from a mechanistic standpoint.

"It's pretty clear that it's functioning by a mechanism that is totally different than the way a precious metal would behave," says Stoltz. "That's going to inspire some people, including ourselves hopefully, to think about how to use and harness that reactivity."

Toutov says that unlike some other catalysts that stop working or become sensitive to air or water when scaled up from the single-gram scale, this new catalyst seems to be robust enough to be used at large, industrial scales. To demonstrate the industrial viability of the process, the Caltech team used the method to synthesize nearly 150 grams of a valuable organosilane—the largest amount of this chemical product that has been produced by a single catalytic reaction. The reaction required no solvent, generated hydrogen gas as the only byproduct, and proceeded at 45°C—the lowest reported temperature at which this reaction has successfully run, to date.

"This discovery just shows how little we in fact know about chemistry," says Stoltz. "People constantly try to tell us how mature our field is, but there is so much fundamental chemistry that we still don't understand."

Kerry Betz, an undergraduate student at Caltech, is a coauthor on the paper, "Silylation of C–H bonds in aromatic heterocycles by an Earth-abundant metal catalyst." The work was supported by the National Science Foundation. The Resnick Sustainability Institute at Caltech, Dow Chemical, the Natural Sciences and Engineering Research Council of Canada, and the Shanghai Institute of Organic Chemistry provided graduate and postdoctoral support. Fedorov's work on the original reaction was supported by BP. 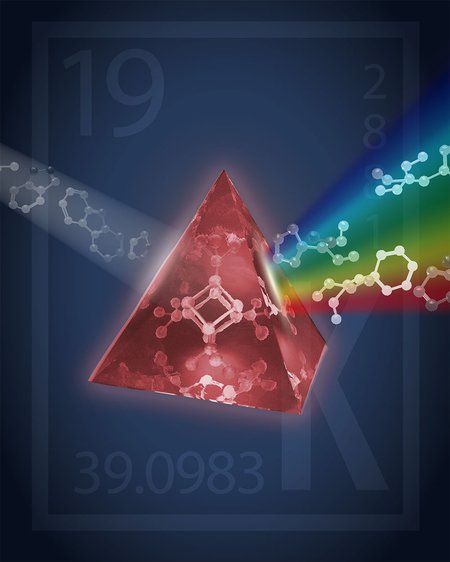 A crystal dispersing a beam of light serves as a metaphor for a striking, natural chemical process that is seemingly effortless, yet efficient and powerful. Here, potassium tert-butoxide—the catalyst in the new reaction—is represented within the prism. Simple, bulk organic molecules (depicted in the white light) pass through the prism and are transformed into complex building blocks that are useful in a variety of applications (represented in the color spectrum). Credit: Santiago Lombeyda and Robin Betz
Image Lightbox 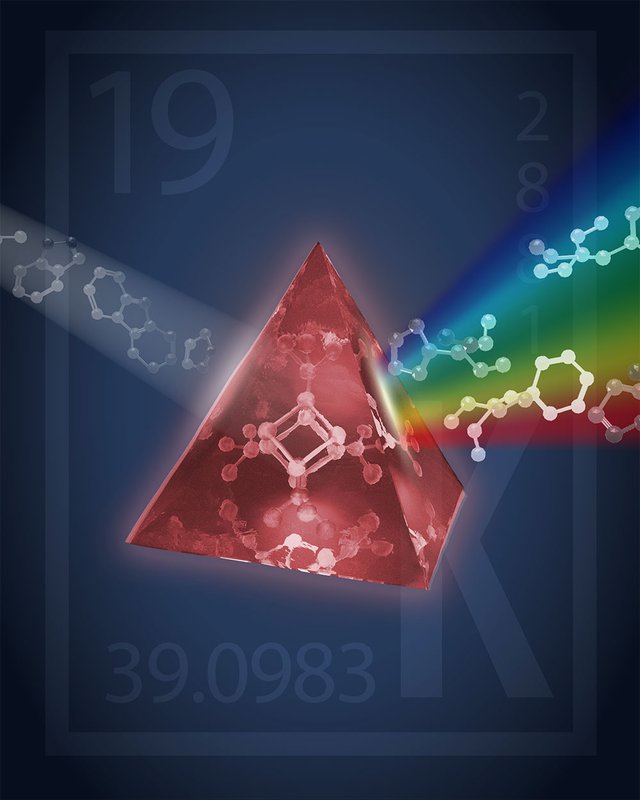 A crystal dispersing a beam of light serves as a metaphor for a striking, natural chemical process that is seemingly effortless, yet efficient and powerful. Here, potassium tert-butoxide—the catalyst in the new reaction—is represented within the prism. Simple, bulk organic molecules (depicted in the white light) pass through the prism and are transformed into complex building blocks that are useful in a variety of applications (represented in the color spectrum).
Credit: Santiago Lombeyda and Robin Betz
Download Full Image
Subscribe
The Caltech Weekly