You can always tell when two guys are about to get into a fight. It starts with angry stares, puffed-out chests, arms tossed out to the side, and little, aggressive starts forward. Neuroscientists call the combination of these physical movements "threat displays," and they are seen in countless organisms, from humans to tiny Drosophila fruit flies. Caltech researchers have now identified a small cluster of neurons in the male fly brain that governs this threatening behavior. Their work provides a starting point that may lead to greater understanding of threatening behaviors and aggression in humans.

"Threat displays are virtually universal in the animal kingdom but we have known virtually nothing about how they are controlled by the brain," says Anderson. "Human observers can tell the difference between threat behavior and contact aggression; the question is whether the brain also 'knows the difference'—meaning, whether there are separate brain centers controlling threat displays versus actual fighting, or whether threats versus contact aggression just reflect weaker versus stronger activation of some kind of generic aggression circuit. To use a radio analogy, is it just turning up the volume on the same station, or switching between different stations?"

For the first time, Duistermars and his colleagues were able to definitively characterize the elemental movements of a fly's threat display: rapid, short charges forward; continual reorientation toward the opponent; and wings thrown out to the side and upward to make the fly look larger. Using this quantitative description of threats, the team identified a small cluster of three neurons, called the threat module, which generates this complex threatening behavior.

Once they had identified this neural threat module, the researchers genetically modified the cluster of neurons to enable their artificial stimulation or silencing. Normally, flies exhibit a threat display only when they detect another male fly's pheromones and see that fly move. However, artificial activation of the threat module caused the flies to exhibit a threat display without any actual targets in their environment. The team found that a low amount of activation initiated the fly's quick charges and reorientation behaviors; a higher amount of activation added the wing movements.

"There are different intensities of aggression, from mild to wild threat displays, and from threats to actual physical violence," says Duistermars. "We want to know how animal nervous systems generate this kind of escalation in aggressive expressions."

The group found that stimulating the threat module was only sufficient to induce threats, but not to initiate a physical attack. But when the neurons were inhibited, the flies would progress straight to attacking without exhibiting any threats. This could imply that threat behaviors and attacking behaviors are controlled by separate neurons.

The next step for the team is to examine the rest of this so-called neural circuit: the neurons that are upstream and downstream of the threat module.

"Humans display threats in a manner similar to flies, so we might have a similar set of neurons in our own brains that generate these expressions," he adds. "This work is an important advance in understanding how animal brains coordinate complex social behaviors. In this sense, I really see the study of flies as continuous with the study of ourselves."

The paper is titled, "A brain module for scalable control of complex, multi-motor threat displays." In addition to Duistermars and Anderson, other co-authors are Caltech staff scientist Eric Hoopfer and Barret Pfeiffer of the Howard Hughes Medical Institute. Funding was provided by the Ellison Medical Foundation and the Howard Hughes Medical Institute. 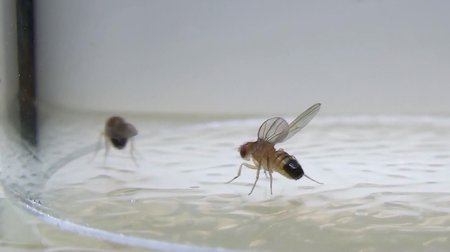 A fruit fly raising its wings in a threat display. Credit: Courtesy of the Anderson laboratory
Image Lightbox 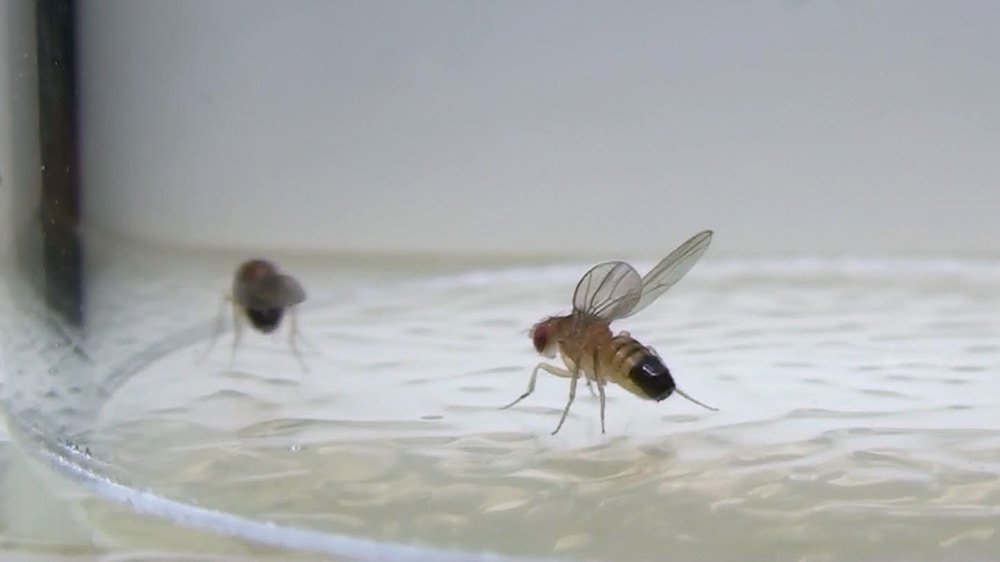 A fruit fly raising its wings in a threat display.
Credit: Courtesy of the Anderson laboratory
Download Full Image
Subscribe
The Caltech Weekly

Share this
Tags
biological science & medicine neuroscience and behavioral science
Related Links
> How Social Isolation Transforms the Brain   > Nature or Nurture? Innate Social Behaviors in the Mouse Brain   > Emotions in the Brain: An Interview with David Anderson
See All News   >