Lamprey are slimy, parasitic eel-like fish, one of only two existing species of vertebrates that have no jaw. While many would be repulsed by these creatures, lamprey are exciting to biologists because they are so primitive, retaining many characteristics similar to their ancient ancestors and thus offering answers to some of life's biggest evolutionary questions. Now, by studying the lamprey, Caltech researchers have discovered an unexpected mechanism for the evolution of the neurons of the peripheral nervous system—nerves outside of the brain and spinal cord.

The work was done in the laboratory of Marianne Bronner, the Albert Billings Ruddock Professor of Biology at Caltech, and appears in a paper in the March 20 online issue of Nature.

For over a decade, the Bronner group has studied lamprey because of the unique insights they offer into the evolution of vertebrates, and particularly the evolution of new structures like jaws. Her laboratory at Caltech maintains one of the very few laboratory populations of lamprey in the world.

Bronner was especially interested in how the lamprey compares with other vertebrates in the evolution of its gut neurons. These neurons control the movement of muscles for digestion and manage other aspects of gut physiology, such as secretion and water balance.

"We were interested in the origins of lamprey gut neurons because in other vertebrates they arise from a particular embryonic cell type, called neural crest cells," says Stephen Green, postdoctoral scholar in biology and biological engineering and co-first author on the paper. "We knew that lamprey have many kinds of neural crest cells, but we knew little about which cells give rise to gut neurons."

Neural crest cells are a type of stem cell; during vertebrate embryonic development, they eventually differentiate into specialized cells such as those that make facial skeleton cells or those that create pigment cells. In particular, a population called vagal neural crest cells are known to become the gut neurons. But Bronner and her team noticed that while mature lamprey have gut neurons like other vertebrates, lamprey embryos lack these vagal cells.

"Adult lamprey have gut neurons, but we were unable to find the vagal precursor cells," says Bronner. "So, where do the gut neurons come from?"

To find out, the team drew inspiration from studies of mice that, due to a mutation, lack vagal neural crest cells. The mice do, however, have a small number of gut neurons from an unexpected source—cells called Schwann cell precursors (SCPs). SCPs exist along nerves that run from the spine to various parts of the body. These cells are known to develop into Schwann cells, which form a protective barrier around the nerves.

Bronner and her team fluorescently tagged these cells in lamprey embryos and found that, during development, the cells migrated from the spine toward the gut. Sure enough, some of these SCPs developed into gut neurons.

"Our findings suggest that gut neurons in ancient vertebrates may have come predominantly from SCPs, and that these original gut neurons were later outnumbered by neurons that arose from vagal neural crest cells," says Green. "Lamprey have relatively simple guts, with no looping and few total neurons. We speculate that vagal neural crest cells might be essential for the more complicated guts of higher vertebrates like mice and humans."

The paper is titled "Ancient evolutionary origin of vertebrate enteric neurons from trunk-derived neural crest." Former graduate student Benjamin Uy (PhD '16) is a co-first author. The work was funded by the National Institutes of Health.

A side view of the lamprey gut, showing many large serotonergic neurons (green) sitting on the side of the gut. These gut neurons are matured and developed. Credit: Courtesy of the Bronner laboratory 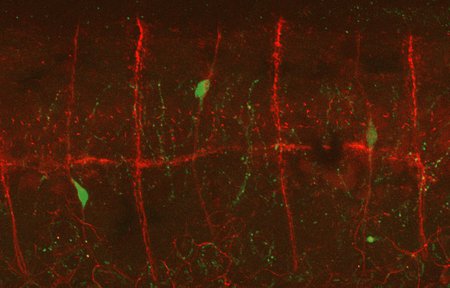 Embryonic nerve cells (green) journey across spinal nerves (red) to reach the gut. These neural precursor cells will develop into neurons when they reach the gut. Credit: Courtesy of the Bronner laboratory
Image Gallery Lightbox

A side view of the lamprey gut, showing many large serotonergic neurons (green) sitting on the side of the gut. These gut neurons are matured and developed.
Credit: Courtesy of the Bronner laboratory
Download Full Image 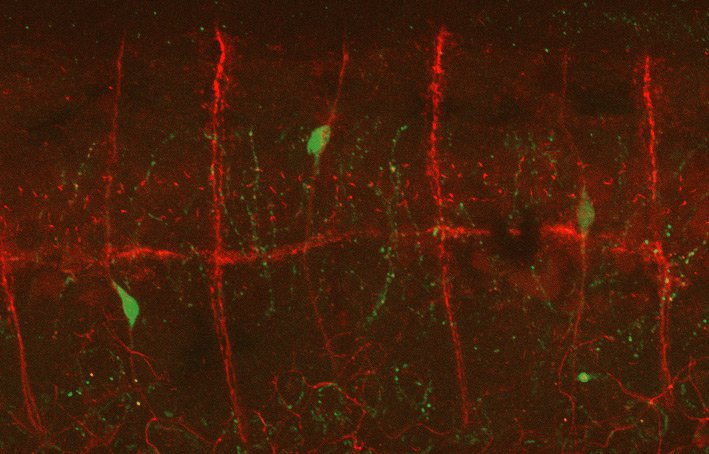 Embryonic nerve cells (green) journey across spinal nerves (red) to reach the gut. These neural precursor cells will develop into neurons when they reach the gut.
Credit: Courtesy of the Bronner laboratory
Download Full Image