For the first time, scientists at Caltech have induced natural sensations in the arm of a paralyzed man by stimulating a certain region of the brain with a tiny array of electrodes. The patient has a high-level spinal cord lesion and, besides not being able to move his limbs, also cannot feel them. The work could one day allow paralyzed people using prosthetic limbs to feel physical feedback from sensors placed on these devices.

The somatosensory cortex is a strip of brain that governs bodily sensations, both proprioceptive sensations (sensations of movement or the body's position in space) and cutaneous sensations (those of pressure, vibration, touch, and the like). Previous to the new work, neural implants targeting similar brain areas predominantly produced sensations such as tingling or buzzing in the hand. The Andersen lab's implant is able to produce much more natural sensation via intracortical stimulation, akin to sensations experienced by the patient prior to his injury.

The patient had become paralyzed from the shoulders down three years ago after a spinal cord injury. Two arrays of tiny electrodes were surgically inserted into his somatosensory cortex at Keck Hospital of USC, and the human studies were conducted at Rancho Los Amigos National Rehabilitation Center. Using the arrays, the researchers stimulated neurons in the region with very small pulses of electricity. The participantreported feeling different natural sensations—such as squeezing, tapping, a sense of upward motion, and several others—that would vary in type, intensity, and location depending on the frequency, amplitude, and location of stimulation from the arrays. It is the first time such natural sensations have been induced by intracortical neural stimulation.

"It was quite interesting," the study participant says of the sensations. "It was a lot of pinching, squeezing, movements, things like that. Hopefully it helps somebody in the future."

Though different types of stimulation did indeed induce varying sensations, the neural codes governing specific physical sensations are still unclear. In future work, the researchers hope to determine the precise ways to place the electrodes and stimulate somatosensory brain areas in order to induce specific feelings and create a kind of dictionary of stimulations and their corresponding sensations.

The next major step, according to Andersen, is to integrate the technology with existing neural prosthetics. In 2015, Andersen's laboratory developed brain-machine interfaces (BMIs) to connect a prosthetic robotic arm to electrodes implanted in the region of the brain that governs intentions. In this way, a paralyzed man was able to utilize the prosthetic arm to reach out, grasp a cup, and bring it to his mouth to take a drink. Connecting the device with the somatosensory cortex would create bidirectional BMIs that would enable a paralyzed person to feel again, while using prosthetic limbs.

"Currently the only feedback that is available for neural prosthetics is visual, meaning that participants can watch the brain-controlled operation of robotic limbs to make corrections," says Andersen. "However, once an object is grasped, it is essential to also have somatosensory information to dexterously manipulate the object. Stimulation-induced somatosensory sensations have the potential added advantage of producing a sense of embodiment; for example, a participant may feel over time that the robotic limb is a part of their body."

"Working with neurologically injured patients clinically, we know that limbs without sensation are far less useful, and the same concepts apply to neuroprosthetic devices," says Charles Liu, director of the USC Neurorestoration Center and professor of clinical neurological surgery and neurology. "The ability to restore natural sensations represents an exceptionally important step in our goal of one day achieving comprehensive restoration of neurological function in human patients with neurological injuries."

The study is titled "Proprioceptive and Cutaneous Sensations in Humans Elicited by Intracortical Microstimulation." First authors on the paper are postdoctoral scholars Michelle Armenta Salas and Luke Bashford, and scientific researcher Spencer Kellis. Other Caltech co-authors are graduate students Matiar Jafari and HyeongChan Jo, and laboratory manager Kelsie Pejsa. Additional co-authors are Daniel Kramer and Brian Lee of USC; and Kathleen Shanfield of the Rancho Los Amigos National Rehabilitation Center. Funding was provided by the U.S. Department of Health and Human Services, the National Institutes of Health, the National Institute of Neurological Disorders and Stroke, the Tianqiao and Chrissy Chen Brain-Machine Interface Center, the Della Martin Foundation, the Boswell Foundation, the National Science Foundation, and the David Geffen Medical Scholarship.

Richard Andersen is an affiliated faculty member of the Tianqiao and Chrissy Chen Institute for Neuroscience at Caltech. 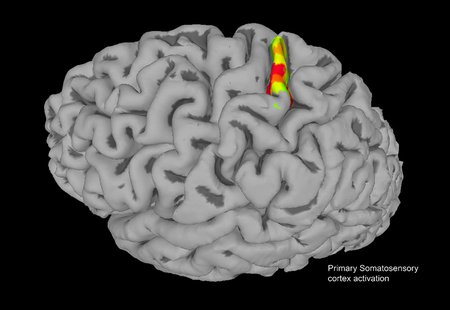 fMRI is used to highlight select implant sites in the somatosensory cortex. Electrodes implanted in this region were able to stimulate neurons that produced physical sensations, like a squeeze or tap, in the arm of a paralyzed man. Credit: Courtesy of the Andersen laboratory
Image Lightbox 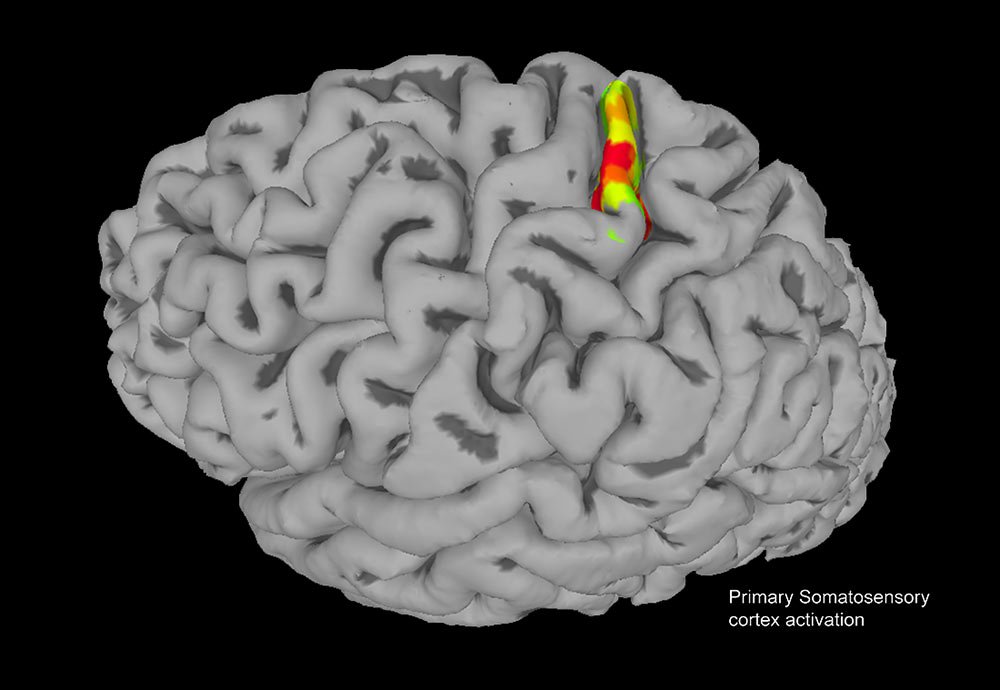 fMRI is used to highlight select implant sites in the somatosensory cortex. Electrodes implanted in this region were able to stimulate neurons that produced physical sensations, like a squeeze or tap, in the arm of a paralyzed man.
Credit: Courtesy of the Andersen laboratory
Download Full Image
Subscribe
The Caltech Weekly