Since 2019, SpaceX has been launching an increasing number of internet satellites into orbit around Earth. The satellite constellation, called Starlink, now includes nearly 1,800 members orbiting at altitudes of about 550 kilometers. Astronomers have expressed concerns that that these objects, which can appear as streaks in telescope images, could hamper their scientific observations.

To quantify these effects, a team of researchers studied archival images captured by the National Science Foundation (NSF)-funded Zwicky Transient Facility (ZTF), an instrument that operates from Caltech's Palomar Observatory near San Diego. ZTF scans the entire night sky every two days, cataloguing cosmic objects that explode, blink, or otherwise change over time. This includes everything from supernovae to near-Earth asteroids. The Zwicky team members say they decided to specifically study the effects of Starlink satellites because they currently represent the largest low-Earth orbit, or LEO, constellation, and they have well-characterized orbits.

The findings, reported in the January 17 issue of The Astrophysical Journal Letters, shows 5,301 satellite streaks appear in archival images taken between November 2019 and September 2021. The streaks are most apparent in so-called twilight observations, those taken at dawn or dusk, which are important for finding near-Earth asteroids that appear close to the sun in the sky. ZTF has discovered several asteroids of this nature, including 2020 AV2, the first asteroid spotted with an orbit that fits entirely within the orbit of Venus.

"In 2019, 0.5 percent of twilight images were affected, and now almost 20 percent are affected," says Przemek Mróz, study lead author and a former Caltech postdoctoral scholar who is now at the University of Warsaw in Poland.

In the future, the scientists expect that nearly all of the ZTF images taken during twilight will contain at least one streak, especially after the Starlink constellation reaches 10,000 satellites, a goal SpaceX hopes to reach by 2027.

"We don't expect Starlink satellites to affect non-twilight images, but if the satellite constellation of other companies goes into higher orbits, this could cause problems for non-twilight observations," Mróz says.

Yet despite the increase in image streaks, the new report notes that ZTF science operations have not been strongly affected. Study co-author Tom Prince, the Ira S. Bowen Professor of Physics, Emeritus, at Caltech, says the paper shows a single streak affects less than one-tenth of a percent of the pixels in a ZTF image.

"There is a small chance that we would miss an asteroid or another event hidden behind a satellite streak, but compared to the impact of weather, such as a cloudy sky, these are rather small effects for ZTF."

Prince says that software can be developed to help mitigate potential problems; for example, software could predict the locations of the Starlink satellites and thus help astronomers avoid scheduling an observation when one might be in the field of view. Software can also assess whether a passing satellite may have affected an astronomical observation, which would allow astronomers to mask or otherwise reduce the negative effects of the streaks.

The new study also looked at the effectiveness of visors on the Starlink satellites, which SpaceX added beginning in 2020 to block sunlight from reaching the spacecraft. According to the ZTF observations, the visors reduce the satellite brightness by a factor of about five. That dims the satellites down to an apparent brightness level of 6.8 magnitude (the brightest stars are first magnitude, and the faintest stars we can see with our eyes are about sixth magnitude).

This is still not dim enough to meet standards outlined by the Satellite Constellations 1 (SATCON1) workshop in 2020, a gathering sponsored by the NOIRLab (National Optical-Infrared Astronomy Research Laboratory) and the AAS (American Astronomical Society) to bring together astronomers, policymakers, and other experts to discuss the impact of large satellite constellations on astronomy and society. The group called for all LEO satellites to be at seventh magnitude or fainter.

The study authors also note their study is specific to ZTF. Like ZTF, the upcoming Vera C. Rubin Observatory, under construction in Chile, will also survey the sky nightly, but due to its more sensitive imager, astronomers predict that it may be more negatively affected by satellite streaks than ZTF.

ZTF is funded by NSF and an international collaboration of partners. Additional support comes from the Heising-Simons Foundation and Caltech. ZTF data are processed and archived by Caltech's IPAC astronomy center. NASA supports ZTF's search for near-Earth objects through the Near-Earth Object Observations program.

The streak from a Starlink satellite appears in this image of the Andromeda galaxy, taken by the Zwicky Transient Facility, or ZTF, during twilight on May 19, 2021. The image shows only one-sixteenth of ZTF's full field of view. 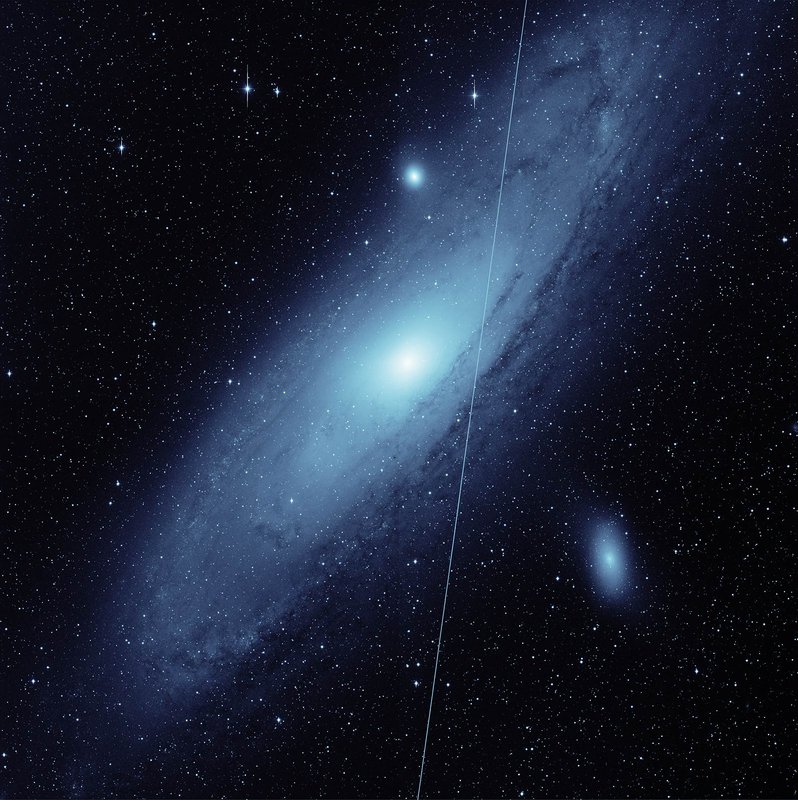 The streak from a Starlink satellite appears in this image of the Andromeda galaxy, taken by the Zwicky Transient Facility, or ZTF, during twilight on May 19, 2021. The image shows only one-sixteenth of ZTF's full field of view.
Credit: Caltech Optical Observatories/IPAC
Download Full Image