It's a science fiction staple: human astronauts visiting an alien world find a derelict spacecraft sent there . . . by themselves. It has actually happened—once—in real life. On November 19, 1969, the Apollo 12 Lunar Excursion Module (LEM) touched down on the vast plains of the Oceanus Procellarum, or Ocean of Storms, less than 200 yards from the Surveyor 3 probe, which Caltech's Jet Propulsion Laboratory had sent to the moon two and a half years earlier. On November 20, after a day spent collecting rock samples, astronauts Charles Conrad and Alan Bean retrieved some parts from Surveyor as well, bringing them back to NASA engineers eager to learn what long-term exposure would do to electronic cabling and other delicate components. Among their souvenirs was the metal scoop that Caltech soils engineer Ronald Scott had used to verify that a moon landing could be made in the first place.

In 1960, when President Kennedy had announced his intention to put a man on the moon, almost the only thing we knew for sure about the lunar surface was that it wasn't made of green cheese. It was entirely reasonable to suppose that the moon's dark "seas" were in fact oceans of dust pulverized by eons of relentless meteor bombardment. Was the dust a few inches deep? Or was it bottomless, waiting to swallow up and drown the man with the temerity to take one small step on it?

JPL sent a series of robotic explorers to find out. The preliminary designs for the Surveyors, drawn up in 1960, included an onboard soil analyzer. Weight constraints led to its removal a year or so later, but by then, the soil scoop—roughly the size and shape of a clenched fist, with a one-by-two-inch trapdoor on its underside—and its retractable arm had already been built.

In 1963, Scott, then an associate professor of civil engineering at Caltech, proposed that the scoop and arm be reinstated as a soil-mechanics experiment. By outfitting the arm with strain gauges, he could measure the force exerted when the scoop's flat bottom was pressed into the soil and calculate the load it could bear. Simply landing the Surveyor was insufficient evidence of the soil's stability; JPL's robotic emissary weighed a measly 650 pounds, but the LEM would be more than 16 tons of hardware, fuel, and humanity.

Problem was, with the soil lab gone, the arm's mounting hardware had been eliminated as well. But Scott was persistent, and in the summer of 1966, JPL engineers found a work-around: the arm could replace the downward-looking approach camera. However, the arm's connections would have to be rebuilt to fit the camera mount, and Surveyor 3's April 1967 launch date was coming up fast. There wasn't enough time to build the strain gauges as well, but Scott had a Plan B—he would measure the current drawn by the arm's motors, and thus derive the force they were exerting.

Surveyor 3's time on the moon got off to a bumpy start. Literally. The small thrusters used to slow the final descent failed to shut off, and the lander bounded skyward again a moment after touchdown, soaring to a height of 35 feet and becoming the first spacecraft ever to depart (albeit unintentionally) from the moon. The thrusters were finally shut down from Earth on the second bounce, and Surveyor came to rest on the gently sloping wall of the small, shallow crater that now bears its name.

As principal investigator for the Soil Mechanics Surface Sampler—as it was known in NASA-speak—Scott shared a desk in the Space Flight Operations Facility (JPL's version of Mission Control) with his JPL counterpart, Floyd Roberson. The arm responded to Roberson's commands, but Plan B quickly went awry. "The condition of the spacecraft telemetry prevented making measurements of the motor currents," as Scott explained in the June 1967 issue of Caltech's Engineering & Science magazine. Now their only source of data was Surveyor's TV camera, which fortunately was mounted on the same side of the lander's triangular body.

On to Plan C: They would let the scoop rest on the surface and then drive it into the soil until the motors stalled to see how deeply it would penetrate. As each new frame from the camera appeared on the control-room monitors, someone snapped a Polaroid. After measuring the scoop's movement between frames, Roberson would write down the commands for the scoop's next move—backwards, as the camera took pictures through a swiveling mirror—and hand them to the man at the next console, who double-checked them and passed them to the controller, who typed them in. The humans worked faster than the camera did, so they were essentially moving the arm in real time.

Scott and Roberson poked at the soil, dug trenches, tried to pick up pebbles, and generally carried on like kids at the beach for the rest of the day—the lunar day, that is, or two weeks on Earth. "The lunar soil is fine-grained material . . . similar to a dry terrestrial sand," Scott wrote in E&S, and it got denser as they dug. "The deepest trench was approximately seven inches, and the material at that depth was relatively firm compared to the surface." And with that, all systems were "go" for Apollo, at least as far as the soil was concerned.

When the sun finally set on Surveyor on May 3, Scott wrote in a later E&S article in 1970, "For no particular reason that I can recall, we tidily raised the surface sampler as high as it would go and moved it to the extreme right." Surveyor quietly froze to death in the cold lunar night, and Scott went back to his day job—which included being a member of the Apollo Soil Mechanics Team.

Scott was at Mission Control in Houston on July 20, 1969, when Neil Armstrong landed the Eagle in the ultimate check of Scott's math. He was there again on November 20, listening in as Apollo 12's Charles Conrad and Alan Bean "made their way to Surveyor and began poking around." He was astonished, he recalled in E&S, when "Conrad remarked casually that he had got the scoop." This was not in the plan: the astronauts' wire cutters were no match for the steel tape that retracted the arm. But, Conrad later told Scott, he'd put the cutters to the tape and given it an experimental twist. "To his surprise," Scott wrote, "the tape parted at a weld. All he needed to do to free the scoop was to snip through three aluminum supporting arms and some wires behind the first joint," which was possible only because "we had fortuitously left the sampler in its most elevated position. Astronauts in space suits cannot at present bend down."

Several weeks later, Scott returned to Houston, this time to the Lunar Receiving Laboratory to witness the opening of the "murky Teflon" double bag in which the scoop had been sealed. He and Roberson had emptied the scoop more than two years earlier, as part of their tidying up at the end of their lunar digging, but some moondust and a little grit had clung to it and made it back to Earth anyway. "If I had known I was going to see it again," he wrote, "I would have left the scoop completely packed with lunar soil."

Scott went on to design the soil scoop for NASA's Viking landers, which searched for life on Mars in the 1970s. He died in 2005, but Associate Professor of Civil and Mechanical Engineering José Andrade has picked up the shovel, as it were. Andrade is on an advisory panel for JPL's InSight mission to Mars, slated to launch in 2016. InSight's instruments include a heat-flow probe that will hammer itself some 10 to 15 feet into the martian soil. Scott would be pleased. 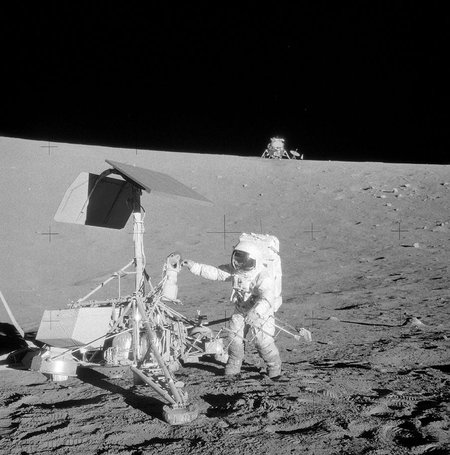 Astronaut Charles Conrad reaches for Surveyor's TV camera. The soil scoop and its fully extended arm can be seen in front of him, and Apollo 12's Lunar Excursion Module sits on the crater rim in the background. Credit: Alan Bean/NASA 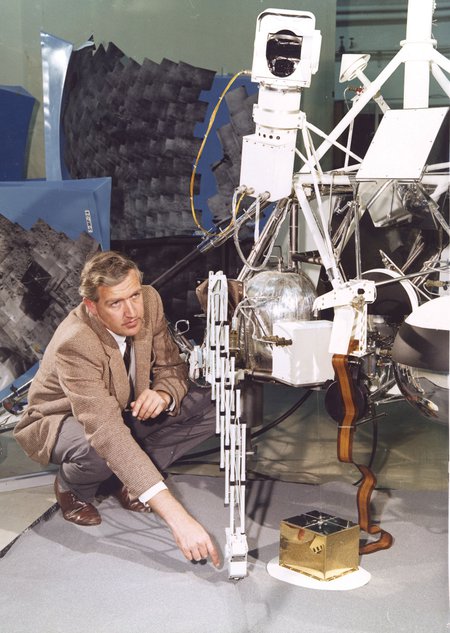 Many boys dream of being a backhoe operator when they grow up, but Caltech engineer Ronald Scott achieved the ultimate: he was the first person to dig on the moon. Here he poses with Surveyor 3 and its soil scoop shortly before its 1967 launch. Credit: Pamela Scott
Image Gallery Lightbox 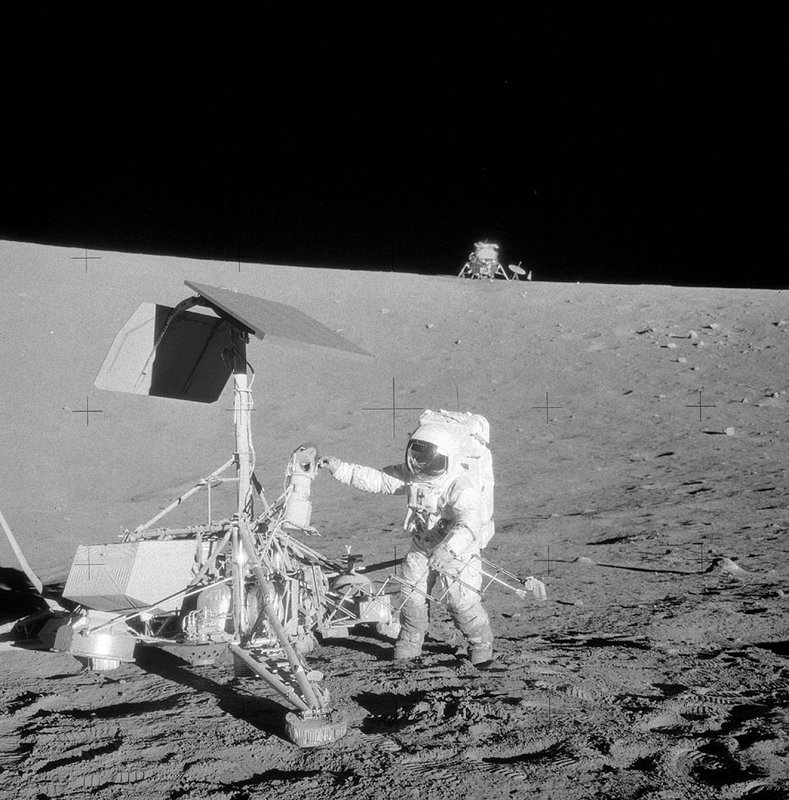 Astronaut Charles Conrad reaches for Surveyor's TV camera. The soil scoop and its fully extended arm can be seen in front of him, and Apollo 12's Lunar Excursion Module sits on the crater rim in the background.
Credit: Alan Bean/NASA
Download Full Image 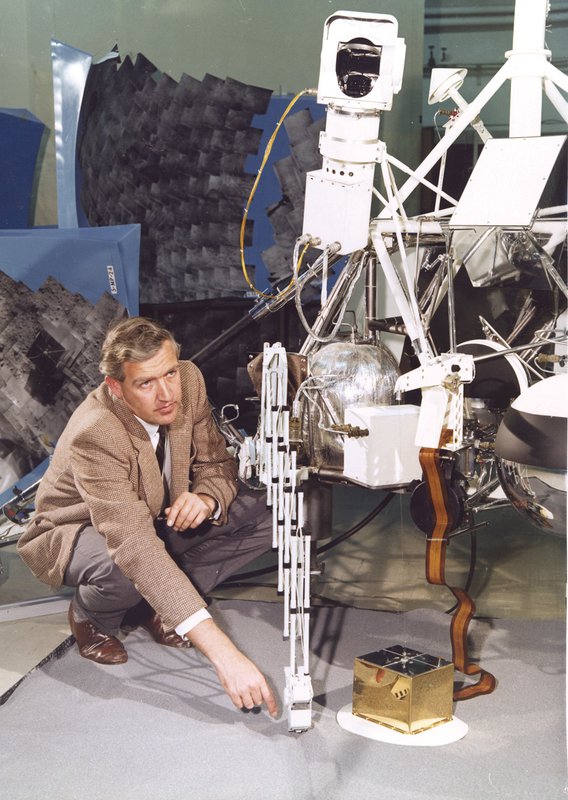 Many boys dream of being a backhoe operator when they grow up, but Caltech engineer Ronald Scott achieved the ultimate: he was the first person to dig on the moon. Here he poses with Surveyor 3 and its soil scoop shortly before its 1967 launch.
Credit: Pamela Scott
Download Full Image

Share this
Tags
earth & planetary science engineering Institute affairs
Related Links
> Digging on the Moon   > On Meeting an Old Friend, Slightly the Worse for Wear, After a Lapse of Two and a Half Years   > Ron Scott, 1929–2005
See All News   >