A New Tool for Unscrambling the Rock Record

A lot can happen to a rock over the course of two and a half billion years. It can get buried and heated; fluids remove some of its minerals and precipitate others; its chemistry changes. So if you want to use that rock to learn about the conditions on the early Earth, you have to do some geologic sleuthing: You have to figure out which parts of the rock are original and which came later. That is a tricky task, but now a team of Caltech researchers has developed and applied a unique technique that removes much of the guesswork.

"We want to know what Earth looked like when these ancient rocks were deposited. That's a giant challenge because a number of processes have scrambled and erased the original history," says Woodward Fischer, an assistant professor of geobiology at Caltech. "This is a first big effort to try to wrestle with that."

Fischer is the lead author on a paper that describes the new technique and findings in the current issue of the Proceedings of the National Academy of Sciences.

Using the new method, Fischer and his colleagues have examined ancient rocks dating to an age before the rise of oxygen. Today, water feeds the biosphere, providing the electrons needed to support life. But before the evolution of photosynthesis and the accumulation of oxygen in the atmosphere, elements such as iron and sulfur were the source of electrons. Researchers interested in the early Earth would like to determine how and when life figured out how to use these elements. The Caltech team has identified clear evidence that 2.5 billion years ago, sulfate-reducing microbes were already at work.

The researchers studied drill core samples collected in South Africa from sedimentary rocks that are slightly older than 2.5 billion years old. They focused on small features within the rocks, called nodules, made of the mineral pyrite. Also known as fool's gold, pyrite can be made in a number of ways, including as a product of respiratory metabolism: sulfate-reducing microbes reduce sulfate, which is present in seawater, yielding hydrogen sulfide, and when that hydrogen sulfide mingles with iron, pyrite is produced.

Today, sulfate-reducing microbes are often found in anoxic environments such as marine sediments where the oxygen has been consumed by aerobes but where there is still plenty of organic matter. It is logical, then, to suspect that these microbes would have been important players on the early Earth, when oxygen was scarce. Comparative genomics studies of sulfate reducers that are living today also suggest that these microbes should have been present 2.5 billion years ago. But this has been difficult to confirm in the rock record.

From current studies, scientists know that sulfate reducers metabolize the various stable isotopes of sulfur in a predictable way: producing light sulfur isotopes first before moving on to produce heavier ones as they run out of substrate. This provides a chemical thumbprint that researchers can look for as they examine pyrite nodules. The nodules crystalize early within the sediments, with the material at their core forming before the material at their edges. Therefore, to check whether sulfur-reducing organisms were active when a particular pyrite-containing rock formed, a geobiologist should be able to measure the ratios of a nodule's sulfur isotopes at different points—both near the core and closer to the edges—to see how those ratios changed as the nodule grew. But the nodules are only about a millimeter in diameter, so researchers have not been able to collect the fine-grained measurements they need in order to identify the isotopic thumbprint. Instead, they often grind up an entire rock sample, measure its isotopic composition, and then compare it to another rock.

Muddying the interpretation even more, these ancient rocks have all been deeply complicated by the wrinkles of time. All of the events and circumstances that have affected them since their deposition have left their chemical marks, by carving away old materials and precipitating new ones. A geologist can use some of the textures—the marks left in the fabric of the rock—to unravel some of a rock's history, but only if those textures clearly crosscut or overlap one another. Some of the visual cues can also be misleading. So it can be difficult just to identify which parts of a rock are original and can therefore provide insight about the early Earth.

Fischer's new technique changes all that. It allows researchers to untangle a rock's history and to then zoom in and measure the isotopic ratios at a number of points within a single pyrite nodule.

He begins as any geologist would—by looking at a sample with light and electron microscopy to identify the different textures within the rock. Doing that, he might identify a number of pyrite nodules that "look good"—that appear to date to the rock's original deposition.

He then uses a technique called scanning SQUID (superconducting quantum interference device) microscopy, which uses a quantum detector to produce a magnetic map of the sample at a very small scale. Pyrite itself is not magnetic, but when it is later altered, it forms a mineral called pyrrhotite, which is magnetic. Using scanning SQUID microscopy, Fischer has been able to rule out a number of nodules that had appeared to be original but that were in fact magnetic, meaning that they included pyrrhotite. In his South African samples, those deceptive features dated to a volcanic event 500 million years after the rocks were deposited, which sent chemistry-altering fluids through all the layers of sediment and rock that were present at the time.

"If you weren't using this technique, you'd miss the later alteration," Fischer says. "Those textures looked good. They would have passed naive tests."

The final step in the process is to measure the isotopic composition of the nodules using an analytical method called secondary ion mass spectrometry (SIMS). This specialized technique is used to measure the chemistry of thin films and solids with very fine spatial resolution. Materials scientists use it to analyze silicon wafers, for example, and planetary scientists have used it to study bits of rock from the moon. Fischer's group is one of the few in the world that uses it to study ancient rocks.

In SIMS, a sample under very strong vacuum is bombarded with a beam of cesium ions, which displaces ions from the surface of the sample. A mass spectrometer can measure those so-called secondary ions, providing a count of the sample's sulfur isotopes. Since the beam can be focused very precisely, the method allows researchers to sample many points within a single nodule, measuring a 13 x 5 grid within a millimeter, for example. The product is essentially a map of the sample's isotopic composition.

"It's one thing to say, 'Wow, rocks are really complicated. There's just going to be information lost.' It's another thing to be able to go back in and say, 'I know how to piece together the history of this rock and learn something about the early Earth that I didn't know previously.'"

Using the new technique, Fischer and his colleagues were able to identify which parts of their drill core samples were truly ancient and to then measure the sulfur isotopic composition of those nodules as they grew. And indeed they found the isotopic signature expected as a result of the activity of sulfur-reducing microbes.

"This work supports the hypothesis that microbial sulfate reduction was an important metabolism in organic-rich environments on the early Earth," Fischer says. "What's more, we now know how we can ask better questions about ancient rocks. That, for me, is incredibly exciting."

The paper is titled "SQUID-SIMS is a useful approach to uncover primary signals in the Archean sulfur cycle." Along with Fischer, additional Caltech coauthors are John Eiler, the Robert P. Sharp Professor of Geology and professor of geochemistry; Joseph Kirschvink, the Nico and Marilyn Van Wingen Professor of Geobiology; Jena Johnson, a graduate student in geobiology; and Yunbin Guan, director of the Center for Microanalysis. David Fike of Washington University in St. Louis and Timothy Raub of the University of St. Andrews are also coauthors. Scanning SQUID microscopy is a technique that was developed by researchers at Caltech and Vanderbilt University. The work was supported by the Agouron Institute and by a NASA Exobiology Award. 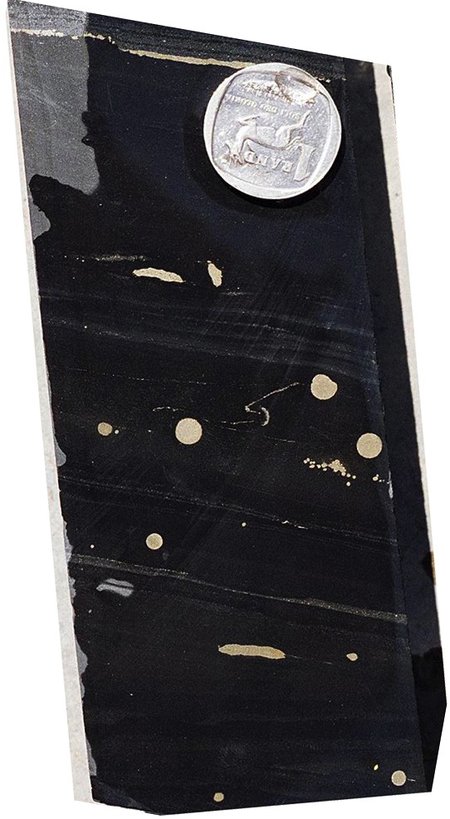 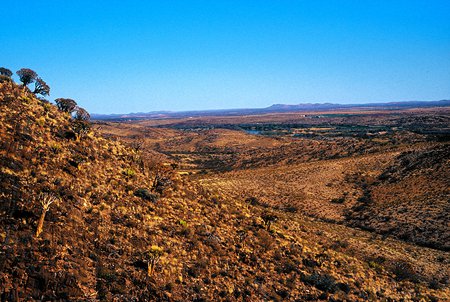 2.55-billion-year-old strata outcropping along the Orange River in South Africa, near where the core sampled in this study was drilled. Credit: W. Fischer/Caltech
Image Gallery Lightbox 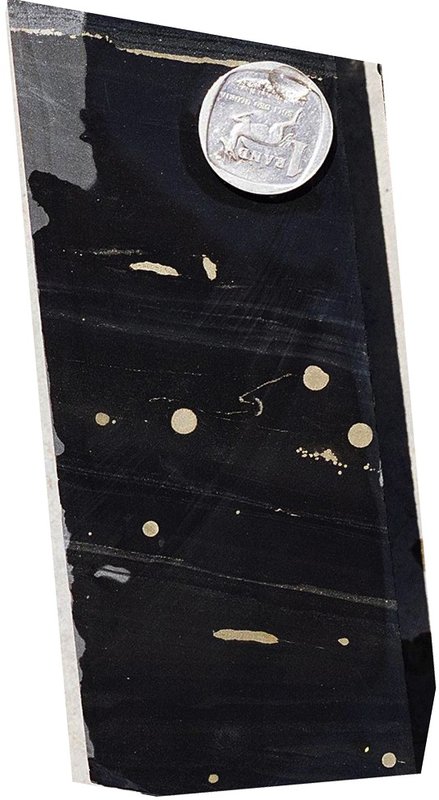 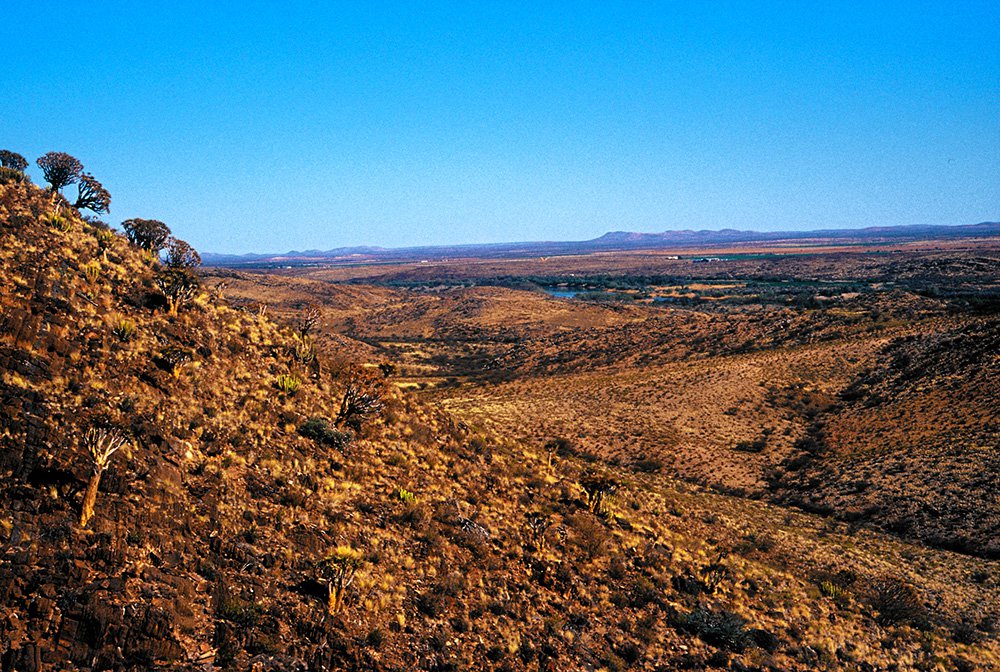 2.55-billion-year-old strata outcropping along the Orange River in South Africa, near where the core sampled in this study was drilled.
Credit: W. Fischer/Caltech
Download Full Image