A team of Caltech scientists has developed a new technique to create super-high-resolution images of genetic activity in cells while the cells are still intact in tissue. This work will enable a better understanding of the genetic programs underlying basic biological functions, such as embryonic development, as well as diseases like cancer.

The work was done in the laboratory of Long Cai, professor of biology and biological engineering and affiliated faculty member of the Tianqiao and Chrissy Chen Institute for Neuroscience at Caltech. A paper describing the research appears online ahead of publication in the journal Nature on March 25.

"This is a general approach," says Cai. "It can be used in studying developmental biology, neuroscience, cancer, immunology, microbiology, and more."

Most cells in the body contain the exact same genome (the genetic blueprint for making an entire organism), but not all cells look and behave the same. This is because cells can turn genes on or off, a process called expression. For example, the genes that a neuron expresses are different from those expressed by a skin cell.

To know which genes are turned on and to what degree, scientists can look at a cell's messenger RNAs, or mRNAs. Collectively called the transcriptome, mRNA molecules are signatures of the genes that are turned on at a given time in the cell.

But while it is useful to know the genes expressed by a single cell, it is also important for studies of biological systems to know how cells interact with and influence their neighbors. For example, a cell located directly next to a cancerous cell will receive different chemical signals and behave differently than a cell elsewhere in the body. Thus, it is desirable to know the transcriptomes of cells while also preserving their positions, or spatial integrity, relative to one another.

The Cai laboratory has now developed a technique that can do exactly that and with high accuracy and at genome-scale coverage.

"We now have an independent in situ discovery tool," says graduate student Chee-Huat Linus Eng, the study's first author. "This is exciting because, previously, imaging methods required prior knowledge obtained from technology that required dissociating cells from their original tissue. But now anyone without any prior knowledge of a biological system can directly profile distinct cell types and identify their neighbor-specific gene expression with spatial information preserved."

To understand the new technique, think of looking at the earth from space, and imagine that every person carries a glowing beacon. From that vantage point, it would be very difficult to distinguish people who are standing close together—their beacon lights would blur into one. But, if only some people turned their lights on at once, then you could take multiple images showing different sets of lights. Combining these images would provide a full picture of the earth and the location of people on it.

Looking at mRNAs with a microscope is a bit like trying to make out individual people on Earth from space. The Cai laboratory's technique, called seqFISH+ (sequential fluorescence in situ hybridization), involves tagging each of the mRNAs in a cell with a unique barcode attached to a fluorescent compound. Over sequential rounds, different barcodes are illuminated, creating many different "pseudocolor" images of the same cell. In this way, researchers can identify tens of thousands of unique mRNA molecules even with a limited palette of fluorescent colors. These images can be combined together to create an image with what the Cai lab calls "super-resolution."

Existing similar imaging methods require researchers to know which genes they are looking for in order to map the cell types. Due to its ability to cover the entire transcriptome, seqFISH+ can be used to look at virtually any kind of tissue type—from complex webs of neurons to cancerous tumors—without needing to preselect genes. This is critical, as the technique can now be used not only to take high-resolution images but also to make novel discoveries from those images. 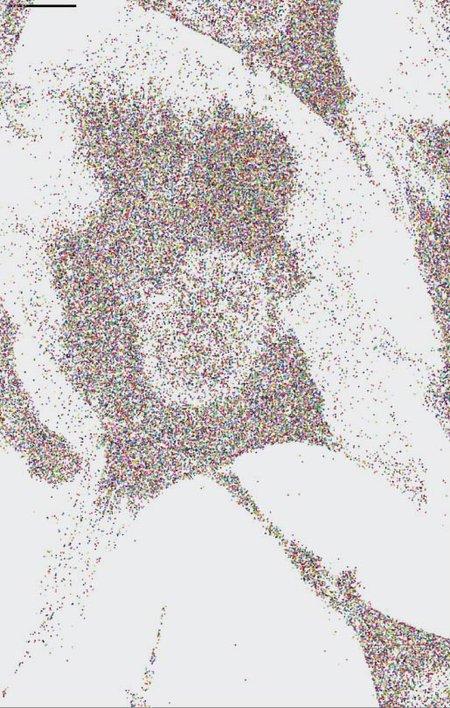 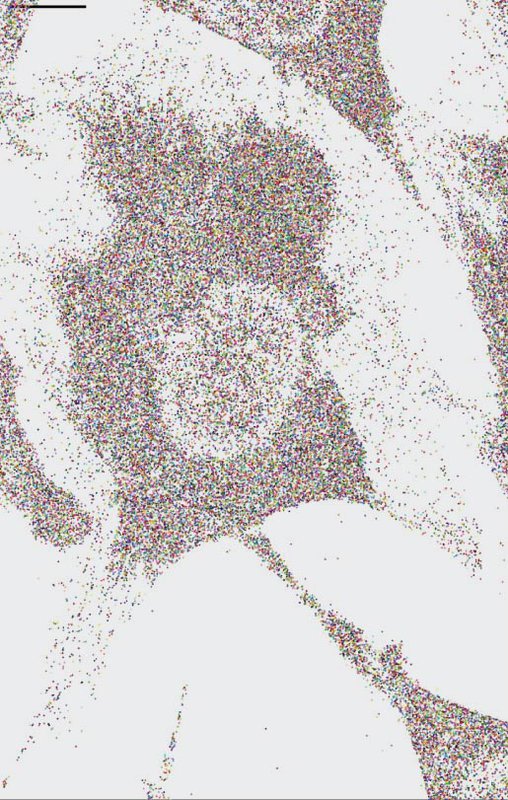