The genes that code for proteins—more than 20,000 in total—make up only about 1 percent of the complete human genome. That entire thing—not just the genes, but also genetic junk and all the rest—is coiled and folded up in any number of ways within the nucleus of each of our cells. Think, then, of the challenge that a protein or other molecule, like RNA, faces when searching through that material to locate a target gene.

Now a team of researchers led by newly arrived biologist Mitchell Guttman of the California Institute of Technology (Caltech) and Kathrin Plath of UCLA, has figured out how some RNA molecules take advantage of their position within the three-dimensional mishmash of genomic material to home in on targets. The research appears in the current issue of Science Express.

The findings suggest a unique role for a class of RNAs, called lncRNAs, which Guttman and his colleagues at the Broad Institute of MIT and Harvard first characterized in 2009. Until then, these lncRNAs—short for long, noncoding RNAs and pronounced "link RNAs"—had been largely overlooked because they lie in between the genes that code for proteins. Guttman and others have since shown that lncRNAs scaffold, or bring together and organize, key proteins involved in the packaging of genetic information to regulate gene expression—controlling cell fate in some stem cells, for example.

In the new work, the researchers found that lncRNAs can easily locate and bind to nearby genes. Then, with the help of proteins that reorganize genetic material, the molecules can pull in additional related genes and move to new sites, building up a "compartment" where many genes can be regulated all at once.

"You can now think about these lncRNAs as a way to bring together genes that are needed for common function into a single physical region and then regulate them as a set, rather than individually," Guttman says. "They are not just scaffolds of proteins but actual organizers of genes."

The new work focused on Xist, a lncRNA molecule that has long been known to be involved in turning off one of the two X chromosomes in female mammals (something that must happen in order for the genome to function properly). Quite a bit has been uncovered about how Xist achieves this silencing act. We know, for example, that it binds to the X chromosome; that it recruits a chromatin regulator to help it organize and modify the structure of the chromatin; and that certain distinct regions of the RNA are necessary to do all of this work. Despite this knowledge, it had been unknown at the molecular level how Xist actually finds its targets and spreads across the X chromosome.

To gain insight into that process, Guttman and his colleagues at the Broad Institute developed a method called RNA Antisense Purification (RAP) that, by sequencing DNA at high resolution, gave them a way to map out exactly where different lncRNAs go. Then, working with Plath's group at UCLA, they used their method to watch in high resolution as Xist was activated in undifferentiated mouse stem cells, and the process of X-chromosome silencing proceeded.

"That's where this got really surprising," Guttman says. "It wasn't that somehow this RNA just went everywhere, searching for its target. There was some method to its madness. It was clear that this RNA actually used its positional information to find things that were very far away from it in genome space, but all of those genes that it went to were really close to it in three-dimensional space."

Before Xist is activated, X-chromosome genes are all spread out. But, the researchers found, once Xist is turned on, it quickly pulls in genes, forming a cloud. "And it's not just that the expression levels of Xist get higher and higher," Guttman says. "It's that Xist brings in all of these related genes into a physical nuclear structure. All of these genes then occupy a single territory."

The researchers found that a specific region of Xist, known as the A-repeat domain, that is known to be vital for the lncRNA's ability to silence X-chromosome genes is also needed to pull in all the genes that it needs to silence. When the researchers deleted the domain, the X chromosome did not become inactivated, because the silencing compartment did not form.

One of the most exciting aspects of the new research, Guttman says, is that it has implications beyond just explaining how Xist works. "In our paper, we talk a lot about Xist, but these results are likely to be general to other lncRNAs," he says. He adds that the work provides one of the first direct pieces of evidence to explain what makes lncRNAs special. "LncRNAs, unlike proteins, really can use their genomic information—their context, their location—to act, to bring together targets," he says. "That makes them quite unique."

The new paper is titled "The Xist lncRNA exploits three-dimensional genome architecture to spread across the X-chromosome." Along with Guttman and Plath, additional coauthors are Jesse M. Engreitz, Patrick McDonel, Alexander Shishkin, Klara Sirokman, Christine Surka, Sabah Kadri, Jeffrey Xing, Along Goren, and Eric Lander of the Broad Institute of Harvard and MIT; as well as Amy Pandya-Jones of UCLA. The work was funded by an NIH Director's Early Independence Award, the National Human Genome Research Institute Centers of Excellence in Genomic Sciences, the California Institute for Regenerative Medicine, and funds from the Broad Institute and from UCLA's Eli and Edythe Broad Center for Regenerative Medicine and Stem Cell Research. 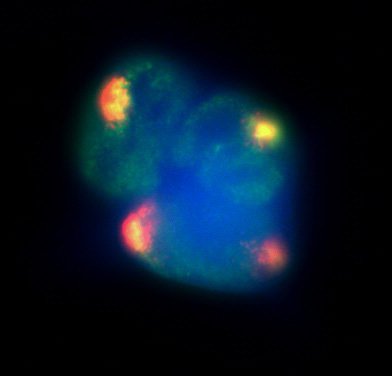