The earth's global magnetic field plays a vital role in our everyday lives, shielding us from harmful solar radiation. The magnetic field, which has existed for billions of years, is caused by a dynamo—or generator—within the mostly molten iron in the earth's interior; this liquid iron churns in a process called convection. But convection does not happen on its own. It needs a driving force—a power source. Now, graduate student Joseph O'Rourke and David Stevenson, Caltech's Marvin L. Goldberger Professor of Planetary Science, have proposed a new mechanism that can power this convection in the earth's interior for all of the earth's history.

A paper detailing the findings appears in the January 21 issue of Nature.

Convection can be seen in such everyday phenomena as a pot of boiling water. Heat at the bottom of the pot causes pockets of fluid to become less dense than the surrounding fluid, and thus to rise. When they reach the surface, the pockets of fluid cool and sink again. This same process occurs in the 1,400-mile-thick layer of molten metal that makes up the outer core.

The earth consists mostly of the mantle (solid material made of oxides and silicate in which magnesium is prominent) and the core (mainly iron). These two regions are usually thought of as completely separated; that is, the mantle materials do not dissolve in the core materials. They do not mix at the atomic level, much as water does not usually mix with oil. The core has a solid inner part that has been slowly growing throughout the earth's history, as liquid iron in the planet's interior solidifies. The outer, liquid part of the core is a layer of molten iron mixed with other elements, including silicon, oxygen, nickel, and a small amount of magnesium. Stevenson and O'Rourke propose that the transfer of the element magnesium in the form of mantle minerals from the outer core to the base of the mantle is the mechanism that powers convection.

Magneisum is a major element in the mantle, but it has low solubility in the iron core except at very high temperatures—above 7,200 degrees Fahrenheit. As the earth's core cools, magnesium oxides and magnesium silicates crystallize from the metallic, liquid outer core, much as sugar that has been dissolved in hot water will precipitate as sugar crystals when the water cools. Because these crystals are less dense than iron, they rise to the base of the mantle. The heavier liquid metal left behind then sinks, and this motion, Stevenson argues, may be the mechanism that has sustained convection for over three billion years—the mechanism that in turn powers the global magnetic field.

"Precipitation of magnesium-bearing minerals from the outer core is 10 times more effective at driving convection than growth of the inner core," O'Rourke says. "Such minerals are very buoyant and the resulting fluid motions can transport heat effectively. The core only needs to precipitate upwards a layer of magnesium minerals 10 kilometers thick—which seems like a lot, but it's not much on the scale of the inner and outer cores—in order to drive the outer core's convection."

Previous models assumed that the steady cooling of iron in the inner core would release heat that could power convection. But most measurements and theory in the past few years for the thermal conductivity of iron—the property that determines how efficiently heat can flow through a metal—indicates that the metal can easily transfer heat without undergoing motion. "Heating up iron at the bottom of the outer core will not cause it to rise up buoyantly—it's just going to dissipate the heat to its surroundings," O'Rourke says.

"Dave had the idea of a magnesium-powered dynamo for a while, but there was supposed to be no magnesium in Earth's core," O'Rourke says. "Now, models of planetary formation in the early solar system are showing that Earth underwent frequent impacts with giant planetary bodies. If these violent, energetic events occurred, Earth would have been experiencing much higher temperatures during its formation than previously thought—temperatures that would have been high enough to allow some magnesium to mix into liquid metallic iron."

These models made it possible to pursue the idea that the dynamo may be powered by the precipitation of magnesium-bearing minerals. O'Rourke calculated that the amounts of magnesium that would have dissolved in the core during Earth's hot early stages would have caused other changes in the composition of the mantle that are consistent with other models and measurements. He also calculated that the precipitation of these magnesium minerals would have enough energy to power the dynamo for four billion years.

Experimental verification of the amount of magnesium that can go into the core is still sparse, O'Rourke and Stevenson say. "Further applications of our proposed mechanism include Venus—where there is no magnetic field—and the abundant exoplanets that are more massive than the Earth but may have similar chemical compositions," Stevenson says. 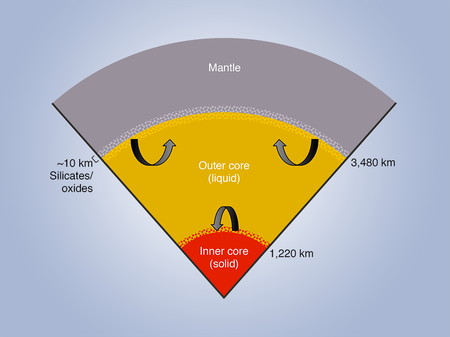 Magnesium-bearing minerals transported through the core up to the mantle can cause the convection that powers the geodynamo. Credit: Joseph O'Rourke/Caltech
Image Lightbox 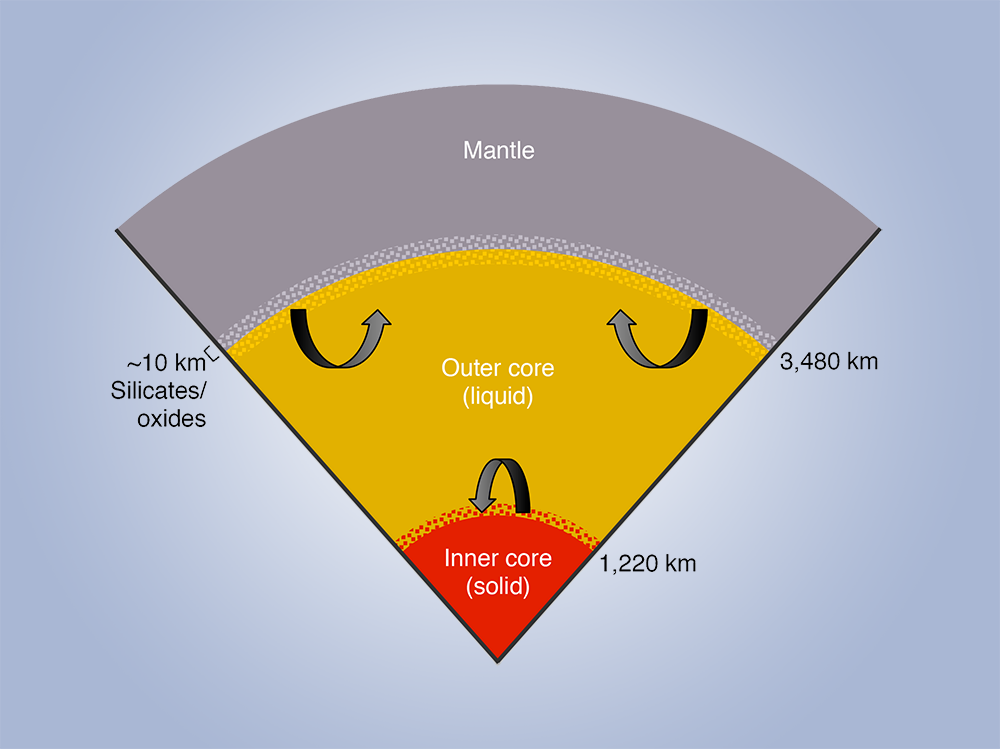 Magnesium-bearing minerals transported through the core up to the mantle can cause the convection that powers the geodynamo.
Credit: Joseph O'Rourke/Caltech
Download Full Image
Subscribe
The Caltech Weekly