The search for gravitational waves—elusive ripples in the fabric of space-time predicted to arise from extremely energetic and large-scale cosmic events such as the collisions of neutron stars and black holes—has expanded, thanks to a $14.5-million, five-year award from the National Science Foundation for the creation and operation of a multi-institution Physics Frontiers Center (PFC) called the North American Nanohertz Observatory for Gravitational Waves (NANOGrav).

The NANOGrav PFC will be directed by Xavier Siemens, a physicist at the University of Wisconsin–Milwaukee and the principal investigator for the project, and will fund the NANOGrav research activities of 55 scientists and students distributed across the 15-institution collaboration, including the work of four Caltech/JPL scientists—Senior Faculty Associate Curt Cutler; Visiting Associates Joseph Lazio and Michele Vallisneri; and Walid Majid, a visiting associate at Caltech and a JPL research scientist—as well as two new postdoctoral fellows at Caltech to be supported by the PFC funds. JPL is managed by Caltech for NASA.

"Caltech has a long tradition of leadership in both the theoretical prediction of sources of gravitational waves and experimental searches for them," says Sterl Phinney, professor of theoretical astrophysics and executive officer for astronomy in the Division of Physics, Mathematics and Astronomy. "This ranges from waves created during the inflation of the early universe, which have periods of billions of years; to waves from supermassive black hole binaries in the nuclei of galaxies, with periods of years; to a multitude of sources with periods of minutes to hours; to the final inspiraling of neutron stars and stellar mass black holes, which create gravitational waves with periods less than a tenth of a second."

The detection of the high-frequency gravitational waves created in this last set of events is a central goal of Advanced LIGO (the next-generation Laser Interferometry Gravitational-Wave Observatory), scheduled to begin operation later in 2015. LIGO and Advanced LIGO, funded by NSF, are comanaged by Caltech and MIT.

"This new Physics Frontier Center is a significant boost to what has long been the dark horse in the exploration of the spectrum of gravitational waves: low-frequency gravitational waves," Phinney says. These gravitational waves are predicted to have such a long wavelength—significantly larger than our solar system—that we cannot build a detector large enough to observe them. Fortunately, the universe itself has created its own detection tool, millisecond pulsars—the rapidly spinning, superdense remains of massive stars that have exploded as supernovas. These ultrastable stars appear to "tick" every time their beamed emissions sweep past Earth like a lighthouse beacon. Gravitational waves may be detected in the small but perceptible fluctuations—a few tens of nanoseconds over five or more years—they cause in the measured arrival times at Earth of radio pulses from these millisecond pulsars.

NANOGrav makes use of the Arecibo Observatory in Puerto Rico and the National Radio Astronomy Observatory's Green Bank Telescope (GBT), and will obtain other data from telescopes in Europe, Australia, and Canada. The team of researchers at Caltech will lead NANOGrav's efforts to develop the approaches and algorithms for extracting the weak gravitational-wave signals from the minute changes in the arrival times of pulses from radio pulsars that are observed regularly by these instruments. 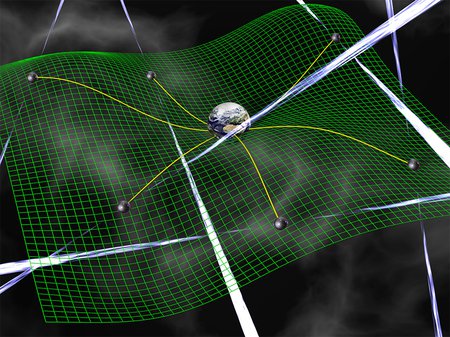 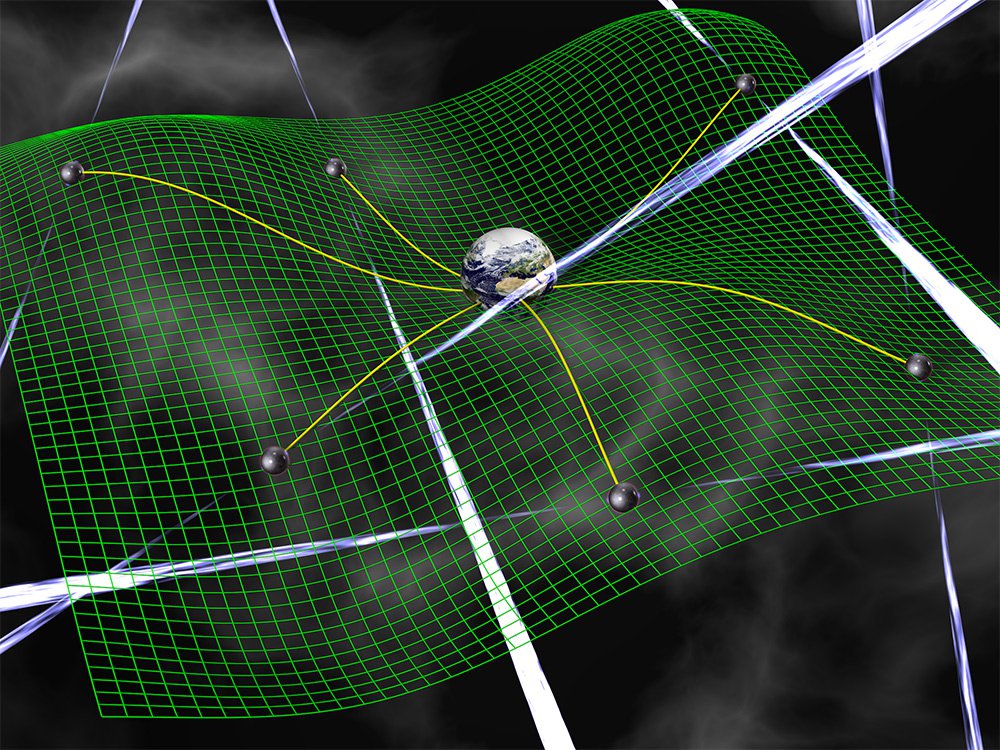 Gravitational waves are ripples in space-time (represented by the green grid) produced by interacting supermassive black holes in distant galaxies. As these waves wash over the Milky Way, they cause minute yet measurable changes in the arrival times at Earth of the radio signals from pulsars, the Universe's most stable natural clocks. These telltale changes can be detected by sensitive radio telescopes, like the Arecibo Observatory in Puerto Rico and the Green Bank Telescope in West Virginia.
Credit: David Champion
Download Full Image
Subscribe
The Caltech Weekly