One day while casually reading a review article, Caltech chemical engineer Mikhail Shapiro came across a mention of gas vesicles—tiny gas-filled structures used by some photosynthetic microorganisms to control buoyancy. It was a light-bulb moment. Shapiro is always on the lookout for new ways to enhance imaging techniques such as ultrasound or MRI, and the natural nanostructures seemed to be just the ticket to improve ultrasound imaging agents.

Now Shapiro and his colleagues from UC Berkeley and the University of Toronto have shown that these gas vesicles, isolated from bacteria and from archaea (a separate lineage of single-celled organisms), can indeed be used for ultrasound imaging. The vesicles could one day help track and reveal the growth, migration, and activity of a variety of cell types—from neurons to tumor cells—using noninvasive ultrasound, one of the most widely used imaging modalities in biomedicine.

A paper describing the work appears as an advance online publication in the journal Nature Nanotechnology.

"People have struggled to make synthetic nanoscale imaging agents for ultrasound for many years," says Shapiro. "To me, it's quite amazing that we can borrow something that nature has evolved for a completely different purpose and use it for in vivo ultrasound imaging. It shows just how much nature has to offer us as engineers."

Ultrasound transmitters use sound waves to image biological tissue. When the emitted waves encounter something of a different density or stiffness, such as bone, some of the sound bounces back to the transducer. By measuring how long that round-trip journey takes, the system can determine how deep the object is and build up a picture of internal anatomy.

But what if you want to image something other than anatomy? Maybe you are interested in blood flow and want to see whether there are any signs of atherosclerosis, for example, in blood vessels. To make ultrasound useful in such cases, you need to introduce an imaging label that has a different density or stiffness from bodily tissue. Currently, people use microbubbles—small synthetic bubbles of gas with a lipid or protein shell—to image the vasculature. These microbubbles are less dense and more elastic than the water-based tissues of the body. As a result, they resonate and scatter sound waves, allowing ultrasound to visualize the location of the microbubbles.

A number of research teams have tried, without success, to make microbubbles smaller. There is a fundamental physical reason for their failure: bubbles are held together by surface tension. As you make them smaller, the surface tension builds, and the pressure within the bubble becomes too high in comparison to the pressure outside. That amounts to an unstable bubble that is likely to lose its gas to its surroundings.

The gas vesicles Shapiro's team worked with are at least an order of magnitude smaller than microbubbles—measuring just tens to hundreds of nanometers in diameter. And even though they look like bubbles, gas vesicles behave quite differently. Unlike bubbles, the vesicles do not trap gas molecules but allow them to pass freely in and out. Instead, they exclude water from their interior by having a hydrophobic inner surface. This results in a fundamentally stable nanoscale configuration.

"As soon as I learned about them, I knew we had to try them," Shapiro says.

Shapiro's long-term goal is to take advantage of the fact that the gas vesicles are genetically encoded by engineering their properties at the DNA level and ultimately introducing the genes into mammalian cells to produce the structures themselves. For example, he would like to genetically label stem cells and use ultrasound to watch as they migrate to specific locations within the body and differentiate into tissues.

"Now that we have our hands on the genes that encode these gas vesicles, we can engineer them to optimize their properties, to see how far they can go," Shapiro says.

In their work, the researchers found differences in the gas vesicles produced by Ana and Halo. These variations could provide insight into how the vesicle design could be optimized for other purposes. For example, unlike the Ana vesicles, the Halo vesicles produced harmonic signals—meaning that they caused the original ultrasound wave to come back, as well as waves with doubled and tripled frequencies. Harmonics can be helpful in imaging because most tissue does not produce such signals; so when they show up, researchers know that they are more likely to be coming from the imaging agent than from the tissue.

Also, the gas vesicles from the two species collapsed, and thereby became invisible to ultrasound, with the application of different levels of pressure. Halo gas vesicles, which evolved in unpressurized cells, collapsed more easily than the vesicles from Ana, which maintain a pressurized cytoplasm. The researchers used this fact to distinguish the two different populations in a mixed sample. By applying a pressure pulse sufficient to collapse only the Halo vesicles, they were able to identify the remaining gas vesicles as having come from Ana.

Shapiro notes that there is a substantial difference between the critical collapse pressures of Halo and Ana. "There's quite a good possibility that, as we start to genetically engineer these nanostructures, we would be able to make new ones with intermediate collapse pressures," he says. "That would allow you to image a greater number of cells at the same time. This sort of multiplexing is done all the time in fluorescent imaging, and now we want to do it with ultrasound."

Along with Shapiro, coauthors on the paper, "Biogenic gas nanostructures as ultrasonic molecular reporters," are Patrick Goodwill, Arkosnato Neogy, David Schaffer, and Steven Conolly of UC Berkeley, and Melissa Yin and F. Stuart Foster of the University of Toronto. The work was supported by funding from the Miller Research Institute, the Burroughs Wellcome Fund's Career Award at the Scientific Interface, the California Institute of Regenerative Medicine, the National Institutes of Health, the Canadian Institutes of Health Research, and the Terry Fox Foundation. 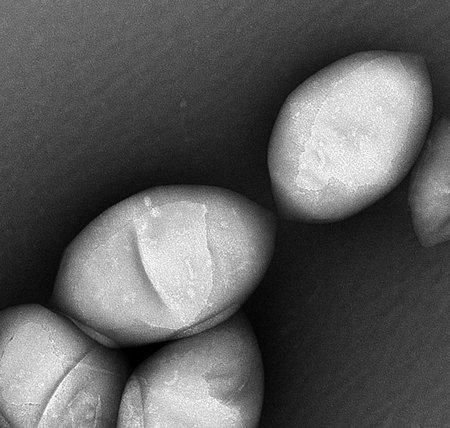 TEM image of gas vesicles in Halobacterium NRC-1. Shapiro and his colleagues have shown that these natural nano structures can be used as ultrasound imaging agents. Credit: Mikhail Shapiro/Caltech
Image Lightbox 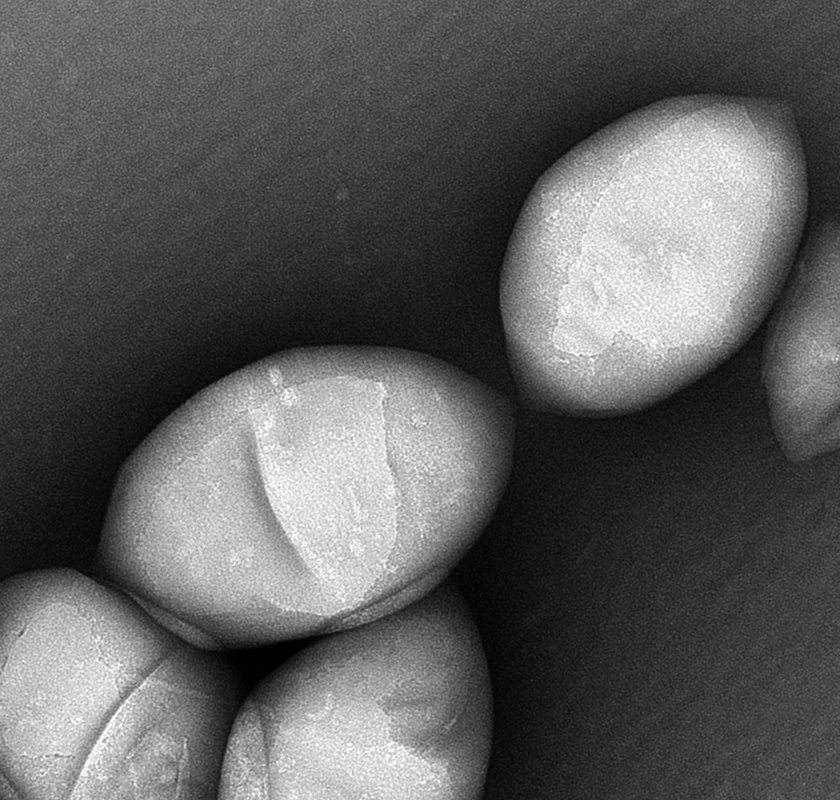 TEM image of gas vesicles in Halobacterium NRC-1. Shapiro and his colleagues have shown that these natural nano structures can be used as ultrasound imaging agents.
Credit: Mikhail Shapiro/Caltech
Download Full Image
Subscribe
The Caltech Weekly