Revealing the architecture of embryos at a crucial stage in development

The majority of pregnancies that fail do so at a very early developmental stage, before the pregnancy is even detectable by tests. This critical stage, occurring about a week after fertilization, is when an embryo implants itself into the uterus and begins to grow in a complex manner. Now, using mouse embryos, Caltech researchers have new insights into the embryo's architecture and the structures that enable proper development at this stage.

The work gives clues toward understanding why some human pregnancies fail at a very early stage.

The research was done in the laboratory of Magdalena Zernicka-Goetz, Bren Professor of Biology and Biological Engineering. A paper describing the study appears in the May 6 issue of the journal Nature. Zernicka-Goetz is an affiliated faculty member with the Tianqiao and Chrissy Chen Institute for Neuroscience at Caltech.

Upon implantation into the uterus, a developing mouse embryo changes shape from a sphere into an elongated cup. Constraining the shape of the cup is a rigid membrane, called the basement membrane, which is produced by one of the cell layers. But this has raised questions for researchers: If the embryo is surrounded by a rigid membrane, how can it possibly grow?

When examining these embryos with a technique called high-resolution confocal microscopy, Zernicka-Goetz's team discovered tiny perforations in the basement membrane. The tiny holes only appeared in a part of the embryo that undergoes rapid growth at that stage, which convinced the researchers that the holes could not be a by-product, or artifact, of the microscopy technique. The team discovered that the holes were actually necessary for the growth. The holes served to loosen the hold of the constricting basement membrane, allowing the embryo to grow larger.

The researchers then discovered that the positions of the holes change over time. By day six of development in the mouse embryo, the holes have concentrated to one side of the elongated shape. This side, called the primitive streak, is where the mouse embryo "breaks symmetry" and begins to form a line of cells that will become the long axis, from head to tail, of the developing body. This is a crucial moment in development. The team found that as this streak of cells develops, it secretes an enzyme that causes more holes to form in the underlying basement membrane. These holes not only allow localized growth but also act like portals for cells to travel through as they migrate to form the body.

"This work on mouse embryos should help us reveal whether the same mechanism operates in human embryos to allow them to grow and thrive upon implantation when far too many of human embryos fail," says Zernicka-Goetz.

The paper is titled"Basement membrane remodelling regulates mouse embryogenesis." Christos Kyprianou and Neophytos Christodoulou both of the University of Cambridge are the study's first authors. In addition to Zernicka-Goetz, co-authors are Russell Hamilton and Gianluca Amadei of the University of Cambridge; and Wallis Nahaboo, Diana Suarez Boomgaard, and Isabelle Migeotte of Université Libre de Bruxelles. Funding was provided by the Fonds de la Recherche Scientifique, Walloon Excellence in Life sciences and BIOtechnology, the European Research Council, and the Wellcome Trust. 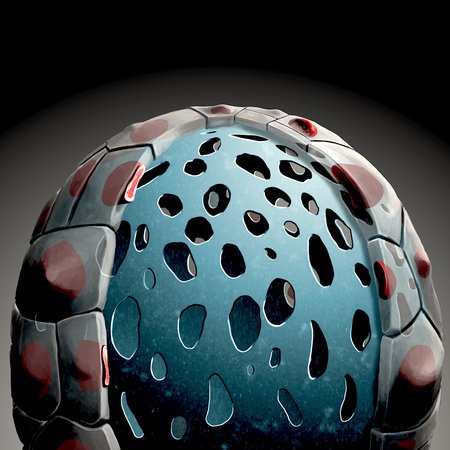 Illustration of an embryonic basement membrane, colored in blue. The holes in the membrane are the subject of a new study from the laboratory of Magdalena Zernicka-Goetz. Credit: Andreas Karpasitis
Image Lightbox
Subscribe
The Caltech Weekly