Optical resonators, which circulate and confine light (for instance in lasers), are currently used in a variety of applications of all sizes—from pinpoint light sources smaller than the width of a human hair to kilometer-scale sensing devices such as the Laser Interferometer Gravitational-wave Observatory (LIGO) experiment that detects gravitational waves.

Devices known as optical parametric oscillators are among the widely used nonlinear resonators in optics; they are "nonlinear" in that there is light flowing into the system and light leaking out, but not at the same wavelengths. Though these oscillators are useful in a variety of applications, including in quantum optics experiments, the physics that underpins how their output wavelength, or spectrum, behaves is not well understood.

"When you add strong nonlinearity to resonators, you enter what we call a 'rich physics regime,'" says Alireza Marandi, assistant professor of electrical engineering and applied physics. "'Rich' in physics terms usually means complicated and hard to use, but we need nonlinearities to create useful functionalities such as switching for computing."

To be able to make full use of nonlinear optical resonators, researchers want to be able to understand and model the physics that underpin how they work. To this end, Marandi and his colleagues recently uncovered a potential way to engineer those rich physics, while discovering phase transitions in the light that is generated by the resonators. A paper about their findings was published on February 5 in Nature Communications.

Usually, the term phase transition might make one think of a change in the a physical state of matter; for example, water at atmospheric pressure transitions from a gas to a liquid at 100 degrees Celsius, and from a liquid to a solid (ice) at 0 degrees Celsius. This analogy of an abrupt change in state and behavior at a specific point also helps explain the spectral phase transitions that Marandi and his colleagues have noted in the optical resonators.

In the work, Marandi's team built an optical resonator from optical fiber and a special nonlinear waveguide made of lithium niobate, an artificial salt used in various electronic and optical applications. The nonlinear resonator can generate light that has about twice the wavelength of its input light wavelength. When they precisely tweaked the resonator to different lengths, they found that the spectrum of the generated light experienced abrupt changes at specific lengths, akin to the phase transitions in physical matter.

Their discovery has both fundamental and practical implications. Fundamentally, phase transitions are a well understood and easy-to-model phenomenon, which could help simplify the "rich" physics of nonlinear optical resonators. Practically, they could be used in the construction of sensors. "Phase transitions are useful because they amplify the response you see with just a small change in input," Marandi says. They also have the potential of becoming the "switching mechanism" in future optical computing architectures.

The paper is titled "Spectral Phase Transitions in Optical Parametric Oscillators." Marandi's co-authors are Caltech graduate student Arkadev Roy and postdoctoral scholar Saman Jahani; and Carsten Langrock and Martin Fejer of Stanford University. This research was funded by the Army Research Office and the National Science Foundation, as well as NTT Research Inc.

A nonlinear waveguide used in the experiment. In this case, the waveguide provides the nonlinearity (parametric gain) for the​ light as it circulates through an optical resonator. Engineers at Caltech discovered that they could control phase transitions in the ​spectrum of light generated in the resonator by adjusting the length of the resonator. (Credit: Alireza Marandi/Caltech) 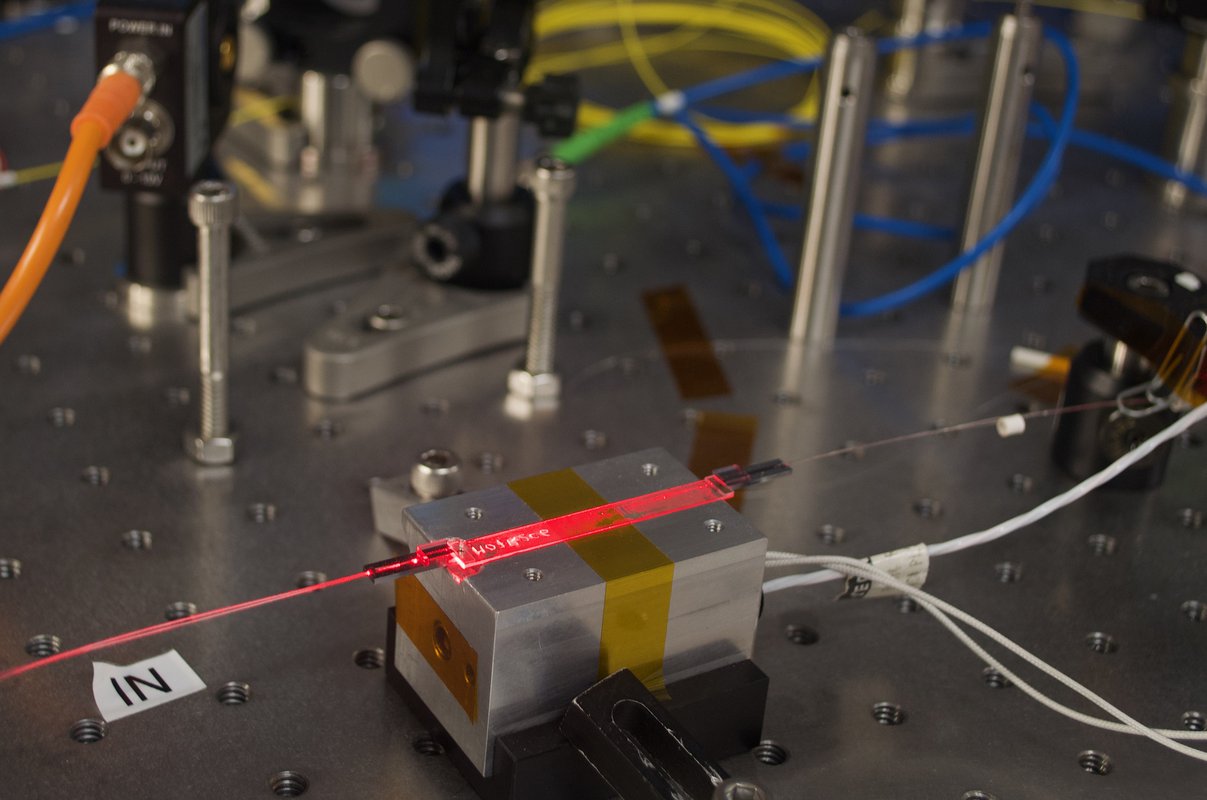 A nonlinear waveguide used in the experiment. In this case, the waveguide provides the nonlinearity (parametric gain) for the​ light as it circulates through an optical resonator. Engineers at Caltech discovered that they could control phase transitions in the ​spectrum of light generated in the resonator by adjusting the length of the resonator.
Credit: Alireza Marandi/Caltech
Download Full Image
Subscribe
The Caltech Weekly