One of the greatest mysteries of experimental physics is how so-called high-temperature superconducting materials work. Despite their name, high-temperature superconductors—materials that carry electrical current with no resistance—operate at chilly temperatures less than minus 135 degrees Celsius. They can be used to make superefficient power cables, medical MRIs, particle accelerators, and other devices. Cracking the mystery of how these materials work could lead to superconducting devices that operate at room temperatures—and could revolutionize electrical devices, including laptops and phones.

In a new paper in the journal Nature Physics, researchers with the Institute for Quantum Information and Matter at Caltech have at last solved one piece of this enduring puzzle. They have confirmed that a transitional phase of matter called the pseudogap—one that occurs before these materials are cooled down to become superconducting—represents a distinct state of matter, with properties very different from those of the superconducting state itself.

When matter transitions from one state, or phase, to another—say, water freezing into ice—there is a change in the ordering pattern of the materials' particles. Physicists previously had detected hints of some type of ordering of electrons inside the pseudogap state. But exactly how they were ordering—and whether that ordering constituted a new state of matter—was unclear until now.

The phenomenon of superconductivity was first discovered in 1911. When certain materials are chilled to super-cold temperatures, as low as a few degrees above absolute zero (a few degrees Kelvin), they carry electrical current with no resistance, so that no heat or energy is lost. In contrast, our laptops are not made of superconducting materials and therefore experience electrical resistance and heat up.

The dance of superconducting electrons

Materials become superconducting when electrons overcome their natural repulsion and form pairs. This pairing can occur under extremely cold temperatures, allowing the electrons, and the electrical currents they carry, to move unencumbered. In conventional superconductors, electron pairing is caused by natural vibrations in the crystal lattice of the superconducting material, which act like glue to hold the pairs together.

But in high-temperature superconductors, this form of "glue" is not strong enough to bind the electron pairs. Researchers think that the pseudogap, and how electrons order themselves in this phase, holds clues about what this glue may constitute for high-temperature superconductors. To study electron ordering in the pseudogap, Hsieh and his team have invented a new laser-based method called nonlinear optical rotational anisotropy. In the method, a laser is pointed at the superconducting material; in this case, crystals of ytttrium barium copper oxide (YBa2Cu3Oy). An analysis of the light reflected back at half the wavelength compared to that going in reveals any symmetry in the arrangement of the electrons in the crystals.

Different phases of matter have distinct symmetries. For example, when water turns into ice, physicists say the symmetry has been "broken."

"In water," Hsieh explains, "the H2O molecules are pretty randomly oriented. If you were swimming in an infinite pool of water, your surroundings look the same no matter where you are. In ice, on the other hand, the H2O molecules form a regular periodic network, so if you imagine yourself submerged in an infinite block of ice, your surroundings appear different depending on whether you are sitting on an H or O atom. Therefore, we say that the translational symmetry of space is broken in going from water to ice."

With the new tool, Hsieh's team was able to show that the electrons cooled to the pseudogap phase broke a specific set of spatial symmetries called inversion and rotational symmetry. "As soon as the system entered the pseudogap region, either as a function of temperature or the amount of oxygen in the compound, there was a loss of inversion and rotational symmetries, clearly indicating a transition into a new phase of matter," says Liuyan Zhao, a postdoctoral scholar in the Hsieh lab and lead author of the new study. "It is exciting that we are using a new technology to solve an old problem."

"The discovery of broken inversion and rotational symmetries in the pseudogap drastically narrows down the set of possibilities for how the electrons are self-organizing in this phase," says Hsieh. "In some ways, this unusual phase may turn out to be the most interesting aspect of these superconducting materials."

With one piece of the puzzle solved, the researchers are on to the next. They want to know what role this ordering of electrons in the pseudogap plays in inducing high-temperature superconductivity—and how to make it happen at even higher temperatures.

The Nature Physics study, entitled "A global-inversion-symmetry-broken phase inside the pseudogap region of YBa2Cu3Oy," was funded by the Army Research Office, the National Science Foundation, the Gordon and Betty Moore Foundation, the Canadian Institute for Advanced Research, and the Natural Sciences and Engineering Research Council. Other authors are C. A. Belvin of Wellesley College, Massachusetts; R. Liang, D.A. Bonn, and W.N. Hardy of the University of British Columbia, Vancouver; and N.P. Armitage of The Johns Hopkins University, Baltimore. 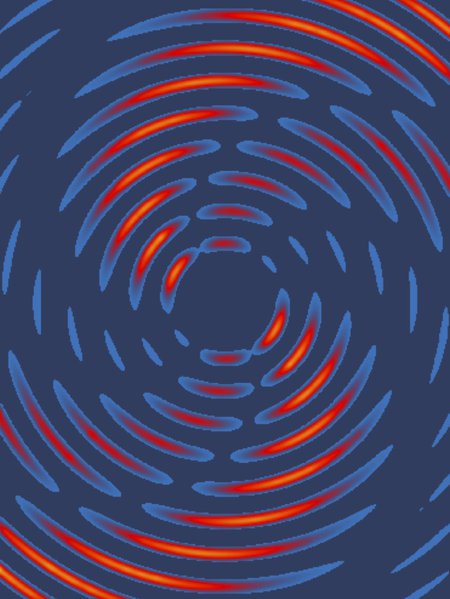 An artistic representation of the data showing the breaking of spatial inversion and rotational symmetries in the pseudogap region of superconducting materials—evidence that the pseudogap is a distinct phase of matter. Rings of light reflected from a superconductor reveal the broken symmetries. Credit: Hsieh Lab/Caltech 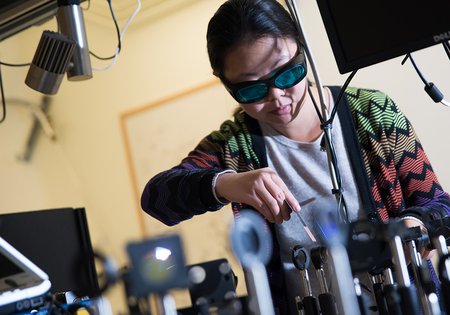 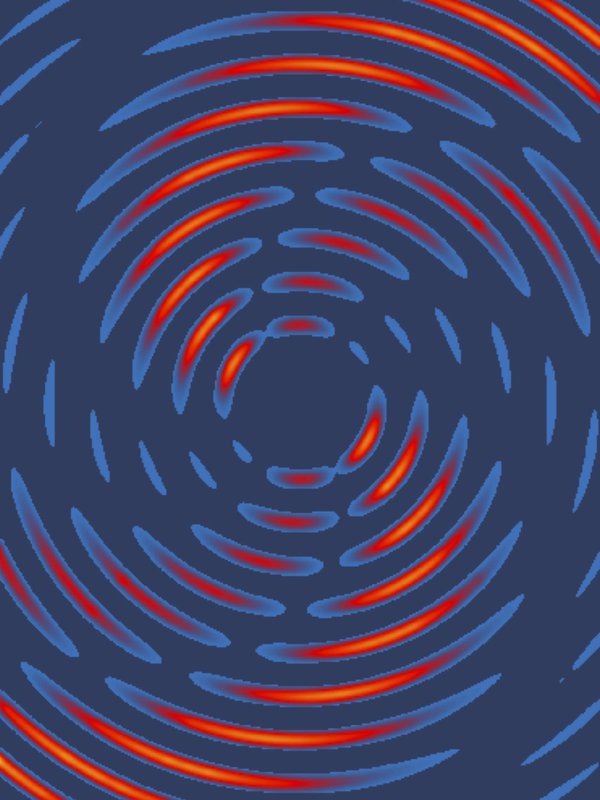 An artistic representation of the data showing the breaking of spatial inversion and rotational symmetries in the pseudogap region of superconducting materials—evidence that the pseudogap is a distinct phase of matter. Rings of light reflected from a superconductor reveal the broken symmetries.
Credit: Hsieh Lab/Caltech
Download Full Image 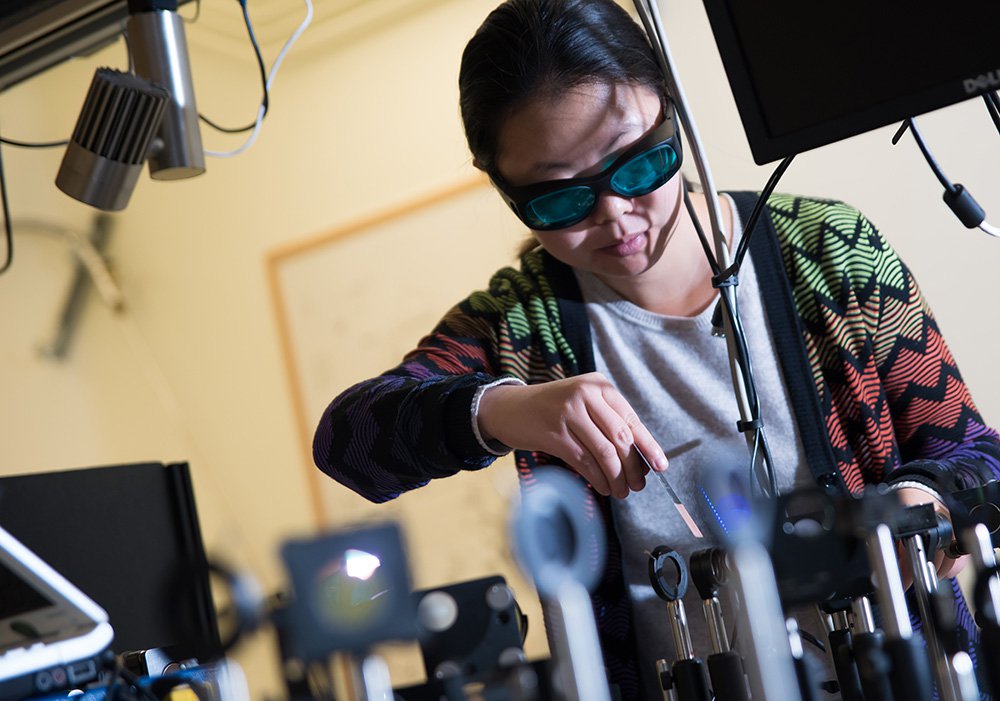