Applied scientists led by Caltech's Kerry Vahala have discovered a new type of optical soliton wave that travels in the wake of other soliton waves, hitching a ride on and feeding off of the energy of the other wave.

Solitons are localized waves that act like particles: as they travel across space, they hold their shape and form rather than dispersing as other waves do. They were first discovered in 1834 when Scottish engineer John Scott Russell noted an unusual wave that formed after the sudden stop of a barge in the Union Canal that runs between Falkirk and Edinburgh. Russell tracked the resulting wave for one or two miles, and noted that it preserved its shape as it traveled, until he ultimately lost sight of it.

He dubbed his discovery a "wave of translation." By the end of the century, the phenomenon had been described mathematically, ultimately giving birth to the concept of the soliton wave. Under normal conditions, waves tend to dissipate as they travel through space. Toss a stone into a pond, and the ripples will slowly die down as they spread out away from the point of impact. Solitons, on the other hand, do not.

In addition to water waves, solitons can occur as light waves. Vahala's team studies light solitons by having them recirculate indefinitely in micrometer-scale circular circuits called optical microcavities. Solitons have applications in the creation of highly accurate optical clocks, and can be used in microwave oscillators that are used for navigation and radar systems, among other things.

But despite decades of study, a soliton has never been observed behaving in a dependent—almost parasitic—manner.

"This new soliton rides along with another soliton—essentially, in the other soliton's wake. It also syphons energy off of the other soliton so that it is self-sustaining. It can eventually grow larger than its host," says Vahala, Ted and Ginger Jenkins Professor of Information Science and Technology and Applied Physics and executive officer for applied physics and materials science in the Division of Engineering and Applied Science.

Vahala likens these newly discovered solitons to pilot fish, carnivorous tropical fish that swim next to a shark so they can pick up scraps from the shark's meals. And by swimming in the shark's wake, the pilot fish reduce the drag of water on their own body, so they can travel with less effort.

Vahala is the corresponding author of a paper in the journal Nature Physics announcing and describing the new type of soliton, dubbed the "Stokes soliton." (The name "Stokes" was chosen for technical reasons having to do with how the soliton syphons energy from the host.) The new soliton was first observed by Caltech graduate students Qi-Fan Yang and Xu Yi. Because of the soliton's ability to closely match the position and shape of the original soliton, Yang's and Yi's initial reaction to the wave was to suspect that laboratory instrumentation was malfunctioning.

"We confirmed that the signal was not an artifact of the instrumentation by observing the signal on two spectrometers. We then knew it was real and had to figure out why a new soliton would spontaneously appear like this," Yang says.

The microcavities that Vahala and his team use include a laser input that provides the solitons with energy. This energy cannot be directly absorbed by the Stokes soliton—the "pilot fish." Instead, the energy is consumed by the "shark" soliton. But then, Vahala and his team found, the energy is pulled away by the pilot fish soliton, which grows in size while the other soliton shrinks.

"Once we understood the environment required to sustain the new soliton, it actually became possible to design the microcavities to guarantee their formation and even their properties like wavelength—effectively, color," Yi says. Yi and Yang collaborated with graduate student Ki Youl Yang on the research.

This work is described in a paper titled "Stokes solitons in optical microcavities," published on September 5. The research was funded by the Defense Advanced Research Projects Agency under the PULSE Program; NASA; the Kavli Nanoscience Institute; and the Institute for Quantum Information and Matter, a National Science Foundation Physics Frontiers Center supported by the Gordon and Betty Moore Foundation. 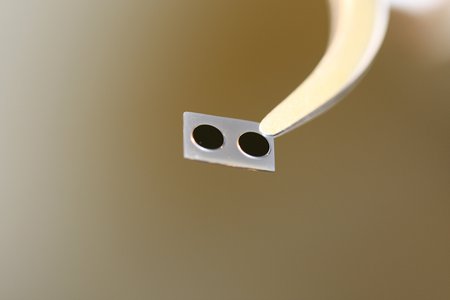 These optical microcavities are where solitons are created. The solitary waves circle around the tiny disks at the speed of light. Credit: Qi-Fan Yang/Caltech
Image Lightbox 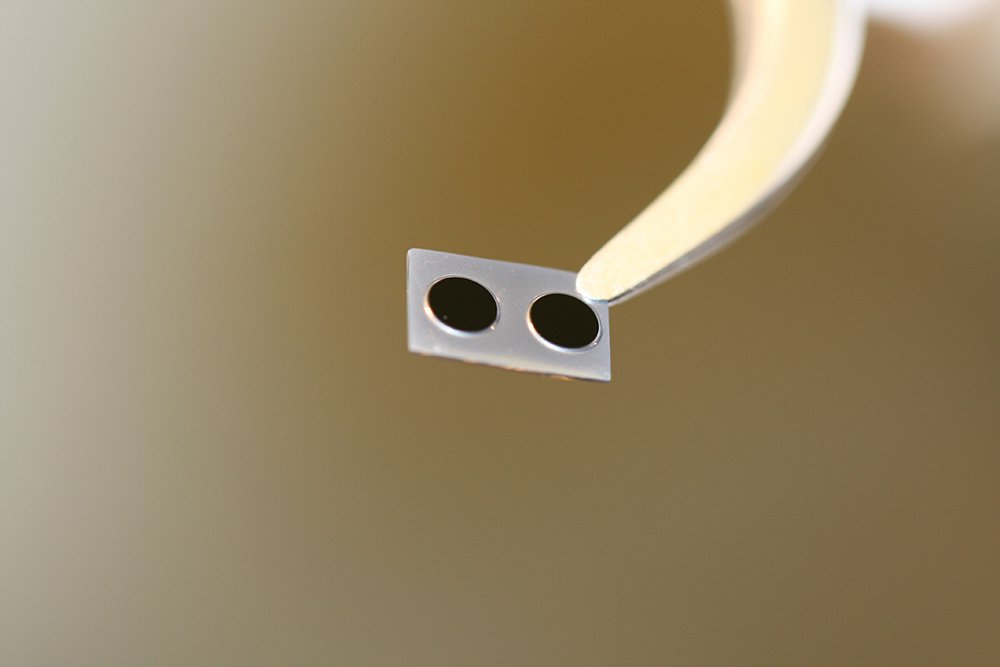 These optical microcavities are where solitons are created. The solitary waves circle around the tiny disks at the speed of light.
Credit: Qi-Fan Yang/Caltech
Download Full Image
Subscribe
The Caltech Weekly