A New Approach to Biology

Why haven't insects multiplied enough to eat all the leaves on every tree—that is, why do trees stay green? How are atoms taken from inorganic materials to make living matter? What is the fastest rate at which a cell can divide?

These are some of the "puzzles" posed to undergraduate students in the introductory course Bi 1: Principles of Biology, taught this year by Rob Phillips, the Fred and Nancy Morris Professor of Biophysics and Biology in the divisions of Engineering and Applied Science and Biology and Biological Engineering.

As part of the Caltech undergraduate core curriculum, every student must fulfill a biology requirement. Many do so by taking Bi 1. The challenge facing Phillips was, in his own words: "What is the best way to teach biology to 220 non-biology majors?"

"I believe the most fascinating subject of our time is the quantitative study of living matter, trying to understand the living part of the world with the same precision as we have understood the inorganic world," he says. "Many students think of biology as a subject that is all about a variety of facts. I reject this viewpoint and in teaching this class I aimed to find an alternative to the 'death by powerpoint' approach."

Instead of a traditional encyclopedic approach where students learn about the broad sweep of facts that have been accumulated about the living world, Phillips decided to focus the course on what he calls the "broad guiding principles of biology," including lectures on biogeography (the study of the geographic distribution of species), the role of predators' ecosystems, evolution, the fossil record, photosynthesis, gene regulation, and how probability informs our understanding of biological mechanisms.

"I wanted to cultivate a sense of wonder," he says. "I want students to be observers of nature, and not necessarily adhere to manmade, artificial divisions of biological topics." Thus, each lecture began with a so-called puzzle. These were not rhetorical questions—they could be solved with techniques from biology, computer science, mathematics, chemistry, and physics. Homework questions were similar, requiring order-of-magnitude calculations made using both data and intuition to solve problems such as "how many sea otters does a killer whale need to eat every day?" to illustrate how keystone species—predators that hold ecosystems together—work.

Students were also encouraged to go outside to observe and reflect on the natural world. While this was not a formal assignment, Phillips suggested that the students think of sentences beginning with "I wonder…" and try to figure out what physical constraints set the scale of different objects in the natural world—such as, what sets the scale of how tall a tree can be, how long it took whales to evolve, or how far a bird can fly without eating.

"I found that doing the actual computations gave me a much more solid understanding of biology than just memorizing facts," says Sophia Coplin, a freshman computer science major. "We were using programming and statistical mechanics and other science to calculate the size of a bacterium, how evolution works, how a cell uses energy on a molecular level—all kinds of things. We were really thinking hard about and solving biological problems."

"I believe that biology is a forum for all scientists," says Phillips, who received an ASCIT (Associated Students of the California Institute of Technology) Teaching Award for his work. "Especially here at Caltech, where we don't steer clear of math and chemistry and physics to solve problems. Many of the greatest problems facing humanity, both in terms of curiosity and in terms of impact on our civilization, have to do with understanding the workings of the living world. Bi 1 as a course has the capacity to bring a huge set of brilliant students into thinking about subjects that they may have thought were not of interest to them." 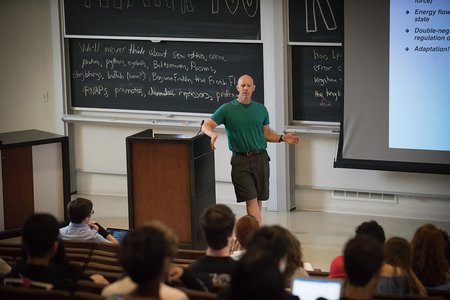 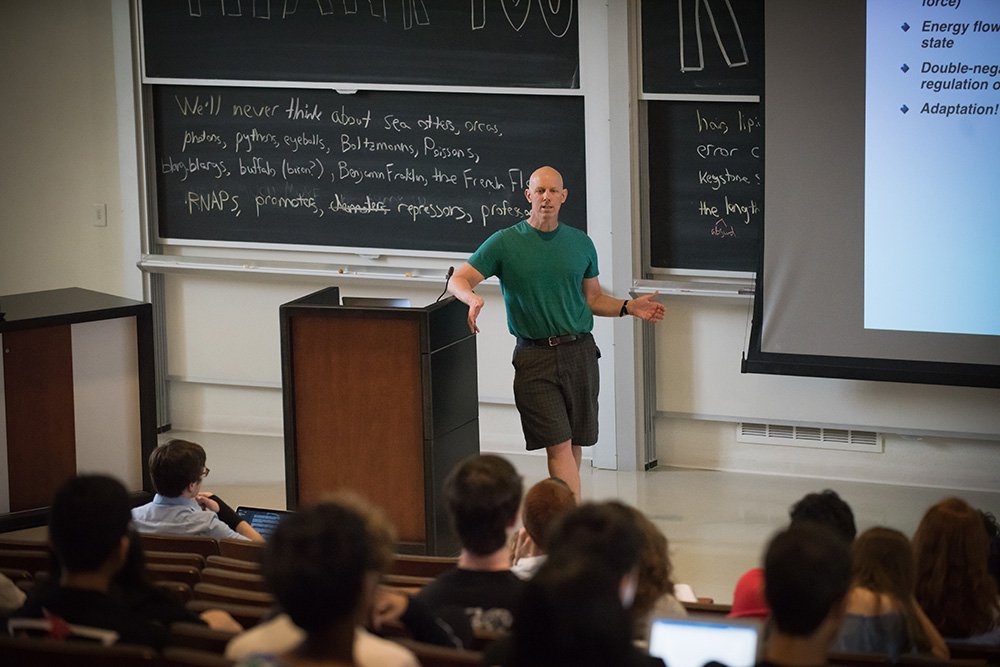 Share this
Tags
biological science & medicine campus events interdisciplinary research student life
Related Links
> In the Light of Evolution   > The Cost of "Living": How Viruses Hijack a Host's Energy Supply   > Problem Solving, One Avocado at a Time
See All News   >