This is a Neuron on Nicotine

When a person takes a puff on a cigarette, nicotine floods into the brain, latching onto receptors on the surface of neurons and producing feelings of happiness. But nicotine does not simply stay on the surface of cells—the drug actually permeates into neural cells and alters them from the inside out. Now, a team of scientists has developed a protein sensor that glows in the presence of nicotine, allowing the researchers to observe nicotine's movements in cells and reveal more about the nature of nicotine addiction.

The work was led by Henry Lester, professor of biology at Caltech and previously a visiting scientist at the Janelia Research Campus of the Howard Hughes Medical Institute (HHMI). A paper describing the research appears online on February 4 in the Journal of General Physiology. Lester is also an affiliated faculty member of the Tianqiao and Chrissy Chen Institute for Neuroscience at Caltech.

The endoplasmic reticulum is the equivalent of a cell's factory and warehouse—the place where proteins are synthesized and packaged in order to be shipped to various other locations both inside and outside of the cell. Nicotinic receptors (nAChRs) are among these proteins; after being manufactured in the endoplasmic reticulum, they then travel to the cell's surface. When nicotine molecules enter the body, they travel through the bloodstream and reach brain cells, where they meet the nAChRs on the surface of these cells. This triggers the cells' processes of releasing chemicals of reward and happiness.

What happens once nicotine has moved into the cells, however, has not been well understood. Lester and others previously found that some nAChRs remain in the "warehouse"—the endoplasmic reticulum—where they, too, can bind to nicotine. Hoping to gain insights into nicotine's effects within cells, Lester and his team developed a tool called a biosensor to visualize where the drug collects inside of cells. The biosensor is composed of a special protein that can open and close, like a Venus flytrap, and an inactivated fluorescent protein. The sensor is designed to close around nicotine, and this then activates the fluorescent protein to glow brightly, indicating where the nicotine molecules are located and how many are present.

Scientists can put the biosensors into particular parts of a cell—in this work, they placed them in the endoplasmic reticulum and on cells' surfaces—and watch them light up as nicotine floods in.

By making movies of cells containing biosensors in a lab dish, the team has discovered that nicotine enters into the endoplasmic reticulum within a few seconds of appearing outside a cell. Furthermore, the nicotine levels are more than enough to affect nAChRs during their assembly and to chaperone additional nAChRs on their journey to the cell surface. As a result, the neurons are more sensitive to the nicotine, which enhances the rewarding feelings after a puff on a tobacco cigarette or an e-cigarette. In other words, the more a person smokes, the more quickly and easily the smoker gets a nicotine buzz. This is part of nicotine addiction.

While the movies now focus on isolated neurons in the lab, the scientists want to determine whether nicotine's intracellular movements are similar in the neurons of live mice. Additionally, they are developing biosensors for other drugs, such as opioids and antidepressants, to observe how these compounds interact inside and outside of cells.

Written by
Lorinda Dajose
Contact
Lori Dajose
(626) 395‑1217
ldajose@caltech.edu
A neuron containing a biosensor developed by the Lester laboratory glows in the presence of varying concentrations of nicotine. Credit: Caltech/Lester Group 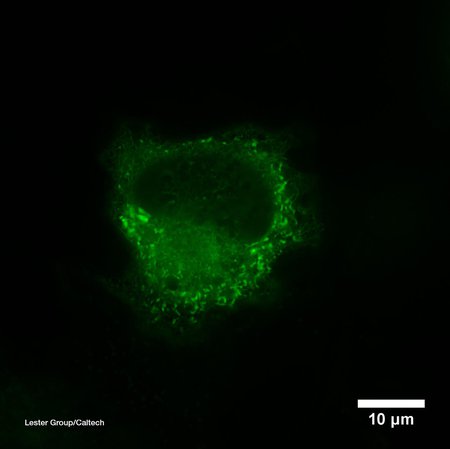 In this image, a biosensor is targeted to a cell's endoplasmic reticulum and glows green in the presence of nicotine Credit: Lester Group
Image Lightbox 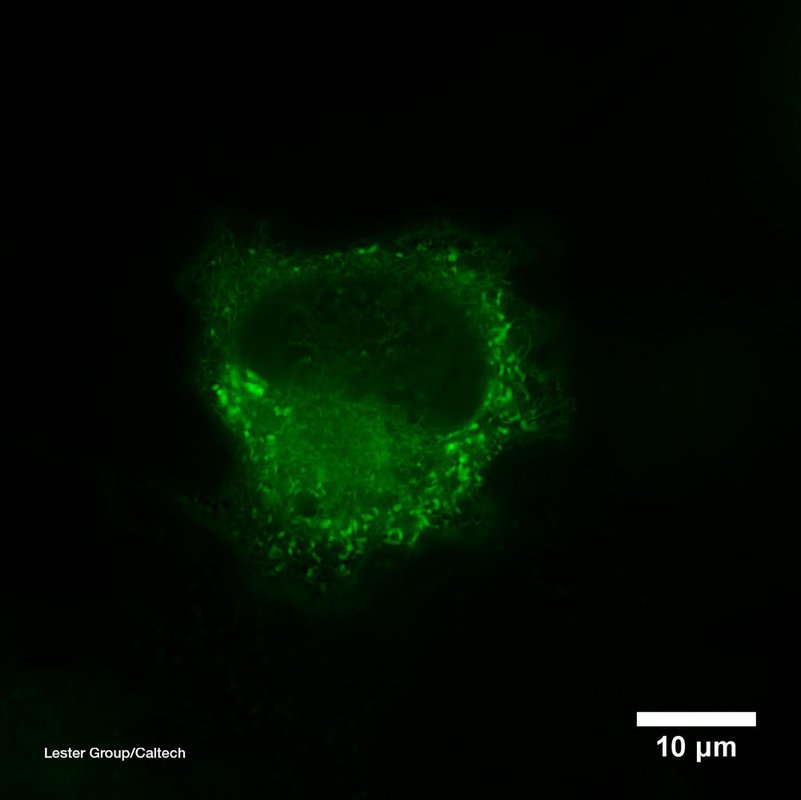 In this image, a biosensor is targeted to a cell's endoplasmic reticulum and glows green in the presence of nicotine
Credit: Lester Group
Download Full Image
Subscribe
The Caltech Weekly